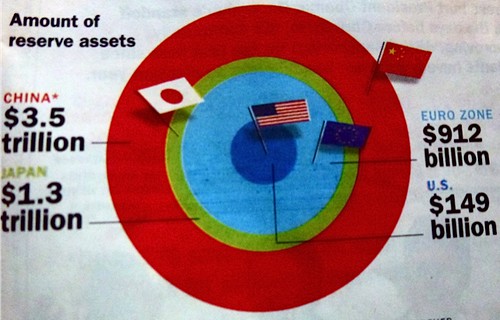 Photo from Time Magazine article about China and Japan trading their currencies directly rather than through the US dollar..

There is a well know saying “follow the money”.  In investing this is normally not true.  Wise investors invest where a lack of money creates value.

Now investor sentiment has changed. Modern communications provide more data about emerging markets. Investors have more confidence. In addition investors…. with great reason have lost confidence in major markets.  This is not surprising with the recent sovereign debt downgrades. Some major nations debt is now in junk status.  This has created great value in major markets.  European shares especially are oversold because of the euro worries.

Demographics in the USA favor the U.S. over nearly every other rich country n the world.  Four million people reach 21 years old each year and this will eventually return home building to its previous million houses a year (right now under 700,000).  With corporate American so lean and inventories so low… growth is very likely to set in.  The creates great value in the US now.   See more on major market values here.

The second story relates to China.  China’s expansion will be an engine that will help run the global economy in to the next decade.

Recently Japan and China have agreed to promote direct trading of the yen and yuan without using dollars. This will encourage the development of a market for companies involved in the exchanges and help Chinese-Japanese trade because direct yen- yuan settlement should reduce currency risks and trading costs.

Japan will also apply to buy Chinese bonds next year, allowing the investment of renminbi to leave China during the transaction., the Japanese and Chinese governments said.

China is now Japan’s biggest trading partner with $340 billion in two-way transactions last year.  Yet China’s equity market has suffered which creates a special value as you’ll see below.

If you are a new subscriber learn about Keppler Asset Management here.

Last quarter, Emerging Markets equities recovered some of the declines suffered during the first nine months of 2011. The Morgan Stanley Capital International (MSCI) Emerging Markets Total Return Index (December 1988 = 100) gained 4.8 % in local currencies, 4.4 % in US dollars and 7.9 % in Euros.

Year to date, Asia is down 14.5 %, EMEA 9.3 % and Latin America 10 %. Performance numbers are in local currencies unless mentioned otherwise.

In 2011, four markets were higher and seventeen markets declined.

There was one change in our performance ratings last quarter: China was upgraded to “Buy” from “Neutral” at the end of October.

The following table shows how the Emerging Markets Top Value Model Portfolio compares to the MSCI Emerging Markets Index at the beginning of 2012 based on selected asset and earnings valuation measures:

See how to get a Multi Currency password here

← Your Own Online Business...Childsplay! Added Edge →