Expectations of doom create the desire for alternative income sources for many readers.

This is the third message in this alternate income series.  See part 1 here. See part II here.   During this series it’s worth remembering some good advice that most Americans began getting as far back as 1955 from the spokesman of one of the most successful magazines in the world.

“What, Me Worry?” Alfred E. Neuman in Mad Magazine coined the phrase.

Silly? This wisdom is a lot less stupid than a lot of the daily bad stuff news…doom and gloom that shuts the creative flow and life energy down.

The idea of the series first came when a reader sent me a page from the Naturalnews.com website.    This is a good site and Mike Adams, the creator offers some great information.  He has followed (probably unknowingly) in many of my footsteps moved to Ecuador for several years. Then he moved on…  I believe to China for awhile but finally ended back in the USA.

He wrote about his overseas experiences in :   One of the most common questions I’m asked today from people who are aware of what’s really going on is, “Should I leave the USA to get away from the coming police state?” Three years ago, I would have said YES, but today, after having experienced such an effort myself and now having a clear understanding of the ramifications of such an effort, I must urge people to reconsider. As you’ll read here, you may ultimately be far safer and more successful living right where you are, in your “home country,” even if that home country becomes a police state.

He shared five reasons why he returned to the USA and wrote:  I share with you five powerful realizations you need to keep in mind when considering where to locate (or relocate) before the collapse becomes a reality. (Time is growing short, so read up…)

For starters, there is a universal truth you must accept if you hope to make a truly wise decision about where to locate: Corruption is everywhere.

Realization #1 – Corruption is far worse outside the USA

Realization #2 – Many cultures do not practice long-term preparedness thinking

Realization #3 – Don’t be the foreigner

Safer?  Safer from what has to be asked?   Merri and I have a farm deep in the Blue Ridge with our own spring water, alternate energy options as well as abundant food and neighbors who know how to live off the land.   We dd not choose that farm as a escape hatch though. We moved there because we love the place. Just as we shifted to Ecuador because we love this country… just as we purchased real estate in London, the Dominican Republic because we really wanted to be in these places.

We have always believed that life is too short to do something just for the money.

Mike has some good points, but we see them from a different and point of view.

We agree that home… family and the USA have great appeal… but for very different reasons.  Those who have been reading this site for some time know that we dramatically increased our US focus earlier… beginning back in 1999…  yet there is a difference between our thinking.

Second…  We do not believe that there will be a collapse.  Time is not running out before everything falls apart.   If there is a shortage of time, it is a limit on how much time we have to get ready for the next, “bigger than ever”,  boom.    History strongly supports the view that we are just about at the end of a natural 15 year bear market that began in 1999 and the next 15 year bull will be the strongest ever.  I am not surprised that younger people miss this fact.  They did not live through the third worst recession of the last 100 years in the early 1970s.  I did and I was sure the collapse was coming then.  Only after the 4th worst recession in the 1980s did I figure the “it gets better after it gets worse” part out.  Since It took me 20 years to figure out the power of cycles… I am not surprised that so many who have not had this global experience of 40 years are seeing this recession in such a negative way. 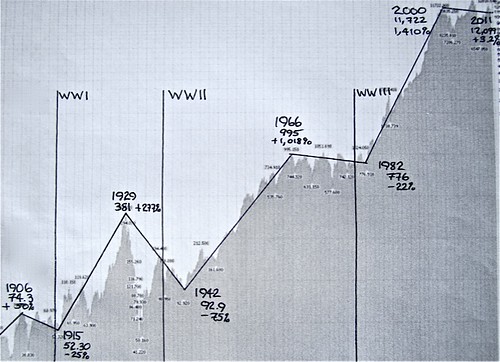 Graphical Evidence that doom is not ahead and the bear is nearly through.

Third… we never have relied on any one country.  Like others we have lived all over the place… Asia, and Europe as well as the USA… looking for the best place.  Then we realized there is no best place. The sun always shines somewhere…  but nowhere… all the time.

Success and happiness come from taking what we have within to take advantage of what is without… wherever and whenever we are.  The conditions around us are not what are important.  Our correct view of condition and reaction to them are what count.

Those who have been readers since our print days know that in the late 2007 we sold all our Florida real estate.  People thought we were nuts!  We were buying Ecuador real estate while that country went through its most terrible economic crash in its history.

Everyone there thought there would be a total Ecuadorian collapse.  In a way there was. The country ran out of gas.  All the banks closed. The president then truly was crazy. They called him El Loco and he was said to be corrupt as well.  The country then went through a string pf Presidents and disasters.   We kept buying real estate until the country sorted itself out and a wave of expats moved in.   Ecuador became known as the best to retire in the world.  We began selling real estate there (which was looking really good) and buying back Florida real estate where there once again was disaster.

This does not mean we abandoned Ecuador. We still have a hotel, a 962 acre hacienda. numerous houses  and condos plus a very active Ecuador business.  Ecuador is a great place to be but we have less weighting there in good times than bad.  I fully suspect given the grace of God that in another decade I’ll be buying back there again and selling in Florida.

Or… with Europe’s problems I may find myself buying back into the London real estate market in 2013 or 2014.

What you can be sure of is that our residences and investments will be in places we love first and see as opportunities second.

You can gain everlasting income from capitalizing on cycles and from having alternative sources of residence and incomes.   Since the 1970s our publications have urged readers to be multinational.  In Merri’s and my case we have interests in Europe,  the UK… Ecuador and the USA.  Our buying and selling is all based around weighting.

We have never had everything out of the USA or Europe or Ecuador.  At times we have more weight in one place or the other… but  we always keep something going in each place so we have alternatives.

The best way to make your alternative income sources successful is to create them in place where you want to be.  Follow your desires rather than your fears.

This is Merri’s and my 43rd year of global investing and business. Few have a longer experience and what we have seen is that fear and contraction is almost always wrong in this expanding universe.  Growth and evolution are the attributes that bring the greatest success.

History agrees, as shown in the chart above, supports our thinking.  From every fall… every war… every plague came a great new Phoenix.

In this time of greatest fear. At the end of the darkest hour… when doom and gloom are in full bloom.  Invest in fear. Embrace change.  Be bold and take a positive view.

Some great minds agree as you can see in these quotes below.

The fear of death follows from the fear of life.  A man who lives fully is prepared to die at any time.  ~Mark Twain

We cannot banish dangers, but we can banish fears.  We must not demean life by standing in awe of death.  ~David Sarnoff

Men fear Death, as children fear to go in the dark; and as that natural fear in children is increased with tales, so is the other.  ~Francis Bacon,

Some people are so afraid to die that they never begin to live.  ~Henry Van Dyke

One of my favorite quotes is from Ashley Montagu… The idea is to die young as late as possible.

There is a wonderful translation of a Rumi poem by Coleman Barks:

Once a sheikh and a disciple were walking quickly toward a town where it’s known there is very little to eat. The disciple says nothing but he is constantly afraid of going hungry. The teacher knows what the student thinks. How long will you be frightened of the future because you love food? You have closed the eye of self-denial and forgotten who provides. Don’t worry, you’ll have your walnuts and raisins and special deserts. Only the true favorites get hunger for their daily bread. You’re not one of those. Whoever loves the belly is brought bowl after bowl from the kitchen. When such a person dies, the bread itself comes to the funeral and makes a speech. “O corpse, you almost killed yourself with worrying about food. Now you’re gone and food is still here, more than enough. Have some free bread. Bread is more in love with you than you with it. It sits and waits for days. It knows you have no will. If you could fast, bread would jump into your lap as lovers do with each other. Be full with trusting, not with these childish fears of famine.”

Regardless of your view now is a good time to act.

If you believe that time is short before a collapse… then figure out what you can do… that you love… to invest in the collapse.

If you believe as Merri and I that we are nearing the end of a natural… expected… good 15 year bear cycle… then invest in the recovery. The key is… take a view… figure out what this will mean and enjoy the evolution.

We created a Super Thinking +Spanish teaching program so readers can create an alternative source of income that helps people adapt to any situation.  Spend the next year with us learning how to earn anywhere in the world as a Super Thinking teacher below.

See the Naturalnews site mentioned above at http://www.naturalnews.com/034404_preppers_collapse_bugging_out.html