How to Profit from Border Blindness

We can profit from border blindness by exposing ourselves to other cultures for broader  horizons.

Border Blindness stops many people from seeing the most important expansion in their lives that is taking place.

A reader recently sent this question from our message that contained this photo.

Just a curiosity question why is there what appears to be an American Flag on the top of this building? 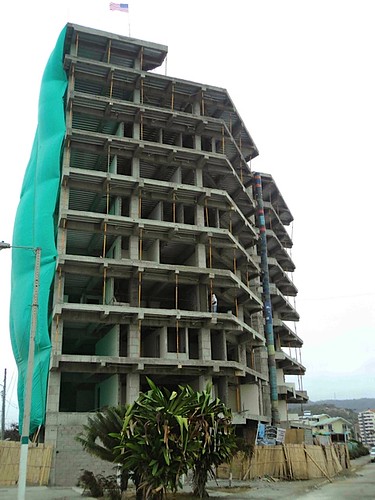 Jean Marie Butterlin who heads the Ateam Ecuador explained that there is a flag from every country of every buyer of condos in the building.

What a great idea… to do this and to live or dwell in places where many nationalities live or are.  Over the 40 years we lived abroad, Merri and I have always tried to live with locals as well as Americans because this really expands one’s point of view. 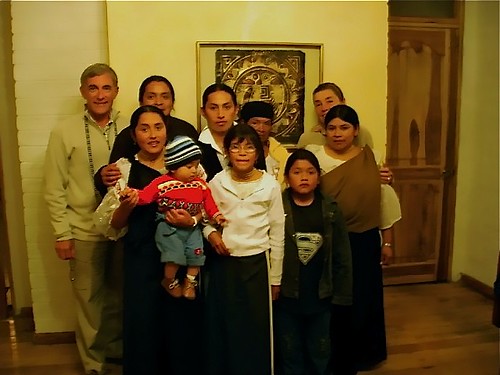 A global view is really important in these days of the global economy and accelerating change.

Having multi national friends helps eliminate Border Blindness. This is important because we now live in a global world. Those who do not expand their horizons to gain from all the benefits beyond their borders could lose out…  a lot.

My first book “Passport to International Profit” threw out the idea of Border Blindness.

It said:  Borders are transcended by almost all human emotions. Get a pretty Italian and handsome Irishman together and they will fall in love. Put a Mexican with a cheaper tomato next to a hungry Canadian and the Canadian will get out his loonies and buy the tomato. Put an Englishman and Frenchman in a sinking ship and they will both bail water.

The market place of humanity tramples borders. The deepest nature of our existence supports free trade and free movement of all to anywhere in the world.

Modern communications and transportation have made globalization so easy and brought us the wonder of multi cultural joys.

I have found that if one treats people with fairness and respect, these courtesies will be returned.  When one moves to a new place they become the foreigners.  This is true nationally as well as internationally.  We moved to Hong Kong and were long nose foreign devils.  We moved to England and were Yanks. We moved to Florida and were Snow Birds.  We moved to Ashe County, North Carolina…where Floridians are called “Floridiots” by many who were born there.

I can sum up the benefits of being multi national by quoting some dialogue from my novel the “65th Octave”.

In this book, the hero and heroine, Robin MacAllen and Talking Panther, stumble across a group of Controllers who try to gain control of the world’s economy. These Controllers accumulate huge amounts of shares and dump them after creating terror in the marketplace. With their extensive cash hoards, they buy up the market for pennies on the dollar. Released well before the September attack on freedom, I worried the premise was far fetched. Now the plot hardly seems dramatic enough!

Here is one of Talking Panther’s dialogues.

“In the beginning, we were one. We were in the middle and this was good. All knew the other and all were in harmony with nature. Then some of us wandered and left the middle. Some went west. Others east. We lost touch.

“Few could see that we are still part of a whole.

“This was the beginning of ignorance and its son fear. Fear made each feel less and made each want to be more. Fear blinded the truth that all are equal and that we really are all one.”

Even if one cannot or chooses not to move… one can delve.  For example I make it really easy to read publications from many other countries.

I created a home page that is filled with links so it is really easy to see what is happening around the world.  I only read four US publications… The New Yorker (I love the cartoons) the Wall Street Journal, New York Times and USA Today… not because I especially like these publications but because I know they have the large circulations and I want to know what the public is reading.

Here is my home page.

Each square is a link so I can quickly get to the Latin, African, Australian, Middle East, Ecuadorian and European news.

Living among and sharing with many cultures teaches us a lot. We learn about how many things in our own culture are petty and vice versa for one thing.  We pick up some new aspects of life we would have otherwise missed!

Why a Global Micro Business?

When one has a micro business they can live anywhere they choose as Merri and I have done for decades.

The world’s economic future is in global growth.

Robert D. Hormats an Under Secretary for Economic, Energy and Agricultural Affairs said at the World Investment Forum in Xiamen, China last year.  Over the last quarter century, foreign investment has accelerated at a breathtaking pace and shifts in the flow of this investment are now reshaping the global economic landscape. We have seen inward foreign direct investment stock roughly triple worldwide over the past decade — and that holds true for developing countries as well as developed economies.

Today more than 80,000 multinational corporations (MNCs) are operating worldwide with more than 800,000 foreign affiliates – compared to 37,000 multinational corporations and 170,000 foreign affiliates active in 1993. Foreign investors not only bring fresh capital, technology, competitive spirit and ideas to new markets; they also bring jobs. They employ nearly 80 million people worldwide, a figure that is roughly twice the size of Germany’s labor pool – and one that has quadrupled over the past three decades. These foreign affiliates also point to a deeper level of economic integration among nations. They show a purpose and commitment beyond one-time sales or market entry into well-established trade patterns. Investment not only drives jobs and innovation, but it also increasingly drives trade.

The global sales of the foreign affiliates of MNCs now equal roughly two times the dollar amount of world exports according to UNCTAD’s World Investment Report 2010. This makes foreign direct investment increasingly important in terms of the delivery of goods and services to international markets. Roughly one-third of world commerce takes place as intra-firm trade. And the bulk of technology that is transferred flows within the framework of the integrated international production system. FDI and the activities of MNCs have become central to the world economy at large, and particularly important to developing countries.

Plus small is now more beautiful than ever before.

Let me clarify that small can still be  profitable.

Merri and I continually are grateful for having one of the smallest but most profitable web based businesses.

We certainly are one of the tiniest businesses around.  Merri and I work from home offices deep in the woods of the Blue Ridge, or tucked into our Florida grove and in hidden deep in Ecuador.   This tiny web business just has Merri, David Cross, our webmaster and me.

The point? You do not have to have a huge operation to earn and live very well.

And we try to stay that way! Small (but profitable). This keeps life simple… easier to enjoy.

You can live and/or travel and enjoy the world.

Your own micro business greatly increases your chance of becoming financially independent even when it remains small.  Gaining a global view that eliminates border blindness can help you profit from change.