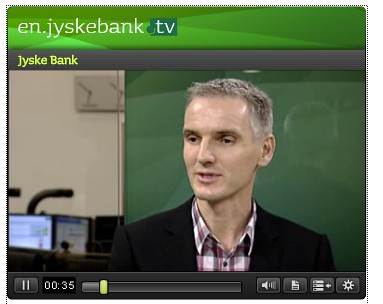 Steen Nygaard Head of Treasury at Jyske about the downgrade on Jyske TV. See link below.

Considering the economic prospects, it is now entirely up to ourselves to bring about the basis for a higher rating of Jyske Bank. This is a target to which we give high priority. The various initiatives taken this autumn in the form of cost reductions, an increased interest-rate margin as well as acquisition of business volume will contribute to improving our earnings capacity. To this must be added our most recent initiative – buying back hybrid core capital, which will strengthen our equity and hence the quality of our capital base.”

There are several positive factors to keep in mind.

First Denmark remains ranked AAA and Scandinavian currencies remain a safe place to be. See more on this here.

Third, securities… ie stocks and bonds are not affected by this downgrade.   Your investments at Jyske are kept separate in a nominee account, In other words  client holdings are separated from the banks own holdings so are protected by their own financial stability.

See more on the Jyske downgrade at Jyske TV here.