Our recent International Business & Investing Seminar looked at the micro business & multi currency abundance we have ahead of us now. 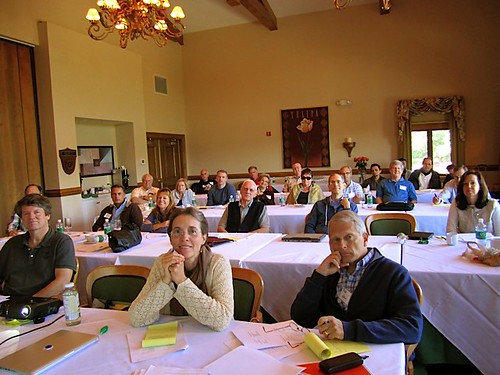 We met at Jefferson Landing and enjoyed autumn’s blaze of colors. 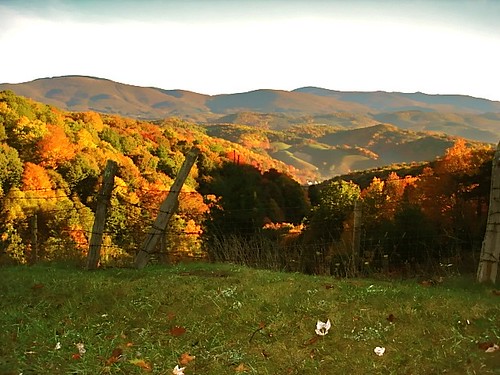 An October view from our North Carolina farm.

Life is such an analogy and nature is reality’s artist showing us truth in so many ways…. everyday.  This picture of golden richness is that time of reality’s greatest beauty as it also heralds the darkest hour.

This was the theme of our International Business & Investing Seminar last weekend at Jefferson Landing here in the mountains.  We looked at how so much news is focused on doom and gloom but why and how this is the richest of times for opportunity.

We first looked at the benefits of the economic cleansing we have seen in the past few years… how housing has become affordable… how big government is being exposed…how labor costs are reaching competitive levels and how North Americans and Europeans are beginning to work harder and save again… how they are seeing the importance of relying on themselves instead of big brother.

The delegates at the seminar enjoyed perfect autumn weather and as we examined why we should be afraid but also bold.

Do not get me wrong.  We let our delegates know that not all the news is good.  Many in the world will suffer from the evolution that is taking place.

An October Bloomberg news article entitled “Falling Wages Threaten Consumer Spending” shows an avenue of suffering when it says: Ninety-one percent of people in the U.S. labor force have a job. That may be the extent of the good news for these Americans, whose incomes tell a darker story.

Take-home pay, adjusted for prices, fell 0.3 percent in August, the third decrease in five months, and personal income dropped for the first time in two years, the Commerce Department reported last week. The declines followed news from the Census Bureau that median household income in 2010 fell to $49,445, the lowest in more than a decade, and the poverty rate jumped to 15.1 percent, a 17-year high.

Salary and benefit growth “has been going nowhere,” said Mark Zandi, chief economist at Moody’s Analytics Inc. in West Chester, Pennsylvania. “One of the key reasons the recovery has stalled is that real incomes have fallen.”

The earning power of the average American male’s age has dropped back to 1950’s levels.

The October 10, 2011 New York Times article “Recession Officially Over, U.S. Incomes Kept Falling” by Robert Pear shows another bout of economic pain:   In a grim sign of the enduring nature of the economic slump, household income declined more in the two years after the recession ended than it did during the recession itself, new research has found.

Many with old mindsets could have a hard time.

Reasons for being bold now!

Let’s look at the good.  A reader recently forwarded one of those emails I never pass on but this one began with a note that is so applicable to this message that I have included this excerpt: ONE AT A TIME.  Yesterday I was in WalMart looking for a wastebasket. I found some made in China for $6.99. I didn’t want to pay that much so I asked the lady if they had any others. She took me to another department and they had some at $2.50 made in USA. They are just as good. Same as a kitchen rug I needed. I had to look, but I found some made in the USA and they were $3.00 cheaper.  We are being brain washed that everything that comes from China and Mexicois cheaper. Not so. That is also why I don’t buy cards at Hallmark anymore. They are made in China and are expensive. I buy them at Dollar Tree….50 cents each and made in US .

I have not researched this and don’t know how this works as I haven’t been buying anything much lately…but the sentiment is well said and the factors behind it true. We are seeing big changes as US workers become more competitive….and this is not bad.

A Rising US Dollar

At the seminar we looked at why this is time for a short term US dollar rebound as well.  A recent New York Times article on the US dollar confirms our thinking and says: For the better part of the past decade, the American dollar has been the 98-pound weakling of the foreign exchange world. It has lost value against almost every other global currency — not just the euro, pound and yen but even the Romanian new leu and the Latvian lats.

Driven largely by the Federal Reserve’s policy of printing dollars to help spur a healthy economic recovery that remains stubbornly elusive, the dollar, weighed against a basket of other currencies, hit a 40-year low in May 2011.

But betting against the dollar may no longer be such a safe play — not necessarily because of any sudden macroeconomic shifts but because of a sense that the long dollar sell-off may have finally gone too far.

The dollar’s bounce, though too brief to be called a trend, has not been driven by any noticeable improvement in America’s economic fundamentals. Indeed, the faint but real risk that Congress will fail to reach agreement on raising the legal ceiling on government borrowing only underscores the still parlous state of the American economy.

At the same time, unemployment in the United States remains stubbornly high, at 9 percent. And there is a strong belief among big money investors that the Obama administration as well as the Federal Reserve chairman, Ben S. Bernanke, tacitly welcome a cheaper dollar to spur exports and encourage American manufacturers to hire more aggressively.

Opportunity from a Stronger US dollar.

Thomas Fischer, Senior VP for Jyske Global Asset Management, spoke about how their low risk portfolio currently holds 40% dollar cash.   This was not because JGAM believes in a long term strong US dollar but because they expect the stronger US dollar will create extra buying opportunities  in the near future.

We looked at why equities provide the greatest opportunity for long term profit.  We shared with delegates a study by Dimson, Marsh & Staunton at London Business School on long-term global equity performance from 1900 to 2009. Over a 110-year period, 19-country capitalization-weighted stock index total return of 8.6% per annum in U.S. dollars compared to a 4.7 % return per annum for the equivalent 19 country bond index. Allowing for inflation, 3.0% per annum real returns of 5.4% and 1.7% per annum,  the global stock portfolio grew 331 fold vs. global fixed-income which grew only 6 fold.

We also viewed how the current downturn has totally been expected.  This site has continually reviewed the 15 to 17 year economic cycle as outlined by Austrian economist, Joseph Shumpeter. The global economy (and US stock market) enjoys an approximately 15 year bull…. then about a 15 year bear (a period of no growth) and then moves back to start a 15 year bull.   These stock market bull and bear cycles are based on cycles of human interaction, war, technology and productivity. 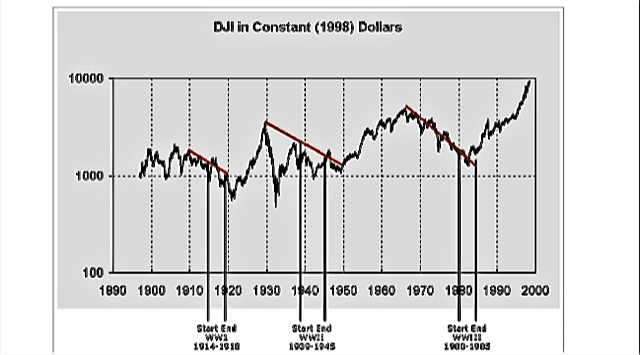 At this seminar we looked at how the US equity market is currently about 12 to 13 years into the 15 year trend.

Then we looked at this chart from Moore Research Center, Inc. to see what to expect from Oct. 2011 to Oct. 2012 if that period compares with the same period in the cycle.  The historical story tells us to expect little growth in the next year.

Notice the similarities between the market in early 1980 (Blue Line) and the current S & P 500 below.  There is also a strong synchronicity between the S&P 500 and the MSCI World Index below (covers all shares globally). 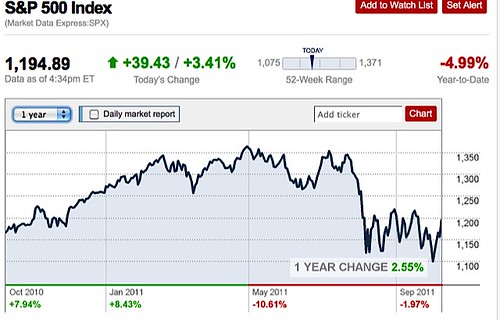 If this cycle theory were to repeat itself neatly… we should expect a downwards drift for the next 12 months then just a tiny bit of recovery in 2013.

Again if the theory repeats… around October 2013 the S & P will once again begin to rise.  This is when the next bull market begins and we can be sure that the next rise will be due to good economic news.

So hang on!  Plus be sure to look for what new exciting evolutions will once again jump start social economic expansion.

These broad trends are not very exact… but history strongly suggests the bear market we have seen since 1999 is normal… the worst is over but we could see some added downwards drift this next year.  However, a great time to buy!

Perfect Time for A Micro Business

We also shared ways to earn income from micro business start ups.  There has never been a better time to have a lifestyle micro business.  Technology and rapid change in the way the world works all favor small mobile flexible businesses.

We looked at ways that readers can have a small micro business in global finance.   Another way is with environmentally safe organic chemistry.

Another idea we looked at was how to have an export business.  One export is Ecuador Flowers and we shared 50 Ecuador roses with the delegates at the seminar.

See how to get a FREE recording of this October seminar and how to attend our  Mt. Dora Florida, February, 2012 International Investing and Business Seminar.

On the subject of Ecuador roses now is the time to order 50 Halloween roses.  These orange bi colors are called High & Mighty. 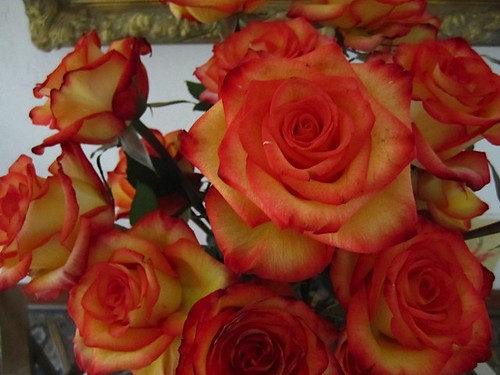 To give you an idea what you can do with 50 roses, we had 50 roses at the seminar. I gave a dozen of them away at the hotel but now have…

some at the entrance to our house, plus… 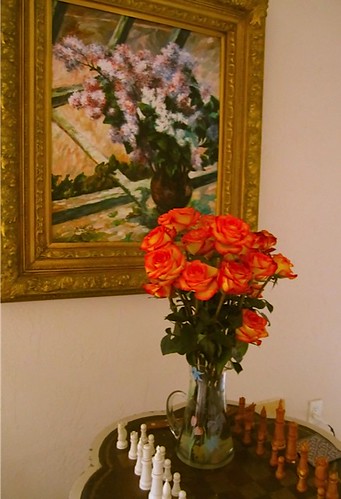 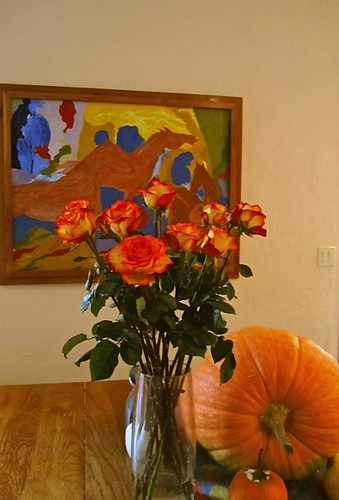 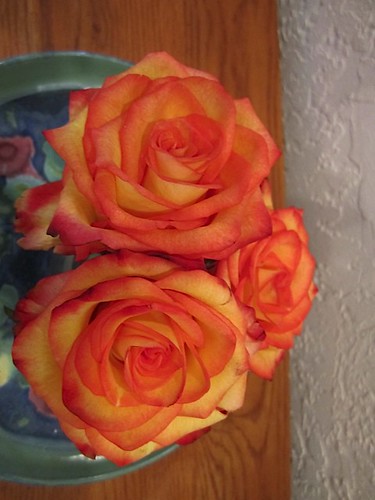 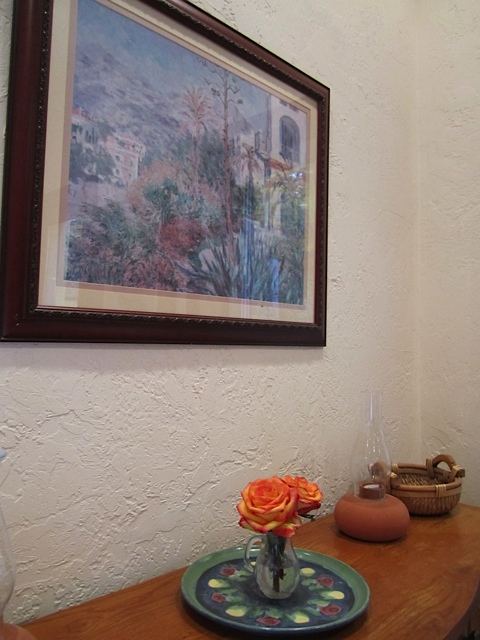 Once again on the subject of Roses, these are not economic days of wine and roses…these are days of risk management when global economics look bleak.  However, such times are the most fertile beds of opportunity for those who recognize the true nature of all cycles and take this time of change as a time to accumulate great value and future potential opportunity.

Save $41. Subscribe Ecuador Living Premium Service (normally $119).   Get your subscription and first Halloween rose order at half price. $169 total.