Once you understand the science of why and when omens work you can use them effectively  in your multi currency investing and micro business.

The Western mindset wants to separate science from intuition and omens.  Yet the information below shows how science and the science of omens and thinking outside the box are connected. 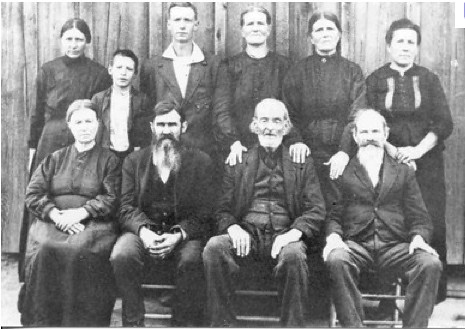 An old photo entitled Melungeons from the “Empty Quarter” a French website.

The Melungeons. Should they be your weatherman, financial adviser, business consultant…. or all three?  See how one of the ancient American cultures uses omens to outsmart modern science and how their wisdom can help you in business and investing.

First “Ashe County”… often called the “Lost Provence”.  We live here part of the year and love the county’s old fashion way of life and values.  Yet… did you know…. that within two years our telephone coop will be the only telephone company in the USA that serves all of its customers on fiber optics?

Imagine this old fashion place… deep in the mountains… where people still know how and do live off the land… living on a dirt road but connected to the world at blazingly fast speeds!

“Small is better now.”  (Hold this thought as well.)

A little known culture lives near Merri and me in the Blue Ridge. They are the Melungeons and their history is steeped in mystery. They are called the “Lost People ” or the “Mysterious” people of the Appalachians. There are many stories about their origins. Some say they are descended from the “Lost Colony of Roanoke” then married into the local Native American tribes. Others say they were descendants of Welsh explorer Modoc who came to North America around 1100 A.D. Another story is that the Melungeons are the lost tribe of Isreal. Others say they evolved from Portuguese adventurers, who came to the long shore parts of Virginia, became friends with the Indians and intermixed with them, and subsequently with the pioneer settlers.

Now a story in our local newspaper the Ashe Mountain Times  “Mullis predicts less snow, more ice” by Jesse Campbell shows how omens have the ability to beat one of the West’s most refined sciences…. weather forecasting.

One more thought to hold… “The butterfly effect. Does the flap of a butterfly’s wings in Brazil set off a tornado in Texas?”

Here is an excerpt from the article:    Joe Mullis has issued his forecast: Break out your parka and scarves because this winter could be one to remember. After once again watching Mother Nature’s ominous signs unfold around him, Ashe County’s own winter weather prognosticator is telling High Country residents to brace for a colder, icier winter than usual.

For as long as he can remember, Mullis has turned to his natural environment to see what the winter has planned for the Blue Ridge Mountains and lately the results haven’t been too encouraging for milder weather lovers.

It is a time-honored tradition that was passed down to Mullis by his mother, and his mother’s mother, and so on. It is a lineage of forecasting taught by his ancestors who picked up the craft from the early settlers of the region and the Native Americans.

He follows a list of indicators, but one of the more telling practices is counting the number of August fogs to determine how many snows are on the way this winter. Each morning, Mullis drags himself out of a warm, comfortable bed to find his place at the same spot where he has counted fogs since his mother passed along the family tradition.

For each fog he counts, he drops a bean into a canning jar: a small bean for each smaller, wispier fog and larger beans for the thick, blanketing mists that engulf the mountains’ valley.

Each big bean, Mullis explains, represents a large snow (more than four inches) and smaller beans denote the smaller size variety, which he said are the events that leave just enough of the white stuff on the ground to track a rabbit.

After counting the number of fogs this August, Mullis claims Ashe, particularly the Creston area, can expect five big snows and seven smaller snows.  Although some may jeer at Mullis’s forecast, his accuracy has been almost impeccable. For the past two years, he has missed the number of snows only once each time for 90 percent accuracy. For the third straight year, Mullis is also predicting a Black Squirrel Winter.

Along with a multitude of other signs Mullis records in forecasting the upcoming winter, Mullis says black squirrel sightings across the High Country are the most telling of what to expect from Mother Nature.

Mullis said the appearance of the animal is synonymous with colder, harsher winters for the area. Until 2009,  Mullis had never seen a black squirrel and his mother, who was well into her 80s, had not either.

“The Native Americans call it the winter of sorrows,” said Mullis in regards to black squirrel sightings of centuries past.

The article explains some of the other omens Mullis looks for such as bee’s nests.  Thicker nests suggest colder weather. He also observes how the grass lies. Twisted, intertwined grass is a sign of a colder winter as the mass creates a natural shelter for small animals.  God does look after all! 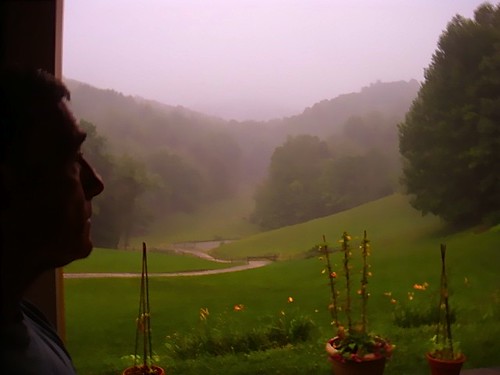 Checking out an August fog rolling across the front lawn at our Blue Ridge farm.

Here is how our observation of what I call “The Mullis Factor” can help us in business and investing… especially in these times of global economic change.

Does the flap of a butterfly’s wings in Brazil set off a tornado in Texas?  In chaos theory, the butterfly effect exemplifies the universal reality of the sensitive dependence on initial conditions.  Everything in life… big and small is dependent on an infinite number of small previous events.  Even the small changes at one place in the past in a nonlinear system can result in huge differences. This term “butterfly effect” evolved from the meteorological work of Edward Lorenz, who popularized the term. In the early 1960s, Lorenz noted that even very slight changes in numerical computerized weather models resulted in completely different weather scenarios.

As Above So Below

The big impact of small changes on weather reflects the nature of the universe that we call chaotic.  Chaos is another word for the inability of our logic to deal with the magnitude of nature’s order. In simple terms, chaos means “Our logic just ain’t smart enough to know it all”.

Though we cannot logically specifically know how nature unfolds, we can observe the order of chaos. James Gleick in is book Chaos: The Making of a New Science looks at change from a scientific point of view.

This chart of chaos is from Gleick’s book and shows how our logic classifies nature’s order into three states:… steady,  transition and chaotic. 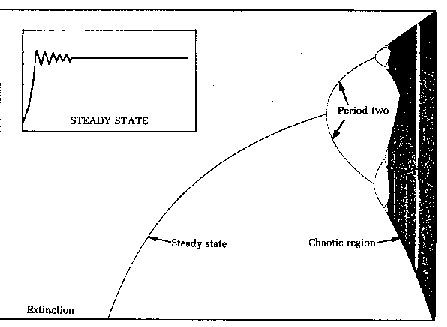 The graph from James Gleick’s book Chaos: Making a New Science depicts how all things and events move from order to disorder.

Anarchy and chaos are not really disorder but simply our logic’s inability to understand order that appears to our limited mental capacity to be random.

The social logic tends to be formed… and even cemented in the past when there is a an extended steady state. A mindset solidifies that how things have been… is how things will be.  This thinking can create huge organizations… businesses…. agencies…. nations  and institutions…. as long as the steady state lasts. “The bigger the better” is the mantra of the steady state.  However this is a narrow point of view that ignores even what our logic can understand about the universal order.  Steadiness is not the glue that keeps everything together. Coherence comes only through evolution and change.

One way to understand this is simple.  Get on a bike.  Try to remain steady when standing still? Forward motion is the key to stability.

As one aspect of our unfolding shifts from steady to transition and chaos… “Big is bad!”  Small… flexible… adaptive… innovative is better. If you do not believe this, ask the dinosaurs.

The key to success in a micro business, international investing and life is integrating “modern logic” and “old fashioned Beyond Logic”.  This is one reason why we are in Ashe County.  It’s small… with old fashioned ideas but adapting and modern as well.

This is why we look for ways to think beyond logic… omens… astrology… meditation… frequency modulation with… music… aroma… and color as well as use every source of logic we can muster.

This is why our next two courses in Ashe County look at both ends of the logical and beyond logical spectrum.

Blaine Watson’s September 23-25 “Investing & Business Beyond Logic” looks at how astrology works and how to integrate this ancient science with modern logic.   This course will be conducted at our farm beginning this Friday Sept. 23 at noon. We have two spaces left. Learn more here.