Think about multi currency international investments out of aging economies. 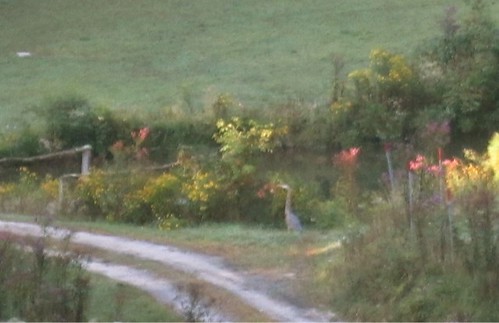 Blue Heron at our Blue Ridge Mountain farm taking in the pond scene.

The aging industrial economies are one reason why Merri and I have a farm in one of oldest geological formations on earth.  The oldest rocks found in the Blue Ridge mountains are said to be 10 million centuries old. In fact, most of the rocks in the Appalachians are this old. These mountains are believed to have been the highest on earth roughly 460 million years ago during the Ordovician Period, much like, but higher than the Himalayas today.

See more on how an old farm is a good investment in an aging economy… first let’s look at how the aging economies can affect your multi currency investments.  You may want to look at Ashe County farms for sale (there are about ten available around us) during our International Investing and Business Seminar October 7, 8, 9.  We will have a local real estate broker at the seminar to help. See why below.

Day after day, stocks swing sharply by hundreds of points. Last week they tumbled 3 percent in the first 90 minutes of trading on Tuesday morning, then on Wednesday closed nearly 3 percent higher and dropped almost 3 percent on Friday. All of this on the heels of unusual back-to-back 4 percent leaps and dives in one week in August.

Now traders head into the week with fresh worries about the chances that Greece will default on its debt and the havoc that would wreak on European banks.

All of this anxiety has caused experts to ask whether there are new forces at work in the stock market that make trading permanently more erratic.

In fact, big price moves are more common than they used to be.

It has become more likely for stock prices to make large swings — on the order of 3 percent or 4 percent — than it has been in any other time in recent stock market history, according to an analysis by The New York Times of price changes in the Standard & Poor’s 500-stock market index since 1962.

This extra motion comes from the fact that investors are not sure what to do.  Demographics have reached a point where the aging of the major economies of the past 60 years has become a major driving force.

After WWII; USA, Western Europe and Japan were THE economies.  Their economic engines accelerated the global economy.  One aspect of human nature that affected this process is that as people become more prosperous and healthy, they stop having so many kids.   The USA, European and Japanese birth rates slowed down.  The emerging economies on the other hand continued to have higher birth rates.

This brings us to now.  Emerging economies have emerged AND still have more youthful populations than THE BIG THREE economies (who are growing less BIG).  Aging populations coupled with growing pension and health care and social costs now create enormous fiscal problems in Japan, Western Europe and the USA. The US is better off than Europe and Japan due to their more liberal immigration policies which created a higher birth rate.  Yet all these large economic areas are suffering because they are aging.

The turmoil is caused because the investment community as a whole is still applying the investment thinking of the 1970s and 1980s to the here and now. 20 and 30 years ago, the safe place to invest was in the USA, Europe and Japan. Everywhere else was perceived as risky. However as far out as it was our messages were among the first… clear back in the 1970s… that urged investors into Hong Kong and emerging markets.

No more!  We now know that even the thinking of the 1970s and 80s was wrong. Emerging markets as a whole outperformed major markets in the past four decades.  Even the global investment thinking is finally beginning to change.

An August 27, 2011 Economist article entitled “Eastern Europe’s economies” said:  Some calm amid storms.  The EU’s newer members are not its most troubled—but they have problems.

Wobbly finances, low living standards and weak institutions are a bad mixture. The ten “new” (a relative term: most joined in 2004) ex-communist members of the European Union were once seen as its most troubled economies. In 2008-09 Hungary, Latvia and Romania needed bail-outs. Across the region unemployment rose and growth slumped. Western European policymakers worried about contagion.

Now those fears seem distant. Even as ratings agencies humble mighty economies like America’s and Japan’s, they are upgrading the EU’s newcomers: Standard & Poor’s recently raised Estonia to AA-, only two notches below America. All ten have growing economies, shrinking budget deficits and falling unemployment. The three in the euro zone—Estonia, Slovakia and Slovenia—are contributors to the bail-outs, not supplicants. Poland, by far the biggest, is growing at a healthy annual rate of 4% and celebrating a lower-than-expected budget deficit. Many feel that the whole idea of “eastern Europe” is out of date.

This is why we have to think again way outside the box.  All the lessons we were taught years ago are now wrong!

There are seven ways to beat stagflation.

#1: Move to a lifestyle of lower cost living such as Ecuador or Smalltown USA.

#4: Invest in precious metals and commodities.

#5: Invest in your own natural health.

#6: Invest in a micro business that also does social and environmental good. and earn more than the loss of your money’s purchasing power.

#7: Invest in necessity.  Water, food, clothing and shelter are markets that never end.  Look for ways to invest in necessities of good value such as farms in Ashe County.  People up here have lived though many poor times… always with enough water, food, clothing and shelter.   Old mountains are stable… low risk of earthquakes, hurricanes or tornadoes.

This and the wonderful lifestyle in nature are the reasons we have our farm here.

This is why in my personal portfolio breakdown that I sent to my multi currency subscribers and International Club subscribers is filled with emerging market shares and bonds.

See how to become an Multi Currency subscriber here.

See how to be an International Club member here.

Look at Ashe County farms for sale.   There are about ten farms around us on the market and during our International Investing and Business seminar October 7-8-9-10.  We will have a local real estate broker at the seminar to help.

Thomas Fischer and I will outline global investing portfolios to beat stagflation and turmoil at our October International Investing & Business seminar.

Links to articles mentioned above: