International multi currency investments in necessity are  a good way to store value. 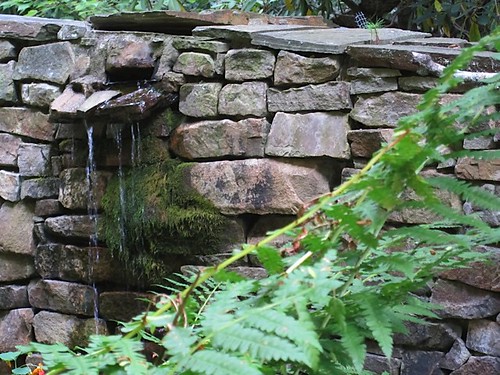 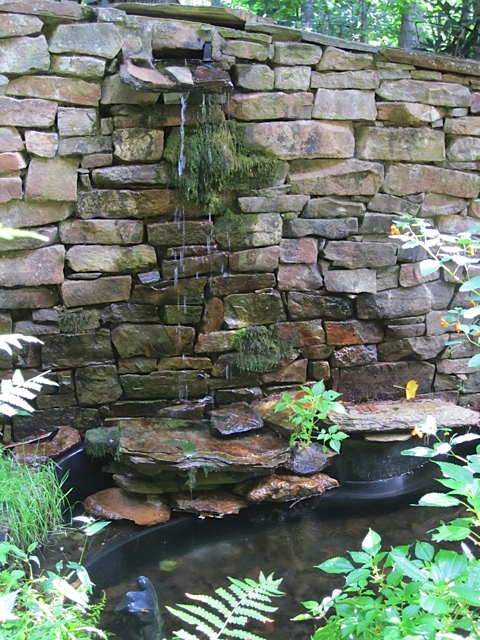 pond in our back yard is one reason we bought our North Carolina farm.

Last Saturday’s message Storing Wealth Made EZ looked at how stagflationary pressures have put almost every investment at risk and raised the question, “How can one store wealth in such an atmosphere?”

That message said: Traditionally Swiss francs and precious metals, especially gold and silver are the favored stores of wealth.  These investments should usually play a part in portfolios as insurance. 5% to 10% of a portfolio in metals and hard currencies is a general rule of thumb.

These hard assets were good ideas for speculation a year or two or even a few months ago.  Not when they are at all times highs though. History suggests that their high price puts their promise as a store of value at risk. In previous monetary corrections when the price of Swiss francs, gold and silver exploded upwards… the peak was followed by a harsh… extended downfall.

So I was not surprised to see that last week, before the collapse of Gold’s price, JGAM took profits on the wise gold positions that they had accumulated earlier in the year.

JGAM announced:  On 25 August JGAM’s Investment Committee held an ad hoc meeting, deciding to carry out the decision we took on 11 August:  “It’s our intention to use a rebound in equity prices to reallocate even more into defensive stocks. Furthermore, we intend to turn up and down on risk exposure by use of currency positions using tight stop losses to limit downside risk and locking in gains by use of trailing take profit stops, i.e. using the successful disciplined approach from our Managed FX portfolios.” (Quote from the 11 August meeting.)

Prior to this week, stock markets have fallen four weeks in a row. However, this week we have seen the expected rebound which causes us to take action and further reduce risk exposure by selling stocks and move all managed portfolios into an underweight equity position. Also, we take profit on approximately half of our gold position. The price of gold has risen to record high levels since we entered the position, and we are taking the opportunity to book some of the gain. However, we still keep a gold position of approximately 5% as a hedge in case stock markets plunge again. Furthermore, we put a take profit stop on our Swiss franc position to make sure we don’t lose the gain we have obtained.

We have done all this before Ben Bernanke spoke in Jackson Hole today, Friday. Markets are optimistic that the Fed’s chairman will announce policy actions that will cause a shift in investor sentiments and stop the sliding stock prices. However, at JGAM we think it will be difficult for Mr. Bernanke to fulfill markets’ high expectations. We still have difficulties seeing where the growth shall come from in the present deleveraging environment we are in and policymakers lack of room for maneuver. Add to this the smoldering and unsolved eurozone debt crisis. Therefore, we expect to be able to pick up stocks at more attractive levels on a longer-term horizon. However, short-term we are prepared to scale up and down our risk exposure by using currency investments. E.g., if Ben Bernanke succeeds in creating a positive sentiment in the stock market, we are ready to quickly take on risk exposure through new currency positions positively correlated to growth and stock prices. We will keep you updated.

We now know since JGAM issued that report that Bernake surprised everyone because he did not offer any plans for additional measures to bolster short-term growth.  He said that that the economy was recovering and the nation’s long-term prospects remained strong instead.

Regarding gold we remain in agreement with JGAM’s advice of last week… take profits if you have not. 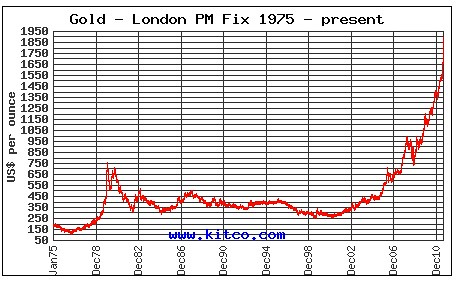 It makes good diversification sense to hold a percent of your portfolio in gold… yes… absolutely.   Gold as insurance… a permanent but small portion of your portfolio is different from gold as a speculation.  Gold can be a good speculation…  as the chart above shows.   When it is at an all time high… beware.  Very few people find value at the top of a bubble and the history of serious sharp declines in all speculation and all bubbles exists.

The Kitco.com website says: In an article titled, “What Goes (Straight) Up …”, KITCO.com analyst John Nadler said the bears are seeking to test the 1680 to 1650 level, and that a bounce from there would not be surprising. He also made an allusion to memory of the large decline in 1980 (which was about 45%).

In an interview with The Street, titled “Expect a 35% Correction in Gold,” he said that a 35% decline was possible, and that something in the 1480 area might be a bottoming level.

This begs the question then, where does one store value?

Necessity is always a good place to store value… food, clothing and shelter.  However, the root of all three of our basics is water.  Water investments offer great potential. This does not negate the need to suit such investments to your needs.

While the world’s population tripled in the 20th century, the use of renewable water resources has grown six-fold. Within the next fifty years, the world population will increase by another 40% to 50%.  This population growth – coupled with added water demand per person from industrialization and urbanization – will result in an increasing demand for water.

Yet the world may be entering an era of less water!

A August 22, 2011 article in Time Magazine  entitled “Parched Earth” by Bryan Walsh says:  Hurricanes announce themselves on radar screens before slamming into an unlucky coast. Tornadoes strike with little warning, but no one can doubt what’s going on the moment a black funnel cloud touches down. If we’re lucky, a tsunami offers a brief tip-off — the unnatural sight of the ocean swiftly retreating from the beach — before it cuts a swath of death and destruction.

But a drought is different. It begins with a few dry weeks strung end to end, cloudless skies and hot weather. Lawns brown as if toasted, and river and lake levels drop, like puddles drying after the rain. Farmers worry over wilting crops as soil turns to useless dust. But for most of us, life goes on as normal, the dry days in the background — until one moment we wake up and realize we’re living through a natural crisis.

This summer the python has gripped much of the southern U.S., from the burned fringes of Arizona — singed by massive wildfires — to usually swampy Georgia. Hardest hit is Texas, which is suffering through the worst one-year drought on record, receiving an average of just 6.53 in. (17 cm) of rain so far this year, well off the 34 in. (86 cm) it receives over a normal 12 months. At the end of July, a record-breaking 12% of the continental U.S. was in a state of “exceptional drought” — the most severe ranking given by the National Drought Mitigation Center. More than 2 million acres (809,000 hectares) of farmland in Texas have been abandoned, and streets are cracking as trees desperately draw the remaining moisture from the ground. Taps are dry in one North Texas town.

And there’s evidence — when it comes to rainfall, at least — that the good years we’ve enjoyed in the past may have been more of an aberration than we realize. The Southwest in particular has a history over the past two millennia of severe droughts that lasted for decades; deeper in the geologic past, dust bowls endured for centuries. Just as worrying, climate change is expected to further dry out much of the region, multiplying the impact of population growth and expanding demand for water. What the South is facing may be not just a drought but the first signs of a permanent dry, one to which we’ll need to adapt — if we can. 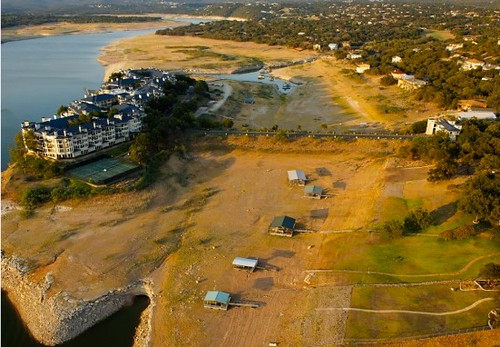 This, one of the 17, photo entitled “The Island,” shows a resort on Lake Travis, that is normally a peninsula surrounded almost completely by water. All the photos are linked below.

Hyflux chart from sg.finance.yahoo.com.   Hyflux trades in the USA as OTC code HYFXY.

We have been recommending Hyflux for over five years.  Each time the price drops I mention this again.

I invested in Hyflux shares myself yesterday.

There is one concern that may also be pressing (and could continue to press) on Hyflux shares.  The Middle East and North Africa (MENA) region, contributes 60 percent to the group revenue.

Hyflux announced last February that three water purification projects in Libya, worth hundreds of millions of dollars, could be delayed.

We first recommended Hyflux in 2004.  Then we wrote about Hyflux again in 2008…  both times before the shares began to rise.  You can see those who purchased Hyflux in 2004 and 2008 have been in a position to make huge profits.

#1: Is Hyflux a well managed company?

I have liked the management team for years. The group is headed by Olivia Lum who has proven to be an astute leader. Hyflux Limited SGX: 600 began in 1989 as Hydrochem (S) Private Limited, a trading company selling water treatment systems in Singapore, Malaysia and Indonesia and later, China. Lum has been progressive. She added a team of scientists and engineers that created technology for Singapore’s water recycling plants that filter and treat waste water.

These technologies are based on semipermeable membranes and reverse osmosis that is capable of extracting potable water from residual, sewage and salt waters.

Hyflux was the first water treatment system company to be listed on Singapore’s equivalent of NADAQ in 2001 and the first to be upgraded to Singapore’s main exchange in 2003, again making history.

The group has been expanding geographically first to China, then lucrative Middle Eastern markets and is now entering India, Southeast Asia and Africa.

#2: Is the company in a growth industry?

There are few sectors with as much potential as water. China, the Middle East and India offer special opportunity.

#3: Are the shares available at a good value?

The shares are certainly a better value than a few months ago. Here is the share price over the last year.

I am writing about Hyflux again now because the global stock market sag has pushed Hyflux shares down once again and created extra value.
However as you can see from the company’s financials, sales, profits and dividends are at all time highs!

This may be a good time to look at Hyflux for our portfolios now.

An investment in Hyflux by the way, also represents an investment in Singapore dollars so all the numbers above have been enhanced by this added forex growth.

This chart from sg.finance.yahoo shows the benefits of a multi currency portfolio as the Singapore dollar has risen versus the US dollar since 2004

One More Vital point About Investments and Water.

The United Nations Water agency UNwater.org says:  A Drought in Your Portfolio?

The World Water Assessment Programme (WWAP) participated in the EIRIS conference on global water risk research. The conference explored the investment case for considering the risks and opportunities arising from water scarcity as part of a wider sustainable investment strategy, and heralded the launch of the EIRIS’ Global Water Risk report.

The report shows that out of the 2000 global companies analysed 54% are exposed to water risks but take little or no action to mitigate them, and approximately half show no evidence of any management response to water risks whatsoever.

So when thinking about any investment look at the water element… this is becoming a necessity that can help your future from becoming all wet!

Join Merri and me at our next International Investing & Business seminar when we look at eleven ways to profit from investing and business in water.