Do what you love… have fun.  The money will come.


Viewing summer from the front porch of our original North Carolina farm houses kind of exemplifies the importance of adaptation and evolution in investing. 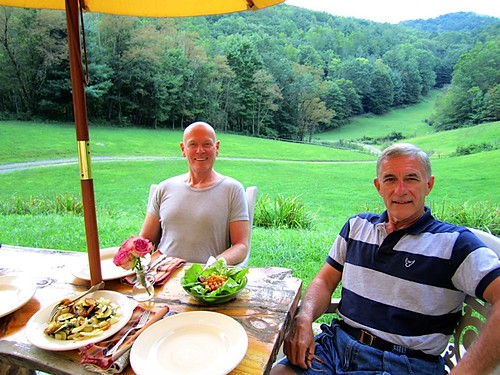 While most people fret over the potential of another recession and slowing growing economy,  Merri and I are ramping up expansion plans.

We are working with Glenn Stirling DC to develop a flow of low cost, natural health and longevity ideas that help our readers. We are planning tours in Ecuador and Cuba. Glenn has already begun his research and first trips to Cotacachi and Cuba.  He stopped by the farm last week, driving from Calgary, Alberto to Florida so we could review his current trip back to Ecuador.

We see the global economic changes as a a global social-business restructuring that favors small international micro businesses and providing enormous opportunity to pioneers in this field.

Since the beginning of the 2000s, we have echoed the words of futurist, Ian Pierson, that “a company’s value is its ideas, less it size and experience”.

And August 5th, 2001 article at msnbc.msn.com entitled “How Lego and other brands grab the news spotlight” by By Martin Lindstrom highlights a reality in this idea.  Here are excerpts: These companies hijack big events, make their brands the story.

On Aug. 5, NASA’s Juno spacecraft began its five-year journey to the planet Jupiter. Not generally known to the broader public, there are three “crew members” aboard, and they’ve all signed up for the duration of the trip. These “crew members” are in fact Lego representations of the Roman god Jupiter, his wife Juno, and Galileo Galilei, the Renaissance astronomer who made many important discoveries about our solar system.

The well-planned mission is part of Lego’s “Bricks in Space” program (not to be confused with “Muppets In Space”). A long-standing partnership between the Lego company and NASA has resulted in every space mission carrying numerous Lego sets onboard.

Similarly, on the same day evacuated victims of tornado and flood were able to return to assess their damage, Procter & Gamble installed hundreds of washing machines replete with truckloads of Tide washing powder to help with the cleanup.

This is more than simple product placement.

A few companies have become expert at using these resources and hijacking the news, making their brand the story. With the steady increase in alternative channels, the opportunities have never been greater.

So if hijacking the news can be so very powerful, how come hundreds of great opportunities consistently pass brands by? It obviously has little to do with the cost factor, given the fact that Lego, Nike, and P&G’s assertive actions have paid off handsomely.

Capitalizing on the immediate is a familiar concept to anyone younger than twenty something. They have no problem with turning ideas into action in a matter of minutes. They don’t bat an eyelid at instant celebrity. Theirs is a universe where dropouts become billionaires and startup software companies dominate the market in a few short months. Corporations, on the other hand, are far more circumspect. Their wheels turn so much slower.

So, the question that remains is how have some companies managed to gear up their internal machine to swoop in and perform successful brand hijacks, while the majority don’t get a look in? Perhaps the answer can be found in the wisdom of sixth century military strategist, Sun Tzu. He wrote, “Every battle is won before it is fought.” In other words, you need to win a war before it has begun.

P&G have learned that the public expects the largest consumer packaged goods company to help society, and as a result they have a strategy in place for disasters before they actually happen. Their strategy can be activated in an instant.  See a link to the entire article at the end of this message.

This is the great advantage of  a  micro businesses… the ability to quickly adapt.

How can one decide though when to shift?

A subscriber to our online Self Publishing Course sent this comment:  Dear Gary,  I have worked my way through Lesson Three and was most taken by your comment that one should embrace those of like mind and repel the rest– repel is I think a strong word, but the principle is right. I use the term “Disengage.”

I am a retired trial attorney, free at last; and over the past three years have had the time to sip old literary wines: Euripides, Plato, Seneca etc, and am amazed again how the answers to a good life have been written thousands of years ago. It is my ambition to write a self-help book in which I intend to offer a practice conceived in my studies of Greek and Roman philosophy and some 30 years in Japanese, Korean and Theravada Buddhist monasteries.

As I write this book I strive always for the right voice, realizing, of course, that the voice is right, so long as it is true, well tempered– as a sword is well tempered– and your own.

The perfection of voice of course is the pursuit of a life time.  However, I noticed for a few chapters that a voice far less than perfect because it seemed that I was diluting the message simply to reach a larger audience. I rewrote the opening chapters to appeal to those whom I could help and with whom the practice I offer might resonate.  Your message is well taken. Publish to those whose voice is in harmony with your own.  Thanks


My reply shows how to decide when a shift in your business and investing is right for you.  You are on the right track.  One way I see it in terms of gears. A little fast gear cannot mesh with a big slow gear.  All that will happen if the speeds are not synchronized is a clash.

Follow your heart and it will lead you exactly where you are meant to be!

This has unsettled Merri and me several times when we strove hard to get into some position where everything was perfect and then somehow after we were there we began to feel… we had to move on.  This is so hard sometimes… but really easy when you believe your heart.

Our heart feels the pull first… then we get messages… little clues. If we do not ignore them… they’ll lead us into a most pleasant place.  So be true to those feelings when you write and you’ll create the perfect message… for you and for all of those who need what you have to share… perfect harmony.


Comfort is one of the most important aspects of successful investing. If we make investments not in keeping with our nature, we will not be comfortable.  Without comfort, we are more likely to second guess and screw up. Restlessness and worry reduce the joy of affluence and also can reduce investing effectiveness as well.

All of us need to invest in things and do business that we feel is right… that is enjoyable.

For example when Merri and I moved out here to our farm, many of our friends thought we were nuts.  Not only has country living added joy to our life, it is probably the best investment we ever made.  Every year, the move feels more correct, especially at this time of the year when we have scenes that Glenn shot like this… of summer richness… warm days and cool night around the farm. 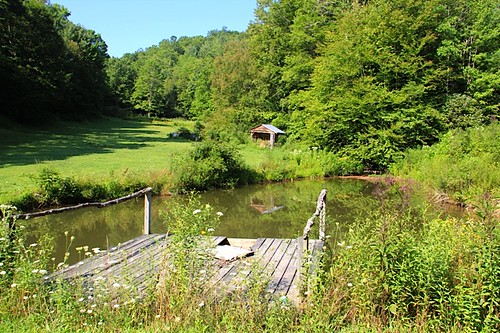 Living deep in the Blue Ridge might not seem like a  logical place to learn about international investing, but being in nature like this gives me so much added perspective and the ability to quietly think and contemplate without interference. 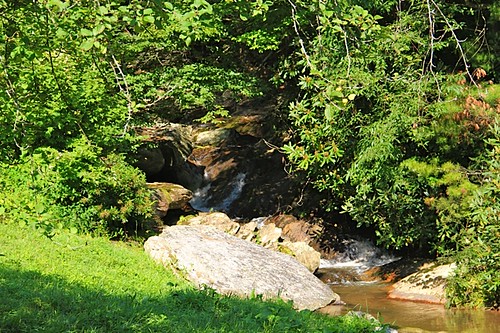 Shot of creek and.. 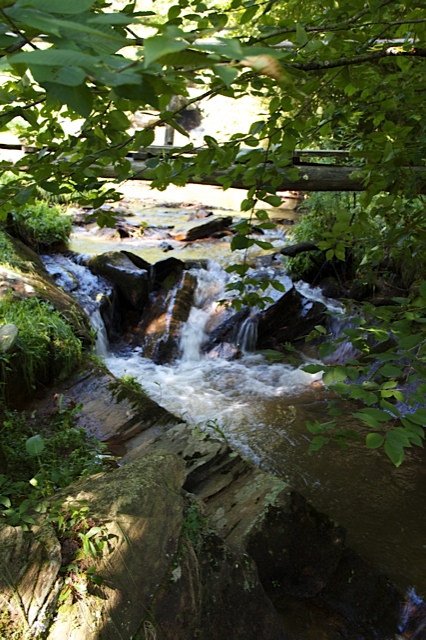 The trees say, “Who cares if the stock market is down.  “It’s summer.  Time to enjoy nature’s richness!”


Lance Armstrong summed this idea up in a Time magazine article when asked about who to listen to about what to do in life when he said: “The important thing is to go around (collect data-get information). Then you really start to weigh your options. Which one feels right? It may not be the right decision, but it’s what makes you feel right.”

This understanding is vital in life, investing and business.

Know that ultimately you must make decisions for yourself.  Know that you can’t know everything. Know that not every decision will be right in that it brings a profit, but also know that if each investment you make whether in time, money or energy feels right for you, you are likely to improve your odds of success.


Yesterday’s message looked at an idea that can help answer the question, “Who am I?”  This is complicated but easier to understand when we realize that most people fall into one of six categories:

(I advise everyone to read and study all of Malcolm Gladwell’s books…these genius ideas are from The Tipping Point.)

To understand this better let’s look at a study of a “diffusion model” from an analysis of the spread of hybrid seed corn introduced in Greene County Iowa in the 1930s. The hybrid seed which was superior in every way to the commonly used seed was first introduced in 1928.

Of the 259 farmers only a couple planted the seed the first year and through 1933.

Of the 259, the innovators were the first handful that began.

The small numbers that then jumped on the band wagon from 1929 to 1933 were the early adapters.

The late and skeptical mass did not try it until after the most respected farmers had proven its worth.

The laggards never did make the shift or waited till much later.

This diffusion is quite typical of all things. One could study the use of faxes, cell phones, computers, apps, etc. and see a similar diffusion.

What type are you? The type is not important. None is better than another.

Knowing what you are is the key because each category has a way of investing that can succeed if it is true to itself.

Suit yourself if you really want success…and then be willing to adapt to change in a way that feels right for you.

Charles Darwin expressed great wisdom when he said, “It is not the strongest of the species that survive, nor the most intelligent, but the one most responsive to change.”

Whether you are an early adapter who invests now while the market is falling in alternative investments, or a laggard who holds back his or her cash and waits…do what feels right to you….that’s the important thing.

Stick to the basics.  Always look for good value. Do not let fear OR greed tempt you to do something that does not feel right to you just because everyone else does.  Remember truth is not created by the continuous repetition of an error.  The majority of investors and businesses that start in most markets are wrong most of the time so you cannot depend on following the masses.

Know yourself.   Do what feels right for you.  Always seek good value.  This is a formula that will rarely lose.

Until next message, may your feeling right never be left behind.

Here are numerous ways hopefully we can help you adapt.

How Lego and other brands grab the news spotlight