New construction update in Bahia  Ecuador as of August 2011. 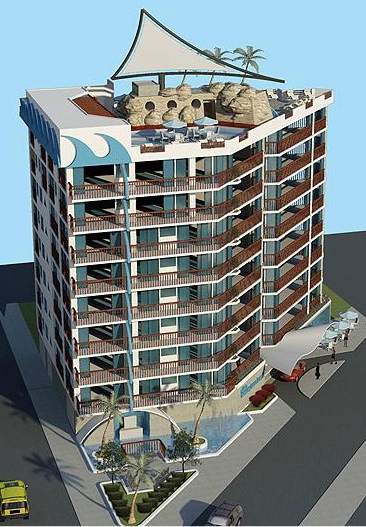 This last week has been pivotal in the global economy.  Congress is likely to raise the debt ceiling and reduce its expenditures… but this will not solve everyone’s economic woes.  If Congress agrees to this plan today, the plan is to reduce… not eliminate debt.  Can the plan be fulfilled?  Plus the reduction of spending (as much as it is needed) may slow down the economy. This is how economics should work.  But out of work voters usually fail to see the balance in such philosophy.

The problem cuts even deeper.  America has been seen as THE rock… the solid, concrete foundation of a sometimes shaky economic world.  This global perception may have been flawed… but in economics, perceptions count for a lot.  People will work… when they expect to be paid.  Investors will take risk when they expect there is a chance of profit.  Sellers will accept paper money if they expect it to have purchasing power later.

So belief in the American dollar brought global financial stability even if the belief itself was awry.

The Congressional mayhem of the last week has shone such a harsh spotlight on the US and the greenback… that even with a plan… the world will have changed… maybe for good…maybe not… but either way that change will bring pain to a lot of people.

The New York Times summed this up in a July 31, 2011 article entitled “In World’s Eyes, Much Damage Is Already Done” by David E. Sanger.  Here is an excerpt:  With the deal reached Sunday night, the United States has a good chance of escaping the debt limit showdown with its credit rating intact.

The United States government may not be so lucky with its reputation.

Even before negotiations went down to the wire on Sunday night, the bitterness, division and dysfunction that resounded around the world in recent weeks as the United States veered toward default did more than just fuel a perception that Washington is approaching Japan-like levels of political gridlock. Among foreign leaders and in global markets, the political histrionics have eroded America’s already diminishing aura as the world’s economic haven and the sole country with the power to lead the rest of the world out of financial crisis and recession.

The new head of the International Monetary Fund, Christine Lagarde, seemed to give voice to that concern when she noted on CNN that in the past there was always “a positive bias towards the United States of America, towards Treasury bills.” The events of the past few weeks, she said delicately, are “probably chipping into that very positive bias.”

“Even if the deal passes muster with the credit rating agencies, there is still a huge problem,” he said.

“The problem is that we need both a fiscal strategy and a growth strategy,” he said. “And what you hear around the world is that no one is convinced we do — that we have a pathway to making the debt sustainable and to dealing with everything from our infrastructure to our education system. It seems obvious to everyone that we haven’t done anything, but veer around to avoid catastrophe.”

This exposure of the economic and political cracks in the global economic system would be bad enough if it were just the USA that has lost its luster… but Japan and Europe have been caught in the same spotlight all at the same time.

This can create a panicky feel and panic leads to stampedes… never a good thing especially in an already weakened global banking system.

What can one do?  The answer to that has not changed… invest in multi currencies…  in good value equities… in real estate… commodities… have your own micro business and… live in places that you love with a lower cost… like Ecuador.

These options mean that you do not have to feel the pain of a global economic shift.  In fact on can live well… even better than before for less in many places like Bahia.

For example the first new condo construction for more than a decade began in Bahia last March (2011).  Here below are some notes from these new projects from Jean Marie Butterlin:

This project is on the Malecon and will contain 23 apartments facing the ocean, Chone Estuary, and the new bridge. 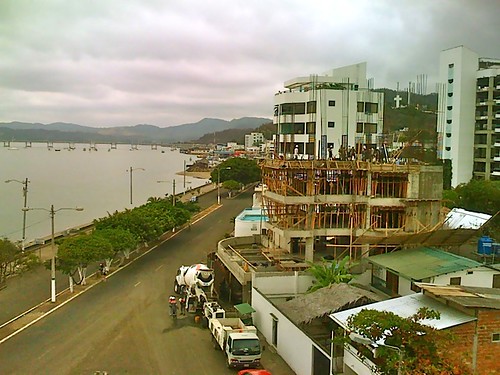 These 23 units are well on their way as this Bahia dream becomes reality.

June 2011 saw a second smaller nine apartment building started also on the Malecon. These units are closer to the center of Bahia and have bay and bridge views.

Last week another nine unit building was started near the second smaller building. 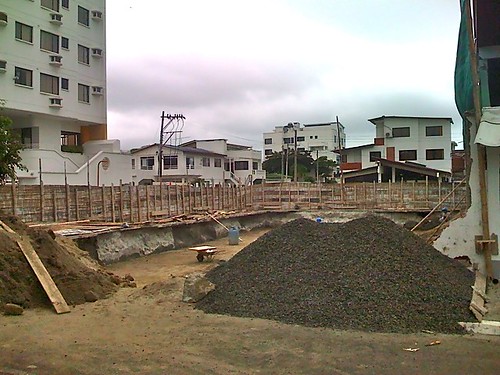 These new units are good because the real estate market in Bahia has become really tight. No new buildings were started  for 15 years.   Now these three buildings have all began in just 5 months.  The second smaller building sold out before it started.  There are only  two apartments left on the other nine project. These apartments are priced at $110 per square foot and are on the first and second floor.

We have been told by reliable sources that this building will be completed in December and will be the most luxurious project on the entire coast from Salinas to Esmeraldas.  Jean Marie. 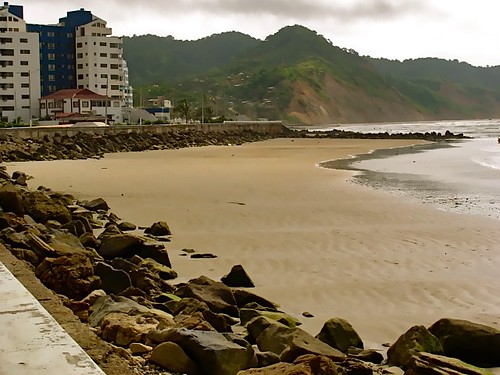 One reason why Bahia Ecuador is so much in demand is explained by this note from Jean Marie Butterlin who lives in Bahia with his wife Pascale.

How to add years to your life and life to your years in Ecuador.

One of the reasons Pascale and I love Ecuador is its closeness to the Latin culture, that is in our roots.

In our DNA, the Latins (French, Italian, Spaniards, South Americans)  is a gene I call the “Art de Vivre” or the Art of Living which flows through the Latin history.

I believe that the art of living is a factor that is linked to the great longevity enjoyed by the people of Ecuador. Bahia in particular is an area where one can enjoy this kind of living because of its slow pace… lost costs and sublime weather.

This art is difficult to define but I will try to give my version of it and how Pascale and I live it ourselves in our daily lives here in Bahia.

The artist of a joyful life takes time to enjoy the most important things in life. The artist avoids rushing. The artist has rituals… like dining instead of eating in a hurried way.

Before breakfast, we enjoy sipping our expressos or capuccinos on our terrasse, enjoying the sun getting up, 15 minutes of pure pleasure! 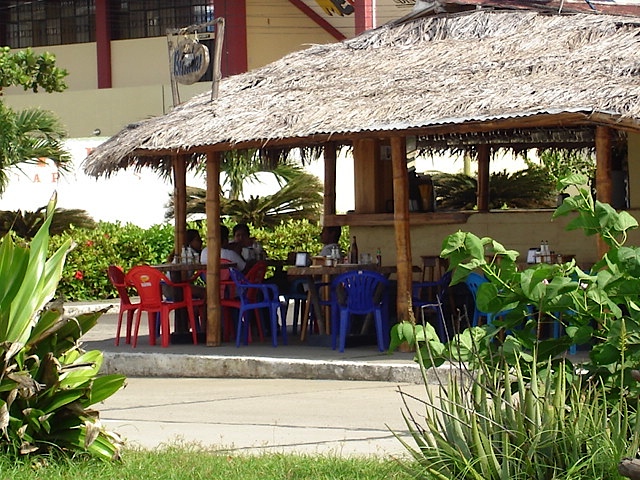 Breakfast is never hurried and lasts at least 30 to 45 minutes. This is our main meal of the day.

We bake our own bread using ancient whole, organic grains like spelt, quinoa or amaranth. (no allergens, glutens, pesticides ).

Lunch is a special treat.  We usually cook for a couple of hours after having gone to the mercado choosing fresh produce and fruits.  No TV is running, just some nice music, again on the terrasse overlooking the bay of Bahia.

We spend at least one hour for lunch if not more and we talk and exchange and about life.

Having the time to prepare exquisite food and to savor it is all part of the Arte de Vivre.   A nice Cabernet in a Waterford or Baccarat glass adds to the pleasure.

The Romans called it “Carpe Diem”, enjoy the day or the moment.  Ecuadorians call it “Disfrute la vida”  an epicurian way of life with a Latin touch.

All Latin countries have some of these habits and rituals from Rome to Madrid, Buenos Aires and Santiago.

We enjoy especially eating all our meals on our outside terrasses, either in Spain or in Bahia.   In Spain even though we have 312 days of sun where we have our second home, we can only eat outside 3 times a day during 5 months in the year.   In Bahia we enjoy eating on our terrasses 3 times a day 365 days a year! 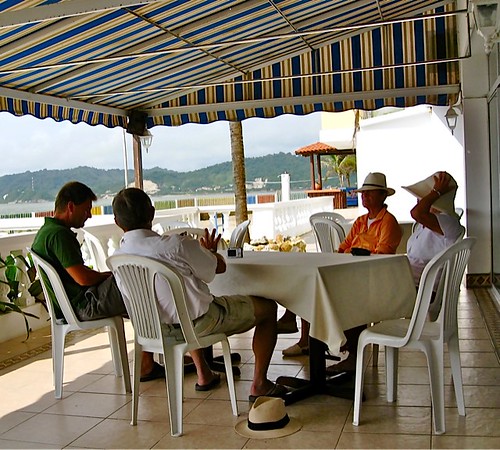 This was a big plus in our decision to make Bahia our home.

When eating out we mostly go to place that have open terraces with a view.  Fresh air and pleasant views  are as important as the food itself.

We dress when we eat at home or when going out.  In Bahia we live mostly in shorts and T-shirts yet for dinner at home or out, we avoid being too  casual.  I enjoy Pascale being dressed nicely for dinner as much as the dinner itself.   This is all part of the Arte de Vivre.  Jean Marie Butterlin.

As the global economy pivots…many will feel pain as their purchasing power wanes.  Inflation and higher unemployment do not mean that our lifestyles have to suffer.

Special places like Bahia Ecuador can make sure we can enjoy the Arte de Vivre.

What R U Going to Do?

If you live in Ecuador or anywhere abroad you’ll want to remain busy.   See how to gain opportunity in Ecuador exports.
In World’s Eyes, Much Damage Is Already Done