Here is why I have an Australian and Mexican touch in my portfolio. 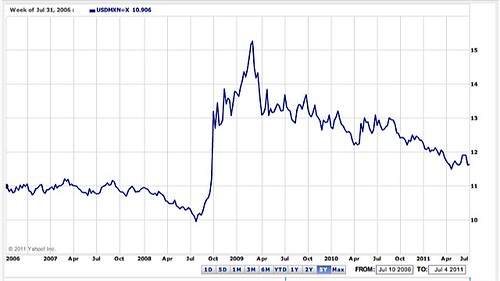 This finance.yahoo chart shows how the US dollar has been falling versus the Mexican peso for the past five years.

This finance.yahoo chart shows how the US dollar has been falling versus the Australian dollar for the past five years.

Many readers question my heavy Mexican peso position when they look at my personal portfolio diversification.

Here is my the currency breakdown of my portfolio.

There are several advantages… in my opinion… tho the Mexican and Australian currencies now.  The first advantage is the dollar rebound we saw when investors panicked in 2008.  The charts above show the real trend of the greenback against both currencies… down.  The risk of a stampede caused the dollar to shoot back up against both the peso and Australian dollar… but this was a fear based, knee jerk reaction not supported by economic and or fiscal fundamentals.

This is a time of global economic turbulence.  Inflation is high, interest rates are low and there is volatility and risk in many normally safe areas.  In such times we need to stick to basics and fundamentals such as growth and value.

This leads us to Mexico because the Mexican economy, despite its security problems, has better growth than the USA.

Not that his employer, Spellman High Voltage, needs much assurance. Like a crop of other manufacturers at the border, including six companies in this city alone, Spellman is expanding its operations, with a new plant under construction after making a calculation that offers one of the starker paradoxes of these violent days in Mexico.

Despite the bleak outlook the drug war summons, the Mexican economy is humming along, not without warning signs, but growing considerably faster than that of the United States.

Even as drug organizations battle for turf around them, more TV sets are being assembled, car parts boxed up and electronic widgets soldered together in the large manufacturing plants here known as maquiladoras. The result is a boomlet in jobs in some of Mexico’s hardest-hit cities, a bright spot in an otherwise bleak stream of shootouts, departing small businesses and fear of random death.

Over all,  jobs in Mexico’s manufacturing sector increased 8.2 percent to 1.8 million as of January, the most recent figures available, driven mostly by what Mexican officials called regaining health in the auto and electronics industries, the engine of the economy along the border. Even Ciudad Juárez, which has both the highest level of violence and the largest number of maquiladoras, added 1.3 percent more jobs, to 176,824.

Mostly American-owned and in border states, the plants import raw materials duty free and export assembled products, lowering the cost of goods in the United States and providing jobs that pay more than the Mexican average (typically $8 to $16 per day on the assembly line) but a lot less than American wages.

Some of the new or expanding plants come at the expense of plant closings in the United States. Electrolux, which makes washers, dryers and other home products, closed a plant in 2009 in Iowa but opened one in Juárez last month that is expected to employ 400 people.

Others are from investors farther afield. Foxconn, a Taiwanese firm that makes iPhones, Dell computers and other electronics, is one of several Asian companies taking root. Down the coast from here, Posco, a Korean steel manufacturer, has announced plans to expand its operations with a second plant that will employ 300 people by 2013.

Over all, the Mexican economy, the second largest in Latin America after Brazil, grew 5.5 percent last year, its fastest pace in a decade, and is expected to grow 4.5 percent this year, driven largely by manufacturing as well as internal growth from an expanding middle class. The American economy, by contrast, is expected to grow between 2.7 percent and 2.9 percent in 2011, the Federal Reserve projected late last month.

Economists say Mexico’s growth would be even stronger without the cartel violence, which in the last five years has left more than 40,000 people dead, according to the count by national newspapers.

The drug wars are creating fear and fear creates opportunity for investors willing to support nations in trouble. I first learned this fact when I moved from the US to Hong Kong. There were communists rioting. Bombs were being planted in the streets and the Chinese army had massed on the border.  Many investors fled. Everything worked out and those who remained loyal to the Hong Kong economy despite the fear made fortunes in the Hong Kong market and in Hong Kong real estate.

The article above also shows how Mexican workers also offer value... $8 to $16 a day for factory workers… probably the cost per hour in the USA.   Americans have to create value added services to compete so Mexico has an extra value advantage being on the US border.

There is also added value in the Mexican and Australian currencies created by the low debt ratios of each country. High debt is a factor that reduces the purchasing power and currency parities tend to shift based around debt ratios.  The currency of a country with a high debt ratio will be stressed in relation to a country with a much lower debt ratio.

The chart from a recent article at this site shows that the USA has a public debt equal to 57.6% of the Gross domestic product.  That’s not too bad but it is more than double that of Mexico and Australia. 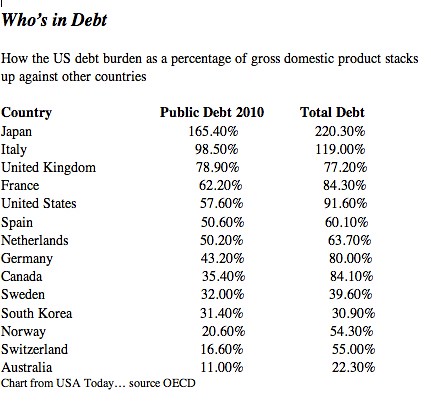 Australia’s public debt is only 11.00% of GDP and Mexico’s (not shown in chart) is 23% far below the US 57% US public debt ratio.  Plus the government deficits are much lower also as the charts from the Economist Markets & Data show.

The USA, Japan and the Euro area have much higher debt as a percent of GDP but also higher deficits which mean the debt ration gap is growing worse between these major areas and Australia and Mexico.

There you have it.   Higher return… better fundamentals in Australia and Mexico.

Plus there is one more benefit down under and down below the US. The fear based knee jerk reaction gave us an extra potential forex boost.

The five year charts above show the real trend.  That risk of the 2008 boost upgraded the value of the US dollar without foundation.  This makes it more likely that the buck will not stop falling here. Chances are it will drop back to the pre 2008 parities. This enhances the chance of some extra forex profit as well as the higher interest earnings.

I am sending a review of ETFs that can cash in on the imbalance to our Multi Currency Portfolio subscribers.  Learn how to get our multi currency training report and annual multi currency service here.

You can also hear our recent interview with Thomas Fischer on where to invest globally now.

We have added to our Global Personal Portfolio service… telephone updates.

Here is how the updates work.

You email me your questions.  We will review them with Thomas Fischer at Jyske Global Asset Management and then answer them in a telephone call.

We’ll send you the recorded calls at the end of the month.

Who is eligible to ask and to listen in to the call?

This service is free for all subscribers to our annual Multi Currrency Service.

Not a Multi Currency subscriber?  Learn how to enroll here.

Non Multi Currency subscribers can enroll to have their questions answered for a one time charge of $9.99. 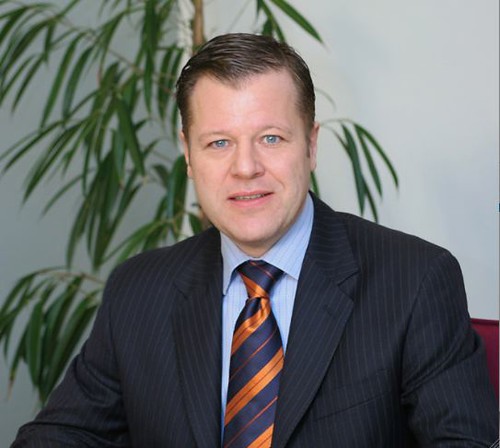 Thomas began his banking career in 1975. In 1978 he started in the trading room as a Foreign Exchange dealer, and spent the next 22 years on the telephone trading currencies. During this trading career he spent 2 years in London and 10 years in Germany where he was head of the international currency section of a major German brokerage company.

During his time in Germany he successfully completed an MBA focusing on the external environment and corporate finance.  In 2000 he joined Jyske Bank Private Banking and was promoted to Manager of International Client Relations in 2001.

In 2008 Thomas joined the newly established Portfolio Management Company Jyske Global Asset Management (JGAM), as a Senior Vice President.  He is  a member of JGAM’s Investment Committee focusing on our Foreign Exchange strategy.  He travels the world giving presentations about the markets and the investment opportunities. 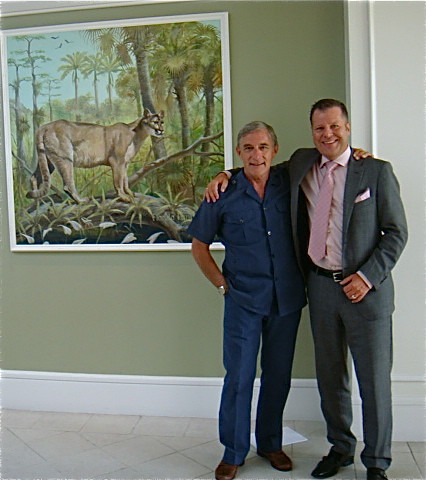 Here we are back in our old home town, Naples, Fl.

Learn how to earn in areas south in… 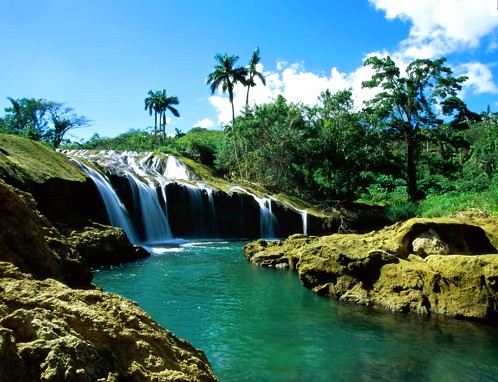 in Cuba and Ecuador. 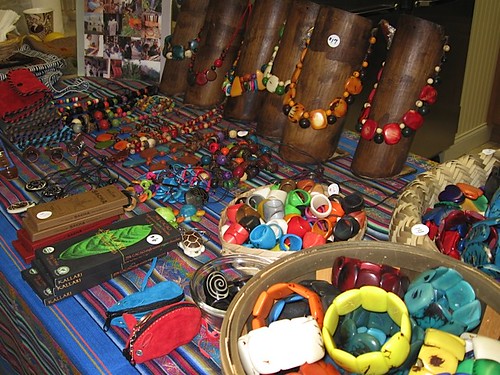