One way to beat inflation and economic pitfalls in the long term is with a global stock market spread. 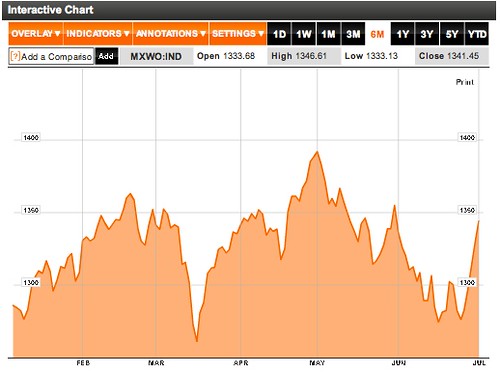 This is a Bloomberg chart showing the performance of the Morgan Stanley MCSI World Index.

However global equity growth is not always smooth.  There are many a potential crisis likely to cause equities to drop suddenly… everywhere… all at the same time… as they did in June.

This chart above shows how stock market investors panicked over the Greece crisis and how equities rebounded when the problem was once again forestalled.

The temporary reprieve in Greece is not the end of a sad story… but this delay does give us as investors time to prepare.

See below… the easiest way to gain the safest… and perhaps best long term, investment in the world.


Some great research, a long-term global equity study of shares versus bonds from 1900 to 2009, by Dimson,Marsh & Staunton at London Business School shows that the best way to beat inflation and economic downturns long term is in shares… invested for the long term.

Over this 110-year period, 19-country capitalization-weighted stock index total return of 8.6% pa in U.S. dollars compared to a 4.7 % return per annum for the equivalent 19 country bond index.  The global stock portfolio grew 331 fold vs. only a six fold growth of the global fixed-income portfolio.

So we should not have been surprised to see stock markets rebound last week at news regarding the Greek austerity plan.

Greece was the most imminent economic disaster waiting to tip a string of financial dominoes that would create financial turmoil in the Western world… at the least.

Thomas Fischer at Jyske Global Asset Management  sent this market update at the beginning of the week.

Kicking the can down the road!

You could almost hear the investors and European bankers sigh of relief when the Greek parliament Thursday agreed on the new austerity measures.

The measures will be implemented over the next four years and are a mixture of increased taxes, spending cuts and privatizations. The tax increases include an new solidarity levy, lower tax free threshold, increased sales tax and wealth taxes on luxury items.

The spending cuts include a reduction in public sector wages by 15%, reduction in the public workforce by 150,000, retirement age raised to 65 and general spending cuts. The government will also sell stakes in a range of national assets including 39 airports, 850 ports, railways, motorways, casinos and thousands of acres of land for development.

While protestors were rioting in the streets of Athens representatives of the Greek government were, according to the British newspaper The Guardian, trying to drum up international investors interest in the “fire sale” of  the national assets at Claridge´s hotel in London.

German and French banks, among the biggest holders of Greek debt, may join the rescue package by swapping existing bonds maturing within the next years into longer maturity debt.

As Athens said yes and with the can rolling down the road investors went into a risk-on mode and bought stocks and bonds selling safe haven assets such as US treasuries, gold and the Swiss franc. Even Greek government bonds, once the pariah of the investment world, became attractive sending the yield down from 30% to “only” 26.40%

William Shakespeare wrote in Hamlet “Something is rotten in the state of Denmark” –  the same can be said of Greece and the rest of the peripheral euro-zone, so debt issues may be solved for the time being but they will re-emerge. As the economist Herb Stein once said “If something cannot go on forever, it will stop”.

Thomas Fischer also added: Hi Gary, There is a report from UBS and published by the Guardian has hit the headlines in Denmark as Jyske Bank is the only bank in Denmark with serious exposure to Greece (EUR 92 million). The bank had already last year reduced the exposure by 30 million EUR. Also in relation to the banks own capital (13,5 billion Danish kroner or USD 2.5 billion) it is “only” 3.5%. Furthermore time to maturity is only 1 year.

It might hit the news in the US so thought you would like to see the full report:
http://www.guardian.co.uk/news/datablog/2011/jun/17/greece-debt-crisis-bank-exposed#data

Obviously the Greece and Cyprus banks have the highest exposure but the figures look grim for some German, Portuguese and French banks.

The Greek approval of the austerity plan gives the EU and European banks a reprieve. There are however plenty of other critical dominoes… Ireland…Portugal and the US debt ceiling being the most immediate.

Although the Treasury Department likely could avoid delaying Social Security checks, the analysis by the Bipartisan Policy Center points up the depth of the cuts that would be needed if the $14.3 trillion debt ceiling isn’t raised.

It shows that in August, the government could not afford to meet 44% of its obligations. Since the $134 billion deficit for that month couldn’t be covered with more borrowing, programs would have to be cut.

If Social Security, Medicare, Medicaid, unemployment benefits, payments to defense contractors and interest payments on Treasury bonds were exempt, that would be all the government could afford for the month. No money for troops or veterans. No tax refunds. No food stamps or welfare. No federal salaries or benefits.

As the center foresees it, the picture would get worse: layoffs and lawsuits. Global market reaction and media glare. A possible downgrade in the U.S. credit rating, perhaps followed by the loss of market access.

The effect on the country, said former Republican senator Pete Domenici of New Mexico, would be “irretrievable.”

These pitfalls require more diversification and a reduction of risk… but also create opportunity.

Equities rise long term. Each downfall creates a good buying opportunity.. if you can afford to buy, wait and hold on.

For investors wishing to easily diversify… there are few vehicles as wide spread as the Vanguard Total International ETF. (NasdaqGM: VXUS ). The chart (since inception) of this ETF is shown above.

This is the broadest international ETF that follows the MSCI All Country World Ex USA Investable Market Index which covers over 6,000 securities in 44 countries.

This new fund, which started less than a year ago, is also an efficient way to invest globally.  This ETF has an expense ratio 0.20% per annum, the lowest cost international ETF and less than half this sector’s standard expense ratio.

The fund has over $50 billion in assets so it replicates the entire index and provides incredible diversification.

This is a simple bet on non US securities around the world.

A comparison to the chart above of the MSCI World Index shows how closely the funds performance is to the index.

However earning sure profits from a global spread of equities requires time.  Many investors and or those who are unemployed or retiring do not have time.  What are they to do?


This is the last day to save on all our online courses, plus our seminars and tours. See how to have $1,046 though today.