See the depositor’s multi currency revenge that adds safety to the purchasing power of your savings and pays 7.12% per annum.

Many depositors and tax payers are upset. Bank fees and foreclosures rise.  Interest rates are really low… almost non existent…  during inflationary times.  Tax money lent to banks during the 2008 bailout is now being forgiven.

America’s debt is a huge problem so many have a hard time understanding why wealthy bankers (with multi million dollar bonuses) get relief  while the average householder is living touch and go just making the mortgage and paying for food and gas.

Excerpts from a June 11, 2011 Charlotte Observer article entitled “Banks getting bailout relief” by Rick Rothhacker says: It’s the latest example of taxpayers coming up short in the financial crisis: Troubled banks are paying back bailout dollars at a discount.

Burdened by faltering real estate loans, these institutions are selling to merger partners or seeking capital injections from investors. As part of the deals, the banks pay back the U.S. Treasury but in reduced amounts.

The discounts mean losses for taxpayers, but experts said the alternative could be worse: receiving nothing if a bank fails.

The discounts come more than two years after the government set up the $700 billion Troubled Asset Relief Program, or TARP, to shore up struggling banks at the peak of the financial crisis.

The fact that banks are paying TARP back at a discount shows the continuing struggles of smaller institutions and highlights the lack of an exit strategy for wrapping up the program, he said.

A chart from this site’s recent article “Economic Pitfalls Lurking”  shows that the TARP and Banking support created a significant amount of the added debt as well. 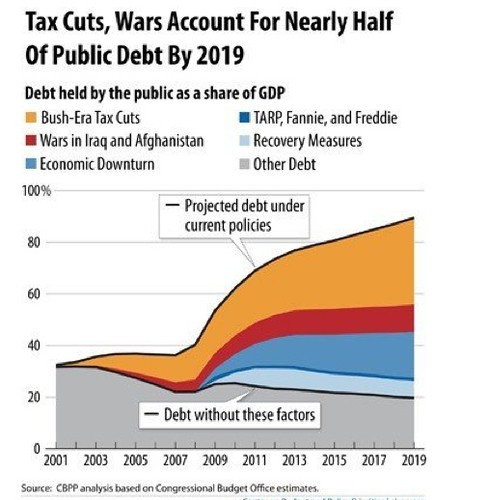 Sounds good for the banker. Right?

Maybe not.  Most bankers are as upset as the general public about the global economic state of affairs.  Like health care professionals and attorneys, they are caught in a bigger picture and system that they cannot change any more than voters seem to have been able to control.

There are some bad eggs in the financial community.   Which community does not have the bad mixed along with the good?

The banking system is only a reflection of many larger forces at work…  failure to adapt to growing and aging populations… huge demographic shifts… and rapid technological change… mixed in with the normal mayhem and greed that have always existed (E tu Brute). These are major causes behind the global economic dilemma that has caused interest rates and banking to skew the way they have.

Banking has become a really high stress occupation. For many bankers work is such a rat race that according to a June 2, 2011 Bloomberg Business Week article entitled “Finding Adventurous Jobs for Bored Bankers”  many bankers are leaving their jobs for something else.

Here is an excerpt from the Bloomberg article.  Escape the City caters to people looking for more than money by Simon Clark, a new website is thriving.  Rob Symington and Dom Jackman weren’t loving their jobs at consulting firm Ernst & Young in the City of London. “It felt like the work we did, crunching spreadsheets, just didn’t matter to anyone, including to our customers or employers,” says Symington, 27. Reasoning that they might not be the only young people in the City having second thoughts about their chosen careers, in 2009 Symington and Jackman, 28, quit and founded Escape the City, a website dedicated to helping bored finance workers shake up their lives by taking jobs with Mongolian venture capital firms, African charities, and other far-flung employers.

More than 30,000 people have signed up to view the listings at Escape the City in London—registration is free—and now Symington and Jackman plan to open a branch in New York this month. “Escape the City was created specifically to help talented people escape from unfulfilling corporate jobs after we realized that our own feelings of misery and frustration at work were shared by a lot of people,” says Symington.

Symington says the company was profitable in its first year. It sends members weekly e-mails listing opportunities in everything from Indian microfinance to Moroccan surf camps, and encourages wanderlust with evening events where adventurers regale crowds with tales of skateboarding across Australia or cycling around the world.

Harry Minter, 27, left his job at hedge fund Headstart Advisers in London in 2010 to manage the Guludo Beach Lodge in Mozambique after discovering the job posted on Escape the City. Last year Will Tindall, 28, found a job as chief communications officer of Asia Pacific Investment Partners, which invests in companies in Mongolia. He works out of Ulan Bator, Hong Kong, and London. The company hired a chief operating officer through the site this year and is advertising for a chief financial officer.

This adventure site has been working in the UK (where banking problems have been very similar to the US) and the developers believe it will attract American bankers into other positions as well.

Get revenge on the system… and then beat it.

Do as some bankers are doing.   Here are seven ideas.

Idea #1: One way to beat the bankers is with a high interest paying multi currency spread.  For example the US dollar interest rate right now is 0.18%… not enough with high gas prices to drive to the bank.

Instead invest equally in a spread of these seven currencies that earn on average 7.12%  per annum.

In addition to a high yield, you gain diversification into seven currencies and  four regions.

Idea #4:  Invest in a Jyske Global Asset Medium Risk Portfolio. You gain currency, regional and asset class diversification with daily management and extra profit potential.  Plus this portfolio has not risen as much this year (3.72% versus 5.81% for the non leveraged portfolio) because it is leveraged in part with Japanese yen loans. This increases risk, but also profit potential if you believe the yen will fall.


Idea #5:  Invest in a Jyske Global Asset Managed Forex Account. Currency volatility is bad for most investors… but creates good news for currency traders.  Jyske is among  the most experienced currency traders in the world and their higher risk managed forex account is already up 10% this year.

Idea #6: Speculate on the Australian dollar.

The chart above from business.yahoo Australia shows how the AUD has risen over 5% versus the new Zealand dollar and has almost doubled the interest rate.

Tomorrow’s message looks at why the Australian dollar (AUD) makes sense as an alternative investment and the whys and hows of the other five ideas above.

Idea #7: Create a micro business that allows you to be where you choose… and earn… even more than the banker.

Ultimately none of us can do a lot about the global economic system.  Like it or not the big picture is beyond our ability to change.

What we can control is the universal value that comes with the ability to serve. This is a reality that has never changed… never will and the ability of the small business to serve effectively is enhanced by modern technology.

We can help you create your own micro business in numerous ways.

These online courses are:

“Self Fulfilled” – How to be a Self Publisher

“Tangled Web” – How to Have an Internet Business

“Event – Full Business” – How to Run a Seminar or Tour Business

Learn more about all seven of these depositor’s revenge ideas at our June 24-26 International Investing & Business seminar in the High Country of the Blue Ridge Mountains. We have three places left.