Could we be 30 days from economic disaster? 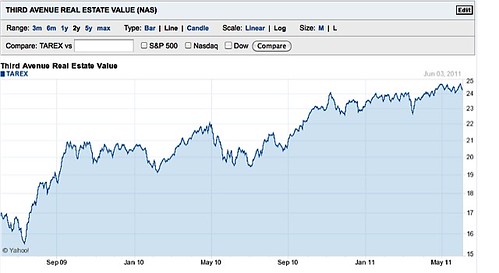 See below how this fund (chart shown at business.yahoo.com ) and four other shares can help survive another economic flop.

Moody’s has threatened to downgrade the US credit rating… they’ll review this in July… in just 30 days. If the downgrade comes, expect an economic crash… one this site has been predicting based on economic history and our 40 years of research on 15 year cycles.  The study suggests that the global economy will see one more correction… before the next even stronger recovery.

Those who are prepared to ride though the storm, can actually gain from this downturn.   Economic crunches create opportunity for brighter times after.

Last Saturday’s message said: The research on global economics suggests that we have one more terrible crash ahead in the current 15 year bear cycle.   This, hopefully, will be the end of a 15 year bear cycle that started in 1998.

Even though good times are ahead, this next crash cannot be ignored.  The legend in my family for example is that my grandfather’s brother was the last British solider killed in WWI. He was shot in some useless exercise.   My grandfather was so outraged that he left the UK and immigrated to the USA.

In other words, even if the war is almost over...  even if only one more bullet is going to be fired…  even if this long bear cycle is almost through… we have to be sure we are not ruined by that last round.

Excerpts from a June 2, 2011 New York Times article “Moody’s Warns of Downgrade for U.S. Credit” by Jackie Calmes and Carl  Hulse say:  WASHINGTON — Moody’s Investors Service warned Thursday that it might downgrade the United States government’s sterling credit rating if Congress did not increase the nation’s debt limit “in coming weeks,” putting a spur to the sputtering talks between party leaders and the White House on a plan to restore fiscal stability.

The warning, from one of the agencies whose assessments of creditworthiness help determine interest rates, amounted to a stern reminder from Wall Street to Washington that global financial markets are watching the budget battle closely and that a standoff or brinkmanship could have economic consequences.

Both sides seized on Moody’s statement to reinforce their bargaining positions, with Republicans demanding that President Obama get more serious about deep spending cuts and Democrats saying that Republicans are risking a financial crisis in pursuit of an ideological agenda.

Moody’s said a review of the credit rating was “likely” in July, given that “the risk of continuing stalemate has grown.” Its warning followed a similar one from another major ratings firm six weeks ago, and it came as the administration met Thursday with both House Republicans and Democrats in search of a deal.

We hope that America’s politicians will sort the problems out and increase the debt limit.  In fact many probably depend on it.

First, let’s remember that adding to the credit limit does not solve the problem… just the most immediate concern.  I recall my first experiences with borrowing.   I had just married at the ripe age of 19 and my father-in-law suggested we buy a new TV to start building our credit.   We hustled one Sunday morning to a TV store in the Lents district of Portland. The salesman closed hard reminding me that if I signed now, they would deliver that day and we could watch Bonanza that night in color!   We left the proud owners of a Muntz color TV with record player… including a stack of free 33 LPs.   Then came the hospital bill (our daughter). Then came new furniture and then came the new car… a 1966 Tempest Le Mans Sprint.

I was working at a gas station making $1.75 an hour and still going to college… so there were tuition bills as well.  Then came the “past due”  notices, etc. (Nightmare horrors!)

I squirmed and wiggled trying to figure out how to get out from underneath this debt and took the easy way out. I recall going to Beaver Finance on SE Mcloughlin Drive and getting what they called a “Billpayers Loan”… a loan that paid off my bills and created one payment for $33 a month.    This did not solve my financial problem… if I continued to borrow more.  This did not eliminate the debt. This did not eliminate the bad spending habits.  This just increased my borrowing costs and cost of living.  I regret to say that I had not learned the lesson yet and had to beat myself up with debt for many years more before I realized what a life sapper borrowing to consume can be.

This is where the US now stands… burdened by a huge debt that will take a monumental effort to repay and yet still overspending.   The lenders are restless and the global economic community watching.

Probably at the last moment… the politicians will agree to a debt increase… the short term easy way out.

However beware.  Our research suggests that this cycle is similar to that of the late 1930s so I am rereading “The Second World War”  a six-volume history of the period from the end of the First World War to July 1945, written by Winston Churchill.

Churchill points out how easy it would have been for Western leaders to prevent WWII, after WWI, but again and again and again their political weakness and the public’s desires to avoid taking tough measures allowed conditions to evolve to such a serious state that millions of lives had to be lost to sort the mess out.

This seems a good analogy to the handling of current global economic affairs.  Everyone wants prosperity so badly that politicians continually take the easy way out rather than face the harsh issues of debt, aging population, climactic and technological shifts.

If this is correct, then the question is “When will the current global economic equivalent to the invasion of Poland take place?”

Even if  we are 30 days from the next crunch weighing upon us, what can we do?

At our upcoming International Investing and Business Seminar we’ll look at many business ideas to earn added income (always good in tough times) plus three levels of globally diversified portfolios… small ($25,000) medium ($100,000) and large (over $1,000,000).

For example here are some of the small portfolio shares.  We’ll look at over a dozen shares that can fit in the porfolio but here is an example of five.

For example this fund would helped protect against a falling dollar and loss of pruchsing power. This is a new fund launched September last year and is a first for the ETF industry. The ETF tracks a basket of eight currencies of emerging as well as developed commodity-producing economies:the Australian dollar, Canadian dollar, Norwegian krone, New Zealand dollar, Brazilian real, Chilean peso, Russian ruble and South African rand.

We’ll look at each of these shares and many more in detail at the seminar.

If yet another downwave is headed our way, let’s gain from it rather than see our purchasing power destroyed.