Evolution in Ecuador and Guess Where

Ecuador & evolution have been familiar partners for a long, long time.

See how evolution can bring opportunity in Ecuador and one new place I’ll name below.

In June 1831, the H.M.S. Beagle set sail from England under the command of Commander Robert Fitz Roy on a 4 year surveying mission that included the 22 year-old Charles Darwin, a former medical and then divinity student at Cambridge. After three years of surveying the South American coast, the Beagle reached San Cristobal Galapagos in September 1835 and spent 5 weeks carefully charting the archipelago.

Darwin made careful observations about both the geology and biology of the islands and was particularly struck by the”differences between the inhabitants of the different islands.”

That trip to Ecuador was a unique scientific opportunity that revolutionized the way much of the world thinks.

Darwin is often credited with the theory of evolution, but many other naturalists had already developed this idea by the end of the eighteenth century.  Darwin’s great contribution to science was that he solved this mystery of how and why evolution occurred. The answer, which he called natural selection, finally occurred to him in 1839.

Now in Ecuador there is a new form of evolution that Merri and I have been following for about 15 years. This is a a global evolution created by a wave of emigrants from North America.  Many of them are immigrating to Ecuador.

How Big Is the Emigration?

We can get a feel of this wave of  Canadians and Americans leaving their homeland from a survey done by Zogby International of adult Americans on the subject of relocation outside the U.S.

With more than 115,000 respondents, the organizer of this survey had  the largest and perhaps only database on this topic.

Zogby wrote:  A total of 103,645 adult Americans were surveyed in six polls conducted from September of 2005 through December of 2006. The margins of error range from roughly six-tenths of one percent to one percent. Because the words “migration” and “migrant’ have different meanings to different people, we chose to use the words “relocation” and “relocator”.

Results shown below are from our most recent December 2006 survey of more than 21,000 Americans, unless otherwise noted in the text.

Surveys of this sort begin with one “gateway” question and a set of responses that divides re- spondents into categories before moving on to more specific questions suitable to each category. Our “gateway” question was as follows:

Are you planning to relocate to another nation for more than two years for reasons other than the requirements of the military, the government or your job?

This was intended to narrow our results to those who were voluntarily relocating. Our responses were as follows: 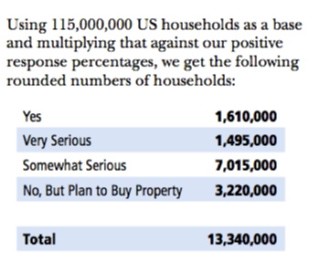 Then they asked where 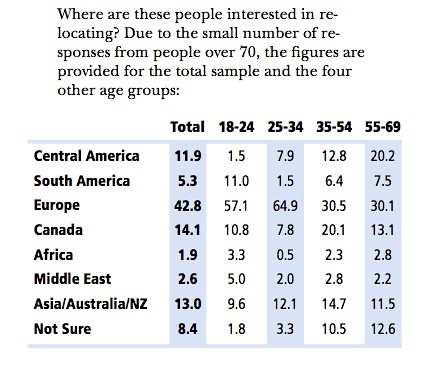 and looked at age 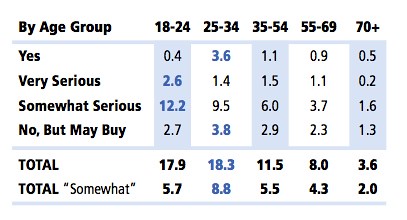 and how much they planned to spend. 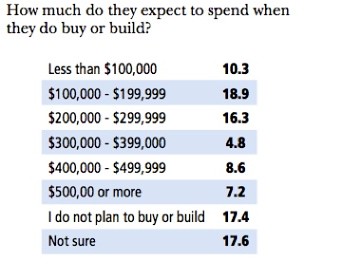 Plus their income breakdown and… 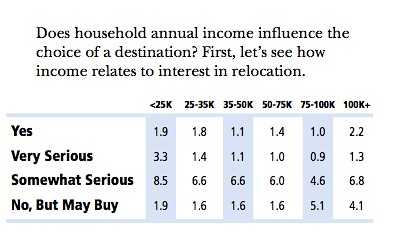 where they would go by income group. 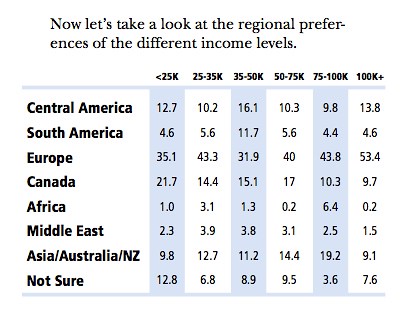 Here is what I gained from studying this report.

#1: About 13 million Americans planned to leave the US full or part time or at least own property abroad.

#4: The group with the largest percentage who were moving were those with income over $100,000.

#7:  Not in the report but it has been our belief… that we are now seeing as fact is that Ecuador will get a large percentage of the South American expats.

That study was undertaken in 2005 and 2006 at the height of the Western world’s easy credit, real estate bubble… before it burst.

Many people were feeling very different about money at that time.

I suspect that if the the survey were taken now the numbers would be larger but for different… more economically pressing reasons.

Fortunately we have something even better than research like the Zogby study.  We have experience.   Research shows what people say they are going to do.

Having brought thousands of people to Ecuador… we have observed what people actually do.

To date a majority of readers and delegates by far have purchased and or settled mainly in three areas: Imbabura, Cuenca and Ecuador’s mid coast.

Potential Bumps Up as Well

Each of these three areas has also have potential good news that will make them even more attractive.  Imbabura has been a bit far from the Quito Airport… almost two hours away.  Quito’s new airport is 45 minutes closer to Imbabura, almost done… the access roads are being put in and December 2012  is the planned opening.

The new Quito Airport may also give Cuenca some help.  The existing airports in Quito and in Cuenca are in town, close to heavy population and cannot be expanded.  Their short runways prohibit day lift offs of fully loaded large planes so all international flights tend to land late at night thus requiring Cuenca travelers to spend a night in Quito.

The new Quito Airport is at a lower altitude and have longer runways (international standards) so flights may arrive in time to allow connections to Cuenca the same day.

Bahia… the town to be on Ecuador’s mid coast  was blocked by the Chone Estuary… and often a two hour wait for a ferry. A bridge across the Chone is now complete. New roads from Quito have also been built and I predict that soon the airport in San Vicente (for Bahia) will be  expanded.

All of this means that these three areas are likely to become even more attractive.

On top of this, there is another great asset that will help Ecuador evolve:  US real estate developers.

Many developers who have great skill but are in trouble or out of business up north are bringing their skills down south.

This adds two benefits.  First, many of these developers really are good. They have a lot more experience than Latin developers.

Second, many of these developers are thinking sustainable! Part of the evolution in North America will help real estate construction in South America.

Take, for example, the US developer, Warren Adams, who purchased about 60,000 ares in Patagonia.

A Fortune article at management.fortune.cnn.com/2011/03/10/warren-adams-searching-for-profits-and-saving-patagonia/

Says:  Warren Adams, As I warm by a fire in the living room of the Patagonia Sur eco-lodge, Adams, a lean, athletic man whose green eyes relay a quiet intensity, explains that Melimoyu (pronounced melly-moy-you) is only one of six holdings that Patagonia Sur (sur means “south” in Spanish) owns in the region. In all, the company has bought some 60,000 acres — about half the size of New York City — in some of the most remote and beautiful areas of Chile (see map). On this land the company plans to engineer as many as 10 profitable, environmentally sustainable businesses. The goal: to create proof that land can be developed for profit and remain unharmed, a vastly different theory from previous schools of land management. “It’s a model,” says Adams, “we hope to scale in developing nations around the world.”

He may sound like a wide-eyed visionary jousting at green windmills, but Adams is backed by an impressive roster of 40 hard-nosed investors who have put up a total of $20 million so far. (The company hopes to raise as much as $200 million.) They include Howard Stevenson, a professor of entrepreneurship at the Harvard Business School, and John Fisher, founding partner of the Silicon Valley VC firm Draper Fisher Jurvetson.

So far Adams has created three income streams — an ecotourism venture that works on a vacation club/membership-fee model, a land brokerage, and a carbon-offset business that sells credits to schools and corporations. In the future Adams plans to sell land for vacation home and eco-lodge developments and consult with local salmon farms on how to fish more sustainably. Perhaps one of his most original ideas is to float millions of gallons of pure water in giant baggies from his glaciers to drought-stricken areas of the world, but more on that later.

Adams has no illusions about the difficulty of his task. When asked what keeps him up at night, he says he worries about achieving a balance between development and conservation. At what point does sustainable development become exploitative? How many ecotourists and vacation homes are too many? What effect will taking millions of gallons of water from his land to sell overseas have on the ecosystem? Adams is creating the first private land trust in Patagonia to permanently protect the company’s land. Will it hold up in the courts if challenged? Will powerful mining and agricultural interests in Chile start eyeing its gold and timber wealth as Patagonia becomes more open to the outside world?

We believe sustainability is what used to be called practicality. And that social and environmental responsibility are what build the social and environmental capital that make great communities both more resilient and more valuable than most of what has been built in the last fifty years. Kalu Yala is simply an answer to the questions we have encountered over our lives and in the last four years of working in a special place during a difficult economy. With your help, we hope to get them right, to unearth the questions that still need answering and to share these answers with the world so that all who wish might be able to use them.

A truly sustainable community, Kalu Yala is founded on the core tenants of culture, new urbanism architecture, organic food, wellness, recreation, education, preservation and conservation of the natural environment. Kalu Yala will be designed using an innovative process called “Naked Development”. This transparent and collaborative effort utilizes input from innovative leaders in organic farming, finance, sustainable architecture, community design, future residents of Kalu Yala and the online audience. The result is a living community model, able to evolve in response to the demands of its visitors and residents, and driven by social, environmental and economic purpose.

In short, property developers are evolving also. Perhaps hardships in North American real estate have provided the lessons that teach there is more to developing than squeezing our short term profit from every square inch of land.

This is while we’ll be keeping an eye on the Hacienda Palo Alto development in Cabuyal north of Bahia Ecuador. 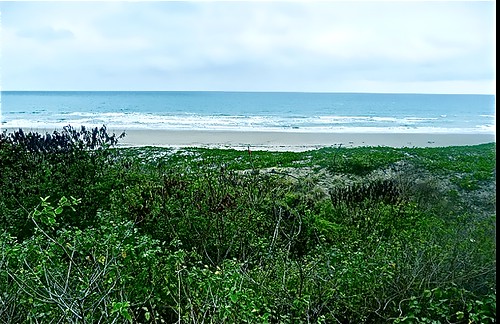 We have long written that when the bridge over the Chone was complete, the coast from San Clemente to Canoa to Pedernales would be one of the best investment opportunities on the planet.   There is plenty of demand for coastal real estate in this area, but there has been a lack of quality product with just one good development in Jama

Now a Latin developer, with US roots… Unexpected Development, is building in this area.  It is also involved in several projects in Ecuador, Uruguay and Honduras.

Unexpected Development is starting a new opportunity on the coast of Ecuador, called Hacienda Palo Alto, which consists of 183.5 hectares (453 acres) with 1.2 kilometers (appx. .72 miles) , of which 955 meters (appx. 3,000 ft.) is for the development/houses etc.

This is what the beach looks like looking to the south: 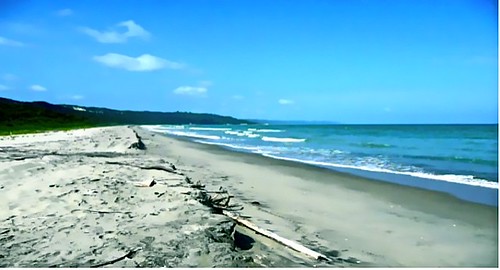 The property is lush with flora and fauna, and features howler monkeys, parrots, wild orchids, streams, and a river. There are many hiking and horseback trails that have already been created, and 300 teak trees, 600 white cedar, and 400 maracuyá (passion fruit trees) have recently been planted, as well as hundreds of palm trees lining the beach.

Unexpected Development is conserving and preserving a majority of the land and will build on only a small portion.

The company has its residential split and urbanization permits for 166 lots with an average size of roughly a half-acre lots and plans to begin selling lots in the next couple of months.

Unexpected Development is sponsoring an updated Bahia Report offered free to our readers.  Sign up for the FREE Bahia report here.

The new place where we are seeing evolution? Cuba. See tomorrow’s message why.

See how to attend an Ecuador real estate tour FREE