I have sold the last of my Turkish shares.

July 2010, I recommended investing in Turkish equities.  I invested in the Jyske Invest Turkey Equity Fund at that time.

You can see why I invested in Turkey then by clicking here.

I made some nice profits and when the share price had doubled by November 2010, I sold half my shares.

There are three reasons why we have eliminated our Turkish holdings.

First… as the chart of Turkey’s ISE National 100 Index from Bloomberg.com below shows that this market has enjoyed quite a good run… up almost 200% in two years and feels top heavy to me. 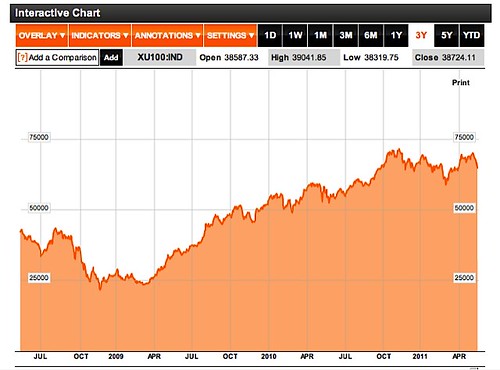 Second, Merri has been feeling skittish and keeps saying, “We should sell out Turkey shares”.  She never knows why she says these things and cannot give me a reason… but I have learned that these feelings she has…seemingly totally unfounded by any reason…are spot on.

Third… There are concerns about radiation in Turkey.

A Youtube video of a speech by Dr. Helen Caldicott mentions that Turkish produce is high in radiation from Chernobyl.

Dr. Caldicott, (73) is an anti nuclear advocate who received her medical degree from the University of Adelaide Medical School in 1961. She founded the Cystic Fibrosis Clinic at the Adelaide Children’s Hospital in 1975 and subsequently was an instructor in pediatrics at Harvard Medical School and on the staff of the Children’s Hospital Medical Center, Boston, Mass., until 1980 when she resigned to work full time on the prevention of nuclear war.

She co-founded the Physicians for Social Responsibility, an organization of 23,000 doctors committed to educating their colleagues about the dangers of nuclear power, nuclear weapons and nuclear war.  She was the Founding President of the STAR (Standing for Truth About Radiation) Foundation and has received many prizes and awards for her work, including the Lannan Foundation’s 2003 Prize for Cultural Freedom and 21 honorary doctoral degrees, and she was personally nominated for the Nobel Peace Prize by Linus Pauling – himself a Nobel Laureate.

Then Merri and I were exposed to excessive doses of radiation from Chernobyl.

My report “Protect Against Radiation” shows seven ways we regained and even improved our health. You can order this report to play on your computer or Kindle from Amazon.com. Get details here.
Gary
Join Merri and me this June 24 to 26 along with Thomas Fischer of Jyske Global Asset Management to see our portfolios in the next quarter. Meet Bonnie Keough and Roberto Ribadeniera for an Ecuador export workshop.