One reason Merri and I spent a lot of time in Ecuador was to learn how nutrition affects success.   Nutrition is a huge success key because surviving shifts includes using the range of frequencies we know as taste. See below how to gain from change.

This is the last week to enroll in the upcoming Ecuador shamanic health tour.  See details and why learning ancient ways to maintain good health, a clear mind and strong body grow in importance below. 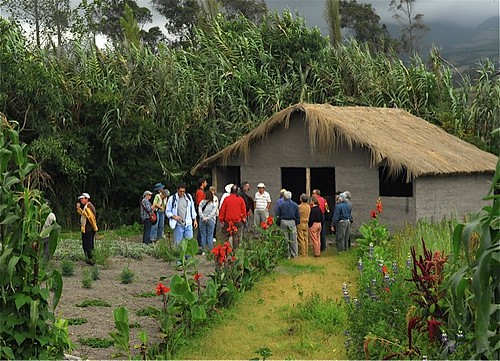 Shamanic tour delegates at the Cotacachi organic gardens helped by US department of Agriculture and Peace Corp.  The gardens experiments with growing nutritious food in ancient Andean ways.

The potential for stagflation (inflation during a recession) in the western world grows.

An excerpt from a Reuters based article “US economic growth slows, inflation surges” at CNBC TV’s site www.moneycontrol.com outlines how the forces are in place when it it says:  US economic growth braked sharply in the first quarter as higher food and gasoline prices dampened consumer spending, and sent a broad measure of inflation rising at its fastest pace in 2-1/2 years.

Another report on Thursday showed a surprise rise in the number of Americans claiming unemployment benefits last week, which could cast a shadow on expectations for a significant pick-up in output in the second quarter.

Growth in gross domestic product — a measure of all goods and services produced within US borders — slowed to a 1.8% annual rate after a 3.1%fourth-quarter pace, the Commerce Department said. Economists had expected a 2% growth pace.

Output was also restrained by harsh winter weather, rising imports as well as the weakest government spending in more than 27 years.

US government debt prices rose after the data, while stock index futures added to losses. The dollar extended losses against the yen and the euro.

Growth in the first quarter was curtailed by a sharp pull back in consumer spending, which expanded at a rate of 2.7% after a strong 4 percent gain in the final three months of 2010.

Rising commodity prices meant the consumers, which drive about 70% of US economic activity, had less money to spend on other items. The report also underscored the pain that strong food and gasoline prices are inflicting on households.

A broader measure of inflation, the personal consumption expenditures price index, rose at a 3.8% rate — its fastest pace since the third quarter of 2008 — after increasing 1.7% in the fourth quarter.

The core index, which excludes food and energy costs, accelerated to a 1.5% rate – the fastest since the fourth quarter of 2009 — from 0.4% in the fourth quarter. The core gauge is closely watched by Fed officials, who would like it around 2%.

Many economists believe that bad weather was one big reasons for the drawback and that growth would resume.  Let’s hope so.  Western stagflation would have an enormous ripple affect dampening economic growth around the world.

Even if we do not have accelerated inflation, we must cope with the world’s accelerating pace of change  stimulated by the introduction and advancement of more and more new technology.

One of the biggest risks many face is the rising cost of health care and the inability to get good health care in an emergency. The simple solution is to remain healthy!

We have been looking at ways to adapt and benefit from an increasingly mobile landscape in our “Surviving Shifts” series.  The ability to embrace change is of growing importance to survival and success. Accelerated change requires accelerated learning and increased intelligence which we can gain through frequency modulation.

Our senses regulate how smart we act.

Our senses are our mind’s interpretation of different ranges of frequency.

Because taste is frequency, good nutrition can make us smarter. 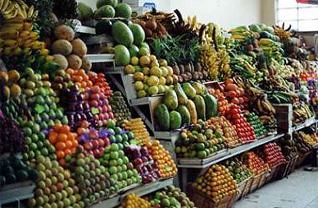 Scientists know that overweight and obese people are at a greater risk for memory problems and other cognitive disabilities, but the latest study is one of the first to indicate that substantial weight loss improves brain health.

John Gunstad, an associate professor of psychology at Kent State University, and a team of scientists from several research centers analyzed memory tests taken by 150 people who weighed an average of 300 pounds. Many had several health problems, such as high blood pressure, type 2 diabetes and sleep apnea.

Of that group, 109 of them then had bariatric surgery — mostly gastric bypass surgery, which creates a smaller stomach and bypasses part of the small intestine. The other 41 obese patients did not have surgery.

After 12 weeks, all participants took the same set of memory tests a second time. Findings:

The surgery patients, who had lost an average 50 pounds, showed improvement in multiple cognitive abilities, including memory and executive functioning, which includes organization skills.

It appears that there is another physiological process that is causing these improvements in memory, he says. “We’ve known for a while that diet and exercise may also improve cognition, so it’s possible there are several factors that are causing these changes.”

He says it’s a logical conclusion that as the body becomes healthier, the brain would become healthier also.

Good nutrition also promotes good health!  In fact nutrition may be the second most important factor in health… after consciousness. 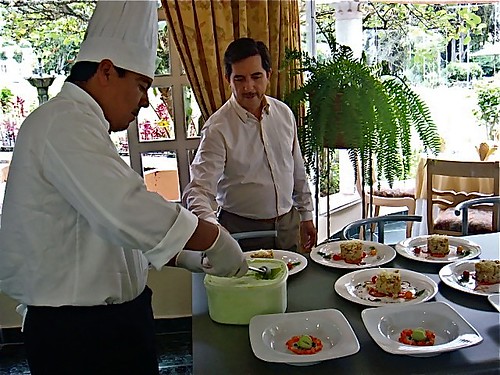 There are a number of  ways you can improve your nutrition and enhance intelligence. One nutritional plan comes from the ancient wisdom passed on by Ecuador’s shamans. Their shamanic nutritional plan provides delicious menus that improve digestion, reduce weight, increase energy, reduces toxicity in the system and balances the hormonal system so cravings and excessive hunger disappear.

The cornerstones of the Andean nutritional program are:

#1: Eating a balance of fat, carbohydrates and protein.

#4: Eating in good spirits at the right times.

#5: Chewing in the correct way.

Here is a review of this shamanic nutritional program.

Eating a balance of fat, carbohydrates and protein.

This way of eating keeps protein balance without excessive amounts of meat using quinoa, eggs, cheese and yoghurt instead. A great deal of poor health and stress is tied in to the underlying hormonal disturbance caused by the excess production of insulin. This imbalance normally comes from too much food and incorrect protein, carbohydrate, fat balances in the diet. Every time we eat, hormones in our body will change, either good or bad. Delicious food with a balance of 3 parts carbohydrates, two parts protein and one part fat has the power to orchestrate beneficial hormonal changes in our body.

Eating the correct combinations of food for ideal digestion.

Andean nutritional ideals also focus on combining foods in a way that avoid fermentation in the stomach. Foods and spices are divided into three types: neutral, savory and sweet. Neutral can be mixed with savory or sweet, but no savory and sweet foods are mixed. The main neutral foods are grains, cereals, nuts and seeds. Meat and most vegetables are savory. Fruits are sweet. Cereals are ground and soaked to improve their digestibility. Sweet spices include cinnamon, nutmeg, allspice, ginger, mint. Savory spices include salt, pepper, chiles, oregano, corriander, bay leaf, cumin, saffron, fennel.  No two fats are mixed nor are fruit types.

Eating clean organic food prepared and served by happy, joyful people and eating in good spirits at the right times.Food should be beautiful as well…like this feta salad served at our last course. 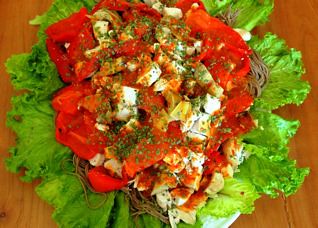 Candace Pert, Ph.D., is a neuroscientist who was awarded a Nobel prize for her groundbreaking work that shows the mind is not just in the brain but in the entire body. The mind and body communicate using the chemistry of emotion. Short chains of amino acids called peptides and receptors are found in the brain, stomach, muscles, glands and all major organs. They send messages back and forth linking mind and body. When we are happy our entire body is happy and this chemistry has a dramatic impact on our food and digestion.

There are times of the day when each of these elements are most active. The digestive fires are highest at 12 noon, so a savory meal is normally eaten at this time.

A sweet breakfast accommodates a more sluggish digestive time and the evening is set aside for a purifying fruit meal so the body can use the midnight fire energy to cleanse rather than digest.

Three herbal teas are served. In the morning cinnamon tea is served. Before lunch ginger tea lights the digestive fires and before sleep chamomile tea enhances a good night’s rest.

Part of good nutrition comes from eating, sleeping and exercising at the correct times.

The yatchaks also suggest we eat only when hungry and the stomach is empty so we recommend eating only every four hours. For cravings between herbal tea is best and juices can be added if it is uncomfortable to wait for the next meal.

Chewing in the correct way.

Correct chewing releases nutrient molecules so energy from food is more quickly released and assimilated. This allows the brain to recognize flavors and release the correct digestive juices for that food. Proper chewing does even more because it stimulates the bodies sphincter (or ring) muscles that surround the various orifices of the body.

Ring muscles include the muscles around the eyes, the nostrils, anus, urethra, genitals and the mouth. In a healthy body, all sphincters work together, contracting and relaxing simultaneously. They also activate the respiratory system, the gastrointestinal system, the circulatory system, the lymphatic system, the musculoskeletal system and the urogenital system. Ring muscles are ultimately responsible for putting all the other muscles and all the organs of the body to work.

Chewing correctly stimulates the ring muscles and consequently helps exercise all our muscles.

Fruit types also exist and are never mixed. Citrus stands together, but is not mixed with other foods. Watery fruits (apples pears, plums and grapes) can be mixed. Bananas are eaten alone only or with dairy only. Pineapple and melons are also eaten alone.

There are three purifying meals. The first most gentle purifier is a water combination of apples and grapes. The second meal is an entire pineapple and the third, an entire watermelon.

Organic coffee, tea and cocoa are great purifiers rich in antioxidants. Coffee and some tea is avoided by those who do not want caffeine. We recommend moderation and serve only organic, fair trade coffee and tea. Coffee and tea (without milk) are neutral and can be consumed before or with any meal.

The Andean shamans also brew a cleansing tea made from cinnamon, sweet pepper and chamomile.

Balancing nutrition with exercise and sleep.

Gentle exercises enhance stress release and reduce hunger.  Going to bed before the evening fire cycle begins at 10 PM helps reduce heavy meals that are not well digested during sleep.

Sight, sound, smell, touch and taste… they are all frequencies and as such they have an impact on how we think.  Eating right modulates the frequencies we call taste to make us happier, healthier and smarter so we can cope… survive and gain from increasing shifts.

Links to the “Surviving Shifts” series.