Radiation Protection Q & A Part One

Safety from radiation… safety  in Ecuador and safety anywhere is the focus in this Saturday Q & A.

See questions answers and comments about the following subjects below:

#1: Safety from Radiation. See below

#2: Protect against radiation and travel in Ecuador… or anywhere.

#1: Safety from Radiation. Two days ago I introduced a Protect Against Radiation report.  Merri and I immediately prepared this, outlining seven steps we took after being exposed to high levels of radiation from Chernobyl.  The fact that we have faced radiation exposure problems and overcome them put us in a unique position to help our readers… and more.

I thought long and hard about how to share this.  We are in a unique position to help and want to make this information available to as many readers as we can.  So we sent the report to all our paid subscribers free.

Because this data reaches beyond our readership we published the report with Amazon.com’s self publishing associates so anyone can get the report on their Kindle.   Amazon obviously won’t let us offer a free of report so we have offered the Protect Against Radiation Report for $4.99 rather than our normal $29 rate for a report of this size.

I believe the knowledge Merri and I gained from being radiated during Chernobyl saved our lives. I know that many of our readers have a lot of fear right now so we decided to share this quickly because the problem appears to have grown even more serious.

A March 16, 2011 New York Times article entitled “U.S. Calls Radiation ‘Extremely High;’ Sees Japan Nuclear Crisis Worsening”
by David E. Sanger, Matther L. Wald and Hiroko Tabuchi says:  WASHINGTON — The chairman of the United States Nuclear Regulatory Commission gave a far bleaker appraisal on Wednesday of the threat posed by Japan’s nuclear crisis than the Japanese government had offered. He said American officials believed that the damage to at least one crippled reactor was much more serious than Tokyo had acknowledged, and he advised Americans to stay much farther away from the plant than the perimeter established by Japanese authorities.

The announcement opened a new and ominous chapter in the five-day-long effort by Japanese engineers to bring the six side-by-side reactors under control after their cooling systems were knocked out by an earthquake and a tsunami last Friday. It also suggested a serious split between Washington and its closest Asian ally at an especially delicate moment.

Mr. Jaczko’s most startling assertion was that there was now little or no water in the pool storing spent nuclear fuel at the No. 4 reactor of the Fukushima Daiichi Nuclear Power Station, leaving fuel rods stored there exposed and bleeding radiation into the atmosphere.

As a result, he said, “We believe that radiation levels are extremely high, which could possibly impact the ability to take corrective measures.”

A forecast by the Comprehensive Nuclear Test Ban Treaty Organization suggests that the radiation could reach North America soon. Here it shows how weather patterns this week might disperse radiation from a continuous source in Fukushima, Japan. 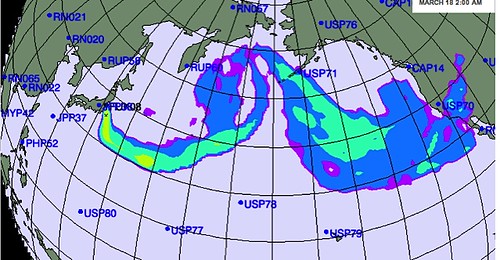 Plus a number of articles show that one solution is potassium iodide, but some are having problems getting it.

A BBC article two days ago said: Radiation Pill sales surge in US. Several potassium iodide manufacturers are reportedly out of stock.  Fears of radiation sickness stemming from the unfolding nuclear crisis in Japan have prompted a surge in US sales of potassium iodide.  Potassium iodide (KI), a salt, floods the thyroid gland with non-radioactive iodine which lessens the amount of radiation the gland can absorb.  Pharmacies do not generally carry KI, but several manufacturers have reported being out of stock.

The US government has a stockpile on hand in case of emergencies.

Online retailer nukepills.com said via its Twitter feed that it had sold out of KI pills on Tuesday.

It received 3,800 orders in 18 hours on Sunday and has shipped 50,000 pills to Tokyo, with the help of Harvard Medical School.

Debby Fleming Wurdack, co-owner of Fleming Pharmaceuticals, which produces a KI solution on demand, told the BBC the firm would be out of stock by the end of the day.

The problem of getting radiation protection was not limited to the USA! A Canadian TV website says: Radiation fears spark rush for iodine pills.  Stores that sell iodine supplements are selling out as people react to the possibility of radiation exposure from leaks at nuclear plants in Japan.  Since word emerged that Japan has begun distributing potassium iodide tablets to residents near the Fukushima facility, other global regions have noted a spike in sales of the pills.

In Russia’s Far East, not far from Japan, residents are buying up the pills in droves, according to a report in the Wall Street Journal — even as the Russian government insists that radiation levels in Russia remain at normal levels.

There are reports that packets of potassium iodide pills are attracting bids of up to US$540 on eBay. And British Columbia’s top medical officer, Dr. Perry Kendall, also noted a run on iodine tablets.

The article goes on to say that Dr. Kendall ordered pharmacists not to sell the pills.

One reader from British Columbia had something to say about this when he ordered our Protect Again Radiation Report: The medical services of BC have told the pharmacists NOT to sell us the potassium iodine!

A New York Times March 14, 2011 article entitled “Radioactive Releases in Japan Could Last Months, Experts Say” says: WASHINGTON — As the scale of Japan’s nuclear crisis begins to come to light, experts in Japan and the United States say the country is now facing a cascade of accumulating problems that suggest that radioactive releases of steam from the crippled plants could go on for weeks or even months.

The emergency flooding of stricken reactors with seawater and the resulting steam releases are a desperate step intended to avoid a much bigger problem: a full meltdown of the nuclear cores in reactors at the Fukushima Daiichi Nuclear Power Station.

So what can one do?  Here is a problem that could be serious. Many (including me) doubt that the Japanese, US or Canada government will give us the total story. Instead our fear is that politicians will downplay any negative potential for political and panic reasons.

How can we adjust our lives to cope with what may become a long term reality.  There appears to be many things we can do.

A 2008 report that was in Reuters, The Telegraph and I suspect many other papers says Red wine ‘can protect against radiation’ suggests that wine can help and says: Scientists may soon recommend that it is best you start drinking heavily and not just because you may be  facing oblivion.

According to the latest research, red wine – along with its many other claimed benefits – may also protect you from radiation exposure.

A team at the University of Pittsburgh School of Medicine have discovered that resveratrol, the natural anti-oxidant found in red wine, can protect cells from the damage caused by radiation.

In experiments on mice the scientists found that when combined with the chemical acetyl and administered before radiation exposure it protected the cells and helped prevent death.

The results, to be presented to the American Society for Therapeutic  Radiology and Oncology, could lead to drugs to counteract poisoning in the wake of a nuclear emergency or attack.

“New, small molecules with radioprotective capacity will be required for treatment in case of radiation spills or even as countermeasures against radiological terrorism,” said Dr Joel Greenberger of the Department of Radiation Oncology at the university.

“Small molecules which can be easily stored, transported and administered are optimal for this, and so far acetylated resveratrol fits these requirements well.

“Currently there are no drugs on the market that protect against or counteract radiation exposure.”

The study was overseen by Pitt’s Center for Medical Countermeasures Against Radiation, which is dedicated to finding radiation protecters that can be administered in the event of a large-scale radiological or nuclear emergency.

Don’t go out and load up on red wine!  The article suggest that more is involved and I suspect that the downside of the alcohol would be worse than the upside of the protection. Non fermented fruit would be better.

Blaine Watson, our friend and Vedic astrologer,  sent some ideas along in his daily emailing.

Blaine has worked with some of India’s top healers and these ideas come from a raw food advocate David Wolfe so the ideas below are worthy of research.  Note below that Blaine will conduct the Investing and Business Beyond Logic seminar in Mt. Dora, April 9 and 10, 2011.

#2: Kelp and other seaweeds (high in natural iodine)

#5: Chlorella (being 10% chlorophyll, it’s a great detoxifier–wheatgrass is only 0.25% chlorophyll)

#8: Sea salt or salty miso (combats toxic halides in the body such as chlorine, bromine, etc.)

#10: Earthing, or Grounding to the Earth (walking barefoot on the soil, swimming in lakes, etc, allows you to pick up the much-needed electrons from the Earth, which help reverse the damage done by radiation)

#11: Wolfe also recommends high-dose vitamin C, as much magnesium as you can get down (raw cacao is an excellent source), selenium (Brazil nuts are loaded), and coconut products (natural organic coconut cream and coconut oil), which are very supportive to your thyroid.

#12: I would add astaxanthin to the list, which is the most powerful antioxidant found in nature. It has such potent anti-radiation properties that it’s been shown in scientific studies to protect people from sunburn!

Some of these products are available at your local nutrition center. Others you’ll have to order online. Some of the sites I trust for the less common items are:

So there may be some steps we can take to improve our lives despite any increases in radiation.  Merri and I know that we are healthier today then we were before we were exposed to high levels of radiation.   The exposure set us on a path to improve our health and the benefits we gained have surpassed the damage done by the radiation.

We do eat a lot of seaweed and take sun chlorella everyday just to combat the ravages of modern life.

We explain why in our Protect Against Radiation report.

#2:  Protect Against Radiation and Travel in Ecuador… or anywhere (click here).

See More information on radiation problems in the links below.

Red wine can protect against radiation