Here is a micro business niche based on Mark Twain’s famous quip… “The rumors of my death are greatly exaggerated.” 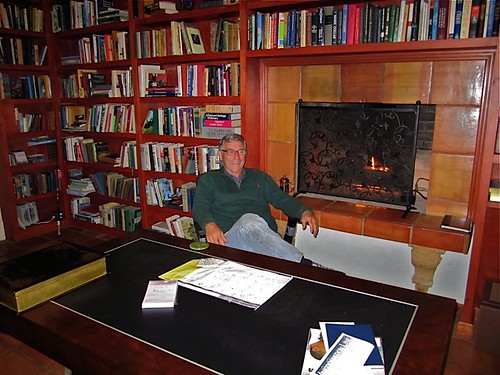 You can see by the state of my Florida office that I really love books!

So I was very interested to read that the rumors of the demise of the micro business book store might be truly exaggerated.

We can learn a lot by studying a January, 2011 USA Today article  “Is there hope for small bookstores in a digital age?” by Bob Minzesheimer.

This article says:  Don’t tell Suzanna Hermans that cozy, well-stocked bookstores such as hers have no future during a digital age in which e-books are just a click away.

Years after the rise of such mega-chains — and the explosive growth of Amazon.com’s discount book business — helped kill many small bookstores, e-books are sparking another shake-up.

Owner Suzanna Hermans is about to enlarge Oblong Books in Rhinebeck, N.Y. She says the independent store emphasizes community.

I know people think of independent bookstores as struggling underdogs,” says Hermans, co-owner and manager of Oblong Books in this picturesque Hudson Valley town. “But if I was struggling, I  wouldn’t be expanding.” She’s about to break through a brick wall to enlarge her children’s section “for my customers of the future.”

By emphasizing service, her store’s popularity as a community gathering spot and even a new — and somewhat counterintuitive — plan to help her customers order e-books, Hermans, 26, is betting that her small store will continue to buck prevailing winds in the book business.

The Liabilities of Size & Experience

This article reminds me of the statement by Ian Pierson, the Futurist for British Telcom, “The value of a company is its ideas less its size and experience”.   Big businesses, as we’ll see in another excerpt below of the same article, have a hard time adapting to rapid change.    Micro businesses can be fleet of foot and take advantage of shifts if they’ll embrace the change.

The article goes on to say: Increasingly, consumers are ordering print books online and reading e-books delivered instantly to mobile devices and e-readers such as Amazon’s Kindle and Barnes & Noble’s Nook.

After years of growth, the largest bookstore chains are downsizing:

Borders reports that as of Dec. 1, it had 507 “superstores,” down from 515 two years ago, and 169 Waldenbooks and Borders Express outlets, down from more than 700. As part of a proposed financial restructuring, it vows to close “underperforming” stores “as soon as practical.” Borders hasn’t confirmed or denied reports that 200 stores could close.

Borders, the nation’s second-largest book chain with about 500 “superstores,” has delayed payments to its vendors, faces a potential bankruptcy filing and is widely expected to announce store closings soon. Barnes & Noble, the largest chain, has embarked on what it calls a “consolidation” of its 717 superstores as it pursues an increasingly digital strategy. It already has closed all of its 798 B. Dalton mall outlets.

Barnes & Noble has 717 stores, down from 726 two years ago. It has closed all of its 798 B. Dalton stores and plans to close six to 10 superstores a year in each of the next three years.

Small bookstores which embrace change can take advantage of the big store decline and electronic readers!


The article continues: As measured by numbers, bookstores are in inevitable decline, says Michael Cader, founder of Publishers Lunch, a digital newsletter. At the same time, he says, some “modestly sized, locally connected independent stores have found a successful formula” for surviving in today’s market.

And in a bold move for the owner of a small bookstore, Hermans is embracing e-books. Oblong, which Hermans co-owns with her father, Dick Hermans, 62, is one of about 200 independent bookstores in a digital partnership with Google eBooks, launched in December.

The unprecedented partnership allows customers of independent bookstores to buy e-books via a link on the stores’ websites to the Google eBook-store (which also sells e-books directly). During its first month, Hermans says, she sold fewer than 10 e-books. But beyond two small signs in the store and an announcement in the store’s e-newsletter that goes to 2,000 readers, “we’ve yet to really promote it,” she says.

In print books, booksellers generally are charged 50% of the publisher’s list price; with e-books, which usually are cheaper, Hermans says she gets to keep 20% to 40% of the retail price.


Many publishing consultants see physical bookstores going the way of record shops and video rental stores, but the switched on bookstores see themselves as more than bookstores. They offer a community service.

Herman’s bookstore according to the article offers free Wi-Fi, overstuffed reading chairs and is expanding its children’s  books. This is smart since children are less likely to have an electronic reader.  Plus services for children that help time stressed moms and dads and fill voids left by waning educational systems hurt by budget cutbacks… will be a growing trend.

Herman says: “Bookstores help create community for people in the places where they live. People may think they can live online, but in reality they live in real towns and cities, and physical bookstores help to enrich those places.”

She also takes advantage of this age of over information.  Millions of books can be found online and honest “curator skills” of local booksellers can help readers find books that suit the individual.

These successful bookstores do not discount.  Savvy bookstore owners offer personal service… integrity and authenticity in choosing books.  They staff their stores with assistants who know books and who can make guests want to buy a book now.

They are incorporating digital-delivery kiosks, on-demand printing, self-publishing services and are evolving into information reading – publishing – idea – children developing stores, more than simply bookstores because they see change coming and look for the silver lining… not the clouds.

I have increasing numbers of readers share with me the fact that due to inflation and county, state and federal cutbacks, they can no longer retire.  Don’t!  To serve is to live. Look for change.  Seek your passions and blend them with change to create your own microbusiness.

See how to be involved in a publishing micro business

See how to find your passion for a micro business through playing.