Micro Business Power on the Net

There is micro business power in narrowband on the net. 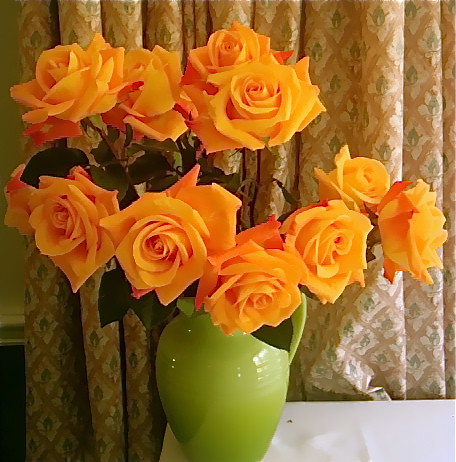 This is the last day left to order Ecuador valentine’s Roses.

There is such power in broadband that we are seeing events taking place right now… that will dramatically change our lives… and could bring an era of incredible peace… or war. I am still trying to absorb the big picture, but whatever comes… expect some really big change due to events in the Middle East. 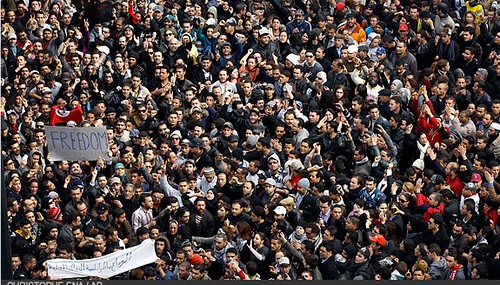 Photo from Times article below about Tunisa demonstrations for democracy.

One lesson we can gain from… for sure… is about the power of broadband and how we can convert this to narrowband for profit. 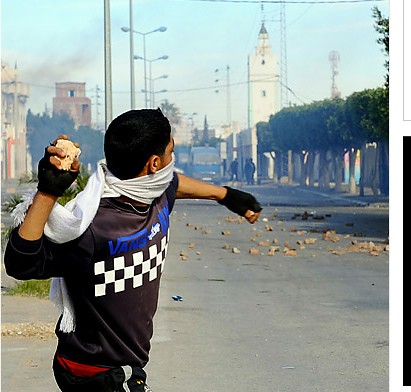 Let’s look at the evolution of revolution in a phrase.

“Take over the TV”

“Shut down the cell phone system and the Internet.”

That’s the evolution of power.

When the French stormed the Bastille, a medieval fortress and prison in Paris on the night of July 14, 1789 they symbolized the power of the middle class. This fortress represented Royal authority in Paris and its fall was the flashpoint of the French Revolution, and became an icon of the French Republic and began the shift of authority to the common man.

Since that time… slowly slowly democracy has continued to spread.

The lesson we can benefit from is how the masses have used technology to exert its authority…  from ladders to breach a fortress… shifting to broadcast and the radio… then TV and now democracy has a new weapon… broadband.

We can use this potent political instrument in our micro business as well.

A Times magazine article last week entitled “Tunisia’s Nervous Neighbors Watch the Jasmine Revolution” by Vivienne Walt reviewed the importance of the Internet and Mideast revolutions that began in Tunisia when it said (Bolds are mine):  No bomb exploded announcing the start of the Jasmine Revolution, and in the end, there was no iconic figure — no Nelson Mandela or Vaclav Havel — to declare its stunning victory. Instead, the fuse for the Arab world’s first successful popular uprising was lit when a small-town Tunisian policewoman slapped a fruit seller.

The four-week revolt leaped from town to town until it engulfed Tunis. El Général’s song “Rais Elbled” (“President of the Republic”) became the protesters’ anthem, with thousands in the streets belting out its angry lyrics: “Mr. President, your people are dying.” The Jasmine Revolution, named for the national flower, needed no leaders to rally the protesters or organize the demonstrations. Instead, the revolt was refueled by a steady stream of anonymous text messages, Twitter and Facebook updates. Documents posted on WikiLeaks, in which U.S. diplomats cataloged the corruption at the highest levels of government, deepened the rage. Mobile-phone videos posted online documented the government’s brutal response, including the police beatings and the shooting of some of the 100 or so protesters who died.

Whatever happens next, Tunisia is already the stuff of history. Revolution is rare in the Arab world, which has for the most part remained untouched by democratic movements and economic change.

The Jasmine Revolution unfolded on live television before an Arab audience — THANK YOU AL-JAZEERA, read one banner at one demonstration — that could hardly have failed to grasp its significance. Bouazizi’s martyrdom inspired several copycat immolations in Algeria and at least one each in Mauritania and Egypt. In Algeria, where protests by jobless youths predated those in Tunisia, there were attempts to replicate the Jasmine Revolution’s use of social networks and YouTube.

Even before I could get this message written Mubarak in Eygpt had agreed not to rerun as President and Jordan’s king Abdullah on Tuesday, February 1, dismissed his government and appointed Maarouf Al Bakhit, an ex-army general head the country’s new government.

By the time you read this… more governments may have fallen in the Middle East… all removed by the power of the internet and cell phones!

Egypt tried to stop the power of the internet.  A New York Times article on the subject stated:   Internet and cellphone connections have been closed or restricted in Cairo, Alexandria and other places, cutting off social media Web sites that had been used to organize protests and complicating efforts by news media to report on events on the ground. Riot police took to the streets of Cairo before the Friday noon prayers that in many parts of the Islamic world have been a prelude to unrest as worshippers pour onto the streets.

The protests have underscored the blistering pace of events that have transformed the Arab world, particularly among regimes that have traditionally enjoyed the support of successive administrations in Washington.

The police presence in Alexandria on the Mediterranean coast was strongest in the center of the city. At the Sidi Bishir mosque outside the center of town, a dozen men wore Egyptian flags wrapped around their shoulders. With cellphone and Internet connections down, activists across the city tried to determine the extent of arrests overnight by security officials.

Organisations that track global internet access detected a collapse in traffic in to and out of Egypt at around 10.30GMT on Thursday night.

The shut down involved the withdrawal of more than 3,500 Border Gateway Protocol (BGP) routes by Egyptian ISPs, according to Renesys, a networking firm. Only one ISP out of 10, Noor Data Networks, appeared largely unaffected. It connects to the outside world via an undersea cable operated by Telecom Italia.

According to BGPMon, another networking firm, 88 per cent of Egyptian internet access was successfully shut down, however.

Renesys speculated that the apparent anomaly of Noor Data Networks may be a result of the fact it provides services to the Egyptian stock exchange.

BGP routes are one of the most vital parts of the internet. They most used by ISPs so their networks can exchange information about how to best route the packets of data that make up all internet communications.

Modern technology and broadband gives power to the little guy.

This is helping the cause of democracy in the Middle East.

We can use the same power in our micro business.

A reader recently wrote:  Good morning, Gary:  If you haven’t already, you need to read “The Long Tail: Why the Future of Business is Selling Less of More” by Chris Anderson. It explains and applies the principle you mentioned in today’s Ecuador report, to internet applications. It is why Wikipedia has more data with better accuracy than the Encyclopedia Britannica.  I thoroughly enjoy your reports and look forward to personally investigating Ecuador and other South American refuges.

I replied:  Thanks.  Yes, I love this book and first wrote about it back in 2007. Take a look in our archives as I wrote back then:

This is the era when small is big. Chris Anderson describes this in his book “The Long Tail: Why the Future of Business is Selling Less of More”.

The last marketing era was dominated by broadcast. This was a distribution system where it was most efficient to send one message to millions of people.

The internet has introduced the era of broadband where it is most efficient to send millions of messages to one person each. This plays exactly into the hands of the small self publishing business because it allows you to earn from many small niche products where no big corporation can afford to compete.

For example at one of my websites alone that focuses on multi currency investing has 21 earning sources.

All of the sources are small, some as little as a few hundred dollars a month. Yet added up so far this year (in the first 10 months) that one website has earned $159,090 from orders that came direct off the internet. That’s better than an extra $15,000 a month of income…enough to buy quite a few groceries despite inflation.

Back in the 2000s, this idea of broadband helped form one of my business goals… to understand the ramifications of the shift from broadcast to broadband.

Through this search we have learned a lot about how to build a micro business.   Our thinking has evolved into a new business model that we call… narrowband.

Narrowband uses SPecific phrases to attract potential customers with SPecific needs and then develops an intimate relation with that customer via SPecific solutions.

Learn more about the rise of the SPecific man… and or woman and SPecific business here.

Whatever this sudden change in the Middle East brings… good and bad… one thing is clear…  technology… the internet… cellphone… social networking and broadband have changed politics forever… and business as well.

Knowing this can help you gain security and extra income with your own micro business that uses the power of the net.

Learn about how to use narrowband in business and investing at our upcoming International Investing and Business Conference February 11, 12, 13 in Mt. Dora, Fl.