There are five ways to profit in growing inflation: real estate… multi currency investments…. commodities… equities and by having your own micro business.

Having your own micro business requires work and overcoming a number of obstacles.

One hurdle many micro businesses face is funding.

Our local bank has billboards everywhere that say… 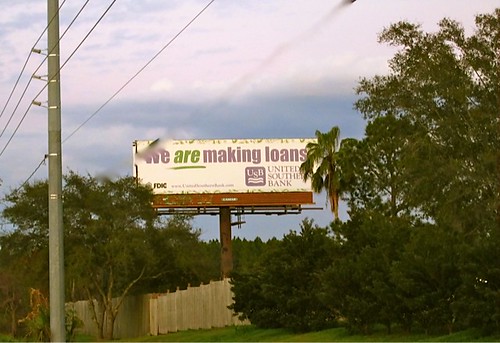 “We Are Making Loans.” 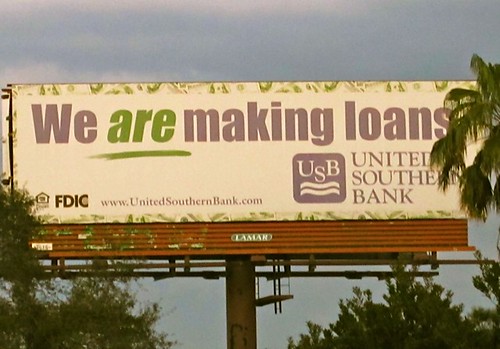 I hope they are. Merri and I don’t borrow money (except to leverage our multi currency portfolios from time to time).

But everywhere I hear my neighbors say.   “Banks are making loans?  yeah… sure…. if you do not really need a loan.   Otherwise…. Fat Chance!”

I am very happy that Merri and I do not use debt and have not for decades.

Yet I know that many readers would like a way of funding to start or grow their micro business.  I know many ways to get small business loans beyond banks. More on this in a moment.

First, let’s look at why banks are not expanding credit when they are flush with cash.


Recently there has been a lot of input about how banks are making so much profit but not lending. What’s up?

I know this phenomenon well.   I wrote and talked about the same thing in the 1980s when the US was coming off a recession and the Fed was increasing liquidity and lowering interest rates then as they have been these last several years.

Back then one of my readers… a real estate developer… went bankrupt when his lender jerked his line of credit. One investor or another claimed fraud and the poor developer ended up in criminal court. His defense lawyer called me as an expert witness.

I remember that Federal prosecutor.  He did not like me at all… especially because I refused the defense attorney’s offer of pay. When he asked why… he suggested that the defense had put me up to this.

“Not true,” I replied. “I actually like to see justice”.  The big banks were making all the bucks and the small developer was going down the drain. Then the sytem was blaming some little guy while the fat cats laughed in their country clubs.

The reason banks are not making loans is simple.  The Fed is supplying the banks with reserves at a near-zero rate.  Not much results in bank lending to business, because the banks can buy Treasury bonds that pay 3% to 4%.  They borrow from the government at zero and invest the loan with the government for 3%. Wow anyone could make money with that sort of deal!

I did not like it then when bankers were using my tax dollars and my bank deposits to enrich themselves while they let the overall economic system down. I do not like it now either.

The formula is simple. The Fed lends money at almost nothing. The banks borrow it. The bank invests it right back at no risk.

Why pass it on when the banks can use the loans instead to pump up their profits…  stock market and make fortunes?

A January 21, 2011 Time Magazine article entitled Big Bad Bankers outlines the problem. Here is an excerpt: Banks are back.  JPMorgan Chase recently announced that it earned $4.8 billion in the fourth quarter of 2010, nearly 50% over the previous year.

Goldman Sachs employees won’t go hungry. The bank’s fourth-quarter earnings may have been hurt by weak trading results, but it is still hugely profitable.

There is nothing inherently wrong with large banks making large profits. Yet the news from Wall Street is attracting the ire of Main Street, which continues to struggle.

While everyone else struggles, banks have been in a privileged position, benefiting from interest rates on short-term interbank loans (the mother’s milk of all banking transactions) of nearly zero and long-term rates above 3% plus fees.  Because a functioning banking system is as essential to modern society as power plants and water, banks have been given every advantage by government. (See the top 10 bankruptcies.)

They have not, however, responded in kind. They have not aggressively lent money. Instead, they have hoarded capital. They have done so to pay for legal fees and for defaults on mortgages and credit cards. Though loans have increased in recent months, it’s after an unprecedented period of contraction. Credit remains tight.

The goal is not to return to the obscenely loose credit standards that fueled the housing bubble, but large banks are now tilting to the other extreme. Part of the problem is that the regulations designed to prevent a repeat of the crisis of 2008 — including demands for much higher capital reserves, instituted as part of the Basel accords last summer — have incentivized banks to reduce risk, increase their reserves and tighten lending standards.  Instead of taking the government bailouts and then bolstering a weak economy by lending to creditworthy individuals and businesses, banks bolstered their own weak balance sheets.

The bottom line is that the financial reforms of the past year need to be revisited. One solution would be to break up large banks into discrete parts, creating a new Wall Street of boutique banks without as many conflicts of interest. If we aren’t prepared to do that (and there’s a good chance we aren’t, given the likely cuts in pay and staff that would impede regulators and other public-sector workers), we need to create incentives and mandates to lend. Period. It would have been easy to make those part of the bailouts of 2008 and 2009; now it will require carrots like allowing banks more latitude in accounting for bad loans. That will be seen as extending another hand to already flush banks. Unfortunately, it may be a price we need to pay.

A Financial Times web article entitled: “The (still weak) US lending recovery” suggests that bank loan tightening may be easing… but not much.

Here is an excerpt from that FT article on micro business bank loans: A graph from Moody’s Analytics, plotting the federal funds rate against the growth in commercial and industrial loans: 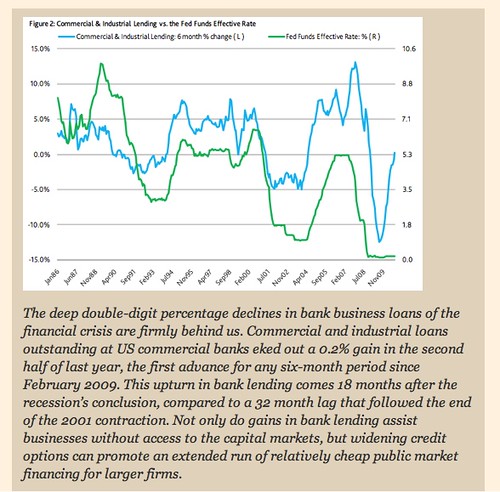 Decent news for the broader economy — though as with employment, new home sales, the small business outlook and a host of other economic indicators that have improved recently, this needs a bit of context.

The Economist Intelligence Unit points out that if you look at the same lending figure year-on-year rather than in six month increments, in December it declined for a twentieth consecutive month. Obviously that doesn’t mean the recent improvement is illusory — the recovery stalled dramatically through the middle of 2010 — only that it is modest, especially given the enormous slack that remains in the economy.

What does one do if they need micro business funding?


Wait for bank lending to grow.  That could take a while… could cause you to miss some good opportunity and even when bank lending eases… there is little chance of small business loans being the first to shake loose.

I have quite a bit of experience in micro business lending.  My second job when I was just 21 years old was selling US mutual funds in Hong Kong abroad starting in 1968.

The 1960s had seen great economic expansion in the US until the stock market collapse of 1968 and the recession in the early 1970s. The chart below from tradingeconomics.com clearly shows this.

This killed the US mutual fund industry in the US and my business along with it. I had to start a new micro business.  I shifted to selling US and Fiji real estate plus raising money for small US businesses.  Plus I found micro business funding for my own business.

Our February Mt. Dora International Business Made EZ course includes a session on how to funding micro businesses.

Read the FT article The (still weak) US Lending Recovery