Spotting investing value trends can help keep us not only rich… but secure. 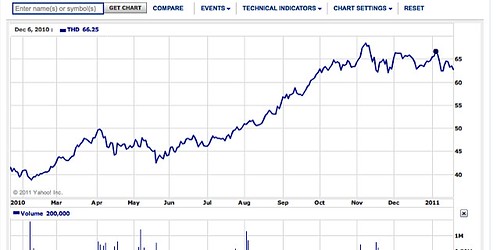 Taiwan.  The finance.yahoo.com chart above is for the ISHARES MSCI TAIWAN ETF.  Both stock markets (Thailand and Taiwan) have been priced  at a good value… but each… as the charts show have risen to all time highs.   See longer term charts below.

Last week’s message looked at how spotting future trends is not enough to assure successful investing. We must adapt to new ideas, information and innovation also.  Yet just seeing the trend is not enough.  Few of us have the input to know how the new trend will become commercialized. How can we tell if PC or Mac will win? How can we know if Google will do better than Yahoo or Ipod outperform other phones in the long run?

Who could tell when the eight track was competing with the Cassette disk?  The battle between Edison (DC current) and George Westinghouse-Tesla (AC current) was fierce and barely won by Westinghouse. In fact the process is said to have ruined Tesla financially.

So trends are not really the best of guides.  Yet value as an indicator of where to go will never let us down.

Take for example why I am not too hot on China.  Jyske Global Asset Management wrote in its latest market update (bolds are mine):

The Chinese  announced several  economical figures for 2010 this week. The Gross Domestic Product (GDP)  came out with 10.3%, a very impressive growth. Retail sales showing an increase of 19.1% and  Consumer Price Index (CPI) at 4.6%.  The figures confirm that China still is one of the main players in getting the global  economy back on track, after the deep recession in 2008.

The Chinese Central Bank has been very active during 2010, increasing official interest rates and reserve requirements for the banks. These steps are done in order to slow the economy and fighting inflation.  The result can be read in the figures, as the inflation are kept on a moderate level, taking the growth and consumption into consideration.

England on the other hand has inflation problems. This week CPI came out at 3.7%, which is much higher than the central bank’s target of 2%. The minutes from Bank of England will be studied carefully in the coming months, looking for signs that England could be the first of the major European economies to increase the interest rates.

Brazil’s central bank raised its benchmark overnight rate by 50 basis point this week.  The inflation picture is of great concern for the central bank. A period with heavy rain and damage to the domestic farm land has contributed to this, as lack of farm products  will increase food prices. The increased interest rates will probably attract more foreign investment to Brazil.

The euro has had a renaissance this week. There have been rumors  that China and other Far Eastern countries have been in the market building up their  euro foreign exchange reserves. These rumors have not been confirmed. The euro has during the week increased  approx. 2% against the US dollar.

The European debt crisis is for a while out of focus, but we expect the focus will re-emerge and continued high volatility in the EUR/USD  cross rate  in the coming months. (End of  Jyske comments.)

I am not overly excited about this Chinese growth because of the Chinese stock market value. Here are comments from Keppler in his last value update.

According to Keppler’s performance ratings, a combination of these markets offers the highest  expectation of risk-adjusted returns.

If you are a new subscriber, learn more about Keppler Asset management here.

In my opinion, if one wants Asian action, it makes the greatest sense to look to Taiwan and Thailand.

This has certainly been a great play in Thailand since 2009.  Taiwan as…

well has been extremely strong.

Based on this premise, when I sold bonds last year I did not go into Thailand and Taiwan. Just because a market or a share is at an all time high, does not mean it is a bad value.  Yet buying at a new top always bothers me personally… so I hesitate. Glad I did in this case.
We can see this push to get into Asia and especially China by looking at both the State Street Global Emerging Markets Fund and Jyske Invest Emerging Markets Fund.  Each follows a value approach to investing. The State Street Fund even has its largest country holding in China… though Keppler is its adviser.

Here is the State Street Fund Country Distribution.  Note that the largest country % is in China. 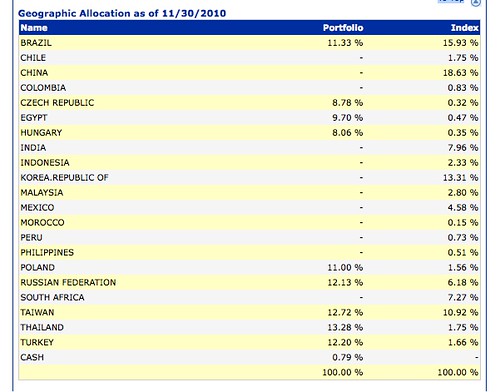 However, note that none of the largest investments in the fund are in China.

The Jyske Invest Emerging Markets Fund has a… 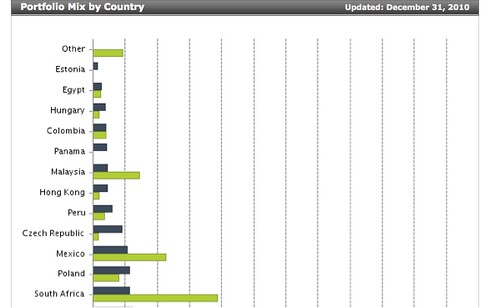 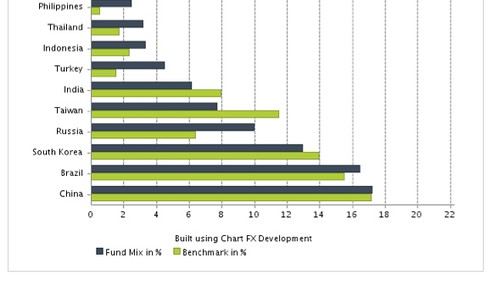 country diversification that is heavily in China as well. 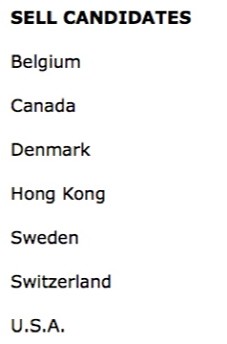 ranked as one of Keppler’s poor value (sell) markets.

When we invest in value… we need to be thinking long term.  Value investments tend to under perform during the later part of bull markets, do worse in bear markets and then recover suddenly in spurts at the beginning of bull cycles.   This is why I look for good value markets that have been in decline rather than those in a recovery mode.

Value should always be sought in all investments. During these times of change and likely inflation, there are five good places to invest… equities, multi currency investments, commodities, real estate and your own micro business.

We’ll look at top value markets and all five ways of investing now at our February 11-12 International Investing course in Mt. Dora, Florida. Thomas Fischer from Denmark will also be there speaking and answering questions.   Hope to see you there!