You can see the whole message “Spot Future Trends” in the archives.

Aghhhh!  Please forgive my delayed replies this last week. My MacBookPro crashed just one day before we started our most recent Super Thinking + Spanish course. I had complete backup… but no computer to put it on.  This left me without a Powerpoint presentation and all thumbs trying to keep up with the steady onslaught of incoming email via GMail and stolen moments on Merri’s PC.  Aghhhh! 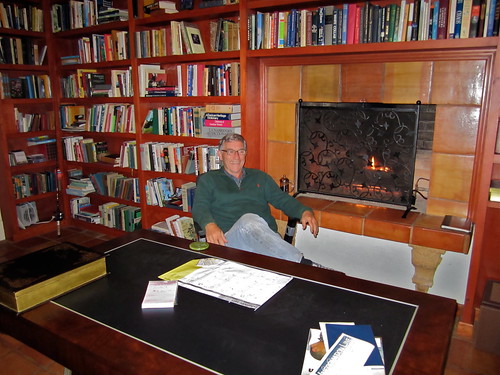 I may look relaxed in my office but I can tell you I WAS NOT.

All this led me to spending some time at the Altamonte Springs Apple Store.  What an interesting place for investors to view.  So many ideas. So beyond…. computer.

Now I have two MacBookPros.  I’ll keep them synchronized so this never happens again.  The new computer… and Moore’s Law and watching all these so young, Apple geniuses really started me thinking about future investment trends.    My new Mac has 8 gigs of processing power… 500 gigs of memory and a high speed hard disk that chews up the graphics files I move around like the wind moves dust… all including three year service a one on one program high res, no glare screen… and a remote… $3,500.    I look back at my first fridge sized Data General Eclipse 32 bit machine.  I recall paying about $75,000 in the 1980s.  What a difference 25 or so years have made.

We can learn a lot  (not everything, but quite a bit) about investing in the future by looking in the past… so I often check back to see what I wrote and how the ideas turned out.  Talk about 3H… “Humbling”…. “Humorous” and “Honesty Evoking”.

The excerpts here are from a message posted at www.garyascott.com June 10, 2000, almost 11 years ago: I recently spoke at Jyske Bank’s international investment seminar which Merri and I always enjoy. We began at their Copenhagen headquarters in a grand old building in the center of town where they always speak a little and feed us a lot in their company dining room. Also, I am always impressed that the bankers themselves wait on tables and serve us. The building’s history gives us a bit of architectural awe and since Jyske are not normal bankers they really do work hard to entertain. 70 delegates came from all over the world, five Australians, a handful of Ecuadorians, Swiss, Germans, Danes and Swedes, two Taiwanese, Canadians, French, Austrians, one man from the Ukraine and one from Ghana, plus some more and we had a genuinely fun time as well as learned a lot.

The bank lined up a host of really good speakers including Ian Pierson, the head futurist for British Telecom spoke. He is really a bright guy!  If he is to be believed, we won’t pay for telephone calls in a decade and we’ll have computers that can almost create Star Trek style holodecks. We’ll have computerized skin of chips so small they’ll sink below the skin and connect with neural networks. We can put these on so we’ll feel and taste as well as see and hear digital experiences.

The idea is that TV and phone will drag the world into cyberspace! We will use increasingly powerful, smaller (and smarter) chips in phones and TVs. We will make them interactive with voice and gesture and the computers will even give vocal replies.

Their will be two steps that take place.   First we will move from using computers to using interactive TV and the phone. Too many people are afraid of computers because they are too user unfriendly. But everyone knows how to use the TV and phone.

Second we will shift from the typed word to voice. Not everyone can type but most of us can talk.

These voice and gesture activated devices will be powerful in assessing your needs, sorting out data available and giving you a short list of useable information. You will no longer go to the net and ask a general question which may result in thousands of possible answers. You’ll be able to ask specific, personal questions and get personal, specific answers.

This simple idea could change our entire social, economical, religious, political and economic structure. How?

One change will be the functional decomposition of companies. Many of the aspects of business that currently make companies a powerful social tool, such as human resources, information sharing, clerical, accounting, distribution, procurement, legal, sales, even R&D will be capable of being automated. Companies will simply not be needed. Computers will give the services to workers that companies previously provided.

Another change will be speed of change. In this scenario change becomes so rapid that experience becomes a liability instead of an asset! Businesses are a pool of experience commonly guided by a plan. As computers eliminate the current dynamics of time and space the inflexibility of plans will reduce the effectiveness of companies. Instead we will see highly flexible, loose knit, networks, linked by the net, that take on short term tasks.

This organizational shift will alter the dynamics of everything. Imagine the shift in political power for example. Imagine how a network of a thousand people can gain instantaneous and strong power. If each member in such a network can pass an idea to only ten people, three deep that small network can move a million people (buyers, votes, etc.) overnight. Small networks will be able to apply considerable pressure in very direct places at incredibly specific times, all at low cost.

We can presume from this that those who are wealthiest spend the most of their time on a speciality which makes money for them.

But the vocal use of interactive, intelligent cell phones and TVs means that individuals will return to having more general knowledge. Specialists will not be so much in demand because up to date, relevant, less biased, specialized knowledge requirements will be filled on demand by computers.

So look for the cuddly home interface. This could be where the next big action is.

So, her I am Jan. 21, 2011 and I am thinking…..well, Pierson and that message really banged that nail on the head.  But how have the share prices of the cuddly interface companies played out?

Let’s take a look and see how the share price of some businesses that should have profited from these trends have played out.

How about British Telcom?  I mean they hired the guy… Pierson.  Here is the share price since the year 2000.

So the telephone company employing Pierson didn’t do all that well in this decade of the cuddle interface.

How about Vonage the company that let’s us talk on the phone free? 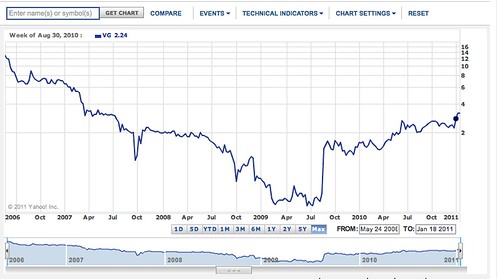 Noika… the Finnish cell phone maker.  Are they in the race?

Evidently investors in 2000 thought Noika was the company that would excel.  They may still be thinking that and waiting. If so… I hope they had other investments as well.

Apple?  The company that started me thinking about this.  I am sure the IPod… the King of the phone cuddly interface played a big part in its recently rocketing share price, so this is the one share of a company heavily involved in the cuddly interface that has really moved up.

Why has Apple share prices shined and not the others?

One reason behond Apples success may be its lack of debt.

Here is an excerpt from that “No Debt” message: 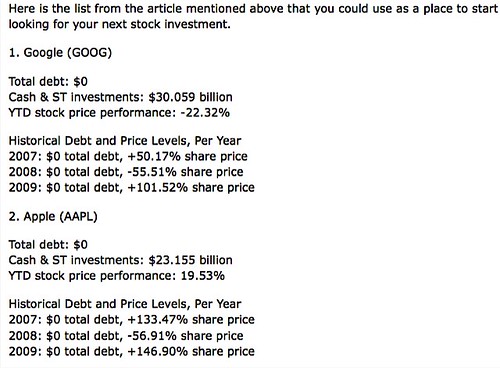 Apple has great design and a very innovative leader. Even now, as well established and successful as Apple is, Steven Jobs’ medical leave brings the company’s future into question.

Big companies like British Telcom are hard to adapt quickly.  Vonage does not have such a cuddly interface yet.  Noika, I am not sure what went wrong.

The clear message though is “just catching the next big wave is not enough!”  Every new technology offers great opportunity but venture investments do not have an obvious value profile so speculation and hence extreme discipline and diversification are required.

The key to prosperity rests in the ability to adapt to accelerating change.   This requires a new form of investment thought.

Our upcoming International Investing Made EZ and our International Business Made EZ seminars include sessions on how to use FM Thinking (Frequency Modulation) to improve investing and business choices.

We dipped into the archives, saw the comparisions and can see that to adapt to think Beyond Logic.  Our FM course is designed to help you to see bigger pictures….