I recently paid off the US dollar loan in my portfolio due to layered debt concern.

This new year could see the end of the euro…  or a euro crisis is the least we should expect.  If so… investments in euro made with borrowed US dollars could suffer a serious loss.

I do not have many investments in the euro.  I invested my borrowed dollars in Australian, New Zealand dollars and Mexican pesos.  Still I cleared the loan as I do not want borrowed dollars and a portfolio leveraged with them during extreme volatility.  The tendency of the market in troubled times is to rush to US dollars… even though this makes no fundamental sense.

The end of my leverage  reduces my potential for profit but also reduces my risk of loss.

I sold Australian dollars and  pesos and paid off my US dollar loan.

We can see a wave of investments in Swiss francs and gold which suggests that markets are nervous about currencies.  This makes sense.  Investors have every reason to be nervous.  Two major currency catastrophes are imaginable in 2011.  One already mentioned above is the disintegration of the euro due to the inability of the some of EC members to pay their debts.   The unimaginable destruction of the euro is now imaginable.

The second concern is for the US dollar.  US dollar fundamentals are extremely weak.  Long term, I believe the US dollar will fall.   Against what will it fall is the question.

Everyone knows that US Federal debt is untenable.  Now the overhanging risk from multi layered American debt is becoming public knowledge.   Budgets are strained at every level…. federal, state, city and county.

This photo from the TV show ” 60 minutes” says it all. 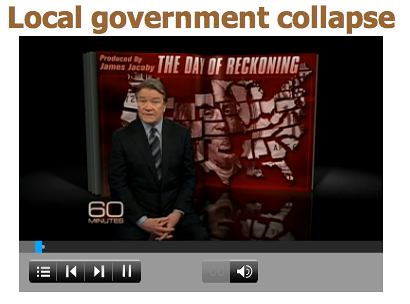 Photo from Cnet.com of  a “60 Minutes” show about state and municipal debt.

Our December 15, 2010 message looked at the problem of debt levels of many US States.  This problem filters down into cities and counties as well.  Default at these levels could strain the US dollar a lot.  There is a link to this “60 Minutes” show that looks into this problem below.

Don’t miss it if you have not seen it.

Jyske Global Asset Managers feel as I do. Jyske sent these comments in their recent market update (bolds are mine):  We enter 2011 with a moderate underweight position on bonds and a corresponding moderate overweight  position on equities and/or commodities. Based on our expectations for 2011, we are likely to take on more equity and commodity exposure at the expense of bonds.

We also enter the new year with an underweight position on the U.S. dollar and dollar denominated securities.

However, we feel it is uncertain how the euro-dollar exchange rate will behave in 2011 and therefore, we are
likely to move into a more neutral dollar position if or when this opportunity arise.

The general economic outlook is a divided world, with slow growing economies in the U.S. and Europe and fast
growing economies in emerging markets. These regions are in need of a different policy mix, but cannot be
separated due to integrated financial markets. Hence, excess liquidity will continue to flow from low yields in
the U.S. and Europe into emerging markets, causing currencies to appreciate and stock prices to increase in the
latter economies. Also commodities are expected to attract investors. The risk is that bubbles will build during
2011 and we could be hit by corrections.

Finally, 2011 will probably be the year that the fate of the euro is determined. Even though the political will is in
place to protect the euro, market forces could build to a level that is not possible for eurozone governments and
the European Central Bank (ECB) to restrain.

Also, within the eurozone tensions continue and the reason is the same; one common currency and economies
in need of different policies is a bad and dangerous combination. There are no quick fixes to the challenges facing
the euro and therefore, we foresee 2011 to be a problematic and stressful year for the European currency.

In the U.S. and in Europe monetary policy will need to stay on the “loose side”, supporting growth. However,
there are restrictions or limits to this policy, especially in Europe.

In Europe, the ECB is very much under the influence of Germany and for historical reasons this nation fears
inflation. Therefore, ECB has only one goal, to keep inflation under control and hence, ECB is reluctant to engage
in Quantitative Easing (QE), printing money and buying bonds.

This is in contrast to the philosophy of the Federal Reserve Bank (Fed) in the U.S. The Fed has two targets;
inflation and unemployment and at present it is the high level of unemployment that worries the Fed the most.

Therefore, in 2011 we expect the Fed to continue to be relatively more “loose” on their monetary policy
compared to Europe and this will continue until growth in the U.S. outpace Europe.

Contrary to the U.S. and Europe, emerging markets are generally in the process of tightening their monetary
policy, raising interest rates and absorbing liquidity. This is bound to create tensions on financial markets as
capital will continue to flow from low yielding securities in the developed countries, to increasing and already
higher yields in emerging markets. Again, expect currency markets to be the place where tensions will break
loose.

On fiscal policy there is also a divergence between the U.S. and Europe. In the U.S., the government has been
forced to prolong tax cuts, thereby continuing a fiscal policy that is stimulating economic growth. In Europe the
situation is the opposite. High levels of government debt combined with low growth and one common currency
has caused a crisis, and since devaluation of national currencies is not an option the only way out is a long
period of tough fiscal thrift. Policymakers in the eurozone are handcuffed unless they let go of the euro.

A policy mix of loose monetary and fiscal policy in the U.S. will generally have a tendency to steepen the US yield
curve. Loose monetary policy will keep the short-term interest rate down, whereas the supply of government
bonds to finance the budget deficit will put an upward pressure on the long-term bond yield. Further,
expectations of an end to Fed’s massive QE will also drive up expectations on future short-term interest rates
and hence, steepen the yield curve. We expect QE to come to an end in 2011.

(QE is Quantitative Easing by the Federal Reserve creating money to buy long-term U.S. Treasury bonds. Buying these bonds pushes down their yields so interest rates in the US dollar will remain low to stimulate the economy.)

In Europe, where we can expect a moderately loose monetary policy combined with a tight fiscal policy, the yield
curve shall not need to steepen.

In emerging markets, where we expect to see increasing inflation pressure, both interest rates and bond yields
will most likely increase during 2011 creating a “magnet” on all the spare liquidity that the Fed and – to a less
extend – the ECB is pumping out into the global economy.

As already mentioned, currency markets will be much influenced by different growth paths between the U.S.,
Europe and emerging markets. Further, differences in the policy mix between the three regions will only magnify
tensions.

In general, we expect to see an appreciation of emerging market currencies vis-à-vis both the U.S. dollar and the
euro, as investors will move investments away from low yield regions into high and rising yields in emerging
markets.

Between the dollar and the euro the picture is less clear. On the dollar side, a weak economy and a low interest
rate is negative on the dollar. However, in Europe the same arguments are negative on the euro. Therefore, if
U.S. growth moves ahead of growth in Europe and the U.S. yield curve steepens relatively to Europe, this could
cause investors to move from euro to U.S. dollar, especially if the eurozone sovereign debt crisis continue to be
an issue.

The positive growth picture especially in emerging markets, is generally good news for commodity markets.
Most commodity prices have already increased but we expect to see the upward-trend continue both on metals,
soft commodities and possibly also oil and other energy sources. The growth in emerging markets is the key
driver. However, the risk is that a bubble is building and a correction could happen sometime during 2011.

Like commodities, we expect that 2011 will be a bullish year for equities, at least compared to bonds. In general,
equities are trading below or at average historical price-earnings levels and compared to the low bond yield,
earnings yield predicts a better return.

Higher return normally go hand in hand with higher risk. This is also the case at the entry of 2011. One risk is
that emerging markets overheats, triggering a policy response that causes a correction in stock markets. There
is already a growing fear in the market that bubbles are building in emerging markets.

Another risk could be that we see a setback in growth in the U.S. and/or Europe causing a correction in forecasts
on company earnings. Especially, this scenario is a non-trivial possibility in Europe where debt burdens have
handcuffed governments and the ECB, forcing them to pursue (too) tight fiscal and monetary policies.

Further, we enter 2011 with an underweight position in U.S. dollars and dollar denominated securities. This is a
bold position as it is uncertain what way the dollar is going to move versus the euro. At present the euro is
oppressed by the debt crisis in the peripheral eurozone. However, the political will in Europe to save the euro is
strong and hence, we expect policymakers to go as far as it takes to avoid a failure of the common European
currency. But of course, market forces can become too strong for governments and central banks to stand a
chance of successfully fighting back. Remember how George Soros and others speculated against the British
pound back in 1992 and won.

Like Jyske we feel that bonds are less likely to preserve wealth at this time.

Like Jyske we are concerned about the potential for a stronger dollar… hence our removal of our dollar loan.

Like a broken record, this site reminds readers that the the five ways we are turning these global economic distortions into opportunity are in:

#5: Our own Micro Business.

See how to stay updated on your international investing throughout 2011 at our February International Investing seminar February 11 and 12, 2011 in Mt. Dora.  Click on http://www.garyascott.com/catalog/international-investments-and-international-business-course 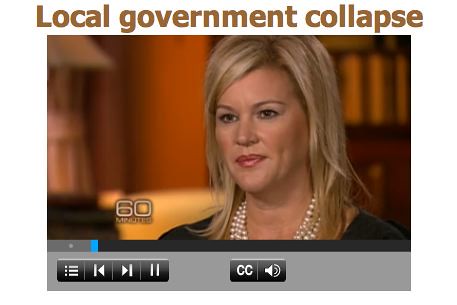 ← Rise of the SP Man... or Woman Scrubbing Business & Investments →