There is terror in investing markets because of currencies. 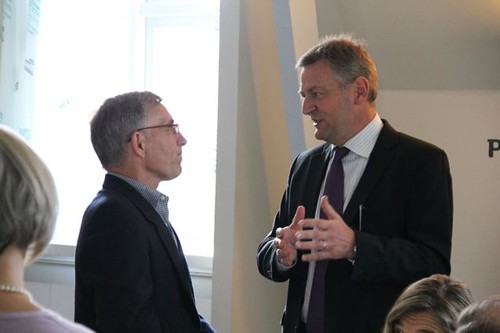 Gary Scott speaking about currencies with Jens Lauritzen djrector of Jyske Private Bank.  Jyske is among the leading currency traders in the world.

World stock markets continue to slide as this chart of the Morgan Stanley Capital Index  at Bloomberg.com for November shows.

Yet November is generally a month when stock market are strong. One part of the market terror driving markets down is to create by fear the fate of the US dollar.

When I first started investing in and writing about multi currency investing in the 1970s… the formula for making forex profits was simple…  invest in the currencies where the governments were employing economic sanity… such as Germany and Japan.  Bets against the US dollar almost always worked because the US government continued to spend more than it earned.

Then these other countries caught on to America’s bad habits.   Germany went into debt bailing out East Germany. Then the Germans partnered up with other insane spenders (Italy, Greece, Spain, Ireland) gave up the Dmark and joined in the euro.

Japan had a bubble burst that was as bad or worse as the 2008 US shakedown… but fifteen years earlier.  The Japanese government became one of the biggest spenders of all.

Plus Germany and and Japan have rapidly aging populations.

Japan has also fallen behind as a global competitor in many other ways.  Beyond its demographic troubles, Japan’s productivity per worker is terrible, and there is not enough opportunity for  women and older people. Immigration is almost non existent so there are no new ideas and energy to help stimulate a vibrant society.

On top of these problems, the US dollar is rapidly losing its role as the reserve currency of the world… which without an alternative leaves everyone worried… concerned… in a state of fear of the unknown.

The only way to protect against this fear is to invest in a spread of currencies and take advantage of currency contrasts and trends.

This leads us to the stage where understanding global currency markets is so complex that unless it is one’s daily business the only way to overcome the complexity is with the most simple, basic equations.

This is how Jyske Global Asset Management trades currencies. Though Jyske is among the most active currency traders in the world, JGAM takes fundamental positions based on basic formulas.

Here are JGAM’s November 2010 positions in currencies. (They may change positions during a month but in November made no changes.)

JGAM says: The Asian economies are struggling with increased inflation pressures and will have to accept appreciating currencies to fight inflation. Singapore is already at the top of the comfort zone identified by the monetary Authority of Singapore (MAS) and this should thus indicate that an appreciating currency is acceptable. We therefore keep our current  Singapore dollar (SGD) position and keep the existing stop loss at 1.3415.
Position taken: Sold USD and bought SGD at 1.2889

JGAM says: The Federal Reserve (Fed) last week moved to implement QE2 as expected. The Fed will buy US Treasuries to the tune of USD 600 billion over the next 9 months. The initial market reaction was a significant US dollar (USD) weakness and the EUR/USD moved to 1.4285. More Quantitative Easing means that US short term interest rates will remain near zero for an extended period and should suggest that the USD remains weak. However, renewed fear about the Irish economy and its banking sector spooked the markets this week and has weakened the euro (EUR) to currently 1.3700.
Position taken: Bought EUR and sold USD at 1.4009

JGAM says: The Mexican peso (MXN) should still benefit from increased risk appetite and the search for yield in a low yielding environment. We thus keep our long MXN and our defined stop loss at 13.60. Position taken: Sold USD and bought MXN at 12.6423

JGAM says: The British pound (GBP) is testing the important 1.6000 chart point and if broken could move to the August 2009 high at 1.7000. UK GDP growth was surprisingly strong at 2.8% year over year in the Q3 and with inflationary pressures high this should keep Bank of England (BoE) on the sidelines with further Quantitative Easing. Position taken: Bought GBP and sold USD at 1.5921

US investors can invest directly in the JGAM fund that holds these positions ($100,000 minimum).

Details are available from Thomas Fischer at fischer@jgam.com

Canadian and other non US investors can learn how to invest in forex and currency positions from Rene Mathys at mathys@jbpb.dk