This series has looked at why a huge new economic era will benefit US and Ecuador real estate.  We have also looked at a different Ecuador property for sale each step of the way.

See a link to see this message’s Cotacachi Ecuador property below.

First, this last report on “Trading Down” asks “What do the following have in common with big business and trading down?”

Ecuador and US real estate… 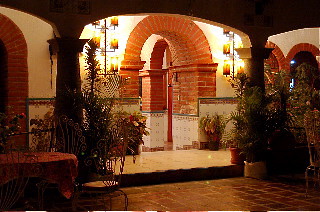 Why would Merri and I buy a beat up 180 year old inn in Ecuador? 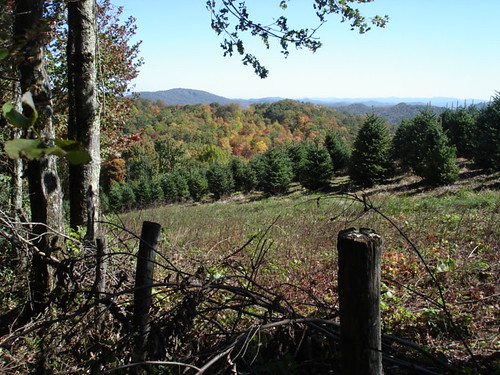 Ashe County is one of the top Christmas producers in the US. Here is a Christmas Tree farm next to our farm. 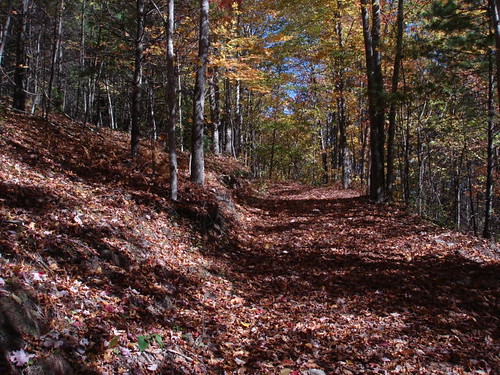 We have put in miles of road on our farm. 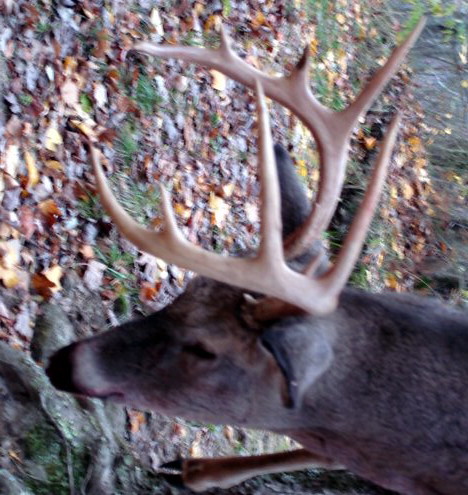 Here is a nice buck I snapped sneaking though our woods. 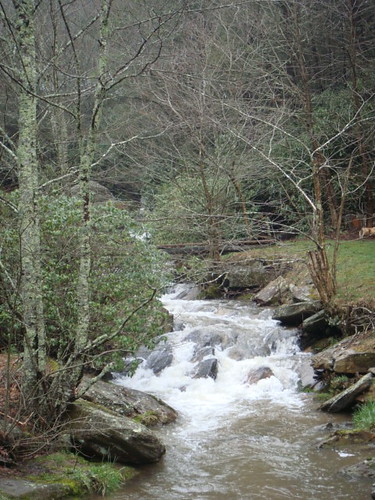 We have a lot of water on our land… all running down the mountain.

What do these all have in common with trading down?   What is their connection?  They are all connected because they all follow the same universal rule that follows the path of least resistance.

Christmas trees farms are everywhere in Ashe County.  Here they are being grown within the city limits of West Jefferson.  Because Christmas trees are cut and wrapped in late October, early November many Mexicans arrive in the mountains this time of year. We are seeing them everywhere.

They are following the path of least resistance to earn income and the flow north where there is work.

We have put in over eight miles of roads on our farm shown in blue. 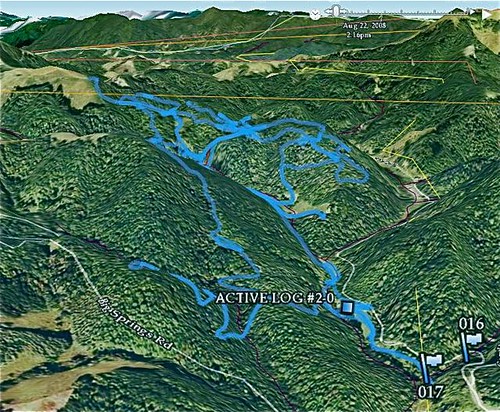 Usually the first question people ask when visiting our farm is; “This is so remote how did you find this place”?   The second question is “How did you figure out where to put the roads?”

My answer to the road question is simple.  “I did not need a surveyor or engineer.  We have a lot of deer on the farm. I simply followed the deer trails.” 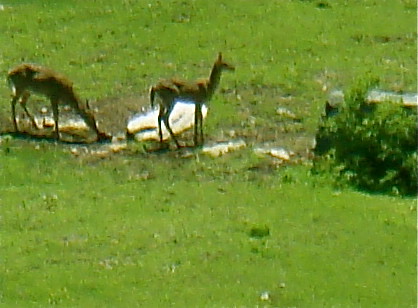 Here’s two does I photoed feeding in our front yard.

The deer follow the path of least resistance so their trails produce roads that run as level as you can get.

The entire farm is a reflection of this universal rule… not a farm in the Blue Ridge sense, but a… 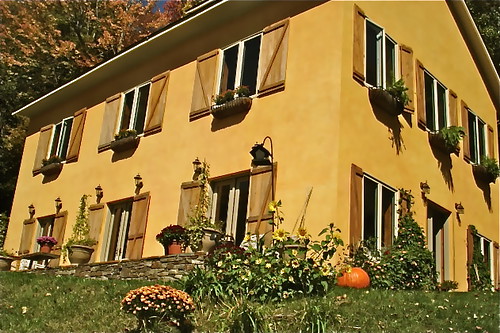 global headquarters with a… 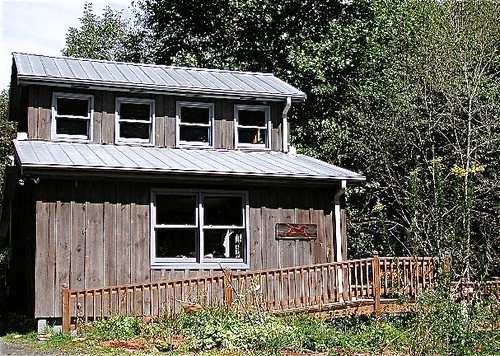 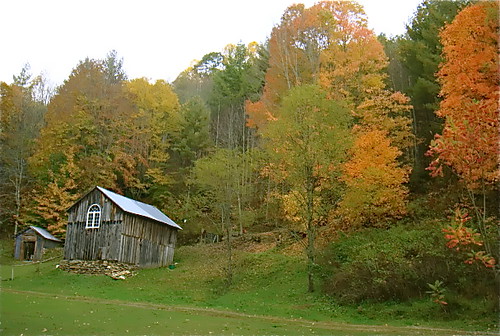 barns converted to apartments and… 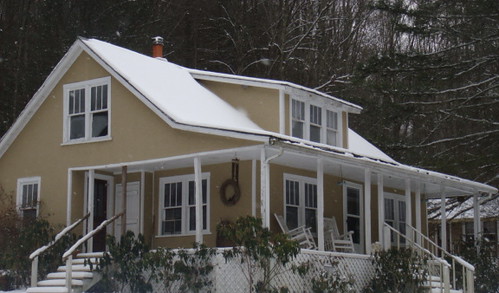 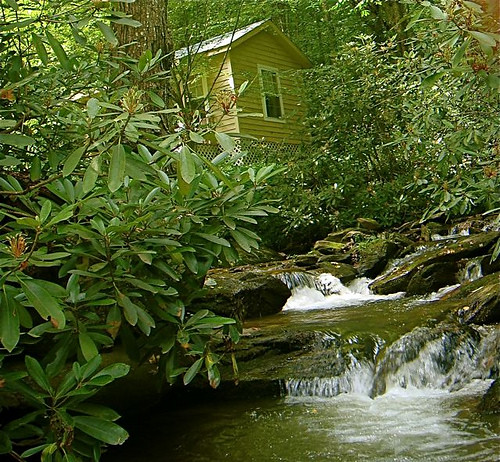 nestled on the creek and… 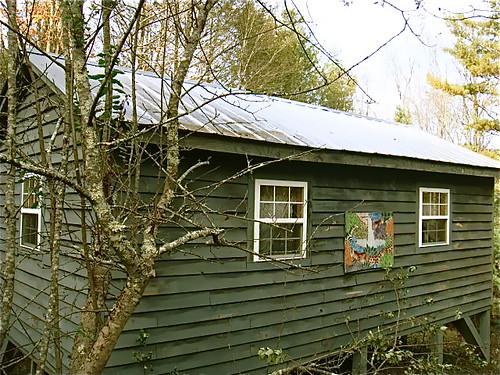 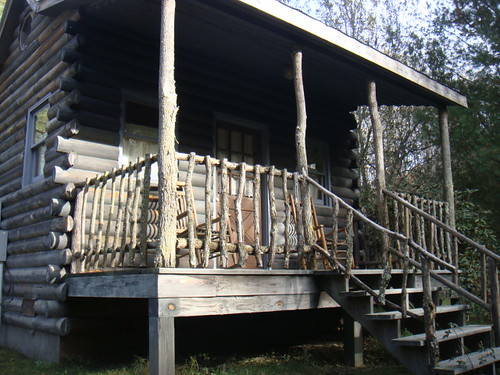 remote parts of the woods, with… 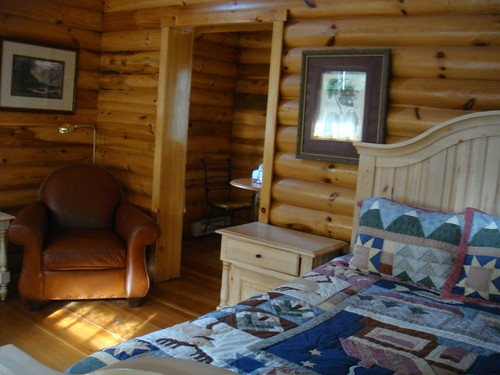 cozy accommodations so guests from around the world can… 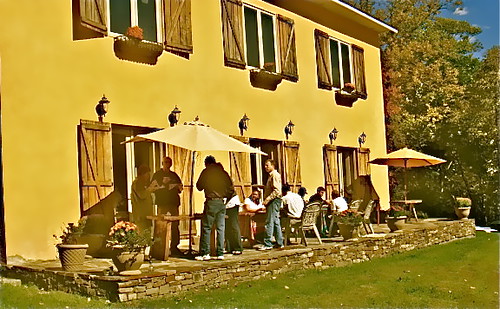 meet to share global ideas about health and wealth… investing and business.

Those who grew up here are selling their farms so they can move into the city and those like Merri and me from the city are moving to the farms… as technology… cars… trains…. planes… the internet and low cost communications change their utility. 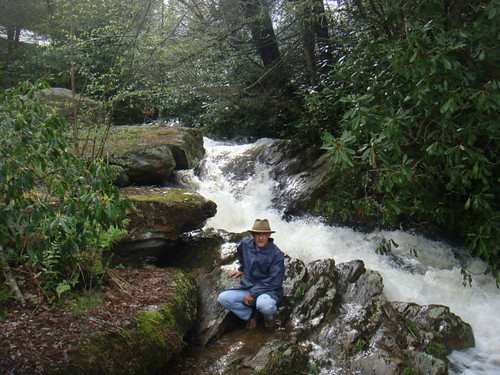 This brings us to the US.   The price of American real estate… compared to European and Japanese has dropped enormously in the last several years.  Even more than it seems when the devaluation of the US dollar is factored in.

Energy of industrialization has been run on  human fuel, farmers moving from rural to urban and suburban environments.  From the farm to the factory as they dramatically improve productivity at a very low cost.  Their enhanced wages increase their consumption.   In short the burst of increased affluence over the past several centuries has been fueled by cheap labor enhanced mainly by fossil fuels.

In this era past big business followed the path of least resistance wherever labor was cheapest in the world.

Globalization and improved technology plus a serious 2008 recession reduced the costs of US labor and enhanced the likelihood that the eleven American benefits we have reviewed in this seven part series will again help the USA be an important leader of mankind into the next socio-economic era.

What About Ecuador and Trading Down?

Ecuador gains from this trading down process in several ways.   First Ecuador real estate and labor were really inexpensive to begin.   Since Ecuador uses the US dollar as its currency, it benefits from the greenback’s fall as Ecuador real estate, labor and debt become less expensive.

In this process of trading down, technology creates a circular flow… just like the flow of farmers to the city and urban dwellers to the farm.  Immigrants move to America as Americans (who no longer have to labor) move out of the US to a less expensive and less cumbersome lifestyle.

The two big losers in the current soci0-economic pact are lenders to the USA and those on fixed incomes.

The collapse of the US economy made real estate in America more affordable… but reduced income, jobs and wealth also.  This has forced the US government to stimulate the economy at the expense of the US dollar.  This will cause inflation.

This is forcing many middle class Americans to move to less expensive areas in the US and abroad.

60 million baby boomers have begun to retire.  Many of their pensions and social security will be severely squeezed by inflation, leaving these people with one of five options.

#1: Keep working
#2: Move to less expensive areas within the US
#3: Export their retirement
#4: Live in near poverty
#5: Die

This is one reason I  believe in Ecuador.  Imagine this. 60 million boomers will retire over the next 20 years. We boomers are the most spoiled group of consumers as a demographic class that has ever existed on earth. We were promised the world. We were given the world. Now the magic is about to disappear.

Assume that 10% of these boomers will decide to move to less expensive countries. That’s 6 million people. Where is the most likely place to go? Eastern Europe offers great potential but is a long distance from the US.

Estimating the Number of Americans Who Move Abroad.

My estimates at 105 may also be low. An article in Barrons entitled, “A new life in Panama” by Bob  Adams tells of  a silent immigration of Americans retirees and more, seeking to  work and live in other nations.

I have been writing and speaking and urging people to consider an international life for not quite 40 years. Yet the scale of the  immigration that is taking place now surprises even me.  The author of this article did a survey with over 115,000 respondents.

More surprisingly the largest group which is making these plans are in households aged 25 to 34.

If this survey is anywhere near correct (I will assume that Barron’s vetted this at least a bit), then the wave of Americans headed abroad is larger than I believed.

So where will these Americans (Canadians, British, Australians, Kiwis and Continentals who are leaving their homelands as well) go?

Canada is out…too expensive and too cold. Most people will head south.

Mexico stands to be #1. Prices there have risen and there is a lot of anti-gringo sentiment.  After all there have been numerous Mexican-American wars. The building of a fence across the border will not help either.

The law and order crisis in Mexico has also grown. Yet it’s still probably the number one benefactor of this flow due to location.

Cuba, when it opens, will be ripe and good as well. A great place to buy when you can assume no negative political circumstances. The low end Caribbean is also good except for those darn hurricanes that will put lots of people off…plus many water and transportation problems and the fact that few of the islands have a real infrastructure.

Panama is good. There is a lot  of English spoken, many yanks already there, but weather is lousy if you want to be in town (hot and humid) and prices are no longer low.

We see many Americans now moving from Panama to Ecuador.

Ditto for Costa Rica.  The rest of Central America lacks infrastructure though there are some nice gringo settlements although they are expensive.

Colombia and Venezuela are the first nations with the potential for full fledged economies  and infrastructures after Panama and Mexico. They can be wonderful places but security and political risks stop most from going there for now.  If the security/drug/crime issues are resolved and image cleans up…go buy in Colombia.  If the political system shifts in Venezuela this could be a great opportunity.

Argentina & Uruguay? Both Buenos Aries and Montevideo should do well also.  They are further from North America but both have very European flavors.

Ecuador, 3 hours and 45 minutes from the US will benefit as the first nation with a full infrastructure and really low cost of living.

If Ecuador gets just 10% of six million Americans who leave the US, imagine what this means to this nation of 11 million.  This is more than a 5% increase in population. However look at what it means in dollars!

Imagine what happens if the 600,000 gringos have an average income of $18,000 a year per person. That adds $10,800,000,000. This is an annual income that almost equals 20% of the entire national GDP! This is one reason why Merri and I include Latin equities in our investment portfolio and are buying more and more real estate in Ecuador.

Every cloud has a silver lining and two clouds casting shade on the greenback’s value are liberal money supply and political interference to support presidential elections. The silver lining comes in the form of profits made in places where fed up Americans and Canadians decide to go when they leave home.

This is why we have purchased a hotel, an office building, 13 condos and houses, and a 900+ acre hacienda in Ecuador over the last 10 years.

What if the 11 benefits are not enough?

This report is about global diversification with the US and Ecuador as parts of an overall plan.

I believe the US debt is high and will cause the US dollar to fall, so this report is about being short American currency because the advancements in the US will be due in part to a declining greenback.

That is why since the release of my first book “Passport to International Profit” in the 1970s I have preached and practiced being a One Man Multinational.

The core message in “Passport to International Profit” was to become a one man multinational where you live in one country bank in another country and earn in another  a six point command posture which is to:

Let’s take this one step further. To have a fulfilling lifestyle make your residence in a place you love and want to be. Do not limit yourself to where you are or where you were born.

More than 40 years after we left the USA,  Merri and I still believe that being global is vital from an investing point of view and enlivening for one’s lifestyle.

This does not mean that the US should be excluded as a place to live or invest.

The 11 American benefits reviewed in this series suggests that the USA may remain a leader in the upcoming socio-economic evolution of “Trading Down”.

That is why Merri and I have increased the weighting of our portfolio in the USA.

That is also one reason why Merri and I love Ecuador as a place to own real estate and live.