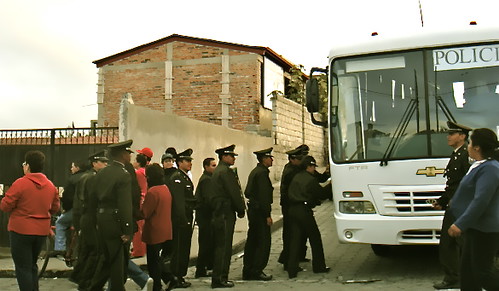 Ecuador’s police and part of the military are on strike. The Ecuadorian President is speaking to the nation as I write… so let’s take a moment to understand the problem and project what might happen.

Ecuador’s president is between a rock and a hard spot as he has been trying to enhance Ecuador’s infrastructure and help the poor all at the same time.

Unlike the US and some other governments, Ecuador does not have unlimited credit. This creates a problem as explained in a recent article at Bloomberg.com entitled “Ecuador will probably tap China pensions to finance deficit Fitch says”  The article says:

Ecuador will probably tap the nation’s pension fund and seek a loan from China to help finance its $2.7 billion budget deficit, according to Erich Arispe, an analyst at Fitch Ratings.

South America’s seventh-biggest economy may need as much as 4.3 percent of gross domestic product to fund the “relatively large” deficit, Arispe, a New York-based analyst at Fitch, said yesterday in a telephone interview.

Ecuador is using debt to increase spending on infrastructure projects and social programs in a bid to lower unemployment and boost economic growth, President Rafael Correa said in a June 5 statement. The nation’s default on $3.2 billion in bonds since 2008, declining oil production and a slump in private investment has crimped funding sources, Arispe said.

Correa “has to find a way to finance his ambitious investment projects,” Arispe said. “Given the limited potential of increased oil-derived revenue” and declining investment, “increasing debt is the option they have at this point.”

The extra yield investors demand to hold Ecuadorean dollar bonds instead of U.S. Treasuries narrowed 6 basis points, or 0.06 percentage point, to 10.36 percent at 9:09 a.m. New York time, according to JPMorgan Chase & Co.’s EMBI+ index. Ecuador’s spread has widened 23 basis points in the third quarter, compared with a 58 basis-point drop for the index.

Ecuadorean sovereign debt is the second-riskiest after Venezuela’s among 15 emerging markets tracked by JPMorgan, according to the bank’s EMBI+ indexes.

The government next year will also begin offering treasury notes with a term of less than one year to boost liquidity, Rivera said Sept. 24. Ecuador has proposed legal changes to allow the country’s banks to use short-term government bonds for as much as 75 percent of their reserves and let the government boost public debt to 50 percent of GDP from the current limit of 40 percent, Rivera said.

The article was correct in a number of respects… the first being that the government is trying to finance part of its debt with Ecuador pension funds.

Yesterday the government altered retirement and military regulations and at least three changes have led to a strike.

Change #1:  All government workers must retire at 65. In Europe people are striking because they want to retire early. In Ecuador people wish to continue to work.  However it is the second change that really creates the rub.

Change #2: Retirement pension buyouts will be paid one half in money and one half in government bonds. In other words, if no one else will buy Ecuador bonds let’s force them on retired government workers.  Americans should remember this ploy.  The US government has floated similar trial balloons about protecting pensions from stock market fluctuations with government bonds.

As I wrote these details, President Correa was speaking to the public and one of our A TeamEcuador just sent me this note:

Gary President Correa told the people he doesn’t care.  He said he won’t back down on his decision and he said if  the policeman desire,  they can kill him.  That’s not good negotiation in my opinion.

There are several protests going on today.  Since the police are on “strike” no one will make sure that the protesters behave.

This is happening all over the country.   We do not know what will happen but the president went to talk to the police headquarters.  They refused to hear him.

And we will keep you posted.

Join us at our October seminar to learn how to earn and diversify globally.