Merri and I are recently back from Jykse Bank’s 9th Global Wealth Seminar.

During the Jyske seminar I was able to meet with some really interesting people such as Bjorn Lomborg. 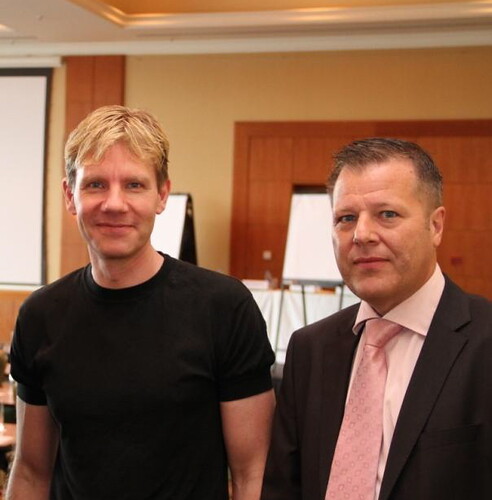 In 2002, Lomborg and the Environmental Assessment Institute founded the Copenhagen Consensus, which seeks to establish priorities for advancing global welfare using methodologies based on the theory of welfare economics.  He is a key figure in the Green Business and Investing trend and his book was part of the documentation that the late Michael Crichton used for his book “State of Fear”.

Listening to the many speakers confirmed that the global economy could see a double dip recession which stressed the importance of green investing and business.

Let me explain why I think that worries of a double dip make green investing especially wise at this time.

Many governments are trying to overcome the economic slow down and their excessive spending creates an economic situation where investors and businesses can be sitting ducks if they do not take extreme care.

The many massive government bailouts have not worked so well but they have pushed interest rates to record lows at the same time that monetary supply has dramatically grown.

This means that non volatile investments pay almost no return at a time when inflation could really start to raise its ugly head.   As long as the economy remains sluggish inflation is at bay… but the second business and employment begins to recover, expect inflation… lots of it.

Investors have to be really smart to gain profit and safety in such circumstances.  One way is to invest in huge problems that are so important they are beyond the recession… such as pollution… shortage of water…. global warming and such. Environmental problems are so important that their their solutions must grow even in a sluggish economy.


In other words to find safe and lucrative investments… go green!

Thomas chose just six shares for that portfolio… two of them Danish:

You may recall how it performed.

What a year. There were some great lessons learned including how ups and downs are magnified by leverage.  The goals of that educational portfolio were threefold.

#2:  Help investors learn how to stick to their good ideas and get out of their bad ones.

#3:  Help investors understand multi currency investing in big ideas because as you will see below…we may need this ability more than ever now.

Returns were breathtaking that year… way up and down…  as were the prices of a majority of shares. We saw great volatility in that portfolio.  The July drop of over 100% gave us a moment of pause, but as a percentage of the portfolio this drop was less than that of the other portfolios we tracked.

In short the green portfolio was the top performer during the good times and bad.

Beyond the performance were pleased that this portfolio attracted the attention of major institutions with the message… “investing in the environment can be very profitable.”

The important fact key to understand in these dangerous economic times is that:

#2: Volatility will be higher.

#3: Big problems create safety because you have to accept risk any way…. so make sure that you at least get plenty of upside potential.

For example… in these times of great global volatility and risk many investors have rushed into US dollar US treasury bonds.  These investments are thought to be safe but have great risk.  The US dollar could fall.  Inflation could destroy the purchasing power of these bonds.  Yet the upside even in the best of conditions is minimal.

Environmental concerns on the other are one of humanity’s biggest problems and the world is just catching on to that fact. Shares in environmental investments have risk as well, but in the best of conditions have a huge upside.

Copenhagen was a great place to think green by the way. The Danes have really put their money where their mouths are when it comes to green.

For example… they have cleaned up the harbor and canals that run through the city… so much so that one can swim in them.   During the seminar there was a big swim competition all around Parliament in the canals with thousands of Danes swimming in the canals.

Our friend Trey Morrison and his wife Courtney joined us for the seminar and Trey was so impressed with this that he decided to swim the canals himself.  We were all staying in the Marriott on the harbor  so I followed Trey out to see.  Could he really? 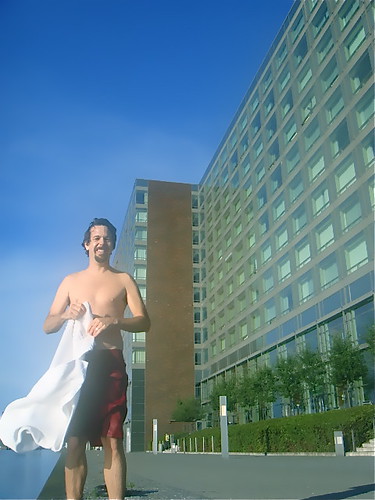 I kinda dared him and… 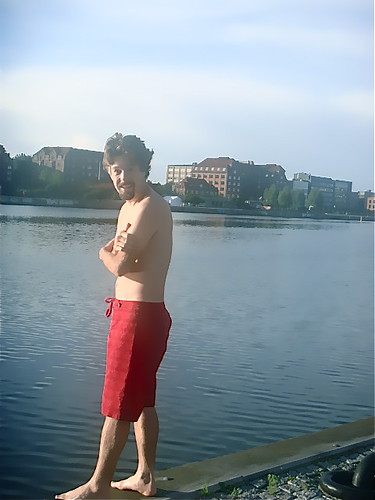 doubted, but with just a moments hesitation he… 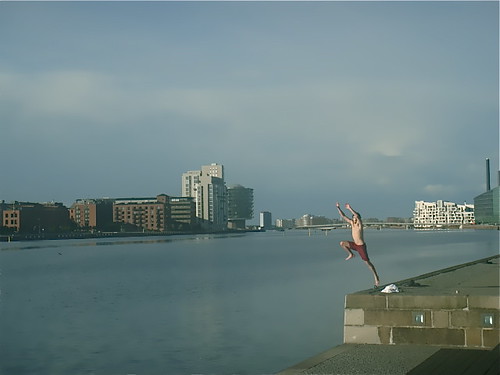 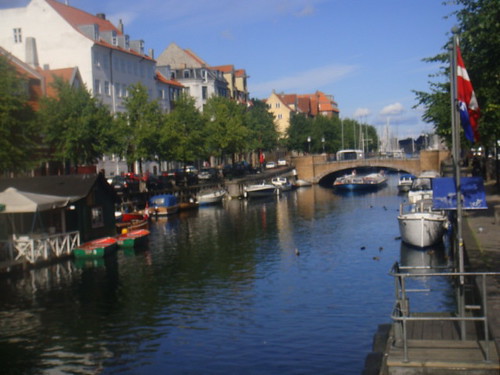 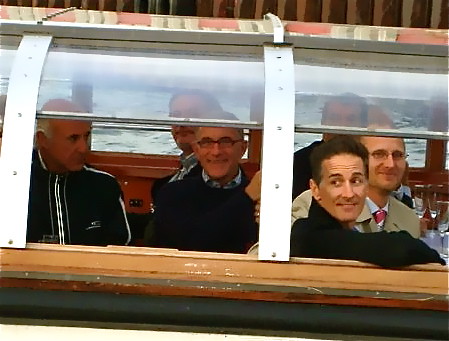 boats with the rest of the delegates.

There were many other indicators showing how green the Danes are becoming.  They have wind turbines… 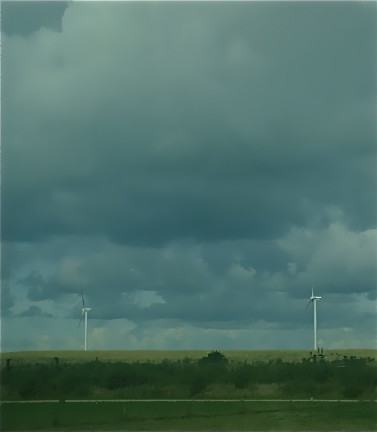 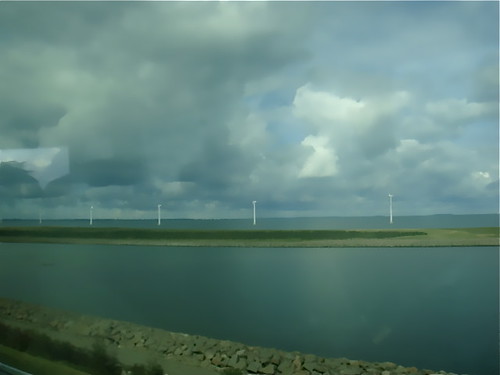 sea.   We saw turbines everywhere as we traveled across Denmark.  The Danes get 20% of their energy overall from wind power.    Sometimes 100% of Denmark’s electricity is wind generated.

It is not surprising that two of the six shares in the green portfolio were of Danish companies.

I was also able to have a great conversation with Stephen Brunner, an American who is head of the American Chamber of Commerce in Denmark (plus he is on the board of Jyske global Asset Management).

He is also chair of the European Council of American Chambers of Commerce (ECACC), introduces this unique and dynamic organization comprised of AmChams from 41 countries.

Through four regional organizations in Asia, Europe, the Gulf Countries and Latin America, AmChams represent the concerns and interests of the business community at the highest levels of government and business in trade policy development. The common bond between AmChams throughout the world is our accreditation by the United States Chamber of Commerce – the world’s largest business federation. The AmCham worldwide network currently encompasses106 AmChams in 91 countries, each one affiliated with the U.S. Chamber of Commerce headquartered in Washington, D.C.

Established in 1963, ECACC serves as the European umbrella organization for AmChams from 41 countries – representing the interests of more than 17,000 American and European companies employing 20 million workers. Originally comprised of mostly western European countries, ECACC has expanded rapidly over the past decade, and is playing a significant role in the emerging markets in Eastern Europe and Eurasia. 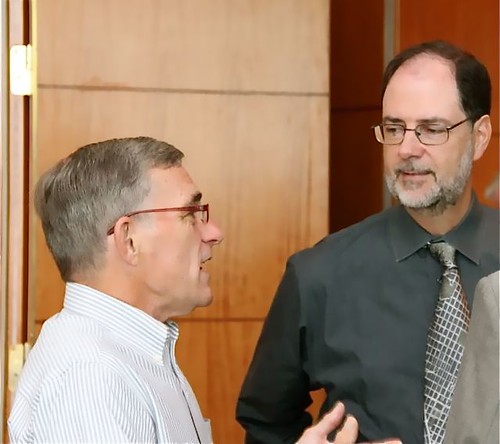 Lean more about the AmCham here.

Anders Stouge the director of the Danish Energy Industries Federation, a part of The Confederation of Danish Industry (known as DI) also led me to insights on how hard the Danes are working to have a sustainable environment.

The DI is the voice of the Danish industry, a private organization funded, owned and managed by 12,000 Danish companies within the manufacturing and service industries.

The DI’s mission is to provide the best possible working conditions for Danish industry and they have a long view that stresses sustainability.  The Danish Energy Industries Federation is a part of DI and consists of approximately 300 member companies that have energy as the primary area of activity. The Danish energy sector is one of the fastest growing export sectors of the Danish economy.

These companies are among others engaged in:

The Danish Energy Industries Federation participates in Energy Camps  which are bilateral strategy labs where the participants find common goals and develop concrete initiatives to benefit consumers and business through climate improvements.  For example one development from the Energy Camps, was to put the all public transport in the third largest city in Denmark) on bio fuel and thus secure the town a position as the worlds’ leading bio-town.

Results on reducing CO2 in Denmark have been impressive. 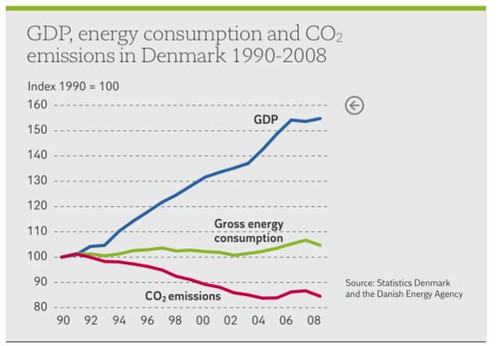 Chart from presentation on Danish energy by Lars Stouge.

The Danish Government is also very active in sustainability and has issued a proposal called ‘Green Growth’, which focuses on the mitigation of the effects of climate changes on agriculture and the food industry sector that focuses on protecting the environment.

In 2009 the Danish Government introduced a bill called ‘Green growth” to spend over 2 billion dollars to help Danish agriculture protect the environment and nature and reduce CO2 emissions.

An Environmental Economic Council has been formed as an economic advisory body established by law in 2007. The Council has 24 members representing unions, employers, NGOs and the Danish Government.  The council is presided over by four independent chairmen normally 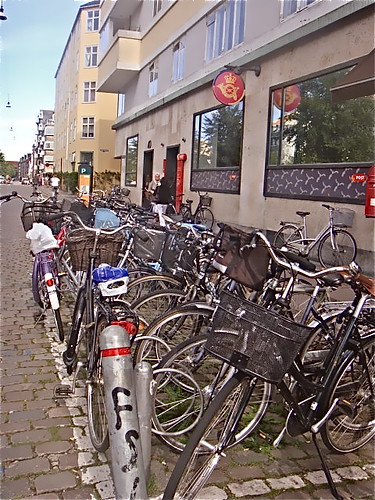 Bikes are a major form of transport in Copenhagen with bikes and bike paths everywhere.  Visiting pedestrians have to take care and remember to look for the bikes as well as the cars.   Living in England and traveling back and forth,  I learned to look left and right for traffic when walking.  In Copenhagen I almost stepped in front of a speeding bike numerous times.

All Danish public institutions are also obliged to mainstream green procurements from electric bulbs and ecological food to IT.  There is government support to redcue  consumption in wrapping and increased recycling efforts, financial support to boost eco-innovation, stimulate organic farming and funds
earmarked  for investments in new technology, sun energy; and subsidies to energy saving lagging in public buildings.

Danish investments I am look at includeVestas the world’s largest wind turbine manufactuer.

Vestas saw its share price slide by more than 20 per cent in August 2010 after the compnay posted weaker than expected quarterly results and downgraded expectations for the rest of the year.  Short term downturns acconpanied by a nervous market… in a big long term opportunity creates extra proift potential.

The key is to not be a sitting duck when the shooting starts. Consider investing part of your portfolio in green investments. We are living through a period of great change whihc creates a lot of uncertainty.  We need harbors of predictability and one such harbor is technology for sustainability.

See more on having a harbor but first if you have not yet tuned in, see me… Steve Forbes and Ken Rogoff on… Jyske TV. 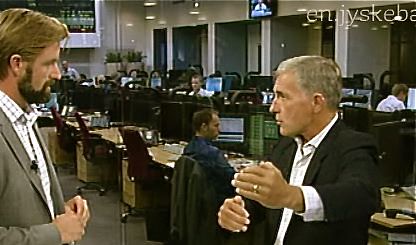 Join us at our farm this October 7 to 10 to learn more about how to be a one man multi national.