Things are heating up and I am not speaking of the weather but of panics and bubbles.

One of the greatest challenges we’ll face in the decade ahead is not being caught in the social whiplash that comes from rapid change. 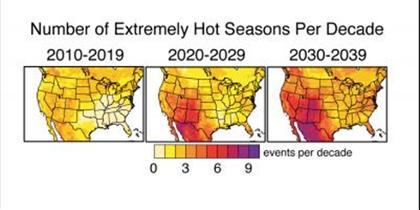 Yes, the weather in 2010 has been the hottest on record.

The first six months of 2010 brought a string of warmest-ever global temperatures.

Not only was last month the hottest June ever recorded, it was the fourth consecutive month in which the standing high mark was topped, according to the US National Oceanic and Atmospheric Administration (NOAA). Indeed, 2010 has already surpassed 1998 for the most record-breaking months of high temperatures.

A USA Today article  by Oren Dorell, “World sizzles to record for the year” goes even further as this excerpt says: The world is hotter than ever.  March, April, May and June set records, making 2010 the warmest year worldwide since record-keeping began in 1880, the National Oceanic and Atmospheric Administration says.  “It’s part of an overall trend,” says Jay Lawrimore, climate analysis chief at NOAA’s National Climatic Data Center. “Global temperatures … have been rising for the last 100-plus years. Much of the increase is due to increases in greenhouse gases.”

Another USA Today article “U.S. could experience many more heat waves in next 30 years” included the graphic above and projects even hotter weather in the decades ahead and says: Killer heat waves caused by climate change could become much more common in the United States over the next 30 years, a two-year study by scientists at Purdue University finds.

Heat waves could become five times as likely between 2020 and 2029 in the western and central United States as they were from 1951-1999. The 2030s would be even hotter — most of Utah, Colorado, Arizona and New Mexico might experience at least seven summer seasons as intense as the hottest summers ever recorded between 1951 and 1999.

These heat events will be much like “the one now occurring in the eastern United States or the kind that swept across Europe in 2003 that caused tens of thousands of fatalities,” says Noah Diffenbaugh, now a professor of environmental Earth system science at Stanford and the lead author of the study. “Those kinds of severe heat events also put enormous stress on major crops like corn, soybean, cotton and wine grapes, causing a significant reduction in yields.”

Those of us in the Western world were taught a social ideal based on a contract that:

If we work hard we succeeded.

We can store value.

If we are honest and follow the rules, we are safe.

These rules may no longer apply.  Many who have followed them have been clobbered or worse in the recent years.

So how do we stay cool when everyone else is hot?

To begin we can keep our body balanced.  Bad emotions lead to physical balances. The physical imbalance causes the emotional imbalance to accelerate and the negative loop expands.

Here are three ways to stay cool and in balance.

World sizzles to record for the year

U.S. could experience many more heat waves in next 30 years

← Gain Time With Wisdom of the Masses Good Value in Sunshine →