The success of your Micro Business and Global Investing depends on your power to concentrate as you integrate your intuition, experience and logic. 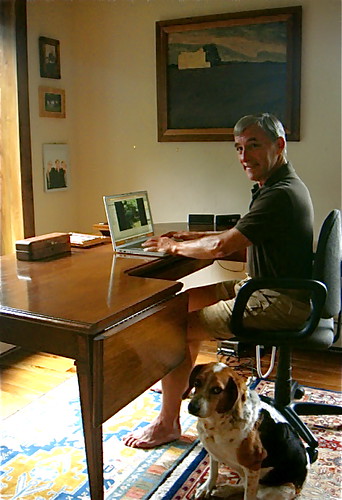 Here is a problem. Here I am in my upstairs office on the farm. I’ll explain in a minute.

First, remember “Problems create opportunity” and I have seen… or rather felt one of mankind’s biggest problems brewing.  This is why a new book immediately attracted my attention.

The problem relates to the internet and concentration.

Concentration is success. Concentration… in a way… is everything.  Here are some quotes about the vital importance of concentration.

“Concentration is the key to economic results. No other principles of effectiveness is violated as constantly today as the basic principle of concentration.” Peter F. Drucker

“My son, pay attention to my wisdom, listen well to my words of insight, that you may maintain discretion and your lips may preserve knowledge.” Solomon’s Proverbs 5:1

“Concentration is my motto – first honesty, then industry, then concentration.” Andrew Carnegie

“For he who has no tranquility there is no concentration.” Bhagavad Gita

“I never hit a shot, not even in practice, without having a very sharp in-focus picture of it in my head.” Jack Nicklaus

“Whoever listens to what is taught will succeed, and whoever trusts the Lord will be happy.” Proverbs 16:20

“May your mind be infused with ‘one’ thought (concentration of mind)! May every action of yours be embellished by ‘one’ thought! May your resolution be ‘one’. You, who are acting to the contrary, your disposition shall have opposite orientation.”Atharva Veda

“To do two things at once is to do neither.” Publilius Syrus

“Whatever your hand finds to do, do it with all your might.” Ecclesiast 9:10

“You must remain focused on your journey to greatness.” Les Brown

“Concentrate all your thoughts upon the work at hand. The sun’s rays do not burn until brought to a focus.” Alexander Graham Bell

“A person who aims at nothing is sure to hit it”.

“Do whatever you do intensely.” Robert Henri

“Beware lest you lose the substance by grasping at the shadow.” Aesop

“If you chase two rabbits, both will escape.”

“It is a process of diverting one’s scattered forces into one powerful channel.” James Allen

“It’s simply a matter of doing what you do best and not worrying about what the other fellow is going to do.” John Adams

“Ninety percent of my game is mental. It’s my concentration that has gotten me this far.” Chris Evert

“Concentration and mental toughness are the margins of victory.” Bill Russell

Over recent years I have felt a problem brewing with my concentration due to the computer and internet. 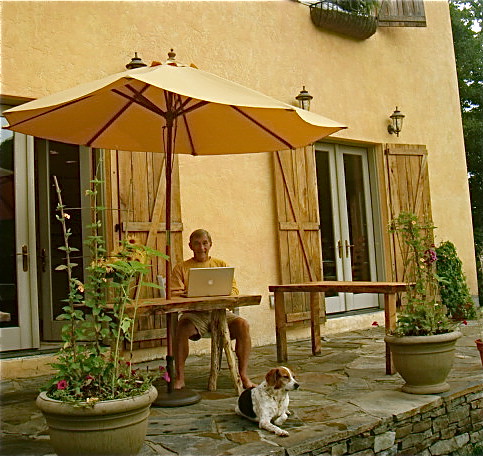 The easy problem is that my profession… as a writer demands that I spend hours sitting in front of a computer and I can feel that this is addictive.

The solution to this has been easy…

I discipline myself to take breaks… to walk… to work outside… 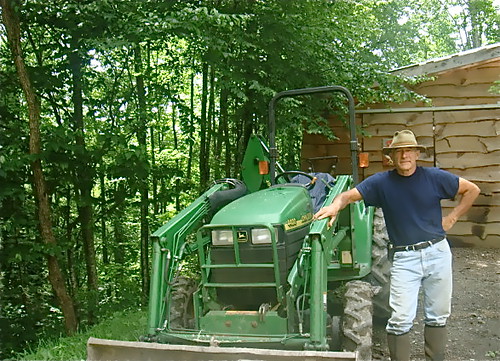 to do exercises that connect the body and mind… to… 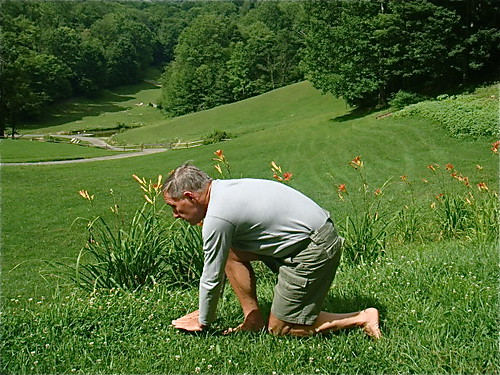 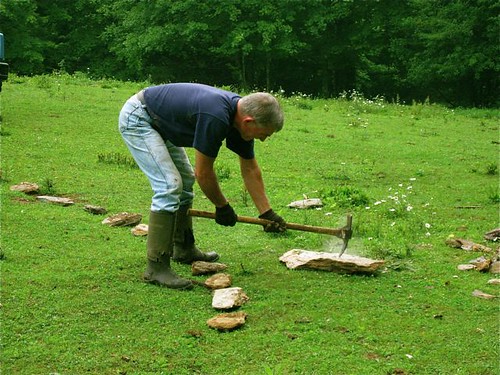 get my hands in the earth and to… 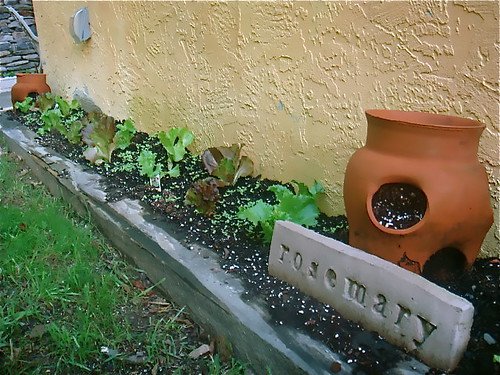 grow our own food and… 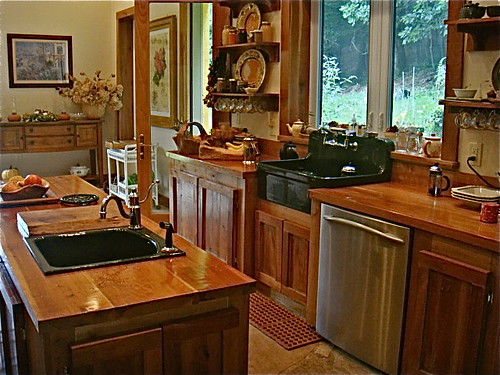 get in our kitchen and… 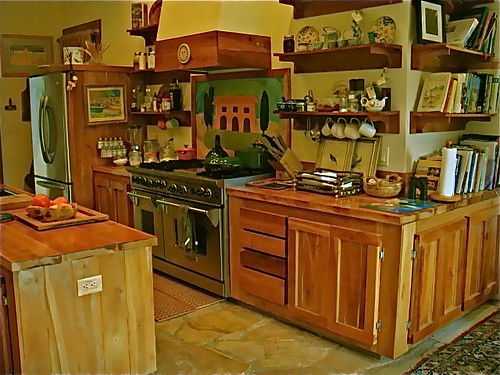 However the bigger problem I have been feeling is how the internet and email distracts.

There is so much competition in that computer for my attention so the temptation is to skim… to bounce over everything and not to delve deeply into anything with thought.

This vague feeling that this process is somehow wrong has been lingering so when Merri sent me the book review for the book “The Shallows” below… I jumped on it… drove all the way to town (an hour’s time) to load it on my Kindle (cellphones do not work here so we have to go in to get the books to be entered on the Kindle).

Here is the Book review for “The Shallows”.

Carr—author of The Big Switch (2007) and the much-discussed Atlantic Monthly story “Is Google Making Us Stupid?”—is an astute critic of the information technology revolution. Here he looks to neurological science to gauge the organic impact of computers, citing fascinating experiments that contrast the neural pathways built by reading books versus those forged by surfing the hypnotic Internet, where portals lead us on from one text, image, or video to another while we’re being bombarded by messages, alerts, and feeds. This glimmering realm of interruption and distraction impedes the sort of comprehension and retention “deep reading” engenders, Carr explains. And not only are we reconfiguring our brains, we are also forging a “new intellectual ethic,” an arresting observation Carr expands on while discussing Google’s gargantuan book digitization project. What are the consequences of new habits of mind that abandon sustained immersion and concentration for darting about, snagging bits of information? What is gained and what is lost? Carr’s fresh, lucid, and engaging assessment of our infatuation with the Web is provocative and revelatory. –Donna Seaman
Review

Nicholas Carr has written an important and timely book. See if you can stay off the web long enough to read it! (Elizabeth Kolbert, author of Field Notes from a Catastrophe: Man, Nature, and Climate Change )

Neither a tub-thumpingly alarmist jeremiad nor a breathlessly Panglossian ode to the digital self, Nicholas Carr’s The Shallows is a deeply thoughtful, surprising exploration of our “frenzied” psyches in the age of the Internet. Whether you do it in pixels or pages, read this book. (Tom Vanderbilt, author, Traffic: Why We Drive the Way We Do (and What It Says About Us) )

Nicholas Carr carefully examines the most important topic in contemporary culture—the mental and social transformation created by our new electronic environment. Without ever losing sight of the larger questions at stake, he calmly demolishes the clichés that have dominated discussions about the Internet. Witty, ambitious, and immensely readable, The Shallows actually manages to describe the weird, new, artificial world in which we now live. (Dana Gioia, poet and former Chairman of the National Endowment for the Arts )

The core of education is this: developing the capacity to concentrate. The fruits of this capacity we call civilization. But all that is finished, perhaps. Welcome to the shallows, where the un-educating of homo sapiens begins. Nicholas Carr does a wonderful job synthesizing the recent cognitive research. In doing so, he gently refutes the ideologists of progress, and shows what is really at stake in the daily habits of our wired lives: the re-constitution of our minds. What emerges for the reader, inexorably, is the suspicion that we have well and truly screwed ourselves. (Matthew B. Crawford, author of Shop Class As Soulcraft )

Ultimately, The Shallows is a book about the preservation of the human capacity for contemplation and wisdom, in an epoch where both appear increasingly threatened. Nick Carr provides a thought-provoking and intellectually courageous account of how the medium of the Internet is changing the way we think now and how future generations will or will not think. Few works could be more important. (Maryanne Wolf, author of Proust and the Squid: The Story and Science of the Reading Brain )

In his new book, The Shallows, Nicholas Carr has written a Silent Spring for the literary mind. (Michael Agger – Slate )

Starred Review. Carr provides a deep, enlightening examination of how the Internet influences the brain and its neural pathways. Carr’s analysis incorporates a wealth of neuroscience and other research, as well as philosophy, science, history and cultural developments … His fantastic investigation of the effect of the Internet on our neurological selves concludes with a very humanistic petition for balancing our human and computer interactions … Highly recommended. (Library Journal )

Absorbing [and] disturbing. We all joke about how the Internet is turning us, and especially our kids, into fast-twitch airheads incapable of profound cogitation. It’s no joke, Mr. Carr insists, and he has me persuaded. (John Horgan – Wall Street Journal )

The subtitle of Nicholas Carr’s The Shallows: What the Internet is Doing to Our Brains leads one to expect a polemic in the tradition of those published in the 1950s about how rock ’n’ roll was corrupting the nation’s youth … But this is no such book. It is a patient and rewarding popularization of some of the research being done at the frontiers of brain science … Mild-mannered, never polemical, with nothing of the Luddite about him, Carr makes his points with a lot of apt citations and wide-ranging erudition. (Christopher Caldwell – Financial Times )

This is a measured manifesto. Even as Carr bemoans his vanishing attention span, he’s careful to note the usefulness of the Internet, which provides us with access to a near infinitude of information. We might be consigned to the intellectual shallows, but these shallows are as wide as a vast ocean. (Jonah Lehrer – The New York Times Book Review )

You really should read Nicholas Carr’s The Shallows . . . Far from offering a series of rants on the dangers of new media, Carr spends chapters walking us through a variety of historical experiments and laymen’s explanations on the workings of the brain . . . He makes the research stand on end, punctuating it with pithy conclusions and clever phrasing. (Fritz Nelson – Information Week )

The Shallows certainly isn’t the first examination of this subject, but it’s more lucid, concise and pertinent than similar works … An essential, accessible dispatch about how we think now. (Laura Miller – Salon )

If you retain any residual aspirations for literary repartee, prefer the smell of a book to a mouse and, most important, enjoy the quiet meanderings within your own mind that can be triggered by a good bit of prose, you are the person to whom Nicholas Carr has addressed his riveting new book. (Robert Burton – San Francisco Chronicle )

The Shallows isn’t McLuhan’s Understanding Media, but the curiosity rather than trepidation with which Carr reports on the effects of online culture pulls him well into line with his predecessor . . . Carr’s ability to crosscut between cognitive studies involving monkeys and eerily prescient prefigurations of the modern computer opens a line of inquiry into the relationship between human and technology. (Ellen Wernecke, – The Onion A.V. Club )

Persuasive … A prolific blogger, tech pundit, and author, [Carr] cites enough academic research in The Shallows to give anyone pause about society’s full embrace of the Internet as an unadulterated force for progress . . . Carr lays out, in engaging, accessible prose, the science that may explain these results. (Peter Burrows – BusinessWeek )

Another reason for book lovers not to throw in the towel quite yet is The Shallows…a quietly eloquent retort to those who claim that digital culture is harmless—who claim, in fact, that we’re getting smarter by the minute just because we can plug in a computer and allow ourselves to get lost in the funhouse of endless hyperlinks. (Julia Keller – Chicago Tribune).

I believe that the key to my small successes has been the ability to concentrate my intuition, experiences and logic to connect dots.

The fact that excessive use of the internet is reconfiguring our brains, and creating new mental habits that reduce our ability to focus and concentrate has profound implications… good and bad.  If our brightest thinkers “abandon sustained immersion and concentration for darting about, snagging bits of information” how will this affect us and heirs.

I am sure I’ll be back to you on what I am reading but this seemed so important I did not want to delay sharing this thought… so you can concentrate on it as well.

One way to improve concentration is with music.  See how we help readers learn how to absorb, retain and recover information so effectively that they can learn to speak Spanish in just four days.