There is opportunity because the British pound and multi currency portfolios that are short the US dollar have been pounded. 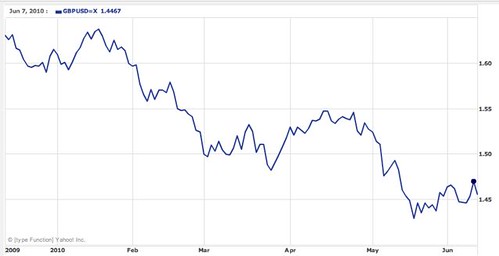 This a six month pound US dollar from finance.yahoo.com as of last week.

This year Merri and I have the delightful task of flying to England for our youngest daughter’s wedding. Way to go Ellie!  It looks like our stay will really be inexpensive.  A hotel that would have cost $200 a night might be (according to Morgan Stanley)  as little as $129.

There are numerous reasons we’ll see below for the weak British pound.  Britain has many problems.  However problems create opportunity or as the British would say “Where there is muck, there is brass”.

So let’s take a look at the pound.

I asked Thomas Fischer at Jyske Global Asset Management for their view and he wrote:  We were contemplating selling pounds in our managed Forex Portfolio but decided not to take a position as it seems a little oversold at the current level (against the USD). Morgan Stanley has a target of 1.29 in the fourth quarter of 2010. The current level is 1.47.   Analysts at BCA think the budget published on June 22nd could be a decider for the direction of GBP.  They  also thinks the pound is  oversold at current levels but feel that a disappointing budget and a possible downgrading from Fitch could mean trouble for the UK economy and the British  pound.

A look at economic data in the Economist shows that Britain is currently low man on the currency fundamental totem pole.

Compared to the US, China, Japan, Canada and the Eurozone Britain has the worst budget balance by far.  The low interest rate on the pound does not compensate for this fact.  However the trade and current-account balances are very good compared to the US. These balances normally have a very negative influence on a currency’s parity so this fact is an indicator of strength.

The British economy does not look in a strong position to pull the pound up by its boot straps.

Britain’s GDP has dropped.  Industrial production is lagging.   Inflation is higher than in the other countries of this comparison.  Lower unemployment is the only positive factor and 8% is not a good unemployment rate… just not as bad as the US and euro zone.

The stress on BP over the Gulf oil spill also has the short term potential of pushing the pound down even further.

The downwards pressure is most likely to be emotional rather than real. However BP is a huge firm and as the chart from www.finance.yahoo.com shows  BP’s share value in New York as of last Friday fell over 50 percent from the beginning of the Gulf oil spill in April.

Some analysts say the crisis could lead to the takeover or even the bankruptcy of BP which is a global company traded both in London and New York but is seen as one of Britain’s most valuable companies.

There is a huge exposure of British pension funds to BP.  The view that BP is British creates a British pound concern if the company is being continually beaten up by the press.

BP is the third largest oil company in the world, after ExxonMobil and Royal Dutch Shell, with 80,000 employees worldwide as of last December, sales of $239 billion in 2009 and a market value — even after the recent losses — of more than $100 billion.

At a time when Britain is desperate to reduce its deficit, BP is a huge contributor to British tax revenue, paying nearly $1.4 billion in taxes on its profits last year.  They are Britain’s largest tax payer.

Its reputation for large, reliable dividends have made it a favorite of pensions… especially British pensions.

BP’s dividend payments accounted for nearly 13 percent of the dividends handed out by British companies last year, according to FairPensions, a London-based charity.

So continual bad news about BP could be depressive on the pound. This is where opportunity may arise.

BP is British yes, but also has extensive holdings in the United States.  It merged with Amoco, the former Standard Oil of Indiana, in 1998, and about 40 percent of its shares are held by American investors.  It owns a refinery in Texas City, Tex., that is one of the world’s largest, and a 50 percent interest in the Trans Alaska Pipeline, in addition to a huge gasoline marketing operation.

When incorrect short term news drives the market, opportunity is created and there is a risk that BP’s bad news will over influence selling of the British pound.  Watch for this and if you see it, buy pound investments… maybe even BP.

I asked JGAM their opinion and they replied:

We do not have BP in our portfolio but it is an interesting case. Morgan Stanley is positive on BP and has a target of 600p which was the price at the beginning of the year. The current price is 370 so a good potential. I have attached the Morgan Stanley analysis.

Morgan Stanley says on June 14, 2010: BP plc. BP has indicated this morning that the LMRP containment cap, installed on June 3, is now collecting c.21kboe/d of oil/gas (15kb/d oil plus nat gas that is being flared).  The first planned addition to the LMRP, taking hydrocarbons from the choke line of the failed BoP to the surface via a separate riser, is expected to begin operations in the next few days.  In addition, BP plans to add another 10kb/d of oil processing capacity by the end of June, bringing total processing capacity to 38kb/d – which equates to the high end of the range regarding estimated flow rates, now sitting at c.40kb/d.  BP puts costs to date at $1.6bn, while press reports (e.g. FT, June 14, 2010) suggest the US administration wants an independent third party to administer an escrow account set aside to meet claims.

Valuation methodology and risks: We set our 600p price target based on a DCF valuation at the forward curve (LT $85/bbl). Our DCF assumes a WACC
of 7.5% and a 2% terminal growth rate. We estimate Macondo costs to be c.$14bn and assume a 30% depreciation in the value of the GoM portfolio due to the moratorium to offshore drilling.

Key risks: A more extensive period of uncertainty regarding how and when the oil flow from the Macondo well will be controlled and then ‘killed off’.

Clean-up costs may escalate off the back of a more active hurricane season.

Although BP offers one of the highest dividend yields among the integrateds, its quarterly dividend payment may be increasingly influenced by the political environment.

Having said all this, BP shares could be very attractive because these shares offer good value.

BP is not like GM was… an icon whose times had past. BP is a well funded, successful, globally diversified firm with one huge problem that it appears to be able to afford.

BP pledged to put 20 billion dollars into an escrow account last week.  That is a lot of money… yet is only about a year’s profit for BP. Let’s say they have to triple this amount and pay out 6o billion. This is only three year’s profit for the firm… so, if the share were fairly priced before the spill they are a good buy at half the price even without a profit for three years.

Let me hastily add that I will NOT be investing in BP shares.  Merri and I have given our investment advisers a block long ago.. no pharmaceutical… no alcohol…. not tobacco… no weapons… no oil. So even if BP  was just another oil company… without a terrible corporate culture, I would not be buying.

However I recognize that others have different views so do write about shares I personally won’t buy… for example I often look at Novo Nordisk, the large Danish pharmaceutical company and feel I would not be diligent if I did mention the potential in a BP share speculation.

There may be extra opportunity in many UK companies right now due to the depressive effect of the BP scandal.  BP has lost half its share value. The  London Stock Exchange has also declined since the beginning of the oil spill as we can see on this one year chart of the Financial Times Stock Exchange 100 Index.

The UK stock market was a good value market even before this decline. We saw in our last major market value update that the London Stock Exchange is one of six top value major markets in the world.

Watch for arbitrage opportunities… where the pound falls so quickly that the price of BP shares listed in London are lower than the BP share listed in the USA.

This is a big enough company that big traders will equalize the BP pound versus dollar price so you would have to be quick if this situation arises.  The more likely opportunity is that emotion over the disaster from the oil spill combined with a weak British pound will make BP shares an extra good value.

Here is a five year chart of the share price.

An investment trust is the British equivalent of a closed end mutual fund.

Join Merri and me in Copenhagen for another big value.  The strong US dollar makes this the year to enjoy Europe and Thomas Fischer at Jyske just sent me this note: Gary due to the increasing US dollar the fee for our August seminar in Copenhagen for Americans has dropped from about $2,050 to $1,700, a 15% discount.

I love attending these seminars because of the great speakers and this year one speaker will be Bjorn Lomborg known as the “Skeptical Environmentalist.”

In 2002, Lomborg and the Environmental Assessment Institute founded the Copenhagen Consensus, which seeks to establish priorities for advancing global welfare using methodologies based on the theory of welfare economics.  You can see some of his ideas at a youtube video here.