There is a huge natural health structural change taking place in the Western world that can bring you health and wealth. 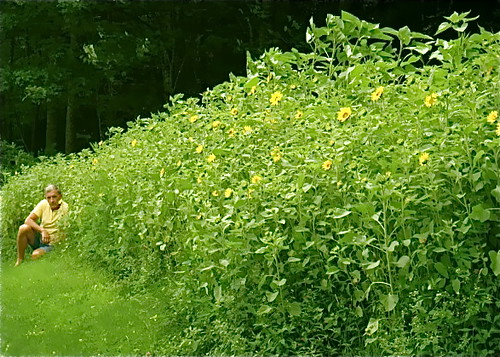 I have been researching ways to use sustainable agriculture in our upcoming era.  We have learned that we can grow sunflowers easily in North Carolina… ideal for bio-diesel.

Numerous messages at this site have looked at ways to adapt to and prosper with changes in our social economic structure.  The way to do this is to invest or have an international micro business that serves change in one of these three ways:

Here is an example of  how to do this.

Recently Merri and I watched a CD of the film “The Informant,” an adaptation of a book about Archer Daniels Midland price fixing of corn syrup. The film stars Matt Damon.  In 1993, senior ADM executives were indicted on criminal charges for engaging in price-fixing within the international lysine market. Three of ADM’s top officials were sentenced to federal prison and fined $100 million, the largest antitrust fine in U.S. history at the time. ADM also paid $400 million to settle a class action antitrust suit.

Overall this film portrayed a disgusting corporate culture that, in this day and age, we are all to familiar with.  Maybe this is the way life has always been… due to human nature… but it is nasty to see business (or any institution) act this way anyhow.

However during the film Merri’s continual comment was… “they are missing a huge point… the money is bad  yes… but what don’t they say anything about how bad lysine is for our health.“

Not only was big business trying to cheat the consumer…. they were trying to addict them to corn syrup a really unnatural, unhealthy product.

High Fructose Corn Syrup may be one of the most insidious health risks we currently face.

Merri is right… there is a great deal of evidence that many big food businesses not only push their financial thinking to the short term limit… at the expense of the buyer… they also ignore the health aspects of what they do.

In fact some food businesses might even add harmful ingredients if the ingredient creates addictions that reinforce sales.

In this case there are suggestions that high-fructose corn syrup (lysine is the main of four ingredients that produce HFCS) is not good for one’s health. 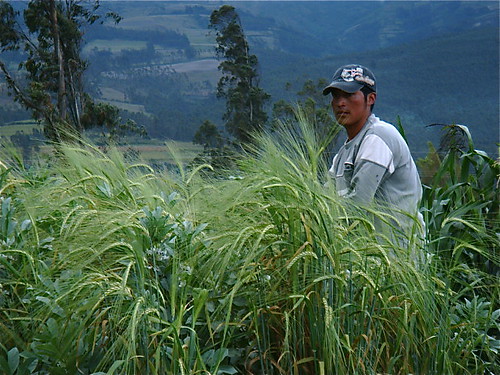 We have learned a lot from the organic test gardens near our hotel in Cotacachi Ecuador.

The excerpt below to an Economist article “Sickly sweetener” explains why:   Americans are losing their taste for a sugar substitute made from maize

IN A sun-dappled yard, above the cheerful whoops of healthy children, one mother assures another that high-fructose corn syrup (HFCS), a sweetener made from maize (corn), is, like sugar, “fine in moderation”.

Yet fewer and fewer Americans, it seems, are convinced of the claim, made in a series of advertisements by the Corn Refiners’ Association, an industry group.

Demand for HFCS declined by 8% between 2007 and 2009. Several fast-food chains and consumer-goods firms have ostentatiously dropped it from their recipes. Michelle Obama, the first lady, has expressed concern. Some Americans feel so strongly that they have posted spoof advertisements online, explaining that lead poisoning, Nazism and genital mutilation are also “fine in moderation”.

HFCS, which became a common ingredient in processed foods in the 1980s thanks in part to an abundance of subsidised maize, is cheaper than sugar. A rise in the price of sugar in recent years has increased the difference, yet big firms such as Pepsi and Kraft have substituted sugar for HFCS in many of their products. ConAgra, another big foodmaker, announced earlier this month that it had removed HFCS from its Hunt’s ketchup brand, and slapped a prominent label to that effect on the bottles. The move, the firm says, reflects consumer demand.

The most common complaint about HFCS is that it has helped to make Americans fat. But that idea is hotly disputed. The American Medical Association and the American Dietetic Association argue that there is no direct link between obesity and consumption of HFCS in America, although both have surged in the past 30 years. Other studies have fingered HFCS, including one released in March by scientists at Princeton, which found that rats gained more weight eating it than table sugar. HFCS’s defenders blame perfidious sugar refiners for their bad press.

Another complaint centres on subsidies for maize, which, the theory runs, have warped America’s entire food chain. Yet high tariffs on imported sugar, to the benefit of America’s beet and cane farmers, have also helped to promote HFCS. Mike McConnell of the Department of Agriculture’s Economic Research Service estimates that HFCS and sugar would be roughly comparable in price in a free market. In that respect, at least, the two products are as bad as each other.

I stumbled upon many websites in my research on corn syrup that give a pretty good explanation of what High Fructose Corn Syrup is.  All of these sites have the exact same data so most are copies and I could not figure out which came first. However I liked the article “Information on High Fructose Corn Syrup and Beekeeping/Honey information” at DRmitken.com.   A link to the entire article is below. Here is an excerpt:

HFCS is produced by processing corn starch to yield glucose, and then processing the glucose to produce a high percentage of fructose. Three different enzymes are needed to break down cornstarch, which is composed of chains of glucose molecules of almost infinite length, into the simple sugars glucose and fructose.

First, cornstarch is treated with alpha-amylase to produce shorter chains of sugars called polysaccharides. Alpha-amylase is industrially produced by a bacterium, usually Bacillus sp. It is purified and then shipped to HFCS manufacturers.

Next, an enzyme called glucoamylase breaks the sugar chains down even further to yield the simple sugar glucose. Unlike alpha-amylase, glucoamylase is produced by Aspergillus, a fungus, in a fermentation vat. [I once wrote an article about this for “The Potomac Sporophore”, the newsletter for the Mycological Association of Washington, D.C.]

There are two more steps involved. First is a liquid chromatography step that takes the mixture to 90 percent fructose. Finally, this is back-blended with the original mixture to yield a final concentration of about 55 percent fructose-what the industry calls high fructose corn syrup. The purpose for this blend id that HFCS has the same “sweetness” as an equal amount of sucrose from cane or beet sugar. HFCS is cheaper than sugar. It is also very easy to transport which translates into lower costs and higher profits for food producers.

The development of the HFCS process came at an opportune time for corn growers. Refinements of the partial hydrogenation process had made it possible to get “better” shortenings and margarines out of soybeans than out of corn. HFCS filled a void as demand for corn oil margarine declined. Lysine, an amino acid, can be produced from the corn residue after the glucose is removed. Basically food conglomerates break down commodities into their basic components, and then put them back together again as processed food.

Today HFCS is used to sweeten jams, condiments like ketchup, and soft drinks. It is also a favorite ingredient in many so-called health foods. Four companies control 85 percent of the $2.6 billion business-Archer Daniels Midland, Cargill, Staley Manufacturing Co. and CPC International. In the mid-1990s, ADM was the object of an FBI probe into price fixing of three products-HFCS, citric acid and lysine-and consumers. Allegations of corporate manipulation still abound.

Two of the enzymes used, alpha-amylase and glucose-isomerase, are genetically modified to make them more stable. Enzymes are large proteins and through genetic modification specific amino acids in the enzymes are changed or replaced so the enzyme’s “backbone” won’t break down or unfold. This allows the industry to get the enzymes to higher temperatures before they become unstable.

Sucrose is composed of glucose and fructose. When sugar is given to rats in high amounts, the rats develop multiple health problems, especially when the rats were deficient in certain nutrients, such as copper. The researchers wanted to know whether it was the fructose or the glucose moiety that was causing the problems. So they repeated their studies with two groups of rats, one given high amounts of glucose and one given high amounts of fructose. The glucose group was unaffected but the fructose group had disastrous results. The male rats did not reach adulthood. They had anemia, high cholesterol and heart hypertrophy-that means that their hearts enlarged until they exploded. They also had delayed testicular development. Dr. Field explains that fructose in combination with copper deficiency in the growing animal interferes with collagen production. (Copper deficiency, by the way, is widespread in America.) In a nutshell, the little bodies of the rats just fell apart. The females were not so affected, but they were unable to produce live young.

According to Dr. Field, all fructose must be metabolized in the liver. The livers of the rats on the high fructose diet looked like the livers of alcoholics, plugged with fat and cirrhotic.” HFCS contains more fructose than sugar and this fructose is more immediately available because it is not bound up in sucrose. Unfortunately HFCS is used in many products aimed at children.

Big business may have been doing us bad… cheating on price and shoving a really bad ingredient into a huge variety of our foods. 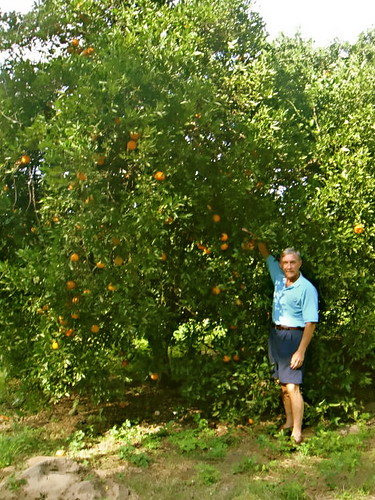 We are testing the use of Bio Wash in our orange groves in Florida. Indication are a higher sugar content in the fruit as well as reductions in pesticides.

Adaptation example. This business is simple enough entitled Stop High Fructose Corn Syrup. This is a web site aimed at eliminating High Fructose Corn Syrup for better health.  The offer a food list… of foods without HFCS… recipes etc. The site is not currently monetized in any way I saw at first glance. This means that either that the developers have set this up as a not for profit business… are just getting started and have not yet monetized or do not know what they are doing.

Whatever the situation… this site is a great example and holds the seeds of a nice micro business… tightly focused on solving a really big problem.

You can see it at www.stophfcs.com/list.html

Mitigation example. We saw above how HFCS can have a negative impact on the liver.  A liver support (via information and or supplements) business would help mitigate the impact of living in a world soaked in HFCS.

Structural Change example. One structural idea is to change the retailing of food.  We saw above how many health foods are loaded with HFCS. This highlights a fact that most health products and health food stores are pretty phony. Their main claim to fame is higher prices.  No HFCS website shopping or a no HFCS store could change the way people shop. Shift the shopping ideal from a vague fussy cuddly health food spin to real specifics that address real problems.

The introduction of High Fructose Corn Syrup into the Western food supply is surly a big problem.  As more consumers become aware of the risks, many micro business opportunities will grow.

Create a business that delivers an honest message and honest products. Sell products with greater objective information. Sell food with trust.  The market may be ready for this… fed up with spin and overwhelmed with it from the last big business debacle in the Gulf of Mexico.