The more business you do, the more micro business opportunities multiply. 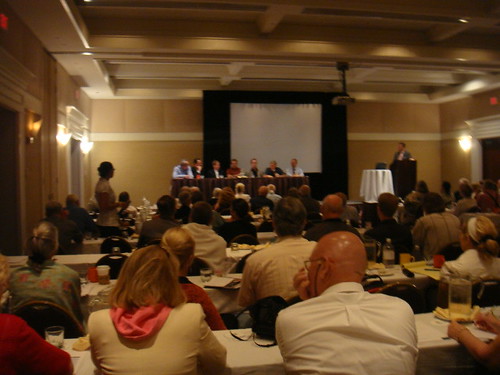 Our micro business began with a focus on multi currency investing when I formed a strategic alliance with Jyske Bank over 25 years ago.  Here I am speaking at a Jyske seminar.

As in life… so in business.  The hardest part of just about anything… including having a micro business… is getting started.

Yet the biggest error we can make is to NOT start because as Sun Tsu says in the Art of War: Opportunities multiply as they are seized.

I can attest to the fact that this statement is true.

Take Merri’s and my micro business as an example.

#2: How to have your own international micro business.

4: How to live better in Smalltown USA.

#5: How to gain better health in natural ways.

Our business is so busy we can barely keep up with all five areas.  Yet the business was not always this way.  We did not plan to have this evolution from the start. 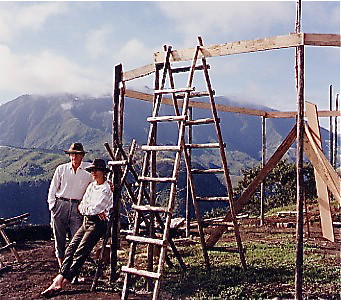 Our international micro business has taken Merri and me around the world. He we are building a shamanic hut at Rosaspamba in the Andes.

The business began with a focus on global investing.  Serving our readers and delegates led us to see that many needed to create income as well as to invest.

Research on international investong and business led us to Ecuador… where we fell in love with this country.

Working with Americans and Canadians who wanted to move to Ecuador showed us that for every person moving south, there were eight or nine who wanted to move and change their life, but who were not able to leave the US… so our Smalltown US focus grew.

Both our Ecuador and Smalltown USA businesses help us learn that one huge issue those who were unhappy faced… was with their health care… inadequate or overpriced.  These revelations plus the time we spent living with an Ecuador yatchak  turned into our focus on natural health.

Plus we learned that each of these categories are just different spokes on the same wheel.  All lead to the prime directive in our business… give valuable useful interesting contacts and information that help make our readers’ lives better.

In short our business is about five times busier than expected and none of the specifics were planned.  We just started knowing that as we earned we would learn and evolve.

Knowing how to get started so that your opportunities can grow sets you free to enjoy our quantum world.  Starting frees you from inertia, lethargy, boredom and ruts.


Your micro business or global life is more than money.  Both bring expanded horizons that bring you into a new freer world.

A study in “USA Today” showed that for 46 million Americans independence is the main reason most had for starting their own business, not cash.  Independence for many is far more important than wealth!

Today increased freedom and job security are important reasons why people have their own businesses.  This makes enormous sense for anyone, doctors, dentists, accountants, attorneys, investors as well as businessmen.

Every profession in the U.S. today is demanding and vulnerable to flawed tort misuse and onerous government interference.
An international micro business brings increased independence with a full or part time business which generates increased income beyond the U.S. legal and tax jurisdiction.

The tax benefits and asset protection benefits gained from international business also enhance freedom. Numerous areas of tax legislation offer special tax savings for businesses abroad. For example by establishing a Foreign Sales Company, a U.S. company that exports manufactured goods having at least 50% U.S. content can usually achieve a permanent tax exemption for a portion of its import profits. Another area of the Tax Code (IRC, section 957 (a) of Subpart F) allows profits made abroad with genuine non U.S. shareholders to remain totally beyond IRS jurisdiction. This is especially easy to do if you know how to raise money abroad.

Holding assets outside one’s own jurisdiction also gives a business enormous legal and practical asset protection. If you know how to raise money abroad you can always have access to wealth that creditors cannot take from you.

Having your own business enhances security. Owners never get fired, made redundant, downsized, laid off, shifted sideways or forced to retire unless they decide to quit working. The owner of a business is always the last to go.

Having an international business is the ultimate form of security and freedom.

International business is also the ultimate area of growth and security.  The sun always shines somewhere!  When we look internationally, we can gain more paths to follow and the numerous places where opportunity can grow.

Today it is possible for anyone to have at least a part time international business. The secret is simply to start. But it is important to start slowly and gain experience.

Do you have a thought… a business idea or an investment hunch that you are ignoring?

Think twice about acting on it.  When you do act, you put an incredible force, the laws of  non-linear dynamics to work for you. It is the action in chaos that allows opportunity to expand for you.

Quantum scientists are quietly proving that intuition and prosperity go hand in hand. Studies in non-linear dynamics (also called Chaos Theory) suggest there is more to our gut feelings than we know.

This infinity is a fact which makes most Western thought processes fall short. Take most Western investment and business planning as an example. Our thought is usually conducted through a logical, linear progression that separates and catalogues all things. This process is flawed because chaos theory shows reality is not linear. Nothing in the universe is separated from the whole.

Take the linear process of driving from home to work. Throw in a fender bender and you go places you would never expect.

This is true of investing and business as well. The best laid plans are usually altered dramatically by one small unexpected event.

True wealth comes more easily if you blend intuition with your logic because the non-linear dynamics within us tap into infinite knowledge and make connections our reasoning process cannot always fathom.

This fact allows opportunity to expand itself for you beyond your dreams!


An example of how chaos theory works can be seen by how our wellbeing, lifestyle and wealth today are dramatically affected by a Dutch Man of War raid on one Portuguese cargo ship in the Malacca Straits in 1604.

This caused such an international fuss that the Dutch hired a man named DeGroot, to write a legal opinion to justify their actions. He created the concept of the Open Seas, stating they were free and no nation could control them (which the Portuguese had been doing).

DeGroot however carried on and wrote international law. This created many concepts about juries and laws that a Frenchman, Blaise Pascal used to develop a system that explained how juries would act. This caused trouble. His thoughts on probability were frowned on by the church which was not a good thing in those days. He became associated with a freedom of consciousness group, the Jansenists. The Church in France attacked them seriously. They had to flee, hide or die.

One way Jansenists hid was in monasteries where they pledged silence and could only communicate with hand signals. One French Jansenist monk, Lipet, started a sign language school that became so successful it eventually gained endorsement by the Pope.

Then a rich American, Samuel Morse’s partner, Amos Kendall, became interested and gave enough money to start Gallaudet College, the first university to give degrees to deaf students. At this college a Scottish elocution teacher learned that he could teach deaf people to make sounds using this sign language. While this Scotsman’s son was teaching sign language to deaf people in Boston, he came across a French invention that allowed deaf people to speak down a horn. This caused a membrane to vibrate and traced a wiggly line on smoked glass, allowing the deaf to see the wave created by the sound!

The son suddenly had another idea. If one could speak down a horn and get a metal membrane to vibrate a bit of iron in and out of a copper coil attached to a battery, could it be possible to generate a wavy bit of electricity that would go down a line? This concept he dared would cause the reverse to happen at the other end and reproduce the original sound.

This son’s name, of course, was Alexander Graham Bell and these thoughts created the telephone!

You can see in this way non-linear dynamics and those Dutch pirates created the telephone dramatically altering our lifestyles today.

But the pirate raid does not end its influence there. Those wiggly lines on smoked glass were turned into another phonetic code called shorthand by a devoted pacifist, Issac Pittman. He tried to use his phonetic shorthand as a universal language to improve global communication and understanding. The idea created such a wave of enthusiasm that some governments gave grants for scientific studies of the idea.

One grant led to research studied by a fellow named Reynolds, who took this information and worked out formulas known as “Plates Reynolds Numbers”. These numbers were deeply studied by two brothers who ran a bicycle shop in North Carolina. Their names? Orville and Wilbur Wright. They used “Plates Reynolds Numbers” to fashion their airplane which was the first in flight.

That’s non-linear dynamics! This is why we need intuition to assure our wealth. Things do and will change in ways we cannot logically figure out. Yet we can indeed know and feel what is coming through our intuition.

Could our logic have told us in 1604 that a Dutch pirate raid would lead to the telephone and airplane? Probably not, but our intuition is connected to everything and it could have led us to know what was coming next.

This is the real way that opportunity expands when you start and unleash this awesome universal power of chaos by taking action. Whatever you have been thinking about, start now.

#2: How to have your own international micro business.

4: How to live better in Smalltown USA.

#5: How to gain better health in natural ways.

Bob is a space scientist who has been involved at the quantum scientific level of the  aerospace industry for his entire career.   His studies in quantum physics helped him apply space science to understanding the deepest levels of balance in health.  Besides being the first person we turn to when we have health questions or concerns, he and his wife have been our very best friends for almost two decades.  He has helped Merri and me with our health enumerable times  over these years.

She established two yoga courses based on Hatha, Kundalini and Tibetan Yogas at Elon University in the Performing Arts Department  where she now teaches. Her master teachers of Hatha and Kundalini  Yoga were Dharma Mittra and Yogi Bhajan respectively.

← Micro Business and War Save the Birds →