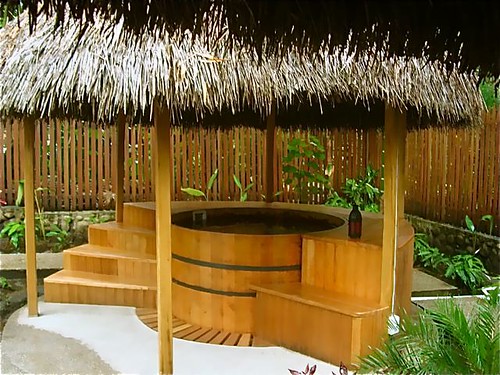 Spas are a great way to… 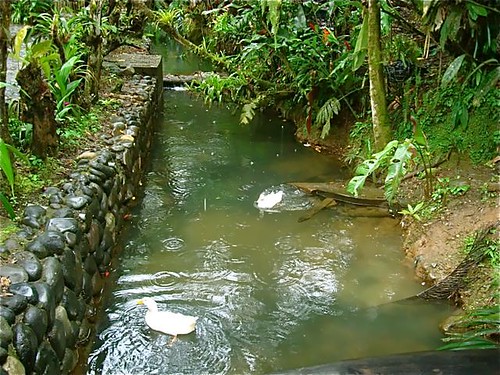 reduce stress. Jean Marie Butterlin who conducts our Ecuador Super Spanish… and Shamanic programs is visiting many spas with his wife, 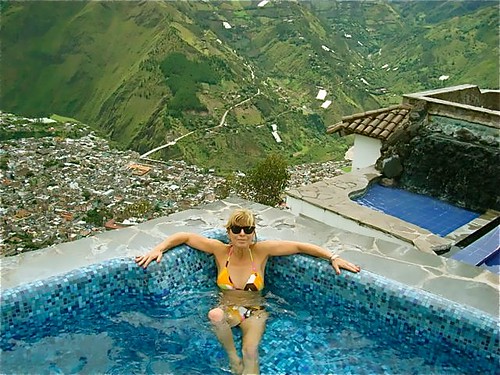 Pascale. Here they are at a spa in Puyo, Ecuador. A report on Ecuador spas comes soon.  Jean Marie and his family left a much more stressful life and careers in France and Spain and now live in Ecuador, researching, writing and discovering their new path.  He is centering now on finding business opportunities all over Ecuador.

Reducing stress is important. In 42 years of advising readers on global investing and business… my experience is that that most losses and most opportunities missed are due to bad decisions… not lack of information.  Stress leads to bad decisions.

A science daily article entitled Stress Hinders Rats’ Decision-Making Abilities shows how much the effect may be. Here is an excerpt.

ScienceDaily (Nov. 21, 2008) — A little bit of stress goes a long way and can have far-reaching effects. Neuroscientists from the University of Washington have found that a single exposure to uncontrollable stress impairs decision making in rats for several days, making them unable to reliably seek out the larger of two rewards.

We do not have to live on a rat race of stress either.

Another article on May 18, 2010 entitled “Daily stress and worry plummet after age 50” in USA Today By Sharon Jayson gives us a clue.

An excerpt says:  After 50, daily stress and worry take a dive and daily happiness increases, according to an analysis of more than 340,000 adults questioned about the emotions they experienced “yesterday.”

The research, published online today in the journal Proceedings of the National Academy of Sciences, shows that young adults experience more negative emotions more frequently than those who are older. Negative emotions, such as stress and anger, are similar in that they consistently decline with age, but worry holds steady until around 50, when it sharply drops, the study shows.

There are many ways to reduce stress.

Stress Buster #1: Exercise. Here is an excerpt from the Mayo Clinic article “Exercise: Rev up your routine to reduce stress”
Physical activity — whether it’s a relaxing walk, bicycle racing or meditative tai chi — helps relieve stress.  By Mayo Clinic staff
By now, you should know that exercise does your body good. But did you also know that virtually any form of exercise can decrease the production of stress hormones and counteract your body’s natural stress response? It’s true. The same regular exercise routine that helps prevent disease and builds muscle can also help you better manage stress.

Stress Buster #2: Listen to Baroque Music. One chapter in a study at Weber University in Utah entitled “Stress and the Environment” says: The Effects of Music.  Even though the term music therapy is fairly new, the practice of using music to heal can be traced back to antiquity. The healing power of music therapy is even recorded in the Bible: “And whenever the evil spirit from God was upon Saul, David took the lyre and played it with his hand; so Saul was refreshed, and was well, and the evil spirit departed from him.” (1 Samuel, 16:23).

Another interesting example, in our earlier history is written about the Russian Envoy Count Kayserling. The Count suffered with miserable insomnia. To deal with the problem, he asked Johann Goldberg, a local musician to play for him at night. Goldberg seized his harpsichord and played a piece of music written especially for the Count by Johann Sebastian Bach. The Count had informed Bach about his terrible problems with sleeplessness. He asked Bach to compose some music that might help him relax and get to sleep.

Soon Goldberg was playing the music that Bach had composed for the Count’s problem every time the count was having one of his sleepless nights. The Count had Goldberg installed in a room nearby ready to play at the Count’s beckon call. The Count was so happy with the positive effects of this music that he gave Bach a lavish gift of gold. We know this relaxing composition by Bach today as the Goldberg Variations.

Music therapy has been used throughout history as a way of coping with difficult situations. One such example is that of the people who were forced into Auschwitz, a Nazi concentration camp during World War II. People being separated from family and friends, being forced into slave labor, watching many people around them executed and waiting for their turn to die created an extremely stressful situation. The people in these camps seemed to have little to live for, yet many remained strong, and endured the trial. When asked what kept them going many would respond that music was one source of strength. It seemed to bind the prisoners together. There is a story of a group that was in the changing room for the gas chamber, and they were heard singing the Czechoslovakian national anthem and then a Hebrew song, “Hatikvah,” as a way to give each other strength for what was ahead of them. Music was a way for them to find peace, even in war and death.

Don Campbell, teacher and researcher in the fields of music, sound, health, and learning and founder and former director of the Institute for Music, Health, and Education in Boulder, Colorado writes of others throughout history who have shown evidence of the importance and power of music:

•    Early Greeks thought there was a clear connection between music and mathematics. Over the entrance to Plato’s Academy at Athens there was an inscription that could be translated: “No one may enter who does not know earth’s rhythm.” . . . in the belief that what held all things together was music.

•    Hindus believe there is a seed sound at the heart of creation, the Nada Braham, the tone from which God made the world, “which continues to sound at the bottom of creation, and which sounds through everything.”

•    A passage in the Tibetan Book of the Dead describes the essence of reality as “reverberating like a thousand distant thunders.”

•    Pythagoras asserted in the fifth century B.C. that, “There is geometry in the humming of the strings. There is music in the spacings of the spheres.”

•    Plotinus: “All music, based upon melody and rhythm, is the earthly representative of heavenly music.”

•    Lao-tzu spoke of the Great Tone that is “the tone that goes beyond all unusual imagination.”

•    Ancient writings are filled with testimonies to music’s power to perform miracles of healing or transformation, whether in ancient Greece or Rome, in the Bible, or other ancient texts.

•    Rumi, thirteenth century Islamic master, wrote:  We have heard these melodies in Paradise;  But while we are thus shrouded by gross earthly veils,  How can the tones of the dancing spheres reach us?”

•    To get in touch with music that allows access to the unconscious and inner depths, one must listen to the masterpieces of baroque, classical, romantic and impressionist composers who have encoded many of their works with messages of divine inspiration and unity. Great compositions offer those who listen, keys to personal transformation and the understanding of wholeness.

David Tame, another musicologist, spoke of music in his book the Secret Power of Music in these ways:  To the question, “Does music affect man’s physical body?” modern research replies in the clear affirmative. There is scarcely a single function of the body that cannot be affected by musical tones. The roots of the auditory nerves are more widely distributed and possess more extensive connections than those of any other nerves in the body. Investigation has shown that music affects digestion, internal secretions, circulation, nutrition and respiration. Even the neural networks of the brain have been found to be sensitive to harmonic principles.

Music affects the body in two distinct ways: directly, as the effect of sound upon the cells and organs, and indirectly, by affecting the emotions, which then in turn influence numerous bodily processes.

Stress Buster #3: Do what you love: Yet it turns out that part of the reason that those over 50 have reduced stress is they become more willing to take on new occupations.  To see more on why this is important click here.

This is one reason we have a special offer for five more days on our courses that can help you create your own micro businesses.

Learn how our quantum wealth sessions in North Carolina can help reduce stress.

Exercise: Rev up your routine to reduce stress

Stress and the Environment