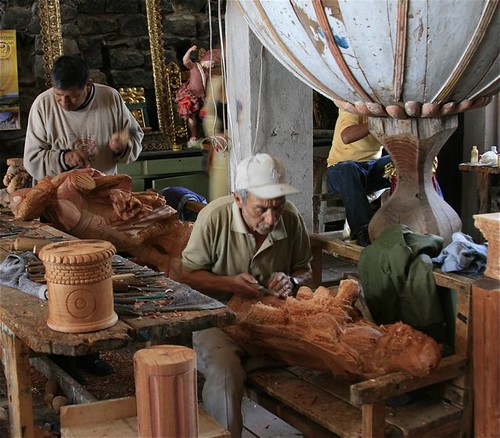 Here are wood carvers in the village of San Antonio de Ibarra, Ecuador.   Our Ecuador export courses help many delegates learn how to earn new forms of income and overcome glass ceilings.

Now there is a new form of glass ceiling growing in the air.

If you are a guy, super thinking and Spanish grows in importance is a reverse glass ceiling that is looming according to the USA TODAY article entitled “College gender gap widens: 57% are women” by Mary Beth Marklein.

Here is an excerpt:  In May, the Minnesota Office of Higher Education posted the inevitable culmination of a trend: Last year for the first time, women earned more than half the degrees granted statewide in every category, be it associate, bachelor, master, doctoral or professional.

Women currently make up 57% of all college students.

The article points out that as women progress, more boys are falling by the wayside.

National statistics also forecast a continued decline in the percentage of males on college campuses.

The article continues: There are more men than women ages 18-24 in the USA — 15 million vs. 14.2 million, according to a Census Bureau estimate last year. But nationally, the male/female ratio on campus today is 43/57, a reversal from the late 1960s and well beyond the nearly even splits of the mid-1970s.


Today, though, the blue-collar jobs that once attracted male high school graduates are drying up. More boys are dropping out of high school and out of college. And as the gender gap widens, concern about the educational aspirations of young men appears to be gaining traction, albeit cautiously.

One reason behind this shift is that technology has made the ability to communicate of growing importance and women are better at communicating than men.

A Daily mail article entitled “Women talk three times as much as men, says study” by Fiona Macrae touches on tbhis subject. Here is an excerpt from that article”

It is something one half of the population has long suspected – and the other half always vocally denied. Women really do talk more than men.

In fact, women talk almost three times as much as men, with the average woman chalking up 20,000 words in a day – 13,000 more than the average man.

Women also speak more quickly, devote more brainpower to chit-chat – and actually get a buzz out of hearing their own voices, a new book suggests.

The book – written by a female psychiatrist – says that inherent differences between the male and female brain explain why women are naturally more talkative than men.

And, if that wasn’t enough, the simple act of talking triggers a flood of brain chemicals which give women a rush similar to that felt by heroin addicts when they get a high.

Dr Brizendine, a self-proclaimed feminist, says the differences can be traced back to the womb, where the sex hormone testosterone moulds the developing male brain.

The areas responsible for communication, emotion and memory are all pared back the unborn baby boy.

The result is that boys – and men – chat less than their female counterparts and struggle to express their emotions to the same extent.

“Women have an eight-lane superhighway for processing emotion, while men have a small country road,” said Dr Brizendine, who runs a female “mood and hormone” clinic in San Francisco.

A second reason to think more effectively and speak some Spanish is because technological advances and expansion of the global economy in our modern society increases the value placed on the ability to communicate and remember in more than one culture.


This is why it becomes increasingly important for both men and women to improve their ability to absorb, retain and recall information.

This is why we have expanded the quantum… super thinking focus in our International investing and business courses.

This is why we are also expanding our Super Thinking Plus Spanish courses.

Spanish has always been an important language in the US.

In fact Spanish was the official language of the first permanent European settlers in North America,  St. Augustine, Florida, the oldest US city.

Today an increased number of  Spanish-speaking immigrants makes them the majorities in many areas, especially in California, Arizona, New Mexico, and Texas.

Almost 500 million people speak Spanish worldwide. It is the world’s second most spoken language, behind  Mandarin Chines in terms of native speakers and is the official language in in 21 countries.

Hispanic consumers are the fastest-growing market segment in North America.

Spanish is the second most used language in international communication.

The third reason to think more effectively and speak some Spanish is because it can help you survive and prosper in difficult times.

An excerpt  from the recent New York Times article,  “The New Poor – Millions of Unemployed Face Years Without Jobs” by Peter S. Goodman outlines the risk:   Even as the American economy shows tentative signs of a rebound, the human toll of the recession continues to mount, with millions of Americans remaining out of work, out of savings and nearing the end of their unemployment benefits.

“There are no bad jobs now. Any job is a good job,” said Jean Eisen, who became unemployed more than two years ago.

Economists fear that the nascent recovery will leave more people behind than in past recessions, failing to create jobs in sufficient numbers to absorb the record-setting ranks of the long-term unemployed.

Call them the new poor: people long accustomed to the comforts of middle-class life who are now relying on public assistance for the first time in their lives — potentially for years to come.


Yet the social safety net is already showing severe strains. Roughly 2.7 million jobless people will lose their unemployment check before the end of April unless Congress approves the Obama administration’s proposal to extend the payments, according to the Labor Department.


Men have suffered the largest numbers of job losses in this recession. But  — women from 45 to 64 years of age — long-term unemployment rate has grown rapidly.  In 1983, after a deep recession, women in that range made up only 7 percent of those who had been out of work for six months or longer, according to the Labor Department. Last year, they made up 14 percent.

Every downturn pushes some people out of the middle class before the economy resumes expanding. Most recover. Many prosper. But some economists worry that this time could be different. An unusual constellation of forces — some embedded in the modern-day economy, others unique to this wrenching recession — might make it especially difficult for those out of work to find their way back to their middle-class lives.

Learn more about our upcoming Super Thinking Plus Spanish.

Or travel with our Ecuador Living’s staff in Ecuador in March 2010. 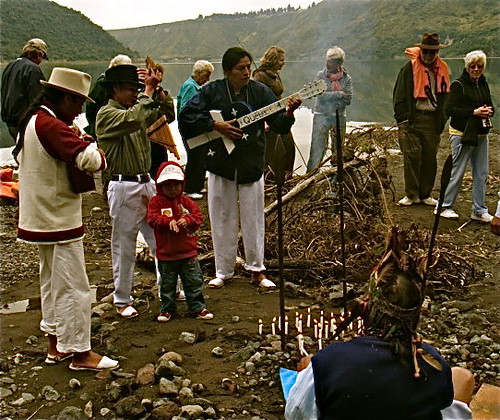 Women talk three times as much as men, says study