Yesterday’s message Multi Currency Risk explains why the US dollar’s downside is one reason to be in Ecuador.

In a federal budget filled with mind-boggling statistics, two numbers stand out as particularly stunning, for the way they may change American politics and American power.

The first is the projected deficit in the coming year, nearly 11 percent of the country’s entire economic output. That is not unprecedented: During the Civil War, World War I and World War II, the United States ran soaring deficits, but usually with the expectation that they would come back down once peace was restored and war spending abated.


But the second number, buried deeper in the budget’s projections, is the one that really commands attention: By President Obama’s own optimistic projections, American deficits will not return to what are widely considered sustainable levels over the next 10 years. In fact, in 2019 and 2020 — years after Mr. Obama has left the political scene, even if he serves two terms — they start rising again sharply, to more than 5 percent of gross domestic product. His budget draws a picture of a nation that like many American homeowners simply cannot get above water.


For Mr. Obama and his successors, the effect of those projections is clear: Unless miraculous growth, or miraculous political compromises, creates some unforeseen change over the next decade, there is virtually no room for new domestic initiatives for Mr. Obama or his successors. Beyond that lies the possibility that the United States could begin to suffer the same disease that has afflicted Japan over the past decade. As debt grew more rapidly than income, that country’s influence around the world eroded.

In the past the spending power from US… the biggest economy in the world… has been the engine that pulled global expansion along.

This may change.  Americans spent too much on the wrong things and… worst of all… taught the rest of the world to do so as well.

Overwhelming government debt worldwide puts the global currency system at risk. This suggests that America may stop being such a contributing factor to the social and economic evolution as we have known it.

The shifts in lifestyle that come from this shift lead many Americans to move abroad to simpler places… with lower cost lifestyles… like Ecuador.

One can look at all the bad possibilities that could develop in Latin America.  Yet there are plenty of potential bad scenarios for North America as well.

Whichever choice you make… to remain where you live… or head south… or east… west or north (don’t forget that Bobby Fisher chose Iceland)  expect change… inflation… a falling US dollar and global currency instability.

The charts from finance.yahoo.com show the currency instability graphically.

Here is the US dollar rising once again versus the euro. 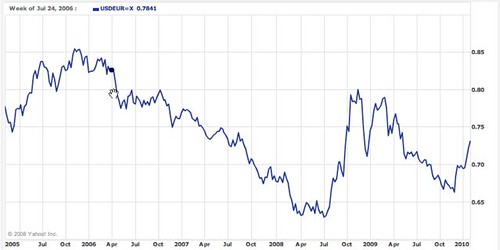 The charts for the other euro currencies, including the Swiss franc show the same trend.

This pattern is illogical if one looks at the long term fundamentals, but the investment community has used the government induced liquidity to leverage investments. Now as worries return in the market those who are short the US dollar are selling other currencies to cover positions. This is pushing the dollar up. 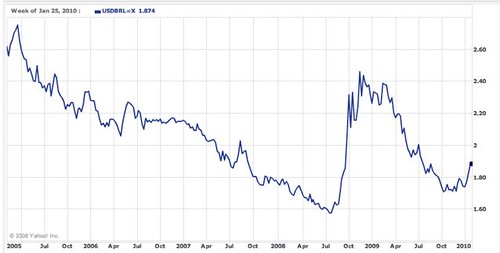 in Asia where the dollar is up against the Singapore dollar as well.

The dollar currencies, Canada (chart below) Australia and New Zealand have also lost ground to the greenback. 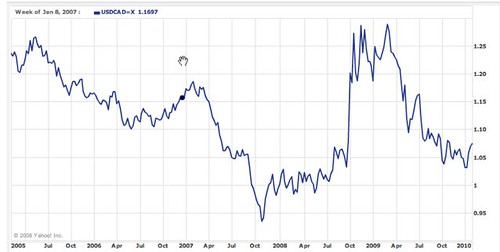 The only currency with strength versus the US dollar remains the Japanese yen. 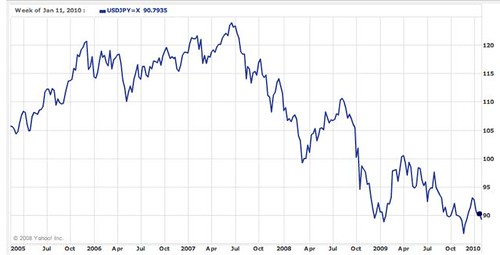 This who have borrowed yen are hurt the most.

Dollar borrowers  (me included) have lost short term and the most profitable loans in the short term have been in the Swiss franc and euro.

This global volatility rewrites the old rules. In the last world, I would keep my US dollar loan and ride though these up and downs staying short of the buck and stick to just a long term view.

As mentioned yesterday I set a stop loss and when it was reached took my loss. My leverage loan is in euro now.

The altered state of global currencies forces us to trade short term… at least a bit.

Yet at this crucial time when the US dollar has great fundamental weakness, US banks have little experience in helping its clients invest in other currencies.

This means there will be an increase in the number of American who develop multi currency portfolios and global businesses.

Jyske Bank has stayed with us yanks and formed Jyske Global Asset Management. They spent millions creating a system that can give US investors a full currency and global investment service in the US, Ecuador or wherever they live.  This is why I will  be speaking at Jyske Global Asset Managers forex seminar in Laguna Beach this April . See details here.

Or Join Merri and me or Ecuador Living’s staff in Ecuador in March 2010.