Ecuador is a land of volcanoes and geological faults so Ecuador does have earthquakes. Here is an excerpt from a full report just emailed to our Ecuador Living subscribers.

The recent earthquake in Haiti sent many readers scuttling to their keyboards so they could ask about earthquakes in Ecuador.

“Since Ecuador is obviously in a earthquake zone, how many of the buildings you have recommended or mentioned over time are built to earthquake standards? It seems you never mention anything concerning this, or if you have not very often. This is putting people in possible severe danger if they are buying into a condo or home without making them aware of this very important point. Cheaper structures mean very little if a person has to risk their life in that earthquake known region.”

Another sent this missive:

Having been to Ecuador I know that Ecuador is earthquake country.  Given what’s happening now in Haiti when I read about high rise building in Ecuador I wonder what the construction is.  Is the potential for earthquakes taken into consideration re: construction?  It might interest folks considering living in Ecuador or investing there – perhaps a good topic for one of your great emails.  It would certainly interest me! Thanks!

Ask and you shall receive… so I have listed some Ecuador earthquake facts below.

We do take care to live in a healthy way.   Earthquakes are not especially healthy… but after thinking about this my conclusion is that it is cities are a bigger risk than earthquakes.   Earthquakes do not scare me.  Cities do.

This is one reason that Merri and I live in the country everywhere… Florida… North Carolina and Ecuador. Cities are more dangerous places than countrysides…  during earthquakes…  hurricanes…simply driving in traffic… or even taking a breath.

This appears to really be the case with earthquakes!

An excerpt from a  report by Geohazards International entitled Vulnerable Communities points this out when it says:

If earthquakes terrify you, then you may want to avoid Ecuador and the entire ring of fire.

The US Geological survey glossary describes the Ring of Fire:  The “Ring of Fire”, also called the Circum-Pacific belt, is the zone of earthquakes surrounding the Pacific Ocean — about 90% of the world’s earthquakes occur there. The next most seismic region (5-6% of earthquakes) is the Alpide belt (extends from Mediterranean region, eastward through Turkey, Iran, and northern India. 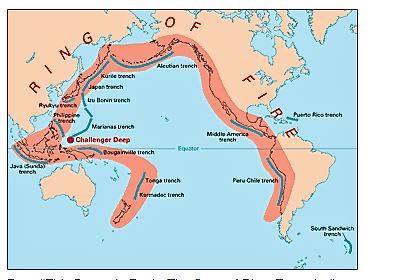 If, however, you are like me… there is too much there to let the fear of earthquakes stop me… being in Oregon… California… Ecuador.

So the question is… are there places to avoid?

San Francisco de Quito, most often called Quito, is the capital city of Ecuador in northwestern South America. It is located in north-central Ecuador in the Guayllabamba river basin, on the eastern slopes of Pichincha,[1] an active stratovolcano in the Andes mountains.


The largest eruption occurred in 1660 when more than 10 inches (25 cm) of ash covered the city.[8] There were three minor eruptions in the 1800s. The latest eruption was recorded on August 23, 2006, when a few puffs of smoke and a large amount of ash were deposited on the city. Although not devastating, the eruption caused significant disruption of activities, including closing of the international airport. It is unlikely that any serious activity will occur in the near future, and the topography of the volcano is such that, even if a major eruption were to occur, lava flows would head into the almost-unpopulated areas west of the volcano, sparing Quito, which lies to the east.

Quito, Ecuador, the site of many powerful earthquakes through the years, suffers one of its worst when a tremor kills 5,000 people and destroys some of the most famous buildings in South America, on this day in 1859.

Quito’s history of earthquakes in modern times began with a monster tremor on February 4, 1797. Not only did an estimated 40,000 people in the city perish, but the quake activated the Cotopaxi volcano. This led, in turn, to lava raining down on the town of Ambato. Sixty years later, Quito had been rebuilt and little was remembered about the devastating quake of 1797.

But, at 8:30 a.m. on March 22, nearly six full minutes of violent shaking struck the city. Buildings, churches and homes throughout the city were demolished by the tremor. Some of the area’s most prominent buildings collapsed, including the Government Palace, the Archepiscopal Palace, the Chapel of El Sagrario and the Temple of the Augustines. Despite the loss of so many structures, the death toll was not as high as it could have been. Coming at 8:30 in the morning, the quake was just late enough that most of the residents had left their homes, where they would have been most vulnerable.

Following this disaster, Quito was not hit again by a major earthquake until August 1949, when a tremor south of the city killed 6,000 and left 100,000 people homeless.

So does one avoid Quito?  That of course is your choice, but not me. There is too much I like about this city to let such a minimal risk thwart my desires.


How about avoiding tall buildings in Quito?

We don’t plan to live in a tall building anywhere…but we still love many parts of Quito.

One of my favorite places in Quito is Techo del Mundo, a restaurant on the top floor of Hotel Quito… an old 13 story building. The restaurant has great panoramic views of Quito in all directions. 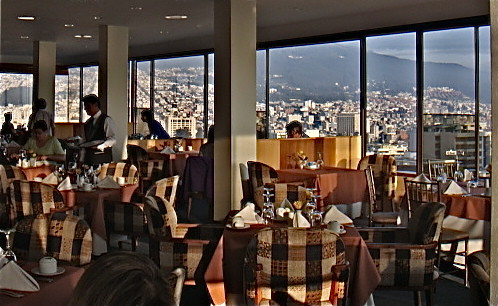 The restaurant has great panoramic views of Quito. 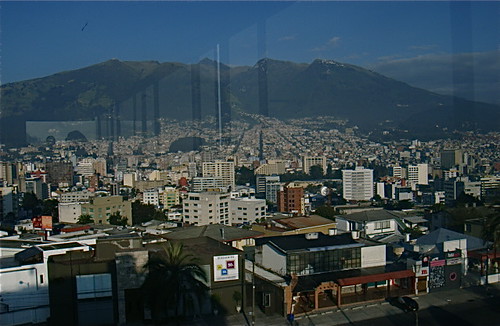 Breakfast at Techo del Mundo is one of my favorite meals and earthquake worries will not stop me from going there.
Are Ecuador skyscrapers safe?
Ecuador is no Haiti.  Inexperienced travelers, especially those who have never visited Ecuador might divide the world into two categories… developed and developing.  Such thinking creates a distorted view. There are many categories of developing countries and Ecuador falls into a much higher category and has high standards of construction and numerous construction safeguards.
My Ecuador attorney wrote:  By reviewing legal issues relating to construction in Ecuador and after talking with several architects, I found that there are no specific legal requirements, but rather very high technical standards for structural design of buildings which have to be approved by the planning departments in the municipalities prior to obtain the construction permits. They have several categories of earthquake resistance buildings thus they (municipalities) demand higher structural safety according to the use of the building: hospitals, schools, church, etc.

Geohazrad International reports:  In September 1992, an eighteen-month project began to assess the earthquake hazard and risk to Quito, and, using earthquake scenarios, to design sustainable programs to mitigate that risk.

A multi-national group of seismologists, geologists, soils engineers, structural engineers and city planners developed, assembled and analyzed the technical data. This enabled them to estimate three likely future earthquake events in Ecuador, including distribution of earthquake damage in Quito.

This information was then used to design an earthquake scenario. Vividly written in non-technical language, the scenario raised public awareness of the earthquake threat and motivated government, business and community leaders to develop mitigation projects.

A group of international and Ecuadorian specialists from business and industry, city government, urban planning, emergency services and infrastructure then developed recommendations within their fields of expertise for reducing earthquake risk in Quito.


•    An Earthquake Safety Advisory Board was established to develop, implement, monitor and regularly update a comprehensive earthquake risk reduction program for Quito. 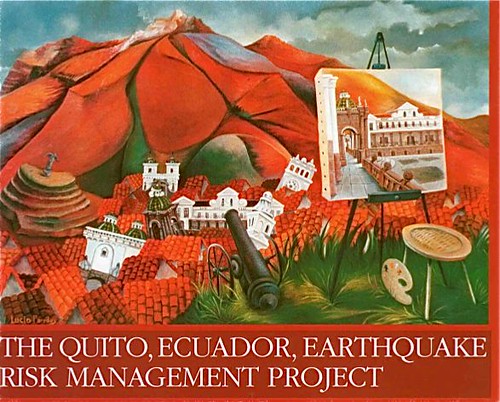 There have been other parts of Ecuador that have suffered earthquakes. You can learn about them and their codes in our full Ecuador Living Report. Learn how to subscribe here.

I have asked contacts around Ecuador to share more on what they know.

Angel Proano who is developing the Falconi homes development in Cotacachi wrote:

Dear Gary,  We are very saddened by what happened in Haiti, but it is important to inform the people coming to live in Ecuador, that in an emergency they should always make good decisions before buying a property.

Builders must take precautions before making a condo or a house, but unfortunately many of them save money by not buying the best quality materials, or constructed with the technique well suited.


The adobe building is very dangerous in case of earthquakes, also built in a loose soil, or too humid can cause cracks in the house.


Patricio Falconi knows that Ecuador is a country that is not free from earthquakes like the rest of the world is that it uses the best construction techniques as the foundation stone, iron chains at the bases of walls and other chains that melt into the walls before putting the roof. (attached sent photos as an example).


The combination of wood and brick with iron is the best building in an earthquake, our houses are very safe.


Also in the town have organized a group of emergency, to be prepared in case of danger. This group has the backing of government, the ministry of health, fire, police and local authority.  Kind Regards,  Angel Proaño

A close friend in Guayaquil wrote: “Gary,  Guayaquil has minor tremors compared to Quito but there are safety standards in all modern buildings.”

Carlos Tobar who is looking after our Quito tours wrote:  “I do not know the codes off the the top of my head but will find out more and let you know on Monday.”

Kjetil Haugan who built Palmazul and Vistazul wrote: “I know that our project is built with earthquakes in mind and the walls are almost the double the size of of normal walls but I am not sure if this is an requirement.  I’ll let you know more next week.”

I am updating Ecuador Living subscribers as replies come in.


The main reasons for choosing the areas where we live… The Blue Ridge,  Ecuador and Mt. Dora Florida… is we like the people… and the land.  Yet we gain  extra comfort from being out of cities.

Your comfort is the key as well.   Your chances of being hurt in an earthquake… hurricane, tornado… flood… an airplane crash… rattlesnake bite or being struck by lightning… are so statistically low that you should be sure to do what you love first… exercise caution against natural disasters, second.Wherever you are we hope your tsunami’s are of success and hurricanes of fulfilling activity… because it’s natural to have abundance instead of disaster.

Join us at a seminar or tour to share ways to invest, do business and live that protect as they provide joy, satisfaction, better health and enhanced wealth.


There is one week left to gain the largest savings on our Ecuador tours.