Here is an Ecuador travel tip for those who plan to visit the high altitudes in the Andes. Drink Canella a High Altitude Tea (cinnamon) panella (unrefined cane sugar) tea when in Quito and at other high Andean altitudes. This is a shamanic tip we share with all our readers who visit the Andes.  This tea helps combat altitude problems.

This is a simple remedy for altitude sickness.  An alternative is to drink cinnamon and honey.

Cinnamon and honey.  These two ingredients are used by the shamans in so many ways (they are great bee keepers).

Here is a purification formula we learned from a Shaman who lived high in the Andes. Though the village where he lived had no running water, the locals always glowed and their skin looked fresh and clean. I questioned their secret and this is what they said. This cleansing is delightful and works inside and out!

Boil them thoroughly in a couple quarts of water. Set aside a cup or two to drink. Dilute the balance in three to five gallons of water as hot as you can stand. Get in a bathtub or shower. Sit in a meditative pose, relax and slowly ladle cup after cup over your head and entire body. When through, do not rinse or towel dry. Let your hair and body dry naturally. You’ll feel clean with a warm glow, smell like apple pie and your skin and hair will shine!

Enjoy drinking this tea as much and often as you like as well. This is a sweet, gentle secret that you can enjoy anytime, anywhere.

Shamans in the Amazon use cinnamon as well. La Mirage is a Relais and Chateaux spa, our favorite has an Cofan Amazon Treatment inspired by the indigenous inhabitants of Ecuador’s Amazon and their use of native plants of the rain forest. 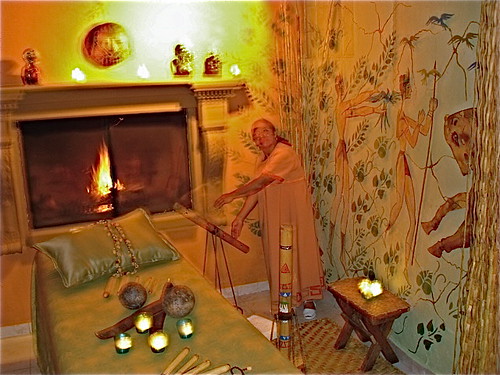 The Amazon room filled with antiques and with its own fireplace.

“First you enjoy a tub infused with guayusa and ishpingo (cinnamon) leaves, both plants found only in the Amazon.  Ishpingo is the Quechua word for the native Ecuadorian “Cinnamon” tree Ocotea quixos (Lauraceae), found only in a small region of Amazonian Ecuador and Colombia. It is in the same family (Lauraceae) as the common Cinnamon and has a similar aroma. It has been used locally as a spice and flavoring agent since pre-European times.

These essences are known by the Amazon people for their stimulating qualities. They are used in their rituals to heal the inner organs.

The body is exfoliated with the guayusa and ishpingo leaves while in the tub.

The massage therapist awaits you for an immersion in the sacred plant oils … guayusa and ishpingo. 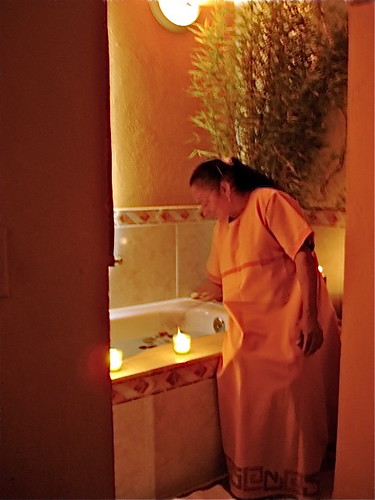 Ishpingo oil is an anti oxidant with antibacterial and antifungal activity.

The oils from these plants blend in the hot water to create a buttery, waxy feel…the aroma being akin to exotic cinnamon and spearmint … a delight that prepares and transports you into the deep forest feel. 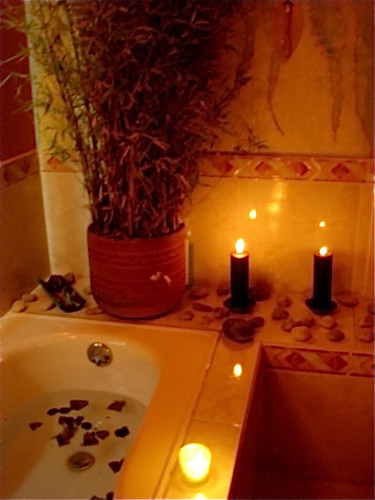 The oils create a stimulation … dream like quality, while they cleanse the body and skin.

Since the root of Ecuador indigenous language Quechua is Sanskrit, I was not surprised when our friend Blaine Watson recently sent this note in his daily email about Indian healing techniques with a warning  “don’t cook the honey.  You can melt honey in warm water but don’t cook it”.


Blaine wrote: Cinnamon and Honey
Honey is the only food on the planet that will not spoil or rot. It will do what some call turning to sugar. In reality honey is always honey. However, when left in a cool dark place for a long time it will do what I rather call “crystallizing”.   When this happens I loosen the lid, boil some water, and sit the honey container in the hot water, turn off the heat and let it liquefy. It is then as good as it ever was. Never boil honey or put it in a microwave. To do so will kill the enzymes in the honey.


Bet the drug companies won’t like this one getting around.  Facts on Honey and Cinnamon:  It is found that a mixture of honey and Cinnamon cures most diseases. Honey is produced in most of the countries of the world. Scientists of today also accept honey as a ‘Ram Ban’ (very effective) medicine for all kinds of diseases.  Honey can be used without any side effects for any kind of diseases.

Today’s science says that even though honey is sweet, if taken in the right dosage as a medicine, it does not harm diabetic patients.   Weekly World News, a magazine in Canada , in its issue dated 17 January,1995 has given the following list of diseases that can be cured by honey and cinnamon as researched by western scientists:


Make a paste of honey and cinnamon powder, apply on bread, instead of jelly and jam, and eat it regularly for breakfast. It reduces the cholesterol in the arteries and saves the patient from heart attack.  Also, those who have already had an attack, if they do this process daily, they are kept miles away from the next attack. Regular use of the above process relieves loss of breath and strengthens the heart beat.  In America and Canada , various nursing homes have treated patients successfully and have found that as you age, the arteries and veins lose their flexibility and get clogged; honey and cinnamon revitalize the arteries and veins.


Arthritis patients may take daily, morning and night, one cup of hot water with two spoons of honey and one small teaspoon of cinnamon powder. If taken regularly even chronic arthritis can be cured. In a recent research conducted at the Copenhagen University, it was found that when the doctors treated their patients with a mixture of one tablespoon Honey and half teaspoon Cinnamon powder before breakfast, they found that within a week, out of the 200 people so treated, practically 73 patients were totally relieved of pain, and within a month, mostly all the patients who could not walk or move around because of arthritis started walking without pain.

Take two tablespoons of cinnamon powder and one teaspoon of honey in a glass of lukewarm water and drink it. It destroys the germs in the bladder.


Two tablespoons of honey and three teaspoons of Cinnamon Powder mixed in 16 ounces of tea water, given to a cholesterol patient, was found to reduce the level of cholesterol in the blood by 10 percent within two hours.   As mentioned for arthritic patients, if taken three times a day, any chronic cholesterol is cured. According to information received in the said Journal, pure honey taken with food daily relieves complaints of cholesterol.


Those suffering from common or severe colds should take one tablespoon lukewarm honey with 1/4 spoon cinnamon powder daily for three days. This process will cure most chronic cough, cold, and clear the sinuses.


According to the studies done in India and Japan , it is revealed that if Honey is taken with cinnamon powder the stomach is relieved of gas.


Daily use of honey and cinnamon powder strengthens the immune system and protects the body from bacteria and viral attacks. Scientists have found that honey has various vitamins and iron in large amounts. Constant use of Honey strengthens the white blood corpuscles to fight bacterial and viral diseases.


Cinnamon powder sprinkled on two tablespoons of honey taken before food relieves acidity and digests the heaviest of meals.


A scientist in Spain has proved that honey contains a natural ‘ Ingredient’ which kills the influenza germs and saves the patient from flu.


Tea made with honey and cinnamon powder, when taken regularly, arrests the ravages of old age. Take four spoons of honey, one spoon of cinnamon powder, and three cups of water and boil to make like tea. Drink 1/4 cup, three to four times a day. It keeps the skin fresh and soft and arrests old age. Life spans also increase and even a 100 year old, starts performing the chores of a 20-year-old.


Three tablespoons of honey and one teaspoon of cinnamon powder paste. Apply this paste on the pimples before sleeping and wash it next morning with warm water. If done daily for two weeks, it removes pimples from the root.


Applying honey and cinnamon powder in equal parts on the affected parts cures eczema, ringworm and all types of skin infections.


Daily in the morning one half hour before breakfast on an empty stomach, and at night before sleeping, drink honey and cinnamon powder boiled in one cup of water. If taken regularly, it reduces the weight of even the most obese person. Also, drinking this mixture regularly does not allow the fat to accumulate in the body even though the person may eat a high calorie diet.


Recent research in Japan and Australia has revealed that advanced cancer of the stomach and bones have been cured successfully. Patients suffering from these kinds of cancer should daily take one tablespoon of honey with one teaspoon of cinnamon powder for one month three times a day.


Recent studies have shown that the sugar content of honey is more helpful rather than being detrimental to the strength of the body. Senior citizens, who take honey and cinnamon powder in equal parts, are more alert and flexible. Dr. Milton, who has done research, says that a half tablespoon of honey taken in a glass of water and sprinkled with cinnamon powder, taken daily after brushing and in the afternoon at about 3:00 P.M. when the vitality of the body starts to decrease, increases the vitality of the body within a week.


People of South America , first thing in the morning, gargle with one teaspoon of honey and cinnamon powder mixed in hot water, so their breath stays fresh throughout the day.


Daily morning and night honey and cinnamon powder, taken in equal parts restores hearing. Remember when we were kids? We had toast with real butter and cinnamon sprinkled on it!

Come to Ecuador for dental repair and to learn Spanish in three days.