The international investment drop yesterday, Friday October 30, 2009 confirmed the concerns reported in your recent updates beginning in your October 25, 2009 update which said:

“A value analysis of major markets suggests that they have far less profit potential now than they had at the beginning of the year.”

This was reinforced in the Triple Crunch Warning in your October 26, 2009 update that came just in time and said”  “I see three signals of caution in equity markets.  They could cause a market crunch”.

The US equity drop came Oct 30, 2009 just in time to reconfirm the extra risk in this transition month.

Jyske Global Asset Management (JGAM) followed up on this concern when they advised on October 30 2009:  “Please, fasten your seatbelts, there will be turbulence!”

JGAM wrote:  The week started with a mood change, as fear returned to the market resulting in a massive selling with financials stocks taking the worst beating. Tuesday did not bring relief when the confidence among U.S consumers in October unexpectedly fell beneath the critical 50 mark, making equities slide even further. From Monday to Wednesday the S&P500 Index fell 4.5%.

Norway’s central bank on Wednesday raised its benchmark interest rate by 25 basis points to 1.5%. The economy of the Scandinavian oil producer is picking up more rapidly than expected. A falling unemployment and higher inflation rate paved way for this “early” hike, only 4 month after the central bank cut its key rate with an equal 0.25 percentage points.

The positive sentiment returned Thursday, when data released on the US Gross Domestic Product indicated that the world’s largest economy had returned into growth in 3rd quarter. The US economy expanded 3.5% from July to September ending the yearlong contraction. On back of the better than expected 3Q US GDP figures the market turned on a dime, and in the hours after the release equities in e.g. Brazil surged by 6%.

On Friday, the Japanese Jobless rate surprisingly dropped to a four-month low, indicating that the recovery may be sustained, pulling the 2nd largest economy out of recession. Bank of Japan officials later stated that it will stop buying corporate debt at the end of the year. The central bank left its Benchmark rate unchanged at 0.1%.

Germany later released an unexpected drop in retail sales for September, as sales adjusted for inflation slipped 0.5%. The largest economy in Europe is predicted to grow 1.2% next year leaving a contraction of 5% this year.


We now know that on Friday October 30, 2009, U.S. stocks tumbled  with Bank of America, and financials leading the Dow Jones Industrial Average to its biggest one-day drop since April 20. This drop essentially wiped out all October gains in the Dow and the S&P 500 and Nasdaq Composite, ended the month with a drop, their first monthly declines since February.

The Dow had its 10th triple-digit movement this month, five up and five down.  This suggests great nervousness on the market.

Unless you are a professional trader with adequate reserves, this is not a time to make any short term speculations that stretch your liquidity. The warning to never leverage more than you can afford to lose is doubly important now.

This is a highly leveraged market and recent history suggests that we’ll see a drop in equities and a shift back to the US dollar.

This concept was also reinforced yesterday when gold and oil fell against the greenback.

Both commodities (gold & oil) were hurt in two ways.  Speculators quickly covered their US dollar loans, and moved away from inflationary speculation on deflationary reports that consumer spending fell sharply in September, while employment costs rose at the smallest annual rate on record in the third quarter, dimming gold’s appeal as a hedge against inflation.

Gold for December delivery dropped nearly $10 an ounce and oil was down to $77 a barrel about a 3.5% loss.

The chart below from WTRG.com shows how short term commodity speculation has peril. 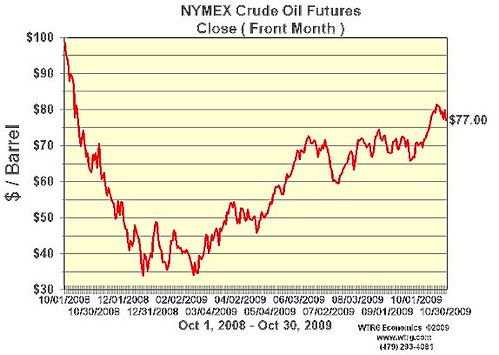 Gold and oil still remain up for October and it has surged more than 18% year to date… but if you have leveraged short term positions in either gold or oil… be very careful on Monday.


What to do now… this is the big question… along with what happens Monday.

Since there is a strong possibility that the greenback will rise… getting into the dollar is the worst thing to do.  The uptick of the buck will be a short term knee jerk reaction.

This could be an opportunity to unload the dollar.

A better investment is in something related to the US dollar… but in a better fundamental position.  This is why October 20, 2009, your update reported that:  I added Norwegian kroner,  Australian and New Zealand dollar and Mexican peso bonds and for the first time in two years borrowed 10% of my liquid portfolio to leverage these investments a bit.

Then your October 22, 20o9 message suggested: borrow the US dollar invest in Mexican pesos.

This chart from www.yahoo.finance.com shows why this has made sense.

Friday the US stock market dropped and the US dollar rose… but the dollar fell versus the Mexican peso. 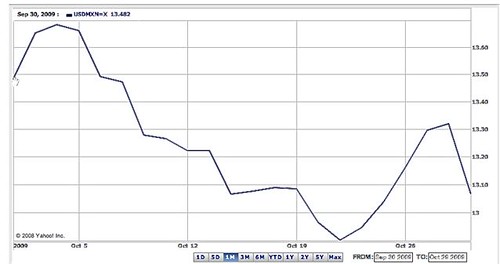 As outlined in that October 22 update. We are being paid a nice positive carry to take this risk.