Our belief in Ecuador, as a place to live and invest, comes in part because of its position in the seventh wave of the industrial revolution. 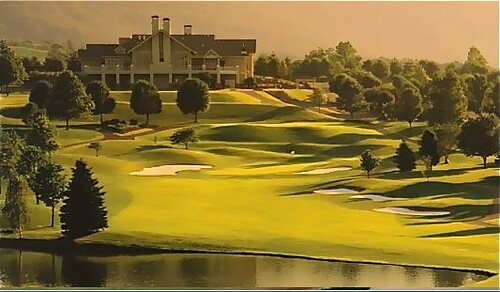 We reviewed cycles and seasons… how Ecuador opportunity and business in Ecuador really pick up at about this time of the year.  Ecuador’s up season is coming up.

Seasonality is a really important factor of investing to keep in mind… especially right now… as we will see below.

First, in that course we looked at the Asset Allocation of my portfolio and…

Why I have so little in the stock market now is due to cycles, seasonality and personal values.

Regarding seasonality, October is the bewitching month of  shares.

We viewed how, since the beginning of the Industrial Revolution, the western economy has been moving through fifteen-year upward and downward cycles.  We saw how we are in the tenth year of a potentially 15 year downward wave.

Since the 1800s the stock market has moved in 30 year waves, peaking in bubbles and ending in troughs. Technology, warfare and politics are all related to these cycles. The phrase that coined this great social economic transformation we call the “Industrial Revolution,”  according to historian David Landes, was first in a letter of 1799 written by French envoy Louis-Guillaume Otto.

Since that time mankind has enjoyed ten boom cycles… each created by new technology. Each boom has been followed by a bust… a bear market… a down wave that lasts about 15 years…. for 310 years.

So it is appropriate that in information era up wave  (the dotcom bubble) the Dow topped at 10,336  and then crashed Oct 1, 1999… 300 years after the first revolution began.

Here is a chart of the Dow in that 10th upward period from www.finance.yahoo.com. 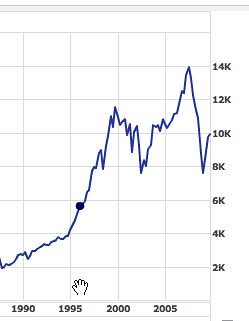 That crash began the current 15 year side ways model that marks the downward cycle.   The peaks and valleys, consistent with the downward wave has slaughtered many investors which, I explained at the course,  is why I have so few equities now.

Seasonality is why I  am not buying equities in October as well.

We viewed how seasonality was at work. Over 30 years the Dow has grown 8.16% overall but all of that growth and more (8.36% per annum average)  has come in the months of November through April. The average annual growth per annum over thirty years in May  to October is only 0.37%.

In other words… October is a volatile month for shares.  In fact the worst days of  the US stock market have been in October.

Black Thursday was October 24th in 1929. During that frenetic day nearly 13 million shares changed hands, nearly four times the norm.  Black Tuesday was October 29, 1929.   The market was slashed again leaving the Dow 40% down in that week. 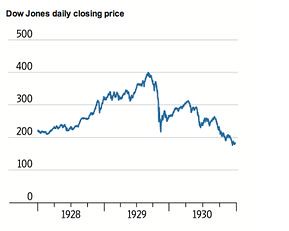 Black Monday  was October 19, 1987, global equity markets crashed, starting in Hong Kong. Panic rushed to Europe and then knocked the Dow Jones Industrial Average (DJIA) down 22.61%, its largest one day drop ever. 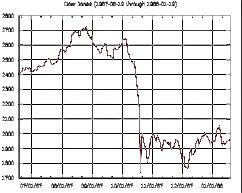 In short the good equity growth season is about to begin.

Seasonality studies give support to the current bear market recovery but suggest the support is best after October.

Plus watch out for a severe October market correction!

Thomas Fischer from Jyske Global Asset Management was with us and pointed out that JGAM’s  low risk portfolios have a very underweight position in equities as well.

During the course we also looked at the importance of personal values in investing by enjoying the process.

We saw some great autumnal beauty… 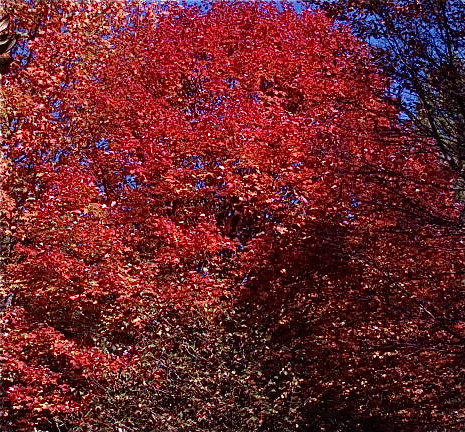 in the Blue Ridge during the course.  We walked some glorious paths. 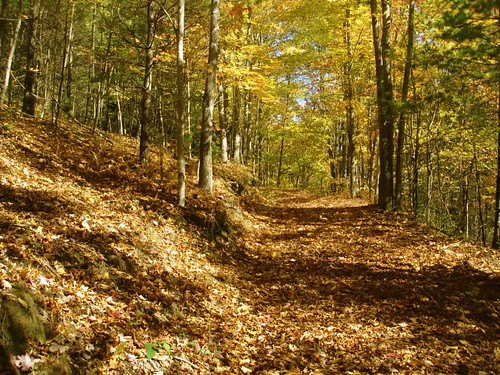 Yet this is an El Nino year… a cold winter is predicted.  A long one maybe.

El Niño and La Niña bring significant temperature fluctuations in surface waters of the tropical belt of the Pacific Ocean: an El Niño event sees a rise in temperatures and La Niña witnesses a drop in normal temperatures.

These temperature changes are strongly linked to major climate fluctuations around the world, especially in Latin America, Australia and East Asia, which can last for a whole year or more. Both El Niño and La Niña can disrupt the normal weather patterns and have widespread impacts on climate in many parts of the world.

The UN World Meteorological Organization (WMO) said today that sea-surface temperatures in the eastern equatorial Pacific had risen to between 0.5 and 1 degree Celsius warmer than normal by the end of June, with similar temperatures in July.

“Scientific assessments of these observations indicate that this warming resembles the early stages of an El Niño event,” the Geneva-based agency stated in a news release.

In its most recent update on the subject, WMO stated that the expectation is for El Niño conditions to very likely prevail through the remainder of 2009 and into the first quarter of 2010. 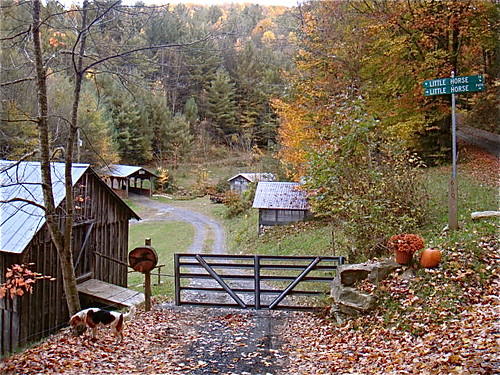 to this in November. 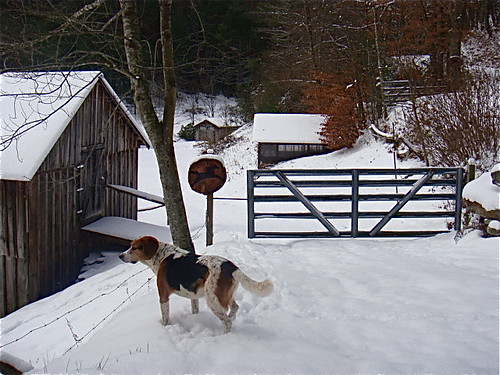 Here was the weather report yesterday Oct.14 2009 at Asheweather.com.  Rainy, cold, and raw about sums it up for today. High temperatures for the day were early this morning; We’ll slip into the lower 40s for the rest of the daytime as rather steady rain continues. Watch out for thick, dangerous fog along the Blue Ridge today through much of Thursday. And yeah, we weren’t kidding about that weekend snow shower thing. Gory details below.

Here are some weather statistics for our area that suggest what  happens in Southwest Virginia and Northwest North Carolina (where we are in the Blue Ridge) during an El Nino year.

Roanoke’s snowiest month on record was January 1966, with more than 41 inches. That was during an El Nino.

Roanoke’s coldest winter on record was that of 1977-78, which also had more than 37 inches of snow. That was during an El Nino.

Long term patterns in weather or stock markets are no guarantees… but by looking at the odds wouldn’t you rather invest in equities at a time that historically has shown the highest appreciation year after year.   And though snow and cold are not guaranteed up north, wouldn’t you rather have this in the dead of winter (Mt Imbabura) or… 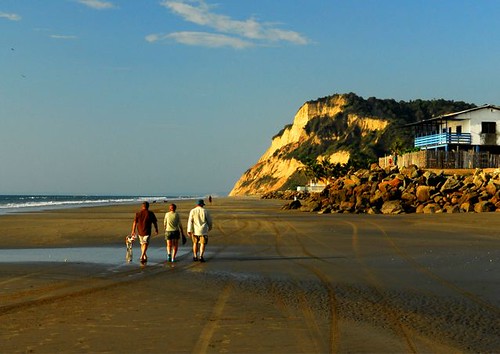 Ma, Merri and our friend Steve Hankins at our condos in San Clemente, Ecuador.

This is why we added three more courses and tours in December in our 2009 schedule and will have even more Ecuador courses in January though March 2010.

The remaining 2009 courses are below.

Join our Ecuador courses and tours October, November or December.

The greatest asset of all is the ability to labor at what you love wherever you live. This brings everlasting wealth.

This course can help you create your own internet business.

These two courses have sold for $398 and thousands have paid this price. We add them to your course, at no added cost, as I believe they will help you develop a better business in these crucial times..


To make this offer even more compelling,  I am giving everyone who enrolls in all our seminars or tours for any one month, October, November or December, “Tangled Web… How to Have an Internet Business Course,”  “Self Fulfilled- How to be a Self Publisher” and “International Business Made EZ” free. 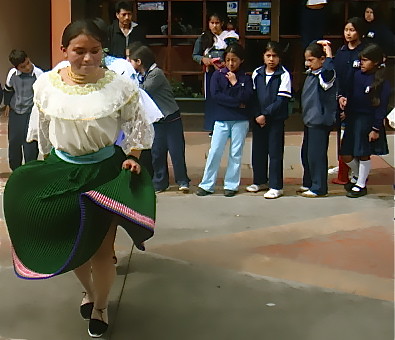 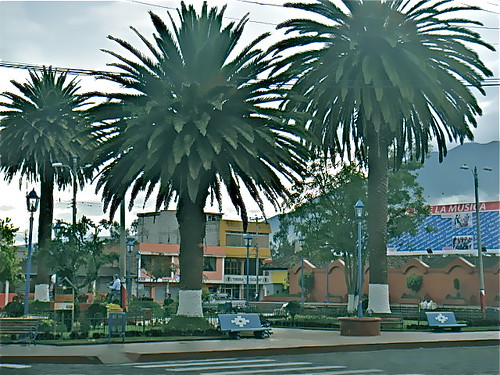 In Cotacachi the weather is always Spring like.  Here is the village plaza near our hotel Meson de las Flores. 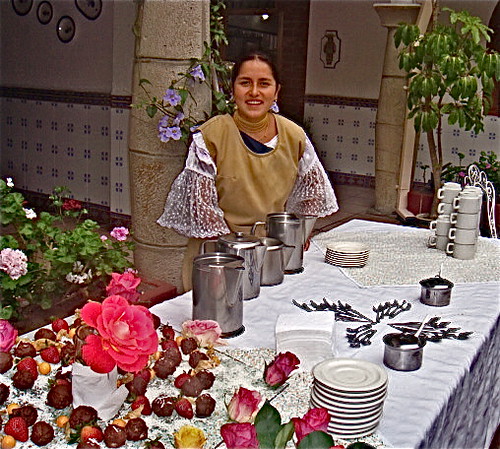 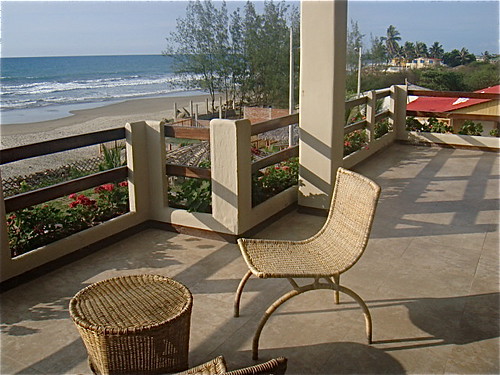 This shorts weather photo was taken from our beach penthouse in February.

Join us in the mountains and at the sea.  Attend more than one seminar and tour and save even more plus get the three emailed courses free.