What is the difference between health and wealth? Not much, just WH.   They are very connected. Without good health, wealth may not last long…  nor is wealth very important when health fails, except to regain health.

We can apply an idea about having better health through purification, to enhance our wealth.  We can improve our wealth by removing toxic investments from our portfolio.

In a moment we’ll also look at investing in sustainable timber and see an Ecuador visa update. 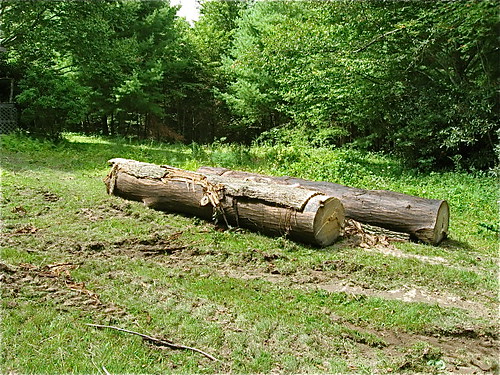 First, let me begin with a purification health tip.

The tip is in the summer eat a watermelon.  Many ancient healing traditions (including Andean) view the body as having several elements including water, fire and air. Imbalances of these elements reduces energy, vitality, even leads to illness. The seasons too contain elements of fire, water and air. Water is predominant in spring, fire in summer and air in autumn-winter. Our bodies tend to accumulate these predominances during the season. In winter we have air imbalances (leading to dry throat called colds). In spring we pick up too much water (runny noses we identify as allergies, etc.). So at the beginning of each new season, it’s a great idea to clean the system out.

Watermelon is a cleanser of heat. During the summer the body accumulates heat.  Eat a whole, big watermelon if you can. This works in the summer when the flushing action removes excessive fire, water and air. The melon must be fresh, cut and eaten within 20 minutes. Watermelon is a sponge that absorbs and flushes free radicals from the system. If you let the melon sit after cutting, it oxidizes and loses its cleansing capacity.

Sound crazy? I thought so but tried it after watching a Shaman prescribe it for a woman suffering a severe rash (a summer fire imbalance). I felt so good, I make this a regular habit each summer. About once a month I eat only watermelon… three in a day if I can.

So how do we purify our investment & business portfolios?

One really simple tip for detoxifying your investment portfolio is to sell your losers and keep your winners.

This sounds awfully simple but forty years of working with investors has shown that most investors do exactly the opposite… except the pros. They all know… sell the losers.  Next time you invest, set a limit you will allow the investment to drop before you sell.  Stick to it!

The second trick is review your portfolio now. Are there any investments you hold that you would not buy right now?  Consider selling them. Take the loss and look for something better.

Another way to purify business and investments is to simply take a holistic long term view with expanded horizons.

Since we were looking at watermelon purification, let’s take investments in nutrition as an example.

Here is an excerpt from an article in Time magazine entitled “The Real Cost of Cheap Food” by Bryan Walsh:

Somewhere in Iowa, a pig is being raised in a confined pen, packed in so tightly with other swine that their curly tails have been chopped off so they won’t bite one another. To prevent him from getting sick in such close quarters, he is dosed with antibiotics. The waste produced by the pig and his thousands of pen mates on the factory farm where they live goes into manure lagoons that blanket neighboring communities with air pollution and a stomach-churning stench. He’s fed on American corn that was grown with the help of government subsidies and millions of tons of chemical fertilizer. When the pig is slaughtered, at about 5 months of age, he’ll become sausage or bacon that will sell cheap, feeding an American addiction to meat that has contributed to an obesity epidemic currently afflicting more than two-thirds of the population. And when the rains come, the excess fertilizer that coaxed so much corn from the ground will be washed into the Mississippi River and down into the Gulf of Mexico, where it will help kill fish for miles and miles around. That’s the state of your bacon — circa 2009.

The U.S. agricultural industry can now produce unlimited quantities of meat and grains at remarkably cheap prices. But it does so at a high cost to the environment, animals and humans. Those hidden prices are the creeping erosion of our fertile farmland, cages for egg-laying chickens so packed that the birds can’t even raise their wings and the scary rise of antibiotic-resistant bacteria among farm animals. Add to the price tag the acceleration of global warming — our energy-intensive food system uses 19% of U.S. fossil fuels, more than any other sector of the economy.

And perhaps worst of all, our food is increasingly bad for us, even dangerous. A series of recalls involving contaminated foods this year — including an outbreak of salmonella from tainted peanuts that killed at least eight people and sickened 600 — has consumers rightly worried about the safety of their meals. A food system — from seed to 7‑Eleven — that generates cheap, filling food at the literal expense of healthier produce is also a principal cause of America’s obesity epidemic. At a time when the nation is close to a civil war over health-care reform, obesity adds $147 billion a year to our doctor bills. “The way we farm now is destructive of the soil, the environment and us,” says Doug Gurian-Sherman, a senior scientist with the food and environment program at the Union of Concerned Scientists (UCS).


First Lady Michelle Obama’s White House garden has so far yielded more than 225 lb. of organic produce — and tons of powerful symbolism. But hers is still a losing battle. Despite increasing public awareness, sustainable agriculture, while the fastest-growing sector of the food industry, remains a tiny enterprise: according to the most recent data from the U.S. Department of Agriculture (USDA), less than 1% of American cropland is farmed organically. Sustainable food is also pricier than conventional food and harder to find. And while large companies like General Mills have opened organic divisions, purists worry that the very definition of sustainability will be co-opted as a result.

But we don’t have the luxury of philosophizing about food. With the exhaustion of the soil, the impact of global warming and the inevitably rising price of oil — which will affect everything from fertilizer to supermarket electricity bills — our industrial style of food production will end sooner or later. As the developing world grows richer, hundreds of millions of people will want to shift to the same calorie-heavy, protein-rich diet that has made Americans so unhealthy — demand for meat and poultry worldwide is set to rise 25% by 2015 — but the earth can no longer deliver. Unless Americans radically rethink the way they grow and consume food, they face a future of eroded farmland, hollowed-out countryside, scarier germs, higher health costs — and bland taste. Sustainable food has an élitist reputation, but each of us depends on the soil, animals and plants — and as every farmer knows, if you don’t take care of your land, it can’t take care of you.

Big problems create opportunity and investments in apparently obscure but sustainable food and energy ideas can help take toxicity out of your business as well as investment portfolio.

Sustainable may not seem profitable now… but neither did Microsoft when the idea of individual PCs began.

Sustainability is vital to our future. Sustainability is a huge problem and hence opportunity so though it will not arrive overnight…this is a sector we can invest in to detoxify our wealth.

Since we are connected to our investments… this process will also help us learn to eat and live better and help purify our health as well.

Another way to purify your portfolio is to look for opportunities where you invest your own energy as well as your cash… like we are doing with our value added sustainable timber below.

Here is one little idea we are trying in our new little Blue Ridge Crafts business.

For years I have written that timber is a great investment.  Timber is the only commodity where the supply increases even when demand is down.  All you have to do during bad times… of low demand… like now is don’t sell.  Your timber continues to grow!

Now we are doing a business using dead timber and adding value! 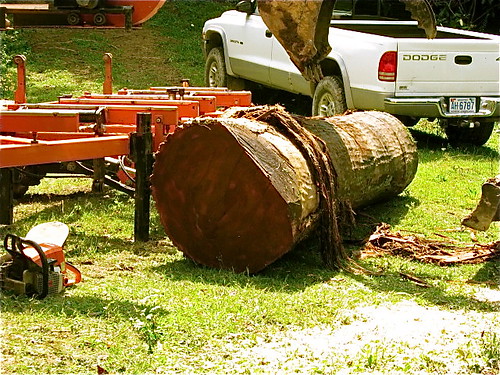 This poplar sitting right behind our house died a few years ago and dropped branches on the house all winter. This spring we trimmed off the branches and last week brought it down… cut it in three pieces and dragged them to one of our fields.

We set up a portable mill and… 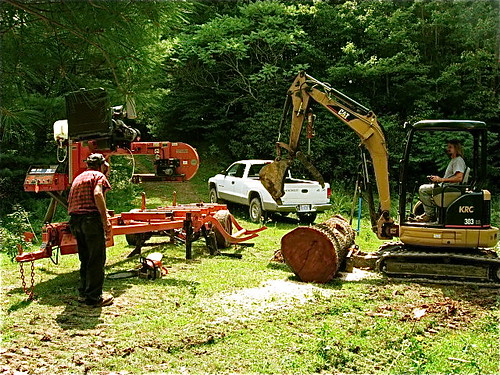 cut over a thousand board feet of nice poplar planks. 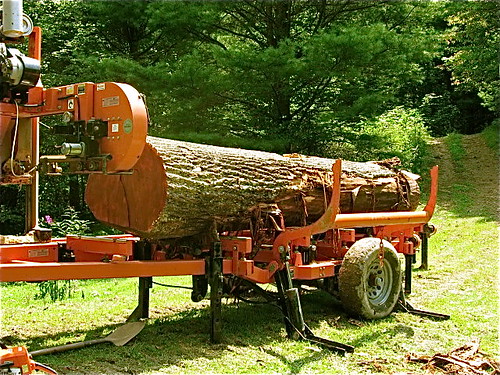 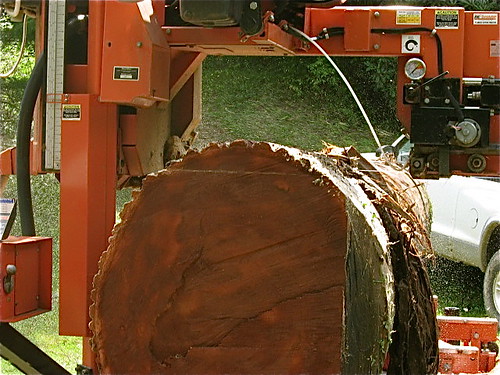 cut one huge 13 foot long slab for a table top so if anyone is interested in a 12 foot poplar table… that you help design yourself… let us know.

This is a pretty small step towards sustainability but if we all think about ways to purify our investments, our business and body, our health and our wealth…at the big level and small will improve.

A reader who travels frequently in business asked how to handle  the fact that Ecuador immigration policy does not allow a new resident to leave for more than 90 days a year for the first two years.

We checked with one of our Ecuador Living advisers, an attorney who specializes in immigration, who replied:

Please notice that in theory all resident visas come with the obligation not lo leave Ecuador for more than 90 days a year in the first two years.

Nevertheless, please be advised that authorities until now have not automatically removed a resident visa for this matter.

We have noticed that once the visa is stamped and if the passport is valid for more than two years, then you do not need to go to the Ecuadorian immigration authorities for anything else. This reduces the risk of the authorities reviewing how long you have you been outside of Ecuador during the first two years.

A good number of our clients have obtained the resident visa and have been outside of Ecuador far more than the 90 days with no complication whatsoever.

Anther option is to travel into Ecuador on a tourist visa which allows a stay in Ecuador for up to 90 days every year and this can be extended  for 90 days more.

Whether you want to live, do business or and invest in Ecuador, Smalltown USA or anywhere in the world… if you think sustainable, you are thinking… the future. This is a great place to be.