Here is a sweet funky business idea that can help save the world.

Yesterday’s message was the first in this three part series on thinking outside the box or funkiness thought. See Funky Global Business here.

When I lived in the Cotswolds in Gloucestershire, one of my neighbors was the painter Kit Williams.  He was definitely funky by the definition that he thought (and painted) out of the box.  In the late 1970s he created a book Masquerade, a children’s book that sparked a worldwide treasure hunt for a jeweled golden hare, that he had created and hidden.

Hundreds of thousands of copies sold and became the inspiration for a genre of books known today as armchair treasure hunts.

I have autographed copies of  Masquerade and Kit’s next book on my bookshelf. I pull them out once in awhile to remind myself of the power of funkiness. 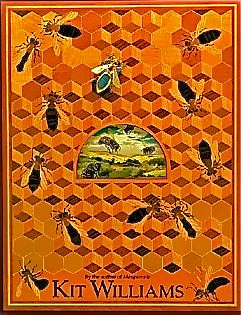 Kit’s next book was originally called the Book of Bees… so in a way he made a fortune from being funky from bees.

Now perhaps you can as well… earn a fortune from funkiness and bees.

Big problems create big opportunity.   The biggest problem is preserving our environment so one my most fulfilling accomplishments was working with Jyske Bank to create an entirely green investment portfolio that rose 266.3% in its first year.

The money was nice… but more important was the statement…. “gaining wealth and improving the environment can go hand in hand.”

One huge environmental problem that humanity faces is the loss of bees.

I have written about this problem many times… originally in an early 2006 article entitled “International Investments in Bee the World“.

Since that time I have been staying tuned for business ideas that involved bees. This was why I was so delighted when our son, Jake, introduced us to the Beehaus.

Beehaus is a new plastic beehive launched in Britain just Wednesday to encourage people to keep bees in their gardens or on rooftops to help boost declining honeybee populations. The big news is that people are keeping bees in the city…not just in the country.

A press release about Beehaus said: The bees seemed to like their ultra-modern home as they buzzed happily in and out of the postbox-like slot in the grey and yellow ‘beehaus’ on the roof of state-backed conservation agency Natural England’s London offices.

The agency’s chief scientist Tom Tew said if more urban residents kept honeybees, it would increase the insects’ numbers and make them more resilient to attacks from disease and pests which threaten their survival.

“We need to recognize that if we want plants to flourish, we need healthy populations of insects to sustain them,” Tew said.

“There’s no reason why our towns and cities should exist as wildlife deserts — wildlife can thrive when we design our urban areas with nature in mind and the ‘beehaus’ is a great example of how easy it is for anyone to bring the natural world closer to their doorstep.” The number of honeybees in Britain has dropped by up to 15 percent in the past two years, according to government figures, as they face a growing range of diseases and wild flowers they feed on are wiped out by urban development.

Bee keeping in the middle of a city.  What a funky idea!

There is an article in the Guardian Newspaper entitled  “Hi, honey I’m home – the new hobby that’s creating a buzz in Britain’s towns and cities”  Here is an excerpt:  New plastic hive promises affordable beekeeping.  The humble native honeybee has been dying out in recent years due to disease, but it may have found an unlikely ally in a creature which shares a reputation for busyness: the urban dweller.  Apiarist courses in many places are over-subscribed and membership of beekeeping associations has shot up with the increased awareness of the plight of the productive pollinator. Those without gardens are increasingly using rooftops for their hives.

With promises of 50 jars of homemade honey a year they hope to tempt the busy townie who dreams of the good life. And with the support of Natural England, the agency responsible for safeguarding England’s natural environment, its green credentials seem intact.  Certainly, there is a market.

“There has been a definite shift in the demographics of people coming into beekeeping,” said Tim Lovett, chairman of the British Beekeepers’ Association, which has seen membership increase by 3,000 to 14,500 in the last 18 months.

“Many of our new members are in urban settings, the worried wealthy, so to speak. They are environmentally aware people, who would like to do a lot more than they are able because of their busy lives.

“They are the concerned working families, the professionals under pressure from their kids who are getting the story at school. And now they are getting the message. Beekeeping is not incompatible with busy family and working life.”

But with urban beekeeping comes responsibility. There are fears would-be beekeepers, seduced by the apparent simplicity of the new hive, could order on a whim with no thought for the practicalities. This could lead to the spread of diseases, the death of their bees or huge swarms in their neighbours’ gardens.

“These are legitimate concerns,” said Dr Tom Tew, chief scientist for Natural England, “and the first thing we would stress is that anyone thinking of keeping bees should speak to their local beekeeper association.

“But,” he said of the Beehaus, “we support anything that helps promote the honeybee.”


The Beehaus has been developed by Johannes Pauls and his company, Omlet, previously created a plastic chicken coop, called Eglu, that sparked a wave of urban chicken keeping in England. Omlet supplies everything including a full bee suit for about  $800. Bees cost between $100 and $200. They will provide training parties as well.


So where is the sweet funky business opportunity?

Merri and I have been doing all we can here at our farm to encourage bees.

We continually buy the local honey and give it away as gifts to encourage local bee keepers.  Here are two and a half quarts we bought at the farmers market last Wednesday. 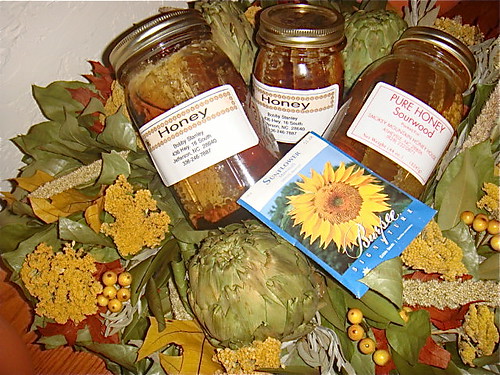 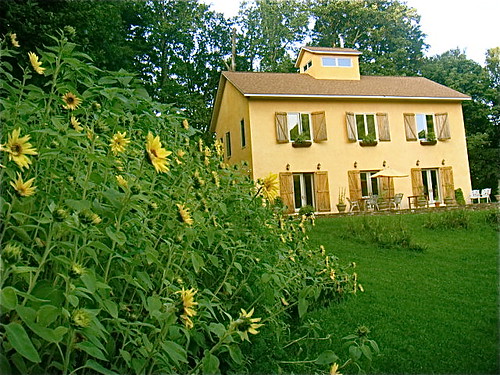 A lot of them because… 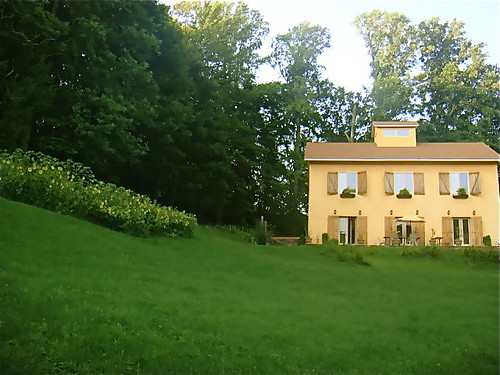 they attract bees. Often two bees will be on each blossom, like these busy guys I photoed last night. 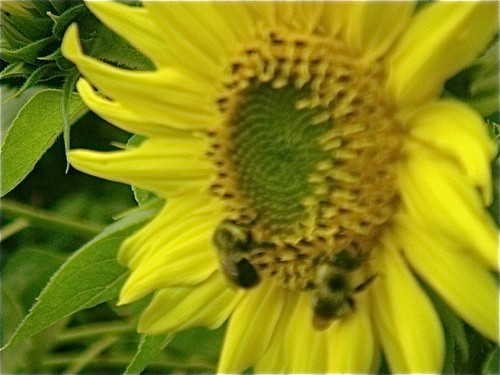 Not to mention the bouquets I get to put on Merri’s desk. 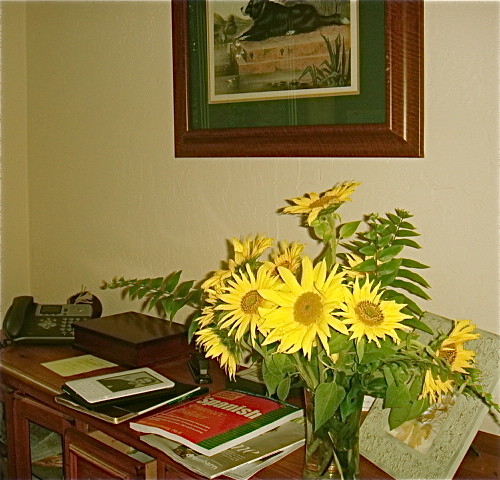 Beehaus is just in the UK.  You may want to export Beehauses from there.

Or create and sell something like it your own… in your urban area.  The need is global.

I bought the three jars of local honey above on Wednesday and paid $12 a quart. (But this was at the Farmers’ Market in Ashe County, where prices are very low.)   If one hive produced 50 quarts, at $12 a quart this would generate $600 income a year on an investment of maybe $1.000 plus an hour’s work a week.  60% is a pretty good cash flow to work with.

There are a multitude of fringe opportunities that can be built around this sweet,  funky, simple idea… that creates profit and is good for the environment.

How can we start a sweet, funky global business?  Certainly our emailed course on how to have a global internet business can help.

Yet there is more. Bees may be your thing or not.

Do what you love.

Merri and I love nature and honey… so this idea might make sense… for us.

Though a funky bee keeping business will not be for everyone… we can let bees tell us how to find our business.

Our son, Jake, just introduced this idea it to me… and by happenstance, the day before I had felt compelled to take these shots of Foxglove and bees in our front yard. 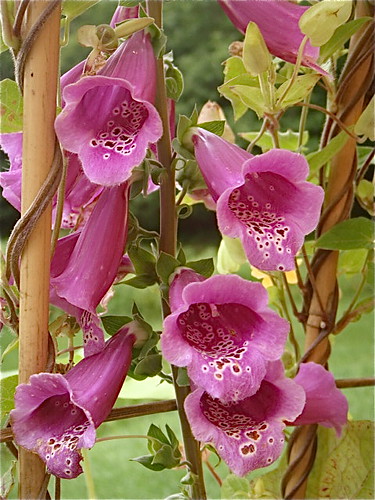 These flowers have this intelligence to become an object of such beauty that bees fall in love. 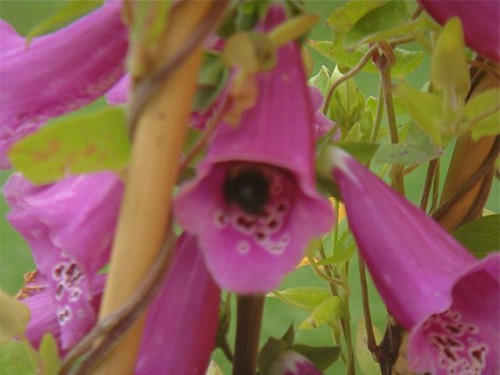 Here is one dancing in her sweet nectar… the flower and the bee in a romance …apart but as one in a dance of life.  Not knowing that in their worship they are also pollinating the world.   They do not do this because they think this is what to do.  They are led by the divine intellect of the heart… filling their being with joy.

You can let that same infinite wisdom in your heart lead you to turn your passion into a profit.

Sound pretty funky?   Good.  Go for it and Bee the world!

Interested in writing and publishing to sell a micro business?  Learn about our Self Publishing course and how to save $597 here.