At our July 2009 international investing seminar, we reviewed the Dow’s previous 16 year down cycle which ran from February 1966 through August 1982. 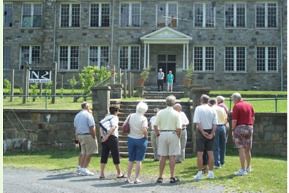 Here are delegates  at a local winery for a wine tasting after the course.

Then we looked at three charts comparing the Dow’s performance over various two year periods  to the period July 2007 to July 2009.

This suggests that in the next two years, we’ll see a lot of sideways motion with some severe drops.

The next chart suggests that between 2011 and 2014 we’ll see even more severe drops. Again ignore the black line.  This represents the Dow over the last two years and  has no bearing on these periods.

The blue line is what history suggests the Dow might act in the years ahead. 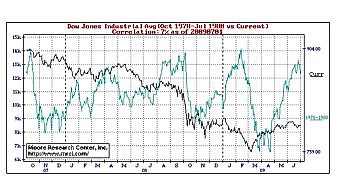 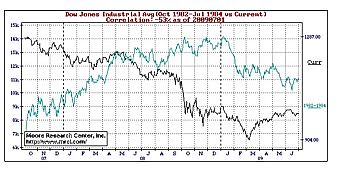 This led us in the seminar to see seven places to invest now.

In my Spring 2009 edition, I wrote that Benjamin Graham’s margin of safety indicates that much better times may lie ahead for global equity investors. I was not aware, however, that such a powerful turnaround was underway. After seven consecutive negative quarters, global equity markets had in the second quarter 2009 their sixth best return since inception of the MSCI Indices at the end of 1969. The Morgan Stanley Capital International (MSCI) World Total Return Index (with net dividends reinvested, December 1984=100) advanced 16.5 % in local currencies, 20.7 % in US dollars and 14.3 % in euros.

During the first half of the year, sixteen markets advanced and two markets
declined.

The Top Value Model Portfolio based on the Top Value Strategy using national MSCI country indices as hypothetical investment vehicles, finished the second quarter 2009 at +21.9 % in local currencies,  (+30 %) in dollars and +23.1 % in euros outperforming the benchmark by 5.4, 9.3 and 8.8 percentage points,
depending on the currency.

There were two changes in our performance ratings last quarter: Hong Kong and Belgium were downgraded to “Sell” from “Buy”.

Our current ratings suggest that these markets offer the highest expectation of long-term risk-adjusted returns.

I show these numbers with the usual caveats: Forecasts are dangerous, particularly those about the future.


It is interesting to show that Keppler’s projections for value investments shows appreciation into 2014.

History however suggests that equity investments may be subject to a lot of turmoil for the next few years. The down periods will create exceptional value if you can ride though the storm and hold on medium to long term. The volatility will also create some trading opportunities for those who are qualified to buy and sell shorter term.

I am especially cautious now. See why at International Investments Warning.

You can see several ideas on what to do now at our password protected site as a Multi Currency Portfolios Course subscriber.

Join us in Ecuador and learn Super Thinking.

Join Merri me and Thomas Fischer of JGAM in North Carolina this October and enroll in our emailed multi currency course free. Save $175.

Learn more about global investing, how to have an international business and early retirement in Ecuador.

The Balance of our 2009 course and tour schedule.

Learn how to import Ecuador roses.