The global response to the economic downturn has been a strong increase of  government spending… via increased money supply and vast amounts of borrowed funds.

Expanding the money supply and moving money out of the private sector into the government domain usually creates inflation.

I expect this to be true in this instance so have been writing for months, “invest in stocks, commodities, real estate and your own business”.

A recent article in the Economist showed that the US deficit could be three trillion dollars in 2010.   Half of this would come from borrowed funds.

A free fall in purchasing power of all currencies is more likely than in previous recessions (1970s and 1980s), because then, the US overspent but other major governments, especially Germany and Japan, were still conservative and fiscally prudent.

This is no longer true. West Germany unhinged fiscal common sense when it absorbed Eastern Germany.

Excerpts from a May 14, 2009 article in the Financial Times entitled “Germany set to suffer record deficit” by Bertrand Benoit says:

Mr Steinbrück admitted the federal deficit would exceed €50bn in 2009 and rise to €90bn next year, more than twice the previous record of €40bn set in 1996 as Germany was absorbing the huge cost of its unification. In contrast, the federal deficit last year was only €11.9bn.

The figures, based on official tax revenue forecasts released on Thursday, make it clear Germany will breach the European Union’s fiscal rules by a wide margin this year and next. Berlin expects the economy to shrink by 6 per cent this year in the sharpest contraction since the Great Depression of the 1930s.

Germany and Japan have both been hit especially hard by this recession because their economies have been so dependent on exports and global trade.

Germany has a huge amount of short-time working and its exports have fallen dramatically.  Like almost everywhere, government income is dropping as spending is on the rise.

First-quarter 2009 gross domestic product figures show that Germany, which has relied heavily on exports of industrial goods, has taken a much bigger hit from the global slump than other big European nations.

First quarter German GDP shrank 3.8 per cent compared to the last three months. This is the largest quarterly fall since the statistic began in 1970.

If the German economy were to continue to shrink at its current pace, it would be a 20% smaller by the end of 2009.

This means Germany remains in default (as does France, Italy and Spain) of the three per cent limit in the EU stability pact.

All eurozone countries, but especially those with larger deficits, such as Italy and Spain, face a similar problem…  rising costs… aging populations… growing pension and health costs while faced with reduced income.

Japan recently suffered its first annual trade deficit in nearly three decades and business has slowed dramatically there. Global demand for Japanese products plummeted in 2008 and exports were down 16% in the year to March 2009 compared to 2008.   Exports in February and March 2009 were half of those in 2008!

The first three months of 2009 had the biggest drop in more than half a century.

The Hong Kong government predicted that GDP would contract by up to 6.5 per cent in 2009.  Total exports dropped 22.7 per cent in the first three months of 2009 compared with the previous year – the biggest drop since 1954. Overall investment fell by 12.6 per cent and private consumption by 5.5 per cent. The unemployment rate also rose to a 38-month high of 5.2 per cent in the first quarter.

Huge economic problems create huge investment opportunity and one of the greatest problems facing the world is that education has not evolved as fast as democracy.  Too many poorly educated voters expect their government to do more than they can… or should.  The voter’s desires and expectations are ill informed and generally incorrect… yet their vote is as powerful as an educated one.

This forces politicians to act (spend) more than they have.  This tends to create inflation.   This rather predictable fact has become increasingly global so choosing a strong currency becomes increasingly hard.  Most currencies are at risk to inflation.

This is why stocks, commodities, real estate and your own business makes so much sense now.   There is a caveat.  Always invest in good value in these things.

This is why my attention was really captured when I read about the ALTIS Global Resources Fund.

This is a fund that invests in commodity backed equities and is advised by value guru Michale Keppler.

This creates a powerful combination for opportunity.  The figures below support this.

Gary, Attached please find the latest Fact Sheet and Performance Review (as of April 30, 2009) for the ALTIS Fund Global Resources, a global sector fund we advise, which was featured in an e-fund journal report of May 4, 2009 as one of the “top 10 natural resource equity funds” based on its 5-year Sharpe Ratio calculated by Lipper.

This fund seeks long-term growth of capital by investing primarily in equity securities issued by companies located anywhere in the world with business operations in the energy, natural resources and precious metals sectors.

The fund is managed according to an active value-oriented portfolio strategy using quantitative stock selection techniques to identify attractively priced securities based on multiple valuation criteria.

The fund adviser seeks to capitalize on market inefficiencies by employing a highly
systematic investment process that incorporates size, country, sector and industry controls and provides for a  rigorous buy and sell discipline designed to maximize the portfolio return potential and to control the risk of loss.

Not many investments did well in 2008. This fund was no exception and it dropped  51 % in its net asset value in that year.

However if you take a longer view, over the past five years the ALTIS Fund Global Resources delivered a 13.6 % annualized return through May 11, 2009.  This fund also dramatically outperformed its benchmark index (Morgan Stanley World Index) as you can see in this graph. 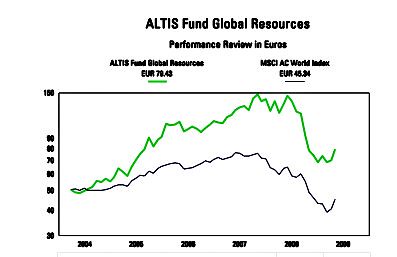 Interestingly, the euro is almost at the same parity now that it was five years ago. Had one invested 1,000 dollars into the fund at that time, the fund would have turned it into approximately $1,700 now… even after the 51% loss in 2008.

The managers of this natural resource fund have a positive outlook for the asset class, at least over the medium to long term.  They base their assessment on the scarcity of supply of many natural resources.

A German article in Efund Journal questions this positive assessment. Here is a translation of part of this article:

Whit Collier, Manager of the Fortis L. Equity Energy World, puts it in a nutshell:

“After the sharp declines of the past year many of the stocks are now available at very attractive prices.”

The top-ranked fund in its asset class based on five-year Sharpe Ratio is currently the Investec GSF Global Energy with an average annual performance of 11.21 percent over five years. Year to date performance, at 14.94 percent, is even stronger.

The runner up, First State Global Resources, returned  24.63 percent year to date and an average annual 9.08 percent over five years.

The ALTIS Fund Global Resources, managed by Michael Keppler, came in third in the five-year ranking by e-fundresearch.

Over the past five years, the Fund delivered a solid return of 8.81 percent per year on average. In the first four months of this year, it is up 13.29 percent.

“Following the most recent depletion of inventories – in particular in the
nonferrous medals sector – I expect prices to stabilize by the end of the year,”
Keppler says in an interview with e-fundresearch. This applies to both metals and
energy resources.  Analysts at Carmignac Gestion also have a positive outlook
for natural resources. In their view, production adjustments are already beginning to be reflected in the recent copper price surge. In the energy sector, the measures taken by OPEC to reduce supply have had an impact on prices.

“Following the most recent depletion of inventories – in particular in the
nonferrous medals sector – I expect prices to stabilize by the end of the year,”
Keppler says in an interview with e-fundresearch. This applies to both metals and
energy resources.  Analysts at Carmignac Gestion also have a positive outlook
for natural resources. In their view, production adjustments are already beginning to be reflected in the recent copper price surge. In the energy sector, the measures taken by OPEC to reduce supply have had an impact on prices.

According to Keppler, the ALTIS Fund Global Resources, has relatively large allocations to British and US natural resource stocks. “In the emerging markets, we have the largest positions in Brazil and South Africa,” he explains. As far as the sector weights are concerned, close to 60 percent of the Fund’s assets are invested in energy stocks, while 36 percent are allocated to materials. Less than one percent of the assets are invested in paper stocks. The current cash position of the Fund is 3.5 percent.

Some American readers may have trouble buying this fund so if this concept fits your needs, look for funds with similar missions and portfolios.

Here are some details about this particular fund. 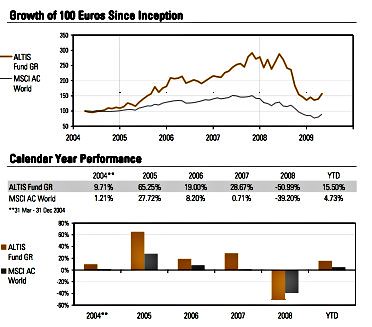 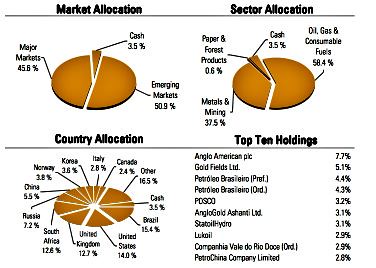 Here are the recent top equities held in the portfolio:

Here is a recent sector breakdown of the fund:

Here is a country breakdown of investments:

This is quite a small fund with assets of about 17.6 million euro.

Economic downturns are the time of greatest opportunity because they create value.   Mutual funds like the ALTIS Fund Global Resources Fund may create special opportunity now.