“Green  Cars”  means something different now… than it did when I began to drive.

45 years ago a “green car” meant something like this! 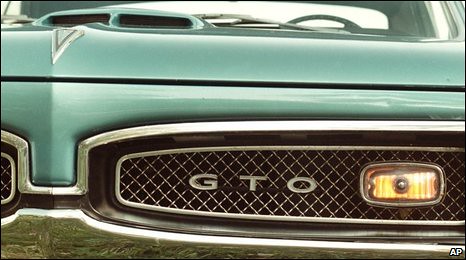 Thinking about this change can help us cash in on green investing.

Actually buying a car like the GTO would have been a pretty good investment.

Rare cars had really good appreciation for many years… but the green, very non green, GTO above can tell us more about where to invest in “Environmental Green.”   A change in green mentality can show us how to spot special investing value that goes way beyond collecting antique cars.

This was my first car.

I lived a mile from an isolated levy on the Columbia River… so yes, I drove my Chevy to the levy.

No more!   Bye Bye Miss American Pie is a more appropriate tune since Pontiac is about to die.   What could be more American Pie than a Pontiac?

I know because this was my second car… 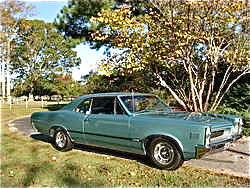 These pictures from www.cardomain.com brought back fond memories.  I can list every car I have ever owned in order… it’s a guy sort of thing… but this is not the point here.

That Pontiac had a special new Pontiac – built 230 cubic-inch overhead cam six power plant, the only such engine found in an American production car at that time.  This was available in this Sprint option package on two-doors with a four-barrel, high-compression 207 horsepower version,  marketed as an alternative to higher-priced European sport sedans, which had similar OHC engines.

This motor was hot and was fuel efficient!  Here is a picture. 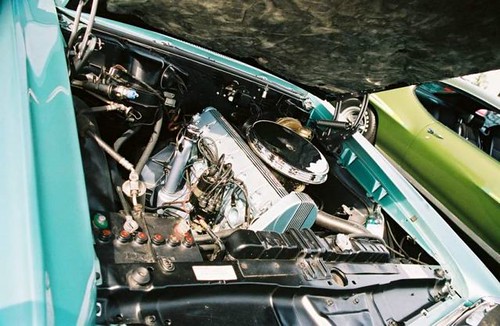 Then the idea of smaller more fuel efficient engines was lost.  The gas guzzling GTO with a huge eight cylinder took over and this type of engine became hot.  Europe’s idea of smaller, high performance fell to the idea of … just plain… BIG.

Bigger is better.   Faster is good.   Power is king.  These became  the American ideals and most of us (boomer) guys and gals bought into it.

This led society down an incorrect, unsustainable path of consumption worth mentioning now because of Pontiac’s recent death.

Here is an excerpt from that article:

The GTO transformed Pontiac into a muscle car brand.

Pontiac has become the highest-profile victim of the crisis in the American car industry.  The decision this week by General Motors to discontinue the brand shocked a generation of petrol heads who fell in love with the all American muscle cars the company developed in the 1960 and 70s.

We are talking about cars like the Pontiac Firebird, The Grand Am and the GTO.
Like Route 66, roadside diners and baseball all of these vehicles have become genuine artefacts of U.S. culture.


“If ever a car company defined swagger – Pontiac was it,” says Peter DeLorenzo who runs the Autoextremist.com blog.


“Pontiac delivered cars to the market bristling with a maverick, edgy appeal and genuine soul – a commodity so far removed from most of Detroit’s products then that it was striking,” he says.


Things began to change when the company employed John De Lorean, who later founded the ill-fated De Lorean Motor Company, as its new head of engineering in 1956.

However, the vehicle did not meet General Motors’ corporate guidelines because they were considered too fast and breached an agreement with other manufacturers within the GM group to avoid building performance cars.


Regardless of that, a handful of the cars were built and Pontiac salesman drove them around to test public reaction.  They got 5,000 orders.


Once the board at General Motors found out, the GTO was born.


The popularity of the car encouraged the company to transform itself into a performance brand.


Alongside the GTO the company developed the Grand Prix and the Firebird during the 1960s, all of them muscle cars.

The demise of Pontiac is a clue… the end of a wasteful non sustainable way… plus it’s part of  this economic slowdown that signals huge socio-economic changes.

The global financial correction has pushed equity markets down everywhere and ended as time Magazine puts it, “the end of excess”.

American society revered big. Bigger was better. The more one had… the bigger the house… the faster the car… the greater the consumption… the more a consumer was respected.

Perhaps no more.  Now being environmentally sensitive is cool.

This creates a distortion because green shares have been especially hard hit.


There is a reason for this.  A USA Today article entitled “Going green can cost too much green” by Alan Gomez may help explain why.

Here are excerpts from this article:


For two years, the city of Durango, Colo., bought electricity for all its government buildings from wind farms. The City Council ended that program this year, reverting to electricity derived from coal-burning plants and saving the cash-strapped city about $45,000.

“It’s very hard for us to lay off an employee to justify green power,” City Manager Ron LeBlanc said. “Those are the tradeoffs you have to face.”

Across the country, government agencies are either cutting or shrinking programs that use or fund renewable energy projects. Green power — from wind farms, solar power or other renewable energy sources — remains more expensive than traditional power sources.

As budgets shrink, some people have had to scale back their green ambitions.
Pennsylvania passed a comprehensive energy plan last July that included a $100 million program to encourage people to invest in solar energy. The Pennsylvania Sunshine Program would provide reimbursements to homeowners and small business owners who installed solar electric and solar hot water projects.
The program has yet to begin, and the state will start with only $30 million in grants, according to Scott Dunkelberger, executive director of the Commonwealth Financing Authority, which administers the funding of Pennsylvania’s economic development programs. “We just want to take on the debt that we need,” he said.
That has left some in Pennsylvania waiting.

Buyers and investors have been backing off green because of short term financial concerns. Yet the huge long term problems of sustainability have not been resolved. Driving old Pontiacs might be cheaper in the short run then building new energy efficient cars… but returning to “Gitiup Little GTO” will not solve the problem’s of the high energy costs that those dual quads consume nor deal with the pollution coming from the twin exhausts.

Wise investors with a medium and long term view can gain extra value by investing in the value created by distortions in green shares that are vital to society in the long term… but depressed more than the norm right now due to short term economic concerns.

One example of this is that a no car trend is also growing. Excerpts from A New York Times article entitled “In German Suburb, Life Goes On Without Cars”
by Elisabeth Rosenthal.

VAUBAN, Germany — Residents of this upscale community are suburban pioneers, going where few soccer moms or commuting executives have ever gone before: they have given up their cars.

Street parking, driveways and home garages are generally forbidden in this experimental new district on the outskirts of Freiburg, near the French and Swiss borders. Vauban’s streets are completely “car-free” — except the main thoroughfare, where the tram to downtown Freiburg runs, and a few streets on one edge of the community. Car ownership is allowed, but there are only two places to park — large garages at the edge of the development, where a car-owner buys a space, for $40,000, along with a home.

Ecuador has some green potential in this way because Ecuador has a great import law for cars.  You cannot import used cars to Ecuador.  You can only import new cars only…ie. in 2009 a 2008 or newer.  This helps keep junkers, gas guzzlers and smokey, old wrecks off the road.

Merri and I encourage people to forget the car in Ecuador… for several reasons.

First, it is a hassle.

Second, the taxes are  high for imported vehicles. The norm for taxes for a regular car is near 50% and as the price of the car rises…so does the percentage of tax.  Cars over $100,000 have a 100% tax.

Third, hiring a car with driver (this what Merri and I do) is really inexpensive. Cars used for commerce (i,e. taxis) can be imported into Ecuador tax free. Gas is cheap (about $1.50 a gallon) and drivers do not earn a lot.  These facts often make it cheaper to hire a car with driver than to own a car.

Using a car and driver avoids getting lost.  You eliminate the legal hassle of fender benders and provide employment. Very few of the many people I know who have moved to Ecuador have a car.

Learn more about Ecuador cars at Driving in Ecuador

Owning one’s car is ingrained in the North American mentality. I am reminded of this every time I drive through a city during commuter hours. There are miles upon miles of individuals each sitting in one car.

I understand this… the minute I turned 16  I had to get a car… a big one that was fast.

That mindset was an error that the world (and many individual budgets) can no longer afford… so say bye bye Miss American Pie and so long Little GTO.  Invest in green and when possible do what you can to eliminate one person… one car.

Learn more about green investing at our upcoming International investing and business courses.

You can read the entire article “Going green can cost too much green” at www.usatoday.com/money/industries/energy/2009-05-03-greencities_N.htm

You can read the entire article German Suburb, Life Goes On Without Cars at http://www.nytimes.com/2009/05/12/science/earth/12suburb.html?_r=1&th&emc=th