Before we start this lesson remember… as a multi currency subscriber,  Jyske Global Asset Management is waiving the $499 fee ($750 for two) for  its upcoming May 29-31  JGAM Florida Investment Seminar. You can attend free.

Now onto the lesson:

This lesson will examine three reasons why gold will probably rise and why it makes sense to hold gold as a medium to long term investment.


Our last lesson looked at how on March 12th (JGAM) Jyske Global Asset Management’s suggestion to take a long position in Pounds Sterling at 137.92 GBP/USD.   See that lesson here.

We saw how JGAM made a 6% profit in two weeks.

When JGAM made that call, they also wrote:

Gold prices fell below 900 $/Oz and we decided to buy positions in gold in all managed portfolios.

We bought the physical gold ETF (PHAU LN) with a 5%, 10% and 20% in low, medium and high risk portfolios respectively. This also applies for the leveraged standard portfolios.

The rational behind the significant gold position is to hedge against further price reductions in the stock market.

ETFS Physical Gold shares (PHAU) are traded on the London Stock Exchange (denominated in US dollars) designed to offer investors a simple, cost-efficient and secure way to access the precious metals market. PHAU is intended to provide investors with a return equivalent to movements in the gold spot price less fees.

So shares of this ETF offer a similar profit potential to gold.

This past month shows how effective they are. Here is the last month’s gold chart from www.Kitco.com 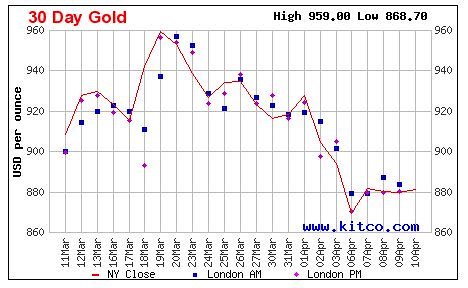 Here is the chart of the ETF PHAU from the London Stock Exchange site:

You can see how the mid March to Mid April charts are almost identical.

The gold price unfortunately rose and then dropped again over the last month.

This is not anything unsuspected.   Only the most sophisticated investors should try to catch short term gold price moves. Investing in gold at good value thresholds makes sense but ONLY from a long term point of view.

Let’s view three problems in more depth because investing in good value is always a great way to make a profit which leaves the question… “Does gold’s price in the $900 price range represent good value?”

The Big Three suggests that a $900 price does represent good value.

In the past, the Big Three would be thought of as the three US car manufacturers.

To understand the value of the dollar versus gold let’s re-examine these Big Three problems that our greenbacks face.

The current economic bailout is one.

We’ll see that this is a big enough problem…  but not the biggest. This is the smallest of the three even though that the downturn has shifted attention away from the two, even worse, economic problems that loom ahead… Entitlements (Social Security-Medicare & Medicaid) and Debt Interest.

A recent article entitled “Deficits, Debt and Looming Disaster: Reform of Entitlement Programs May Be the Only Hope” by Michael Pakko in the “Regional Economist” a quarterly review by the Federal Reserve of St. Louis may give us some clues about the current AND upcoming problem.

For the fiscal year 2008, the federal government’s deficit totaled $455 billion, the largest ever for a single year.  In the final days of the fiscal year, which ended Sept. 30, the total federal debt rose above $10 trillion for the first time. Forecasts for 2009 anticipate an even larger deficit.[1] As a new president and Congress take office, government deficits and the public debt will undoubtedly be a factor in economic policy discussions, especially in light of ongoing financial uncertainty and economic weakness.

Pakko goes to say that deficits are not always bad but then adds:

Nevertheless, when deficits are part of a fundamental structural imbalance in the long term, they signal a need for serious attention and reform. In a long-run fiscal analysis of U.S. federal government programs, this is demonstrably the case.

The article includes several graphs and says of this first graph:

The top panel of Figure 1 shows two measures of the federal deficit. The blue line is the official measure reported by the government—$455 billion for fiscal 2008. The red line tracks the change in the total outstanding national debt from year to year. By this measure, the deficit exceeded $1 trillion in 2008.[2] Note that the reported unified budget showed a surplus in 1998 through 2001; however, the change in the national debt has recorded red ink in every fiscal year since 1969. The difference between these two measures primarily reflects the treatment of the Social Security trust funds.[3]

In other words, I believe this article is saying that “unified debt” means the government is counting the money received in Social Security payments. If these SS donations had been subtracted (and correctly placed in a trust fund), the US debt would have increased every year since 1969…. ever year debt grew for the past 40 years!

Most of the time even when the SS money was taken there was still a deficit.

However the article explains that is not necessarily a problem when it says:

When expressed as a percent of GDP, as shown in the lower panel of Figure 1, recent deficits have not been exceptionally large. In fact, official deficits in the mid-1980s were nearly twice as large as the 3.2 percent of GDP recorded for 2008. Even using the alternative measure, last year’s change in the national debt amounted to 7.6 percent of GDP—only slightly greater than the 7.3 percent of GDP registered in 1986.[4]


U.S. government debt is also not particularly large compared with that of other countries. In 2007, France’s government debt amounted to approximately 70 percent of GDP, Italy’s debt-to-GDP ratio was nearly 120 percent and Japan’s was over 170 percent.


Put in perspective, current deficits and debt levels are high, but not unprecedented. Should this red ink be a cause for concern?


Here is the chart that backs this assumption. 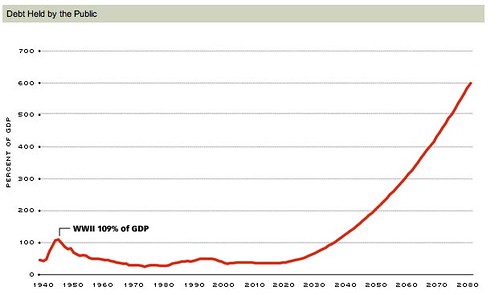 The chart suggest that the real problem begins in about 2040… one that will not concern many of us Baby Boomers.

However there is more.  The article goes on to say:

While the immediate impacts of government deficits and debt are a matter of some controversy, most economists agree that the long-term fiscal outlook for the U.S. requires serious attention.  The retirement of the Baby Boom generation and a slowing rate of growth in the labor force will create a demographic time bomb in which entitlement growth threatens to swamp available resources.

As mentioned earlier, the Social Security trust funds are projected to begin running down in 2017. By 2041, they are expected to be depleted.[6] One way of measuring the long-run shortfall is to estimate the present value of unfunded obligations, that is, to estimate how much money would be needed, in today’s dollars, to pay for future promises in excess of expected tax revenues. In the case of Social Security, the U.S. Treasury estimates that paying promised benefits through the year 2081 would require $6.8 trillion, in addition to taxes collected under current law.[7]

The situation is even more dire when we consider health-care costs. The unfunded obligations of Medicare parts A and B amount to a present value of $25.7 trillion. Medicare Part D (prescription drug coverage) adds another $8.4 trillion. All told, the shortfall for government social insurance programs comes to a present value of $40.9 trillion. This is the government’s official estimate—some private sector economists suggest that the total burden is even greater. Economist Lawrence Kotlikoff has recently estimated the total unfunded liabilities of current federal programs at $70 trillion.[8]

Figure 2 displays recent forecasts from the Government Accountability Office, illustrating the budget implications of these trends. The upper panel shows accelerating deficits over the next seven decades. Assuming revenues held constant at the historical average of 18 percent, these projections show the deficit rising to over 40 percent of GDP by 2080. The lower panel of Figure 2 shows the implications for the federal debt: an exponential rate of increase that reaches over 600 percent of GDP by 2080. This would far exceed any level of government borrowing in history.

These projections are unlikely to actually occur. The trends are unsustainable. Long before reaching such unprecedented level of borrowing, there would surely be a crisis of confidence among U.S. creditors, both domestic and foreign.

Current measures of the federal deficit and the national debt, as dismal as they might appear, fail to reflect full consequences of current-law fiscal policy. The unfunded future liabilities of government entitlement programs imply rising deficits and a ballooning public debt far larger than today’s shortfalls. And debates about the immediate economic impact of government deficits on private savings and interest rates, while of academic interest, fail to address the full importance of these long-run consequences. Fundamental reform of entitlement programs is critical for putting U.S. fiscal policy on a long-run sustainable path.

Here is the chart that backs up these assumptions and shows how increasing entitlements AND interest destroy the federal finances:

There are three critical issues to consider.  First that government statistics almost always downplay the negative side of reality.

Second, that these statistics appear especially wrong footed. They show entitlements leveling and “Other Government” spending dropping between now and 2030.

Current events suggest that this may not happen.  If we look at Japan’s recovery program we can see that the Japanese recovery program has been growing for 15 years now.. without any great results.

Third, the US government seems to be going in exactly the wrong direction. Innovation… new technology and capitalism are what create economic growth… not government spending.

In fact the article above alludes to that when it says:

When the government runs a deficit, the borrowing needed to finance the shortfall diverts the private savings that would otherwise flow into investment. One of the expected manifestations of this “crowding out” effect is that government deficits, by increasing the competition for loanable funds, put upward pressure on interest rates.

High interest slows economic growth… the very thing the government is trying to create.  To avoid high interest now, the Feds are flooding the system with liquidity which will create inflation and the loss of the dollar’s purchasing power.

This is why gold fundamentals look good.  Gold acts as a real money so in the long term gold is likely to rise.

In addition, even though the economic downturn reduced the fundamental dead end for commodities and gold, the fear that the downturn creates is likely to create a number of fear based spikes in the price of gold.

Getting a grasp on where the real price of gold should be is difficult because of the wild spikes in its price since the 1970s.   However the analysis above shows  that if one’s liquidity needs allow at least a medium term holding period, gold purchased below $900 an ounce will produce a profit at least in line with the loss of the dollar’s purchasing power.

You can see the entire Deficits, Debt and Looming Disaster article here.

You can get more information  about JGAM from Thomas Fischer at fischer@jgam.com


Join us in Cotacachi, North Carolina or Florida.

This multi currency seminar is in Naples, Florida May 29-31.  The fee to attend is $499 ($750 for two) Multi Currency subscribers can attend free.

Learn more about the seminar here.

You can enroll free for that seminar here.


Our other three courses with JGAM are