#1: The first currency fundamental is the excessive strength of the US dollar.

#2: The second is the weakness of the euro.

Here is a chart of the US dollar’s long term parity versus other currencies. 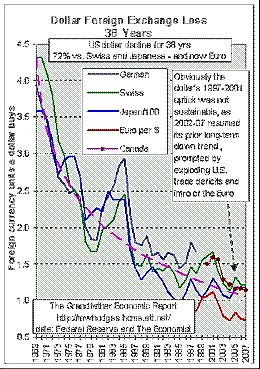 The dollar’s value follows the long term fundamental… down… down… down.

The US borrows more… has a greater debt and a bigger trade deficit than other countries.  So in the long term the dollar should fall.

Yet in the early 1980s when there was a severe recession in the United States which began in July 1981 and ended in November 1982, the US dollar roses… temporarily… for about seven years.

The primary cause of the recession was a contraction by the Federal Reserve that pushed interest rates very high.

This high interest rate, and economic fear around the world, pushed up the US dollar.

Think about the profits that were made by investors who continued to bet against the dollar long term during that time.

I believe the same is true now. he dollar is being pushed up short term by fear… as fundamentals grow worse.  This time the dollar does not have the high interest rate to add to its boost.

One part of the dollar’s strength right now is the question  “where currency should be bet against the greenback.”

This brings us to the second potential currency fundamental, the weakness in the euro.

The euro is not a trustworthy currency now. A March 1, 2009 New York Times article by Steven Erlanger and Stephen Castle entitled “Growing Economic Crisis Threatens the Idea of One Europe” explains why.  Here is an excerpt from that article:

The leaders of the European Union gathered Sunday in Brussels in an emergency summit meeting that seemed to highlight the very worries it was designed to calm: that the world economic crisis has unleashed forces threatening to split Europe into rival camps.


With uncertain leadership and few powerful collective institutions, the European Union is struggling with the strains this crisis has inevitably produced among 27 countries with uneven levels of development.

Whether Europe can reach across constituencies to create consensus, however, has been an open, and suddenly pressing, question.


“The European Union will now have to prove whether it is just a fair-weather union or has a real joint political destiny,” said Stefan Kornelius, the foreign editor of the German newspaper Süddeutsche Zeitung. “We always said you can’t really have a currency union without a political union, and we don’t have one. There is no joint fiscal policy, no joint tax policy, no joint policy on which industries to subsidize or not. And none of the leaders is strong enough to pull the others out of the mud.”


Thomas Klau, Paris director of the European Council on Foreign Relations, an independent research and advocacy group, said, “This crisis affects the political union that backs the euro and of course the E.U. as a whole, and solidarity is at the heart of the debate.”


“All of that is in doubt if the cornerstone of the E.U. — its internal market, economic union and solidarity — is in question,” said Ronald D. Asmus, a former State Department official who runs the Brussels office of the German Marshall Fund.


If the the euro is not a good bet against the US dollar, what is?

A recent recent major currency review and followup lesson looked at how to value currencies by analyzing  government debt and trade balances. That study highlighted  the Danish kroner as a strong major currency to hold right now.

From the study we saw that four currencies had the best long term fundamentals.

We favored the Danish kroner due to its very high interest rate compared to most of the major currencies…especially the euro…  4.50% versus 0.27% for the US dollar and 2.12% for the euro.

The Danish kroner has higher interest…  a balanced budget…  and positive trade and current account balances… plus it has been falling versus the dollar.

This is what I look for…  value… a currency that is down when all its fundamentals are up.  Plus Denmark has low inflation ranking fourth behind Japan, Switzerland and Canada.

The long term fundamentals suggest that the four currencies above will be strong. However some shorter term dynamics make two other investments, the British pound and gold interesting right now.

We believe GBP has been hit too hard lately and also believe that the USD may head for a technical correction lower.

We recommend you to buy GBP/USD at these levels with a stop loss of 1.3380

This investment case is suitable for all risk profiles as we use a stop loss.

Gold has found support at the USD 900 level

Demand for gold as a commodity

A technical weakening of the dollar is positive for gold

You can get more information  from Thomas Fischer at fischer@jgam.com


Investors who wish to invest in gold can also check into Perth Mint Gold certificates You can learn how to hold gold at a very low costs with Perth Mint Certificates from Asset Strategies. Details are available by writing rcheckan@assetstrategies.com

We will update currency recomendations at the upcoming May 29-31  JGAM Florida Investment Seminar which you can attend free as a multi currency subscriber.