Cotacachi police are an integral part of the excellent Cotacachi health and safety service.


There are several police stations in Cotacachi. 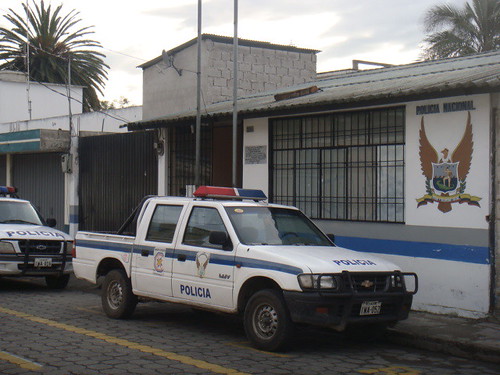 The police are friendly and helpful.

This is refreshing at a time when the police are often aggressive.  One delegate from South Texas told me last month  that just driving in the country, doing nothing wrong, except perhaps having a car with tinted windows.  He was stopped three times.   The stops, he said, “were not pleasant”… the TSA agents were on the verge of being rude… hostile… for no reason. He made the mistake… just once of trying to make a joke and was severely reprimanded by the officer.

Yet this may get worse.

PHOENIX — The raging drug war among cartels in Mexico and their push to expand operations in the United States has led to a wave of kidnappings, shootings and home invasions in Arizona, state and federal officials said at a legislative hearing on Monday.

The drug trade has long brought violence to the state, which serves as a hub as illicit drugs and illegal immigrants are smuggled to the rest of the nation.

Over all, in this city and surrounding Maricopa County, homicides and violent crime decreased last year. But the authorities are sounding an alarm over what they consider changing tactics in border-related crime that bear the marks of the violence in Mexico.

A home invasion here last year was carried out by attackers wielding military-style rifles and dressed in uniforms similar to a Phoenix police tactical unit. The discovery of grenades and other military-style weaponry bound for Mexico is becoming more routine, as is hostage-taking and kidnapping for ransom, law enforcement officials said.

The Phoenix police regularly receive reports involving a border-related kidnapping or hostage-taking in a home.

The Maricopa County attorney’s office said such cases rose to 241 last year from 48 in 2004, though investigators are not sure of the true number because they believe many crimes go unreported.

The violence in Mexico — where more than 6,000 people were killed in the last year in drug-related violence, double the number of the previous year — is “reaching into Arizona, and that is what is really alarming local and state law enforcement,” said Cmdr. Dan Allen of the State Department of Public Safety.

“We are finding home invasion and attacks involving people impersonating law enforcement officers,” Commander Allen told the State Senate Judiciary Committee, whose chairman, Jonathan Paton of the Tucson area, called the hearing. “They are very forceful and aggressive. They are heavily armed, and they threaten, assail, bind and sometimes kill victims.”

Chief David Denlinger of the State Department of Public Safety said that while tactics like home invasions might not be new in the drug trade, “they are getting more prevalent.”

“Border crimes are not just on the border,” Chief Denlinger said, pointing to posters showing weapons, drugs and people who had been held hostage.

This type of problem in the US could increase the forcefulness of the US law enforcement and make contact with the police less pleasant.

The Cotacachi police are not aggressive. 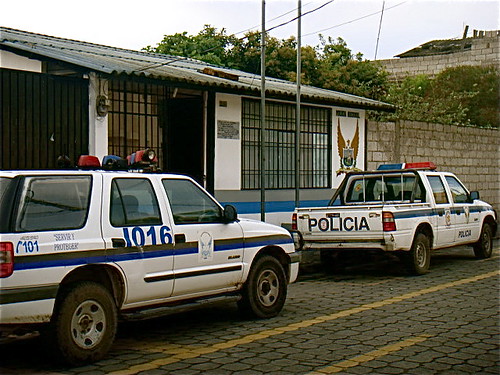 One guest at our hotel Meson de las Flores wrote about the Cotacachi police that gives a feel of how these law enforcement officers work with what he called “insistent persuasion”.   He wrote:

“Gary, I want to express my appreciation for your gracious hospitality on a recent stay at El Meson de los Flores. It was a relaxing three days.
“There was an incident on the street outside the hotel that might interest you. I was awakened one night by a ruckus on the street. Loud enough to prevent drifting off again I picked up my flashlight to check the time, 2:00 am. It sounded like several men were having an extra good time laughing and talking loudly.

A few minutes later I heard a vehicle approach and red light flashed around the bedroom walls.

I went to the window.

There was a pickup parked on the otherwise empty two lane street headed from my right to left (on the far side of the street to the hotel) opposite my window. The four door police pickup truck with three policemen stopped abreast the first pickup (close to the hotel) only a half vehicle length ahead of the first pickup.

One policeman exited the police truck’s left side standing under my window against the hotel wall watching the action holding a short barreled shotgun at ready.

The other two policemen mixed it up with four clearly smashed Ecuadorians in the middle of the street between the two vehicles. I witnessed the arrest progress.

The uproar increased (three more voices). Shortly the racket lessened. Then three men got into the police truck with two policemen. The third policeman got into the driver’s seat of the first pickup with one arrestee in the passenger’s seat and both vehicles drove off stage left.

I crawled into bed marveling that there had not been a show of force, only insistent persuasion. No swinging night sticks, sitting on the curb or face down on the street, handcuffs, rough shoving or body searches even in the face of resistance. Only patient urging with shotgun backup. Might this incident reflect favorably on the Ecuadorian temperament?”

The Cotacachi police are tolerant as well.

Cotacachi’s system allows for a human touch, for interpretation of the spirit of a regulation that goes beyond the letter of the law. For example the man below stands in one of the main intersections of the village and directs traffic. Dressed in the typical gray cameo of the Ecuador traffic police, he has his whistle, works all day, saves the community the cost of a stop light. He gets the job done. Yet he is not a policeman. He is not employed by anyone. He is handicapped and people just leave him to earn this humble living.  he helps… no harm done… so he is not bothered.

Until next message may your needs for police be few.

Join us in Cotacachi.

What others say about joining us.

Just wanted to write and thank you for such a fun, interesting and exciting time in Cotacachi.  From the moment we got there, till we left, we were treated so kindly, and there was never any stress.  Being with you, your staff and the other guests – it felt like a family reunion; like one big family.  The staff were every present, earnest and helpful, and always a friendly word.

What I thought was particularly interesting was the trip we took to the sacred springs of the indigenous.  I experienced a very strong healing, and still feel great.  I’ve had some chronic pain for a long time and it is almost non-existent now.  The shaman (or curandero?) said that the water had strong energy and would change our energy.  It sure did for me! Although I may be the only one, since I didn’t hear anyone else say they had this type of experience.  Also the two courses we took, the Vedic Astrology and the Imbabura Real Estate tour was beyond anything we expected.  PhD Astrologer, Blaine Watson (what an inspired guy!) had a great presentation and took time to address some individuals questions on the particulars of their charts – which was insightful and amazing.  I am so looking forward to have my one-on-one reading on the phone.

The real estate tour was a blast.  Merri was really in her element – she was the “energizer bunny” simulataneously directing the coach driver, the taxi following us, lunch arrangements, all while giving running commentary on the microphone about where we were, what we would be seeing and why certain places did not welcomed foreigners and which places were favorable.  There were low-end, high-end, city and country homes, townhomes, lots and parcels for development.  Her expertise and knowledge of 14 years of living there was very much appreciated  – and the lunches she arranged were really great– and so much fun as a group.

The food at the Meson de las Flores was fabulous, organic, pure, fresh and delicious.  As you have said about other guests, we too managed to lose a little weight in the short time we were there.  I think it was all the walking, the altitude and the low carb, low sugar food you served.  Every meal delicious, and the items for tea and the deserts were wonderful while not very sweet.  Oh, and the fresh juices were heaven!

As I’ve been telling my friends, the best things about Cotacachi were;  the people, the energy, the food, the weather, the quaintness, and the calmness.  The residents were so nice and we had no fears about walking thru the village and plazas at 10:00 at  night, which we did almost every night.

We had a blast and we thank you and your staff for all your efforts.

Merri, our webmaster and I have created a new course on how to build a web business with a webmaster.  Here is a special offer on this new course.

You can enroll in this special course for $299. However if you sign up for three courses in any one month.