Here is some important information about Cotacachi Ecuador safety facts.

A recent message outlined a Cotacachi robbery and this note expands on this as I would not want anyone to miss the beauty of Cotacachi because they were concerned about crime. Here is the entrance to one of the safe Cotacachi hotels (Rancho Santa Fe) you will see listed below. 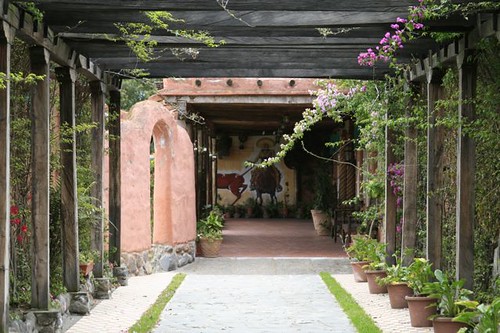 I mentioned the Cotacachi robbery in a message entitled Cotacachi Crime.   One Cotacachi resort owner read and wrote about that message:

Gary, I read with interest the report which your man in Cotacachi STEVE MERCHANT wrote you with concern to crimes in Cotacachi. Two points, which I believe ought to be considered for correction.

One is the fact that he is referring to a robbery AT A RESORT of about $ 40,000. That statement could be  damaging to any hotel owner, you mentioned that a “resort” was mentioned but not by its name, Lueva.  The owner of Lueva however, was in Mexico at the time of the robbery.

The other statement is that when Steve  went to the police in Ibarra  to report the robbery of the chicken farm, and had the opportunity to view the police book referring to about 180 or so crimes. But when writing it to you it sounds that 180 crimes were committed in or around COTACACHI since no reference is being made to the capital of the province. At least that is the way I was interpreting his writing.

The murder he is referring to within an indigenous community (caused by the fact that after a party where everybody got drunk, they started to attack each other with machetes and while one died several others were taken to the hospital for treatments) But the way Steve describes it to you sounds like the person was murdered for another reason and that might scare people away from Cotacachi.

You might not agree with my observations, but I thought I would give it a try anyway.  Best wishes from Cotacachi to the two of you. Take care.

I could not agree more with this resort owner and wish to add three important points about Cotacachi safety.

Here is another shot of Rancho Santa Fe. 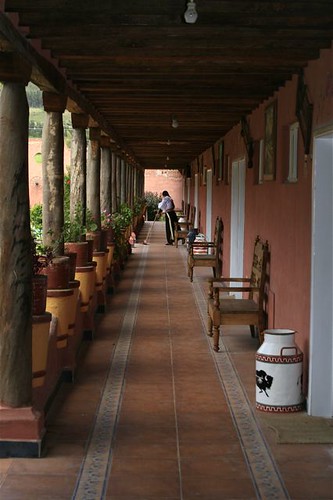 The first point about Cotacachi safety is about the geography of Cotacachi.  Cotacachi village which I normally refer to in our messages is just one of many communities in Cotacachi Canton (county). The village is just a small area of about 7,300 people. The county is a much larger geographic area and covers about 1,000 square miles in Imbabura Province (state) .

The village of Cotacachi in my opinion is very safe…as are the hotels and resorts there. These resorts and hotels include our hotel Meson de las Flores, the La Mirage Spa and Garden Hotel, El Arbolito and Rancho Santa Fe. These are the accommodations where we usually book our readers and seminar delegates. 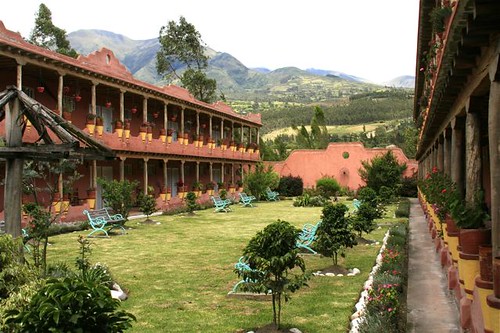 We feel safe walking to and from any of these hotels and resorts and any others that are in the village, day or night in Cotacachi Village. Meson de las Flores is right in the center of town (across from the police staion by the way).  This courtyard is enclosed. 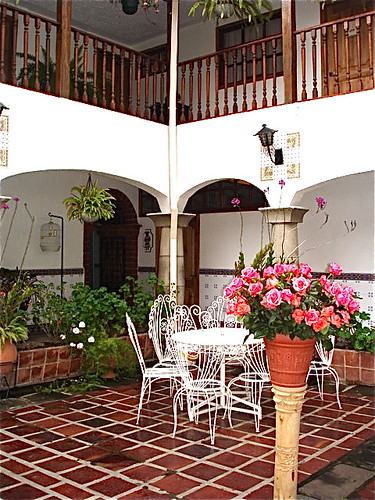 La Mirage is in a wonderful area and has 10 acres of fully walled exquisite gardens. 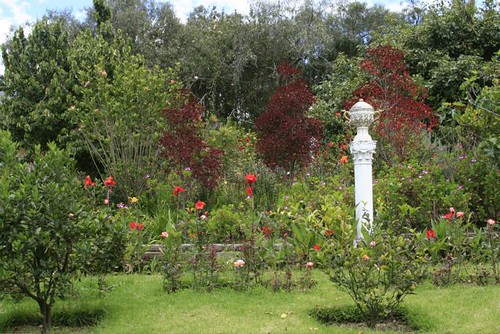 There is bird life of every type at La Mirage, from peacocks to hummingbirds…safe and serene. 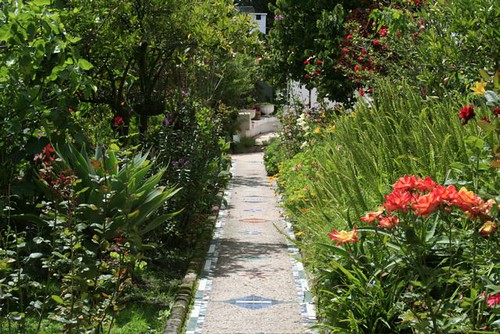 The spa is one of the best in the world…and at excellent prices.  See some of the treatments here. 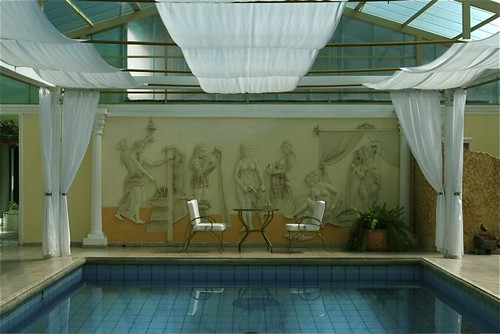 Here is the pool at La Mirage.  Merri and I have been friends with the owners for over a decade and take weekly spa treatments there, which are in our opinion the finest in the world.  We always walk to and from these treatments, enjoying the town and the walk.  We hold La Mirage to be the most beautiful, most delightful and healing place that we have ever known worldwide.

This leads to the second point… the place that was robbed is some distance outside Cotacachi village.  I normally do not make negative comments about any particular place so left out the name of this spa on my last message about Cotacachi crime.  I have not visited the spa for some years and did not even know it was still open.

This third point I hope puts Cotacachi safety in perspective.

The area of Imbabura is almost the same geographical size as Multnomah County, Oregon where I grew up in middle class suburbs between Glisan and Stark Street. My 86 year old mom still lives in the same house (for 48 years).   Merri and I were just there visiting mom.  During our short visit…three murders occurred near by.  I copied a December 1,  2008 article from the  Oregonian…Portland’s leading newspaper.

When Portland detectives began to canvass the neighborhood after the Nov. 23 fatal shooting of a 35-year-old man in a Southeast Stark Street apartment, they interviewed Roland Jackson Dir, who was walking to his home about a block away.

Six days later, on Saturday, homicide investigators were called to investigate the violent death of Dir, 54, whose body was found in his apartment at Southeast 155th Avenue and Stark Street.

The proximity of the two homicides, following the unsolved stabbing death of 37-year-old Amatha Mendive-Boyle, discovered Nov. 14 behind a nearby church, has area residents on edge.

Three murders in two weeks in just an area near the safe suburbs where my mom lives…all unsolved.  Police say that the murders are probably not connected which to me is even worse!

Compare this to one robbery outside Cotacachi village in an area that we do not consider safe…one murder from a group of drunks fighting in an area and situation where few westerners would ever be and 183 crimes in the entire county.

Merri and I feel safer walking in Cotacachi village than in our hometown suburbs. Yet I feel safe there in Multnomah County as well.  I would have no hesitation recommending that you take a stroll along any of the Portland sidewalks and bicycle paths.

There are growing number of bicycle paths by the way thanks in part to a fellow high school student…Earl Blumenauer.  Earl was two years behind me at Centennial High so as a lowly sophomore when I was a senior we did not speak much.

Earl went on to great stuff…becoming an Oregon Congressman who has pushed cycling as transportation.

Through his efforts Portland has expanded its bike lanes and routes throughout the city so people in Portland use their cars much less than the American average.  Blumenauer says this translates into savings of more than $2500 per year per family and that there should be a bicycle master plan for cities large and small.

There is speculation that Earl Blumenauer will be the secretary of transportation in an Obama administration. If so, expect even more biking.

One word of warning about this and walking around Multnomah county…nude cycling.  Here is a report, also from a recent issue of the Oregonian.

A Multnomah County judge has cleared a Northeast Portland nude bicyclist of criminal indecent exposure charges, saying cycling naked has become a “well-established tradition” in Portland and understood as a form of “symbolic protest.”

Judge Jerome LaBarre said the city’s annual World Naked Bike Ride — in which as many as 1,200 people cycled through Northwest and downtown Portland on June 14 — has helped cement riding in the buff as a form of protest against cars and possibly even the nation’s dependence on fossil fuels.

This is not an activity that is kind to the human form…so when you can find a sunny day to walk in Oregon, a greater worry than crime may become the shock from seeing a nude cyclist!

As an added note, one of the facts Merri and I are most proud to see is that not one of our many readers who have moved to Ecuador has purchased a car…we all walk or ride a bike…but not nude!

The point I hope you will see is that reports about crime get so blown out of proportion that you can let them ruin your life if you want.   There are so many things we cannot predict.  I could never have expected that crime would grow as it has where I grew up…or that one of the fellow students at my school would become a bike riding Congressman and maybe even a cabinet member…or that people would ride bikes nude in Oregon.  So live life to the fullest.  Keep in mind until last week, the 137-year-old Leopold’s Cafe, on one of Mumbai’s main shopping thoroughfares, was long a favorite place for tourists.  There are no guarantees and no way to predict how safety will change.

Crime is everywhere…know it and avoid it.  If you know where to go…most parts of the world have plenty of safe havens.  So whether you travel to Portland Oregon, Cotacachi Ecuador…or wherever..enjoy the journey, but also take care.

Until next message, may all your journeys be safe.

The course fee includes meeting at Quito airport (day before the course)…transportation (by group bus) to Cotacachi and back to Quito. Course fee does not include air are. accommodations, food or individual transportation.