Multi currency business ideas can help you get ahead in tough economic times. Many people worry about slowing global economic growth, yet our business has just about doubled in the last year.

In a moment, we’ll share why and a multi currency business idea.

They are mallards who arrived July 10, in the mail…tiny little duck guys and gals. 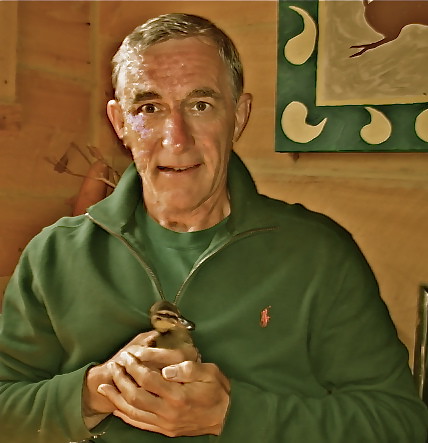 a dozen of them…who came in a cardboard box! 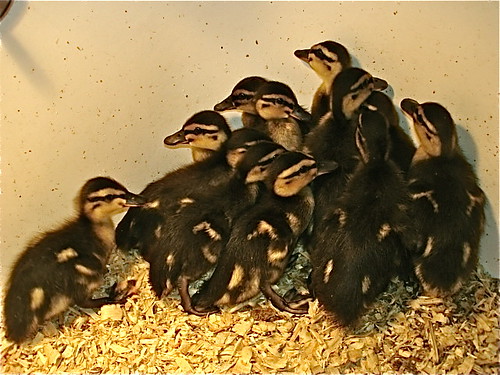 We raised them in a bathtub down at our guest barn, under a warm light, for the first couple weeks.

Then we moved them to a greenhouse that sits at the top of our sunniest meadow. 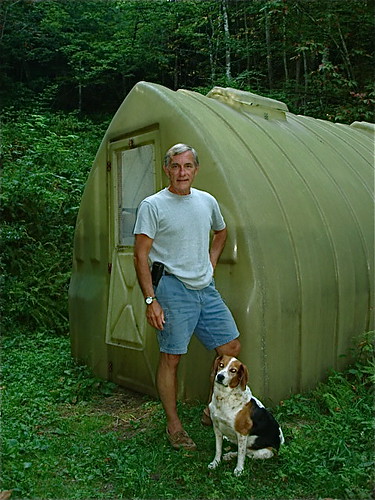 Last week it was time to let them try our their final home…the pond.

Here is the thing about these mallards. They act absolutely terrified of me.

I was the first thing they saw when they came out of their cardboard box. I have fed and watered them every day. Still when I enter the greenhouse, they act like the big, bad monster has arrived.

So it was on their big moving day. As I entered the greenhouse, they exited …fast.

Rather than heading down toward the pond they ran straight up into the thickest mess of brambles and thorns you can imagine…acres of it.

Have you ever tired to catch a dozen baby mallards in thick brush? Hours and a multitude scratches, cuts and bruises, later, as dusk set, I admitted defeat. The mallards spent the night in the woods.

As I lay awake worrying about them, I’ll just bet they were laughing, “See how we beat the monster. Yuck, yuck.”

Next day after more bramble scrambling, I managed to chase two into the pond. The rest continued scooting about in thick bramble…laughing I am sure.

Fortunately (for the ducks) this is summer and the predators are not that hungry. However we do have bobcats, fox, coyotes, mountain lions, neighboring dogs and many types of little weasels that eventually might figure out that almost a baker’s dozen of tasty morsels were in the woods…defended only by brambles that defeated humans…but not low slung, four legged fur bearers.

I finally in desperation resorted to the ultimate humiliation. I called the neighboring kids. “A dollar a duck for recovery”, I exclaimed!

An hour later and ten dollars shorter, the job was done. All were back in the house except the two mallards I had chased down to the pond.

This is where a transformation was taking place.

We have all heard the phrase “taking to something like a duck to water.”

Those two instantly became the perfect couple, transformed from squawking frightened ducklings, into something else…calm, serene, graceful…truly beautiful and at peace.

May I introdcue them in their new home…the pond. 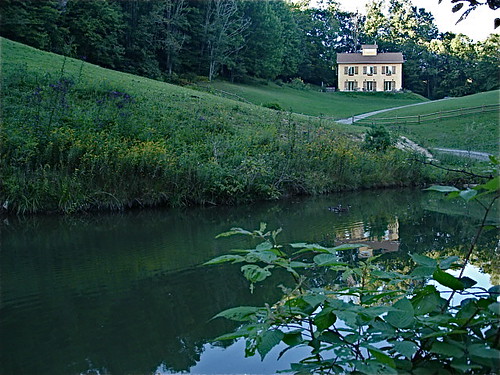 Here they are closer. 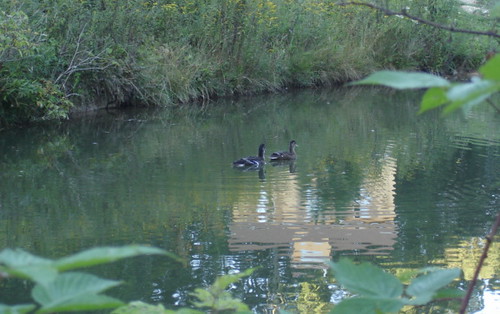 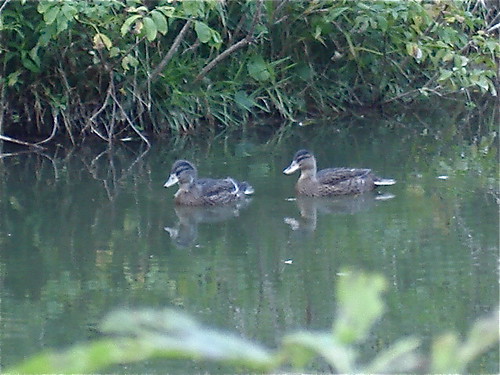 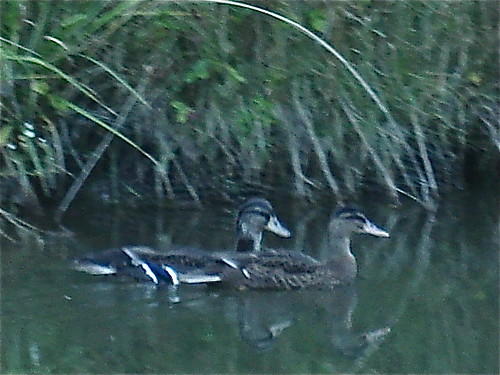 This sudden calming and burst of instant grace started me thinking,. I recalled how the first story in the second chapter of my book, Passport to Profit, which I wrote and published in 1979 was about ducks in ponds.

Here is that story entitled, “Having a Harbor.”

Doesn’t everyone dream of having some safe harbor for the ultimate escape? A completely dependable last line of defense, so that when everything else falls to pieces, one can drop back inside this cozy little shelter and enjoy a safe snug comfortable life. Certainly it is sensible to have one. In fact, to my way of thinking, anyone who doesn’t have quite a few safe harbors is not only playing a dangerous game he doesn’t have to play, he is missing one of the greatest contentment’s of life..confidence.

Duck in the Pond Theory

We would all have our own little partnership with our own little pond if we were ducks. The pond gives us water, food, shelter and peace. We, in turn, give it ducks. For what is a pond without ducks? We clean it, eat up unnecessary plants and in general keep everything in tiptop condition. However, every once in a while the hunters arrive. Very quickly the rules of the partnership change. You see, the pond as your partner has a limited range of powers. Whether it likes it or not, a new partnership is about to be imposed upon the pond. It will be forced to join in a hunter/pond partnership and part of the rules of that relationship is that the hunters can shoot at the ducks on the pond. This not only throws you, the duck, into an unrequested, unwanted hunter/hunted partnership but threatens to terminate quickly your duck/pond partnership.

It’s possible if you are not careful that you will become a diner/dinner partner on the wrong end of the fork. Logic dictates what to do in a situation like this. Since your pond partner is no longer dependable because the rules are about to be changed, you should take the initiative. Rule #1 of the Duck in the Pond Theory is in fact “Don’t be a sitting duck when the shooting starts”, so you’ve go to decide what to do.

All too often in real life, people get too upset with change to use logic. Their first reaction instead is dismay. They sit there wallowing in disappointment, shock and anger because their pond has let them down. Or even worse, they sit there looking at the gun barrels and choose to blind themselves to the reality of the situation, saying this is some sort of joke or the hunters are really looking for rabbits or the pond won’t let this happen.

Rule #2 in this theory is “be realistic”. If you don’t accept that partnerships change daily or ignore the limitations of your partner; you are not capable of deciding when to run for your harbor. You’ll lie to yourself and probably to your partner. This gums up the whole works. You’ll mess up a fairly clean machine by adding unwanted, useless nuts and bolts which do nothing but clog everything up.

The human mind/body partnership has an almost unlimited capacity to ignore its eyeballs, to adjust reality to match its desires. This inbred flaw causes humans to ignore reality and expect the world to revolve around them. Being realistic is accepting that no person, thing or partnership is indispensable or permanent. Realism is recognizing change and accepting it when no one is able to stop it.

If, by being realistic, you recognize that as much as you love your pond and as much as the gun barrels look harmless, that the shooting is not far away, you must act. You must get off the pond. Where do you go? Rule #3 of the theory is to be sure you have another pond to go to. I call it having a positive pond factor. The more places you have to go, the more positive your pond factor.

This book was about rise of the global economy and fall of the US dollar…two themes that have remained pretty consistent for 30 years.

Some investors have problems accepting these realities even today…but 30 years ago these ideas were really radical stuff! 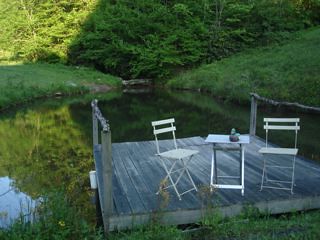 While sitting on the pond watching those little mallards, it occurred that a huge part of success in our business has come simply because we had one simple correct idea…the world is coming together. In the 1970s economies everywhere started to merge at a faster pace. US dominance, as the one and only major economy, started to decline. These trends have continued for three decades and are nearing an end game….so everyone is now catching on.

Perhaps this is why our business is still accelerating when many others are slowing down. This one simple idea has brought over 30 years of success.

When you develop your investing and/or business plan keep this in mind. Your plan can be radical but also simple. If it is in tune with the times, your multi currency ideas can create profits as easy as a duck takes to water!

Until next message, may your ponds be many and good ones.

Join me and Thomas Fischer from Jyske Global Asset Management in North Carolina to learn more about how global economic trends can make your ponds safer.

We’ll have lunch at the farm and enjoy the leaf change.  If you like you can stop and feed the ducks! 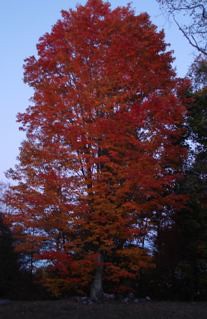